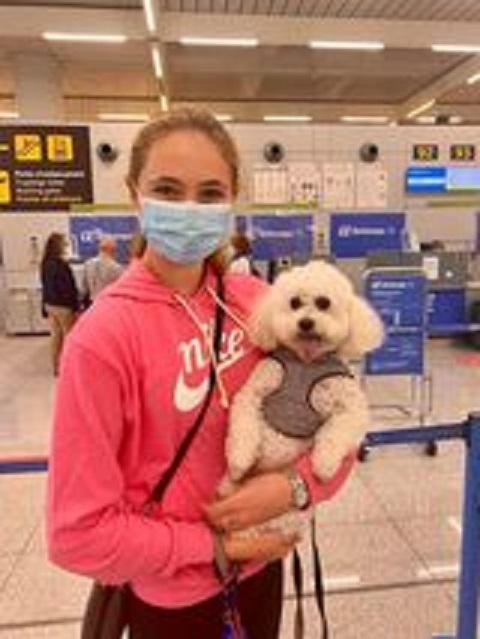 Vanessa Joy - sent in this picture of Coco from Alcudia. This toy poodle is another pet who has recently been on holiday and took the travelling in her stride. Last week we had two dogs who travelled by ferry, this time we have a beautiful poodle who went flying. Vanessa says Coco is a friend to all, likes singing and smiling.

Of her travel Vanessa says “This photo was taken going through the airport on a little trip to Menorca last month where she completed some of the coastal path with her hooomans. She enjoyed her first flight with air Europa who were very kind.” 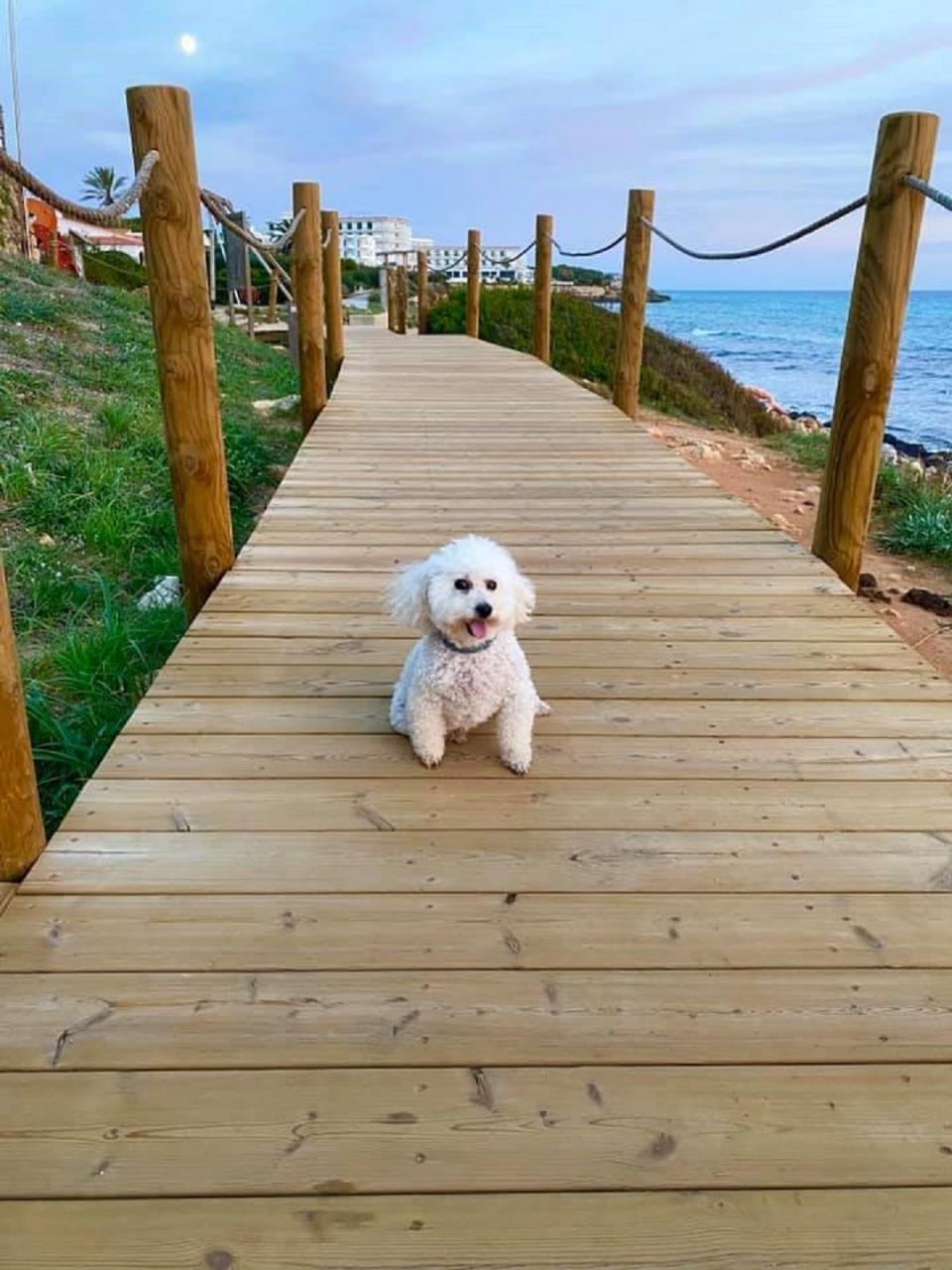 As they were preparing for the journey before their trip Vanessa said “ She saw the hand luggage coming out and she followed me around all day knowing we were normally going to be leaving her. However she popped in the car and her excitement at the airport was almost as if ‘oh that’s where you go with those bags’ ??. We gave in her passport at check in and vaccination details. I called the airline in advance and made sure that I had all things in order to be sure she would be in the cabin with us.

“ I expected to pay 25 euros each way as displayed on the website but they told me, as she is a resident she gets a discount and it was 9€ each way. She was in her mesh bag by my feet. She did super well and once we could take her out of the bag we did and she strutted her way through the airports either side.

Thank you Vanessa for sending this in and well done air Europa for giving residents discount for pets! 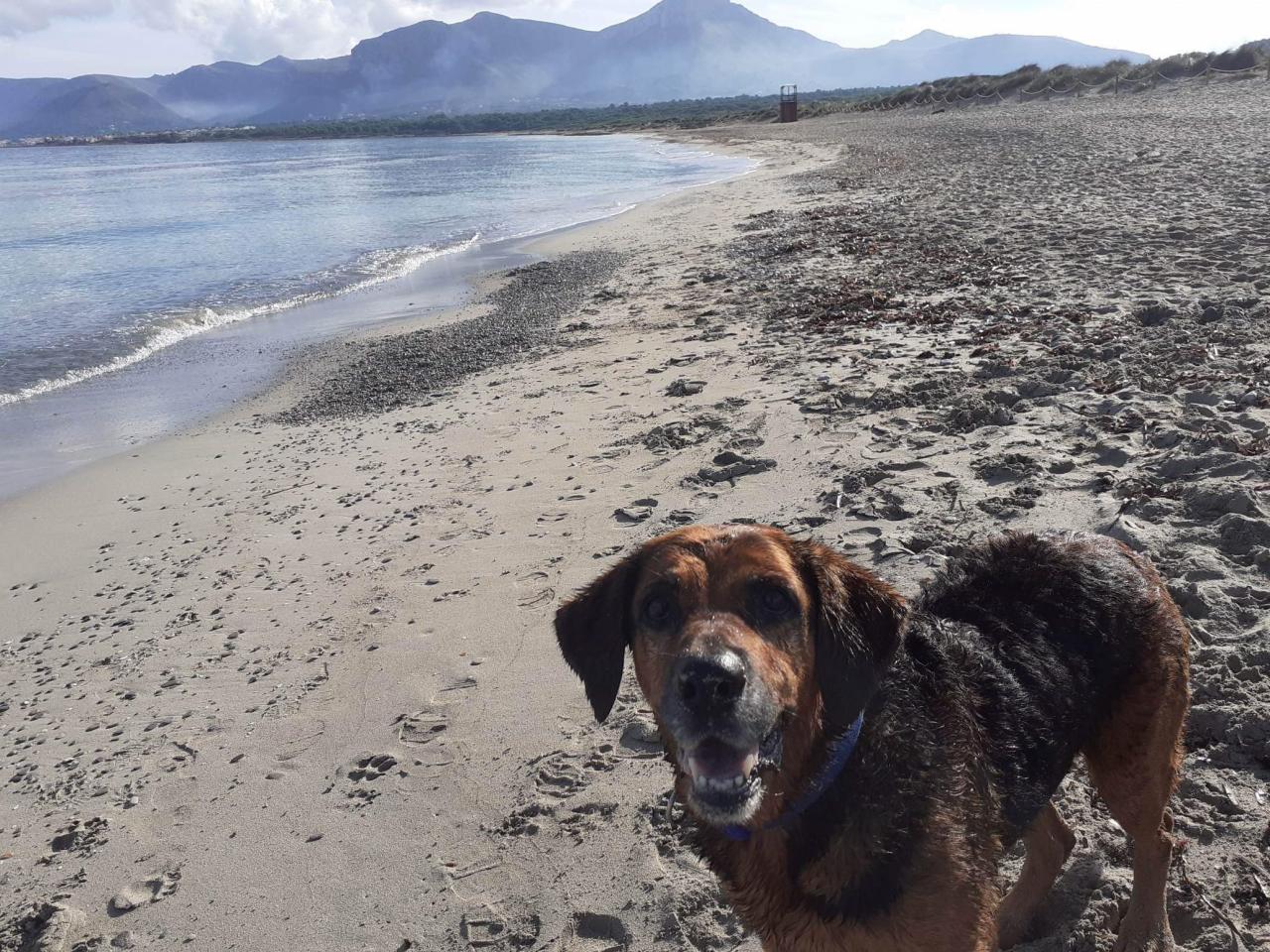 This beautiful natural beach lies in the municipality of Arta, which allows dogs on all of its beaches from October 1st to April 30th, this is a month earlier than other areas in Majorca.
Once again we park in Son Serra de Marina, but at the far end near the dog friendly restaurant El Sol. Walking east the small part of beach before the wetland area of Estany del Bisbe belongs to Santa Margalida so you should keep me towards the back on the GR222 hiking trail until you pass it. But once we are over it this wonderful wide, sandy beach becomes mine for over half of the year!

The beach of Arenal de sa Canova is almost 2km of golden sand with crystal clear waters and easy access into the sea. It can be windy here but even then it is a great walk, my hoomans laugh at my ears flying in the wind but it feels wonderful to blow the cobwebs away. 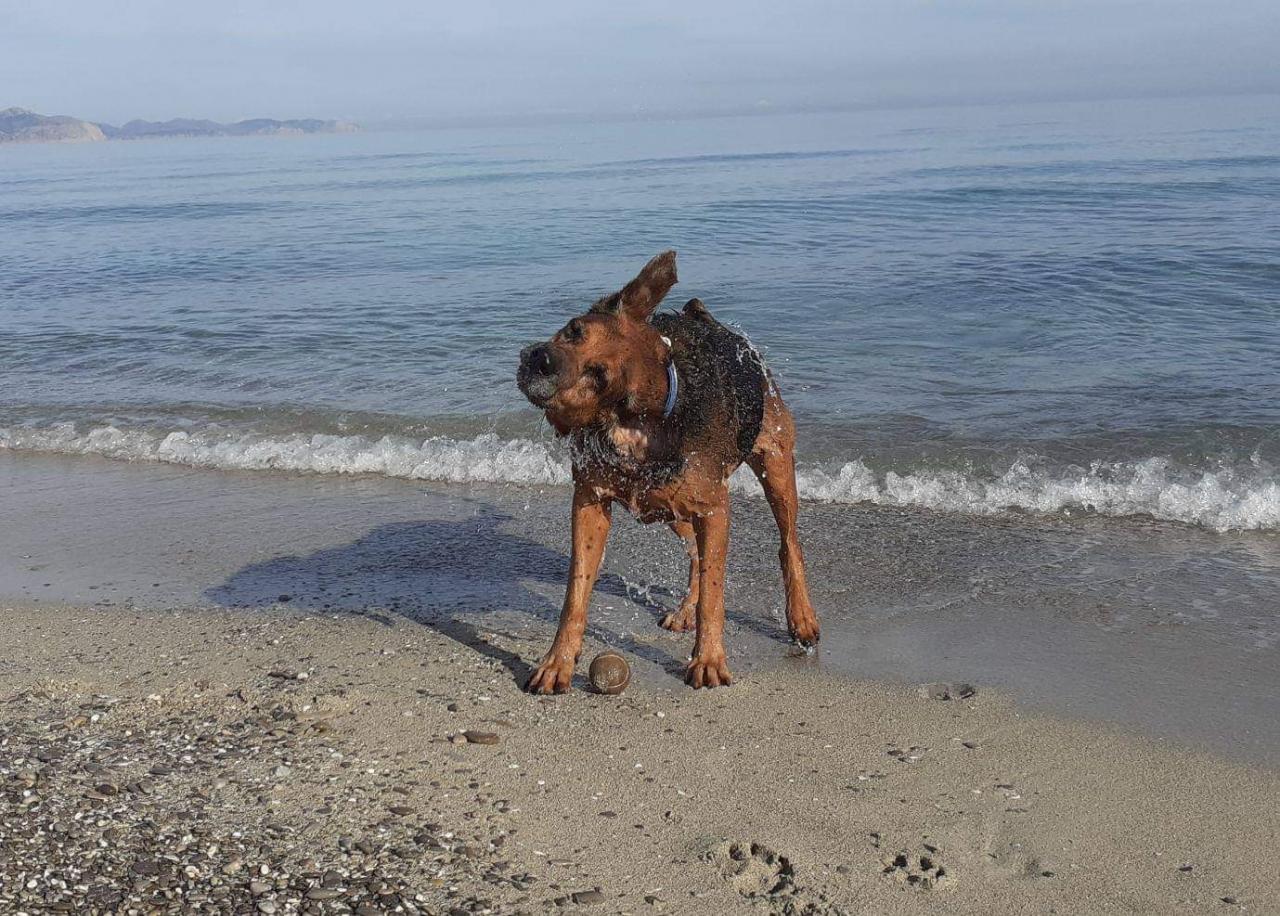 There are stunning views to the east of the Arta mountains and Parc Natural de la Peninsula Llevant and westward all the way across the bay to Alcudia.

In 1991 this area was designated as an area of special natural interest so please don’t let me trample over the sand dunes which are roped off.

On a warm sunny day my hoomans say to be aware that this is a nudist beach but I never wear swimwear so I fit right in. I don’t even have to wear my lifejacket here as there are no rocks to jump in from.

You can join the GR222 to walk on to Colonia Sant Pere, its about 8km return so don’t forget to bring some water for me and to carry a little black bag or two.

In Memory of Dear Friend Pau 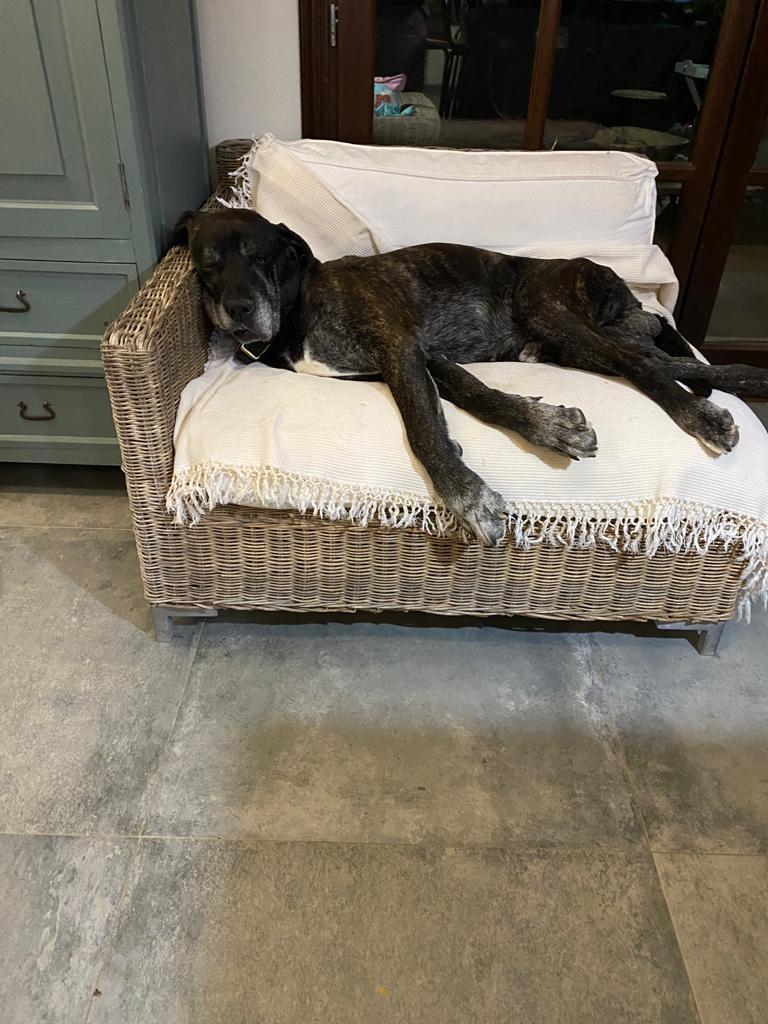 The world lost a dear and gentle soul this week, one that I feel honoured to have met. Pau passed on peacefully in the arms of his mum Deborah when she least expected it. As she says “life can change in the blink of a second.” Pau had a difficult start for the first 10 years of his life, he had been shut in a small yard and his only company was when someone arrived to feed him. He made every attempt to escape and did so regularly until his owner finally said they didn’t want him any more so he was put up for adoption and left in the local pound. Maybe he thought that was his destiny, to stand quietly at the back and watch the little ones get picked first but along came his future. 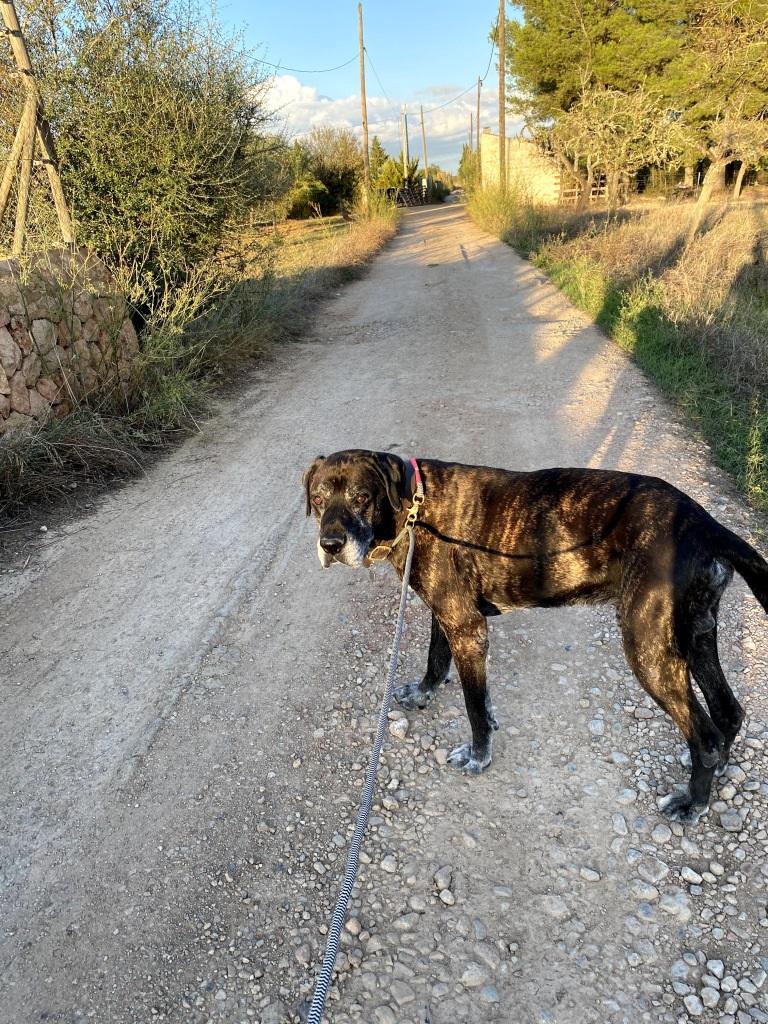 Deborah went to the pound asking to take the least wanted dog and with that Pau found himself in a new home with companions, Toastie a French bulldog and Tiger, a yorkshire terrier with whom he formed a very close bond. He did once again escape over a 3m fence and I hear he and the smaller dog he took with him had quite the party in their local village until he was taken once again to the pound. Deborah and he had a little chat about it when she went to collect him and I believe he never attempted it again. He certainly looked content and at home when I met him. I remember most that he had the hugest feet and you could hear him clattering towards you for a lean and a hug.

My husband used to bring him bits of sausage in his pocket and so we made friends pretty quickly. He was handsome and gentle and I´m sure has left a big Great Dane sized hole. RIP Pau.

With the festive season approaching this becomes an issue for many dog owners.
If we are lucky our dog was born towards the end of October and experienced fireworks at a very young age, this is for those that haven’t.

Ideally we should expose the puppy in early socialisation to all the averse stimuli they may encounter in their lives so this never becomes an issue, if we live in an area where there are a lot of fireworks at new years we may even buy some of them “off season” and expose the young puppy to this noise before they develop any fear of it (make sure to start in a large distance so the experience is not overwhelming).

With adult dogs this often is quite a bit more difficult.

As with any other behaviour related problem we have several ways to deal with the issue:
Work with the dog.

This means going through a desensitisation process which may last a fairly long time with some dogs and may include playing back aversive noises to them on the stereo or phone and rewarding them when they are not reacting (make sure to playback at VERY low volume).

If the dog is extremely sensitive to noise we should contact a professional as we may do more harm than good when trying to address the issue ourselves!

In general doing training (obedience / tricks) or scent games in conjunction with a nice relaxing walk will calm the dogs and also tire them out so they are generally calmer and more relaxed before the “event”. We can also manage the dog or the situation. If they are usually kept outside we can take them in for the time there is excessive noise.

We can put them in a room with the lowest noise level and also play soothing music or “white noise”.

As far as fireworks are concerned we should also reduce the visual impact by closing the blinds or drawing the curtains.

If we can we should stay with them and comfort them during this period as good as we can. In more severe cases we may want to think about leaving them in a reputable “doggy hotel” for the night, where they are not subjected to this kind of noise.

Although in recent years our knowledge about medicating dogs has improved I would still recommend this only as a very last resort and always in consultation with a dog trainer and a vet!

Resident discount for pets, love it!