If there’s anything I cannot stand it’s the bleating of Palma’s shop owners and their constant lament that the supermarkets and department stores are putting them out of business. But I also love local shops and support those in my neighbourhood — if they are open and if their prices are right.

Too many shop owners seem to think the public owes them a living and that we should happily buy their wares regardless of how much they cost. But most people I know shop where the price is right.

A new place near me was proof that shop owners can compete (and beat) the big supermarkets if they want to. But that means they have to open during the same hours as supermarkets and keep the quality of their produce up, while holding their prices down.

When this shop opened next door to a branch of a supermarket chain, I didn’t give them a very long shelf life…unless some of their prices were lower than the supermarket’s. Well, some of their goods did cost less — and I wasn’t the only one who was buying them.

But at this shop it wasn’t just the prices that were good — the quality was also upfront and they even had some fruits and veggies that weren’t available elsewhere. The shop was owned by two partners and one of them went to the big Mercapalma wholesale market every day.

On one occasion they had some nicely round quinces on display and I asked if it were some kind of new variety, because this fruit is usually misshapen and has lumps in the wrong places. It turned out they had simply rummaged around the pile of quinces and had picked out the best-looking ones.

One day I came across a variety of orange I had never seen anywhere. It was unusual in that it was slightly squashed at one end. It was seedless, very juicy, tasty and the flesh had superb texture. And at €1.19 a kilo the price was right. They didn’t know if it was some kind of new variety.

You don’t need me to tell you that oranges are good for us, because that’s something we learn from an early age. I must have been about seven when I first learned that oranges, limes and lemons contain lots of vitamin C.

From the early 19th century, I was told, sailors in the British Navy had to take a daily ration of lime juice to prevent scurvy…which was why the Americans and the Australian referred to Britons as Limeys. Despite the curative powers of lime juice, Limey was a slightly derogatory term.

What I wasn’t told was that vitamin C, apart from helping sailors on long voyages to keep scurvy at bay, also makes it easier for us to absorb iron from other foods. It can boost our circulation, protect us against heart disease and cut the risk of a stroke by a third. Oranges contain vitamin B6, which is essential for carrying oxygen to all parts of the body. Their calcium content helps to maintain healthy teeth and strong bones as well as the correct blood pressure. Research has shown that diets rich in citric juices can also help to prevent some cancers.

Other studies have shown that an orange a day may help to keep ulcers away. Research has also revealed that a daily glass of orange juice cuts the risk of kidney stones and rheumatoid arthritis. And an orange a day provides 12 per cent of our daily fibre need. 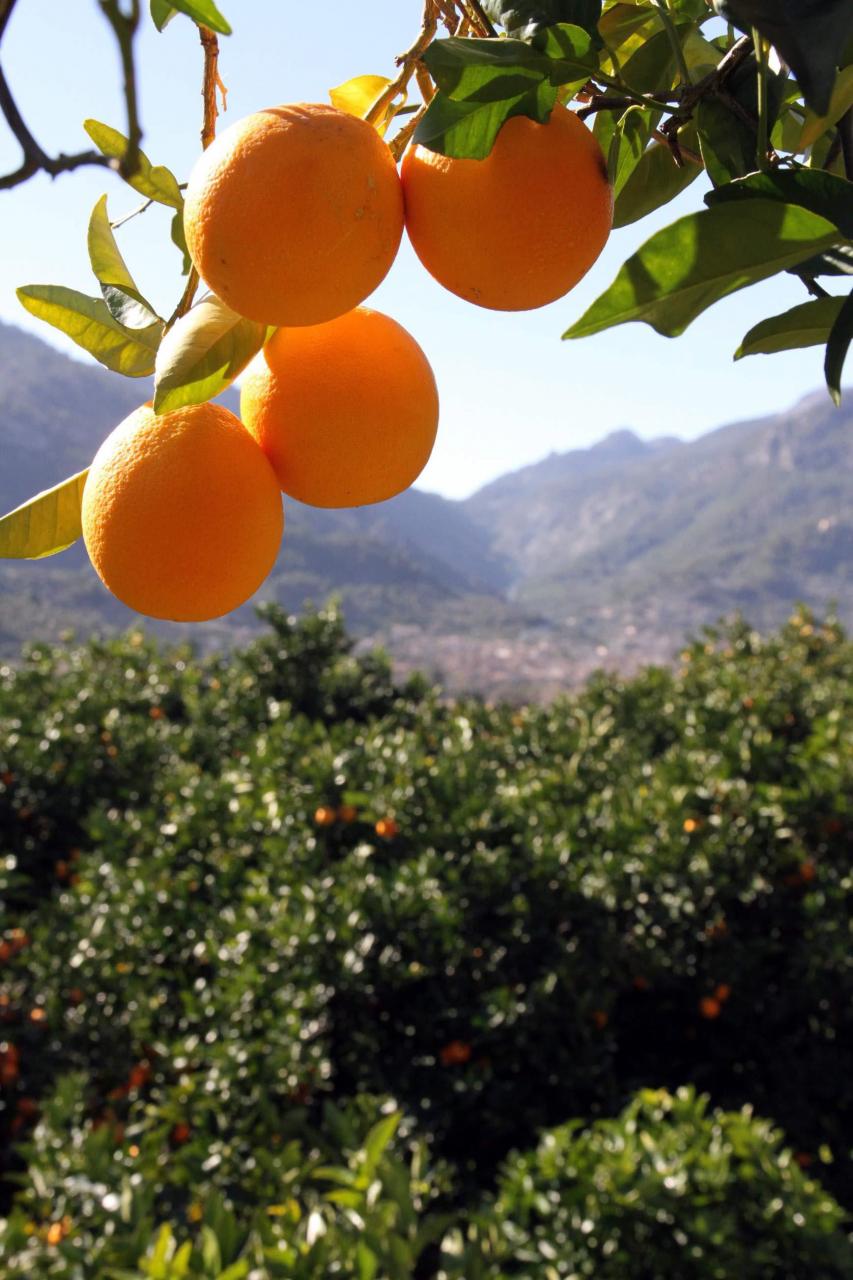 Spanish oranges are among the best in the world, and the Mallorcan varieties are among Spain’s finest, so oranges are always a good buy at local markets. Although the coronavirus has caused disaster and havoc in businesses of every kind all over the world, it couldn’t stop the export of Sóller oranges. Thanks to an intense online sales campaign, Sóller oranges trade was as brisk as ever throughout the past year.

The oranges you see in markets, shops and supermarkets marked ‘para zumo’ (literally, for juice) aren’t meant for the table because they have rather tough membranes that make them unsuitable as dessert oranges. But they are usually very juicy.

Although oranges are an essential part of the Spanish economy, Spanish cooks have never been inspired by them: no Spanish dish I know of gives oranges the top billing. Orange juice is sometimes called for in fish and meat dishes, and its roles in other recipes are also walk-on parts. 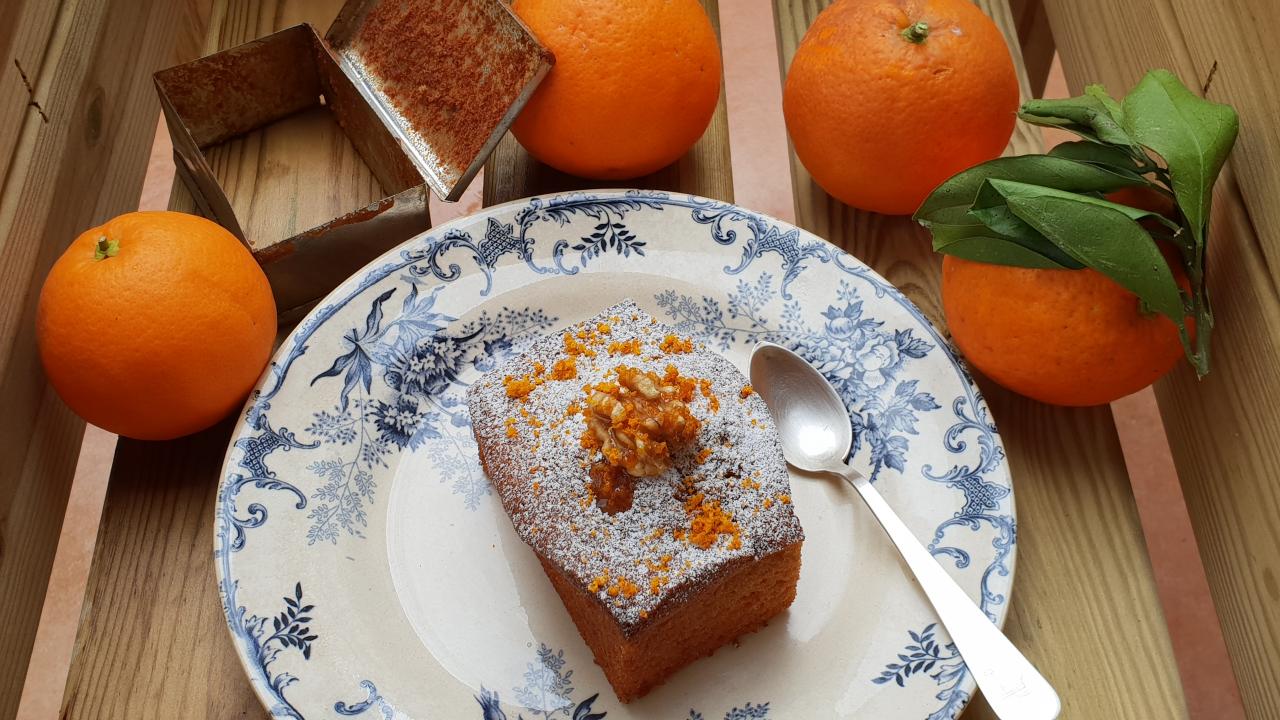 All kinds of pastry, especially in Mallorca, call for the use of orange juice. The pastry of most of Mallorca’s savoury pies includes a glass of orange juice as part of its liquid content. Orange juice also finds its way into custards and flans, giving these desserts a pretty colour and a refreshing taste.

A Spanish dessert in which the orange has a bit more than a walk-on part combines the fruit with egg flans. Make the egg flan mixture according to your usual recipe, using plenty of orange juice, and pour it into moulds with a caramel base. Cook them in a bain marie.

When they are cold, unmould them on to thin slices of orange that have been sautéed in butter and finished off with Grand Marnier or another orange-based liqueur. 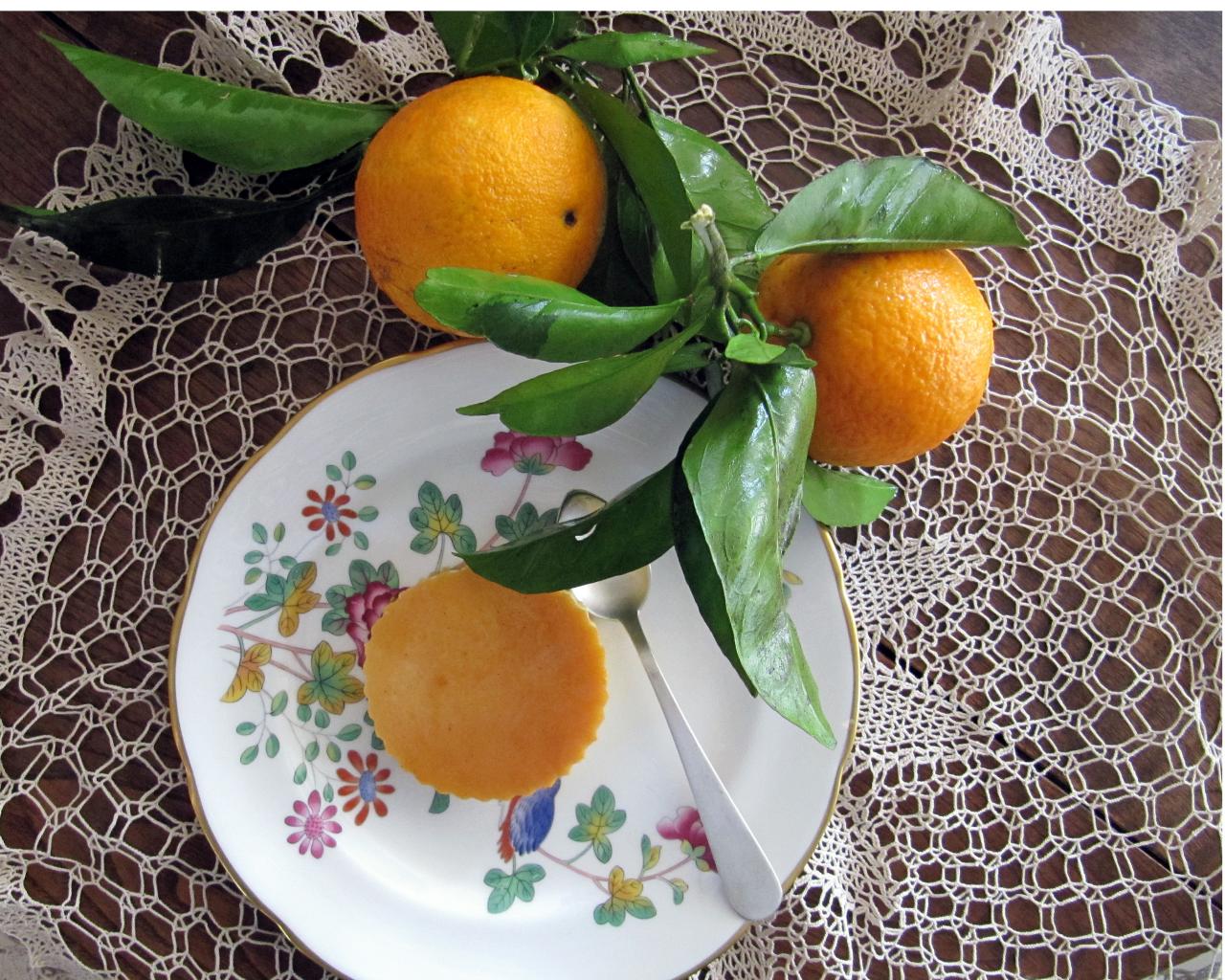 Wedges or cubes of orange can be added to salads to provide a tangy element — and the salt brings out the taste of the orange. Experiment by putting pieces of orange into your usual mixed salads. For a special little treat, make a salad with only tender spinach leaves and diced orange.

Oranges also pair nicely with onions, as in this salad. Peel three large juicy oranges, removing as much of the white pith as possible. Slice them thinly, removing any pips, and arrange them in a single layer on a flat serving dish. Slice a white onion (cebolla blanca) into tissue-thin rounds and place them on top of the slices of orange. Make a dressing with five tablespoons of virgen extra olive oil, one tablespoon of lemon juice, salt, pepper and half a teaspoon of Dijon wholeseed mustard. 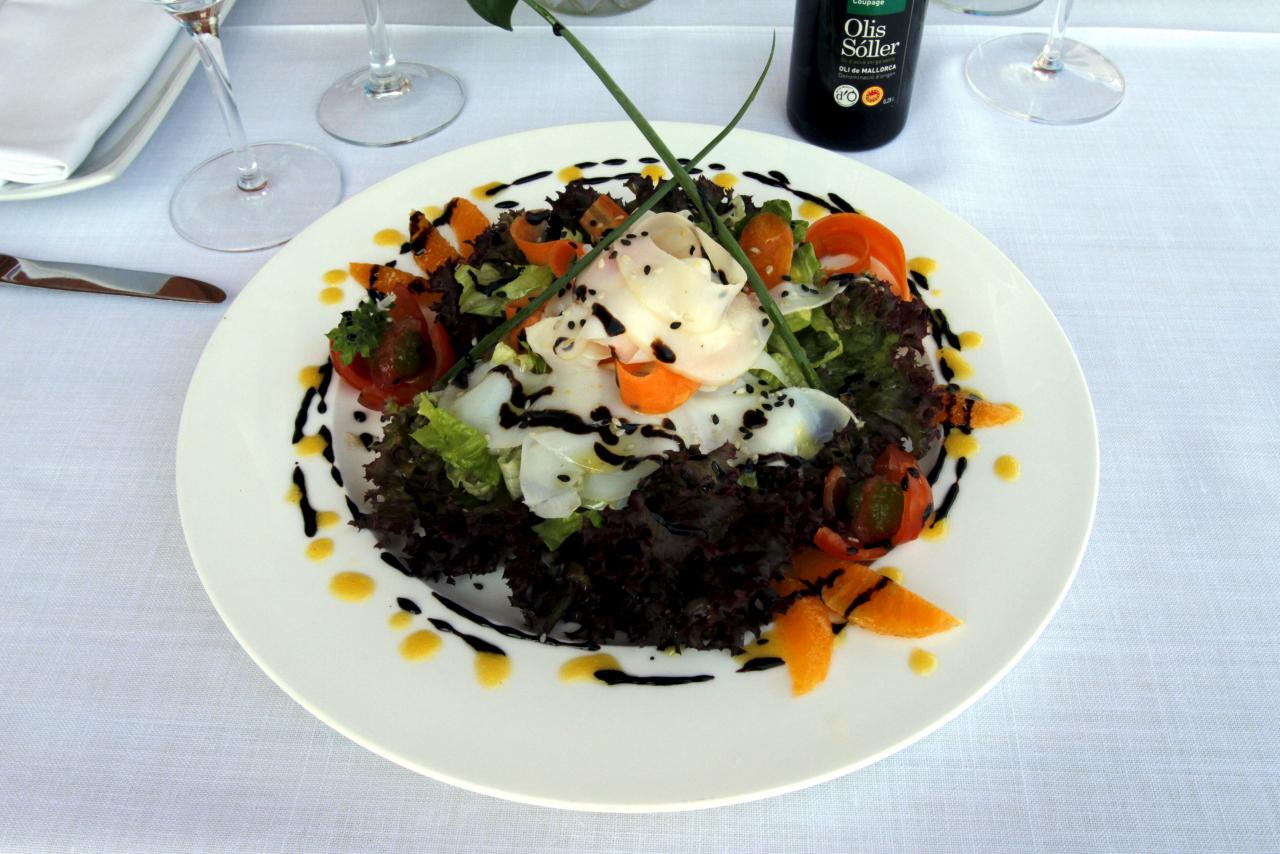 Spoon the dressing over orange-onion slices and leave for two hours. Just before serving, sprinkle on some finely chopped parsley. You could also use basil or mint, or any other herb of your choice.

Some desserts call for cubes of sugar rubbed with orange zest. This is done by rubbing cubes of sugar over an orange with a thick blemish-free skin. Gently rub the sugar cube over the skin on all sides until it has absorbed as much oil as possible. A medium-sized orange should be enough for two well-impregnated sugar cubes.

If a recipe calls for orange butter, make it by crushing two lumps of zested sugar cubes into softened butter. When making custard, you can give it an orange flavour by adding zested sugar cubes to the milk when it reaches boiling point.

Take the pan off the heat as soon as the sugar cubes have been added to the milk or the flavour will be spoilt. Some cooks prefer to add the zested sugar lumps to the hot custard, stirring constantly off the heat until they have dissolved. 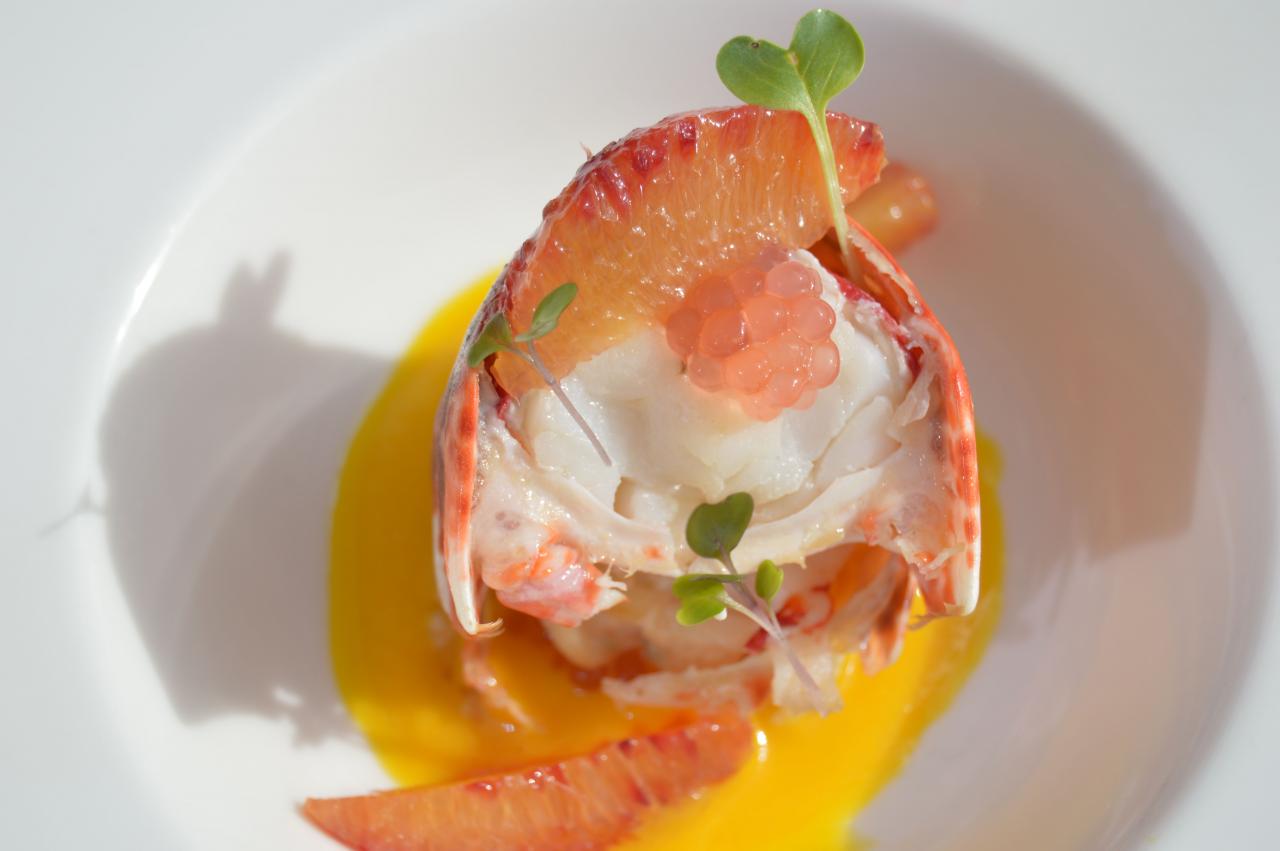 One of the simplest desserts I know is also one of the most delicious for orange lovers. Cut the ends off some good sweet unpeeled oranges and cut them into slices of just under one centimetre thick. Melt some butter in a large frying pan and sauté the orange slices on both sides over a moderate heat until they are just starting to brown.

Transfer them to a suitable flat serving dish and dust them with ground cinnamon to taste. If the oranges are not very sweet, sprinkle each slice with a little sugar. Serve with a small glass of Gran Marnier or Cointreau poured over crushed ice.

The apple is another of the healthiest and most easily attainable of tree-borne fruits. It’s very easy to cross-pollinate the apple tree, so although there were only a few varieties in ancient Rome, today there are more than 7,000. But only a tiny number are grown on a commercial scale.

If you do a round of municipal markets and supermarkets, you should be able to find about a dozen varieties, with colours ranging from green and yellow to a very deep red. The red Starking variety is deliciously crisp when you buy it, but after few days it starts to grow soft — never buy more than you will use over 2-3 day period.

If an English or American recipe calls for cooking apples, use Granny Smith which you may see labelled with a variety of Spanish phonetic spellings such as ‘Grani Esmit’. The French prefer to make pies and tarts with their reinette apples which are sold here under the name of ‘reineta’.

If you cannot find ‘reinetas’, Granny Smiths are ideal for making the classic French apple tart, which has glazed apple slices arranged on the surface of a well-flavoured and slightly tartish apple sauce. The acidic Granny Smith is suitable for any recipe that contains honey and spices. Try a compote made with Granny Smiths, lots of butter and spiced with ginger, cloves, cinnamon or cardamom.

The Granny Smith is ideal for doing baked apples, an easy dessert to make and have in the fridge for impromptu lunches. You will need: 4 medium-sized Granny Smiths, 50 grs brown sugar, 50-100 grs sultanas, 4 cloves, 40 grs butter, a little cold water.

Pour in enough water to cover the base of the baking tray, cover, and bake in a slightly less than moderate heat for 35-45 minutes, or until tender. Serve with golden syrup, custard or cream. You can also try these alternative fillings:

Currant & Lemon: Mix 50 grs currants with chopped flesh of half a lemon and 30-50 grs brown sugar.

Orange & Cinnamon: Chop flesh of medium-sized orange and mix with 50 grs granulated sugar and half a teaspoon powdered cinnamon.

Honey & almond: Blanch and chop 60 grs almonds and brown in butter. Fill centres then top with liquid honey. Add a little honey to the water in the baking dish.

Apple stuffings are ideal for chicken and pork. This one for roast chicken will keep the bird moist and flavourful. Sauté two tablespoons of minced onion in four tablespoons of butter until soft.

If you like a touch of sweetness in savoury dishes, try this apple and orange stuffing. Mix three cupfuls of fresh breadcrumbs with one cupful of diced Granny Smith apples, two tablespoons brown sugar, 50 grs seedless raisins, four tablespoons melted butter and 200 mls orange juice. Season to taste with salt and pepper. The best bread for these stuffings is the Mallorcan pan moreno.