"I bought some superfresh monkfish tails this week"

This recipe is simple, Mediterranean food at its best and I love to cook this dish for friends and family and just serve it at the table | Marc Fosh

My local fishmongers stall was a fairly depressing place when I was growing up in the outskirts of London. You could smell it long before you approached the corner where it stood. As a young boy I was probably drawn to it because I had no real idea what fresh fish actually looked like.

Later, when I became a chef, I realised I was not going to find out at my local fishmongers. The different types of smoked fish and maybe a few plaice or cod fillets had usually seen better days and could hardly be classified as fresh. Bizarrely, the fishmonger invariably had furry rabbits dangling from hooks in one corner, but that I guess, is another story…

Thankfully things have changed so much these days; I go to my local fish market in Palma and it fires me with enthusiasm and inspires me to cook with all that fresh seafood on offer.
The vivid colours, the bright reds of the huge Mediterranean prawns and scorpion fish, the glistening silver of the sea bass and grouper fish and the sheer variety of wired and wonderful sea creatures in the tiny stalls dotted around the market never ceases to amaze me.

I bought some superfresh monkfish tails this week. I know monkfish isn’t known for being the prettiest of fish, with its mottled skin, huge flat head and gaping mouth filled with menacing teeth.

However the flavour is sweet and mild and the flesh is firm and almost ‘meaty’ in texture making it a popular choice on menus. It usually comes skinned and filleted with the pinkish membrane stripped away; if this hasn’t been removed, pull it off before cooking or it will shrink around the fillet making it twist. 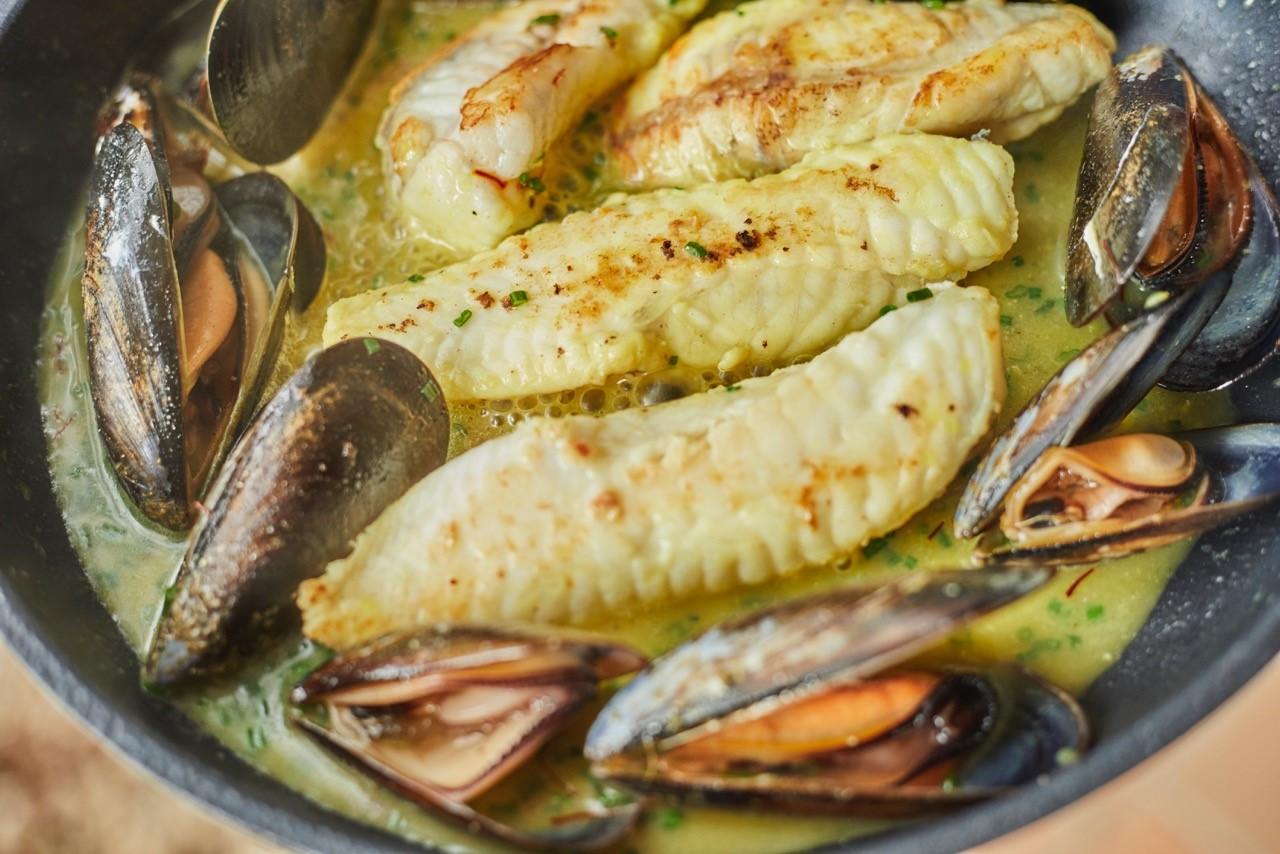 This recipe is simple, Mediterranean food at its best and I love to cook this dish for friends and family and just serve it at the table. It think it works best with small monkfish tails but you can also cut a large fish into steaks.

Heat the olive oil in a large heavy saucepan over a medium heat, add the monkfish and sear for 1–2 minutes on each side, then remove and set aside.

2 Add the onion, garlic, saffron and paprika to the same pan and cook for 2–3 minutes, stirring until softened.

3 Add the tomatoes, white and fish stock (bouillon) and cook for 15–20 minutes, stirring occasionally, until the sauce has reduced and thickened.

4 Add the mussels (ensuring they are all tightly closed) and monkfish, cover with a lid and cook for 5 minutes, until all the mussels are open (discard any that have remained closed).

5 Season to taste, sprinkle with chopped chives and serve immediately.