Wild Mallorca: Where is that squealling Pig?

This week, I am going to feature a species which is a well camouflaged skulker, easily missed but packed with character - the shy Water Rail (Rallus aquaticus). The genus name comes from ‘rallus’, the Latin word for thin, which relates to the ability to literally compress the body to allow it to move through the dense vegetation. The species name is the Latin word for ‘living by the water’.

Considered a delicacy by the Romans, it is also featured in wall paintings in Pompeii so it must have had some significance. Fortunately, the Legions under Quintus Caecilius Metellus (123BC) have left so they are no longer hunted for food, although I wouldn’t be surprised that they have to run the gauntlet of the hunter who unfortunately still exists here. For those of us however that enjoy nature, this species is a real gem and makes a great addition to any day list.

In the night time, one may come across a strange ‘kipp kipp’ call from within the marshes, and be left wondering what it is, and in the daytime the same species will make a squealing and grunting sound which sounds like a Pig in distress. It is a strange call and both are made by this common resident, but seeing it can be a different matter. Their plumage, slow movements amongst the reeds and small size make can make them a hard species to see.

The wingspan is 38-45cm with a weight of 100-140g. On occasions they will venture into the open to feed on the muddy margins or to sun itself, where its slender and agile form can be appreciated. When walking through the reeds it adopts a slow walk where it will ‘freeze’ at the hint of danger.

They are getting on a bit!

The oldest known fossils of an ancestral Water Rail come from the Pliocene Era (1.8 - 5.3 million years ago). By the late Pleistocene (2 million years ago), the fossil evidence suggests they were present across most of their range, with over thirty fossil records from Bulgaria and others across Europe too. In Britain, during the severe winters of 1963-1964, they were reported in some gardens at bird tables where they were actually observed killing small birds for food. Incredible. 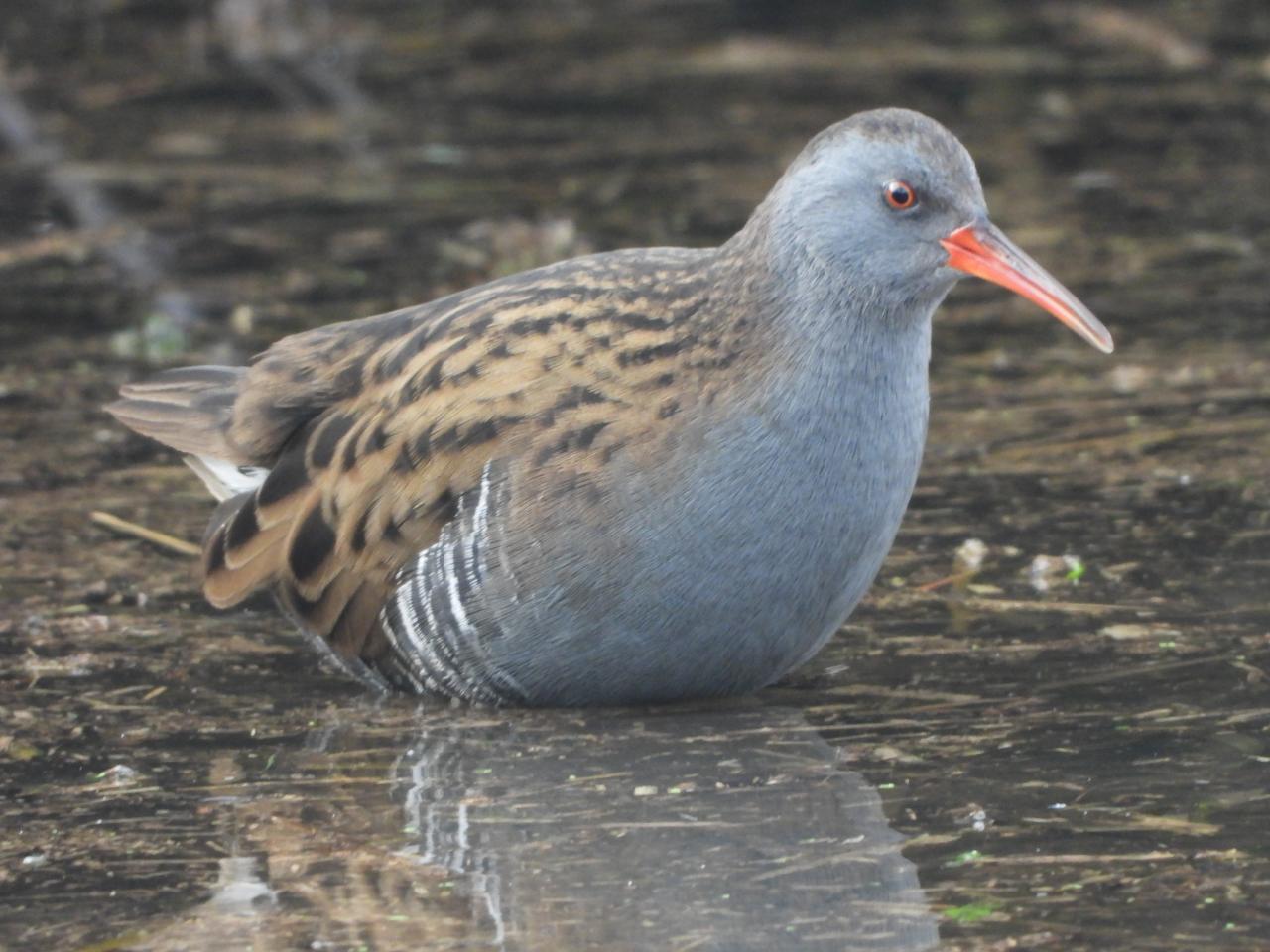 They nest on the ground in thick vegetation near to water, making a cup shaped nest, where anything from 6-11 glossy off-white eggs are laid, with reddish-brown spots mostly at the blunt end. The Albufera Marsh and the salt pans of Sallinas de Llevante are the best sites to see this species (if not to hear them), with the Albufereta Marsh, Tucan Marsh (both in the north) also being reliable sites. I enjoy evening visits to a viewing platform off the coast road at Puerto Pollensa where several come in close amongst the waders that are getting ready to roost, and it gives a chance to listen to the almost eerie call. A few times I have had people ask what that strange call is?

The adult has a mostly dark-brown colouring above and plain slate-grey below. The dark flanks are strongly barred and the tail is noticeably white beneath. The plumage is quite beautifully marked and when seen up close in the open they really are a striking looking bird, especially with the red staring eye and slightly downcurved, slender red bill. Both sexes are similar with the female being slightly smaller with a shorter bill. Sometimes a Water Rail that has ventured into the open to feed will suddenly run at great speed into the safety of cover upon danger approaching.

The juveniles are browner than the adult on the underside and have a brown bill. In flight, the long legs and toes trail quite conspicuously.
Patience is certainly needed when looking for the Water Rail, but I find at the salt pans that they can be seen more often along the first section down towards the green pump house, where the edges of the lagoons on both sides may see several out in the open feeding, watching closely overhead for danger from patrolling Marsh Harriers and from around them where an opportunist Grey Heron will certainly try its luck at a free meal. Food for the rail consists of aquatic invertebrates, insects and plant material, which is why they do well in the marsh areas. 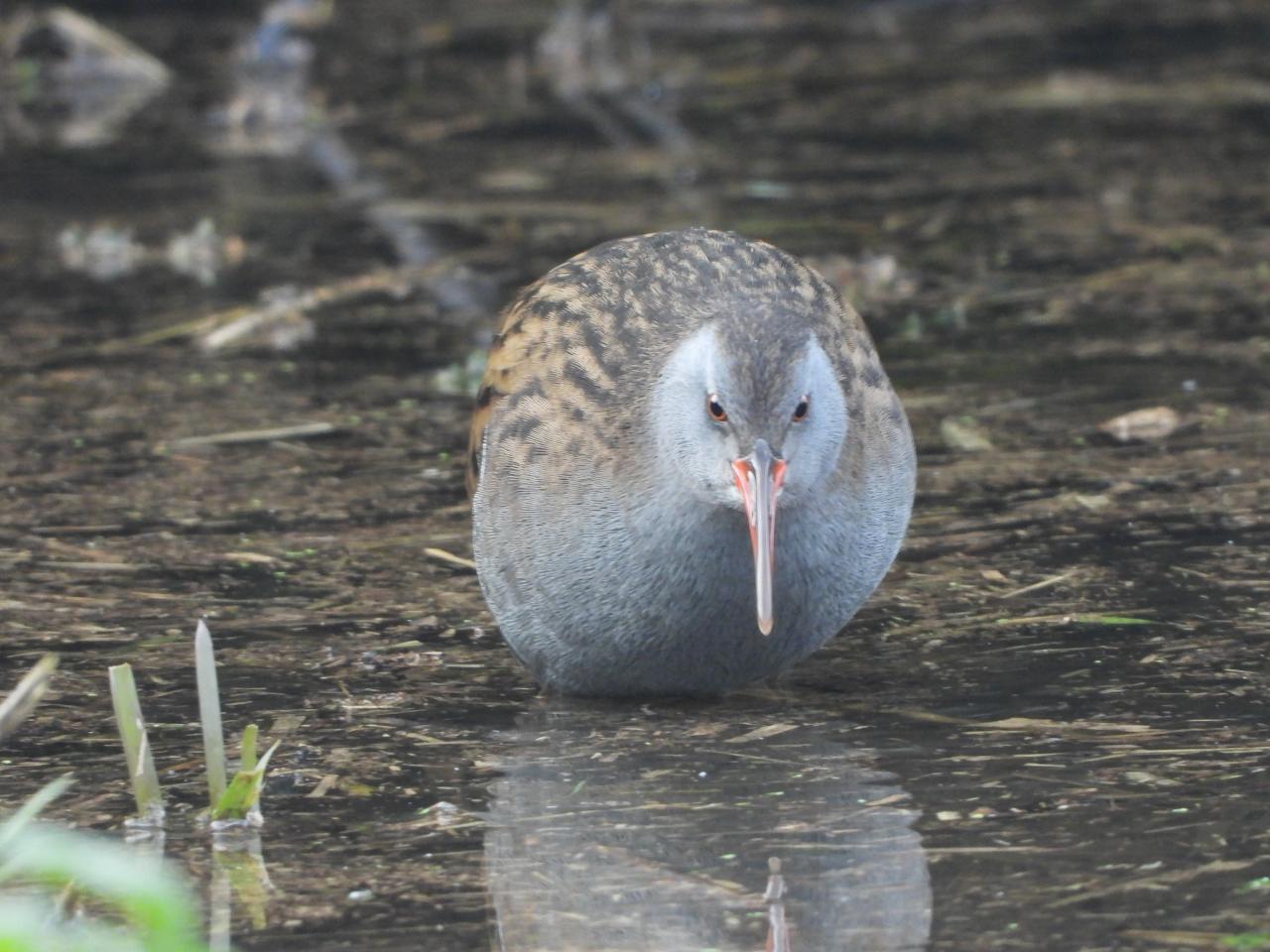 On other occasions, I will have been sat quietly in a marsh in the Albufera where eventually one has ventured out in the open to feed. Along the narrow canals can be good places to see them as well, but a Moorhen coming into view always makes me look again, how many times have I thought at first an emerging Moorhen was a Water Rail. What they lack in size they make up for in character, and when you see one, take a little time to stare back into that red eye, and appreciate this shy, elusive squealing wonder.