On Saturday June 24 the masks came off. And what a blessed relief all round! No longer compulsory to wear a face covering when out in the street, smiles appeared in the sunshine, and I started recognizing people again.

Here in Mancor de la Vall the locals have been exemplary in complying with the regulation, apart from one or two ‘special’ people who struggle with compliance and walked around with their token masks around their chins, necks, wrists, ankles and everywhere else except their mouths.

They were easily recognizable by their arrogance, unlike many locals who have not been so easy to identify, hidden away behind dark glasses, hats, caps, bonnets and of course masks, with not very much face on actual display to qualify recognition.

With most of the head and face covered, and many people having grown their hair, it’s not been that easy to place the person. Some have also put on a few pounds here and there so no longer instantly recognizable by their svelte frames and trim ankle! I have frequently passed people in transit through the village, and returned a distanced wave without really knowing who they are.

Even good friends and acquaintances have sometimes gone unrecognized. “Who’s that?” asked Other Half. “No idea!” But maybe they recognised us? Or maybe they just thought they did! After all, we have all been in the same ‘incognito’ boat and sailing under cover of Covid for the past fifteen months or so.

The other day someone walked up to us, and at arm’s length, handed over a large carrier bag of figs. At first, I had no idea who this generous benefactor was as the bearer of the bag was wearing a pulled down baseball cap, large sunshades, and an enormous face mask.

Using the gift of psychic super-sleuthing, Other Half quickly put two and two together and identified Señor Higo as the local friendly man who has been giving us a bag of figs every year since we moved to the village. 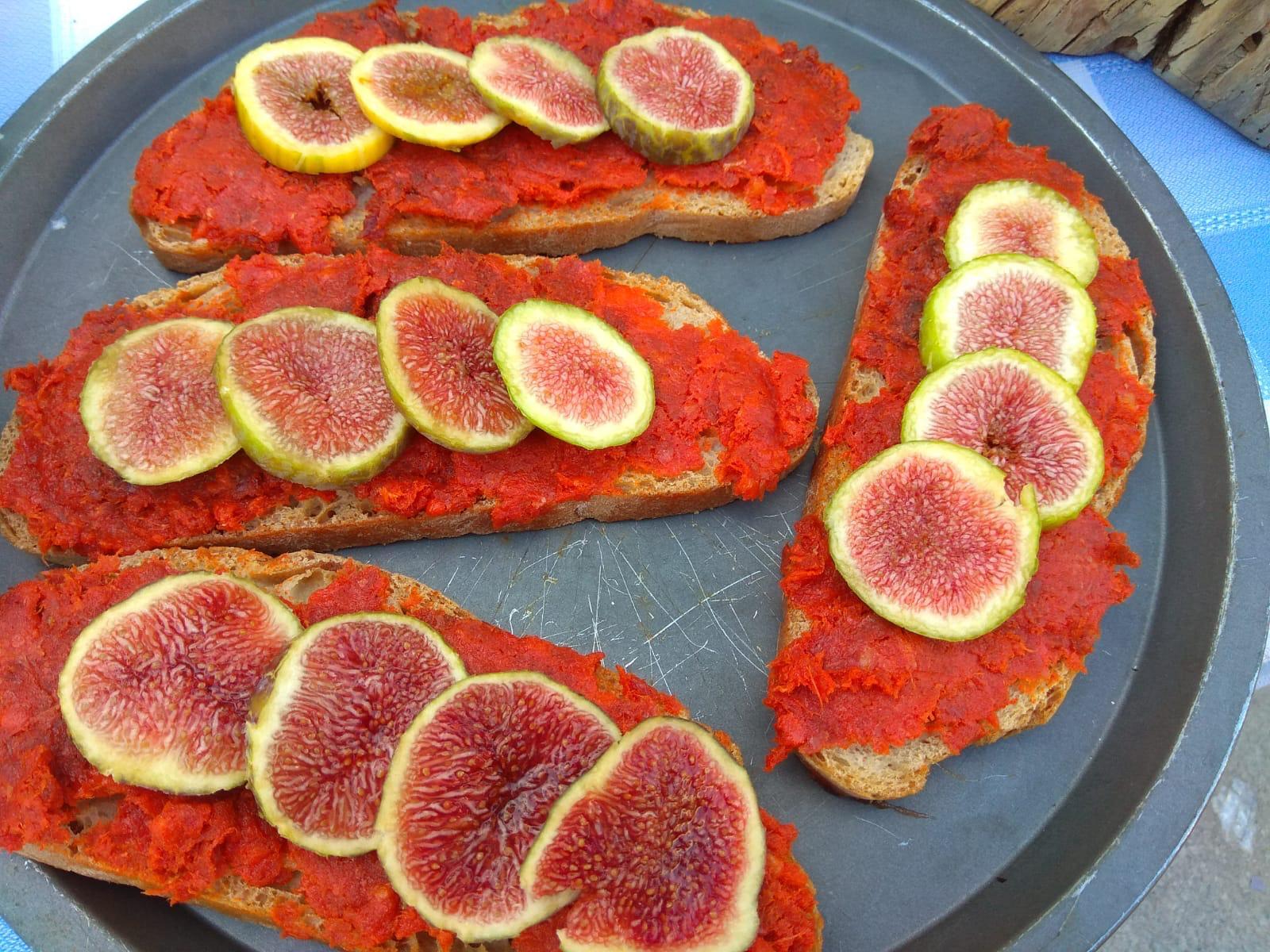 When we first came to live on the island, we bought a 15,000 square metre plot of land in the countryside of Moscari, hired an architect, and built a traditional stone house. It was glorious. We were living the ‘Mallorcan Dream’, complete with swimming pool, terraces, and everything we imagined our island home to be.

We also inherited an orchard of fig trees. Not something the previous land owners could simply pack up and take with them! They were ours, all ours. Visiting friends from the UK were convinced we were branching out into fig farming, and for a few brief moments it did cross our minds.

When the figs were in season, hanging plump and ripe from the trees, the first thing we asked ourselves was . . . “what on earth do we do with them all?” We had lorry loads! And a ripe fig has a very short shelf life!

OK! So the first thing we did was try to eat as many as we could, which by the very nature of their quantity didn’t make much of a dent in the harvest. I like figs. Other Half likes figs. But there are only so many you can eat in one sitting before you actually find yourself sitting somewhere else with more regularity than you might wish!

We tried to be inventive and used figs in all kinds of interesting ways. We made open tarts, jam, pickles, cakes, compotes, savoury snacks with Iberico ham and cheese, you name it we tried it. Naturally, we also gave loads away. But we still had figs coming out of our ears. We even tried the traditional Mallorcan method of drying and preserving them. But it’s a lot of work and a lot more complicated than you might think! 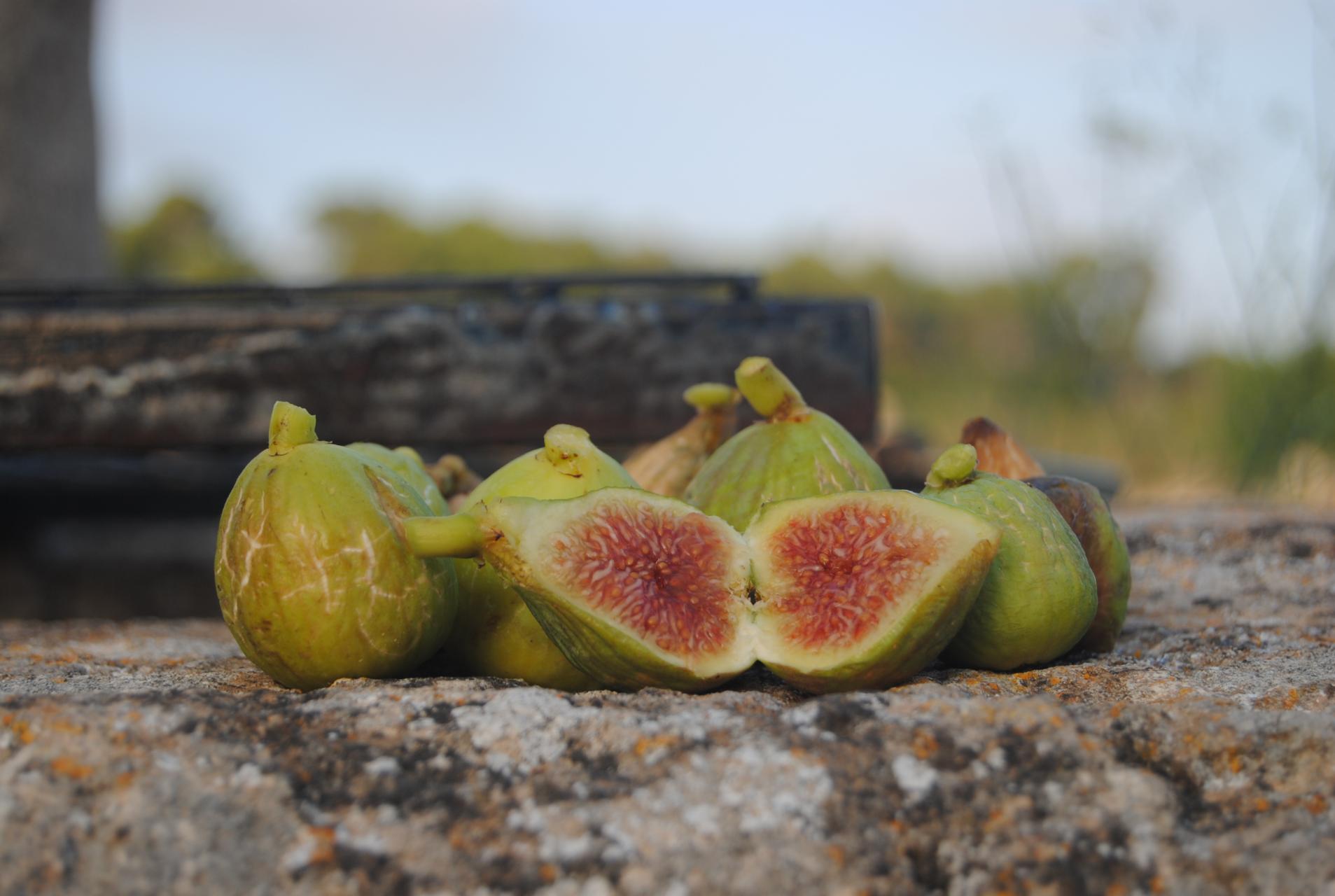 The technique of drying figs begins with picking the very best of the crop, before laying them down in the heat of the sun, on specially constructed wooden racks, designed to let the figs ‘breathe’. A good neighbour in Moscari actually presented us with some woven racks, fashioned organically from twigs and branches the traditional manner, which were almost akin to contemporary art installations!

Once placed on their little wooden racks, the figs have to be cared for and taken in each night to avoid the falling dew; then put back in again first thing in the morning. It’s a very time consuming affair but necessary in the magical process which turns fresh figs into a delectable dry-fest. A veritable fig for all seasons!

Each time the figs are turned they must be ‘pressed’ to flatten them. Ours tended to keep popping up again, but we were told that was quite normal. “Just keep pressing,” they said. “Keep flattening!” And keep drying until all the moisture has miraculously disappeared, which can be anything between seven to ten days, or more. I told you it was a long process before you end up with completely flat figs.

The completely mummified fruit are then blanched in boiling water for thirty seconds to kill all the bugs. Then surprise! surprise! they have to be dried out again in a low oven for a good hour or so. Finally, the picked, plucked, sorted, sifted, pressed, soaked, strained and dried figs are ready to be stored between layers of fresh fig leaves, sprinkled with anis liqueur and spiked with the chopped stems of ‘fonoll’ ( a wild, free growing anis plant foraged from the roadside ). Or, bottled in jars and preserved with anis liqueur, ready for Christmas or any time soon. These figs will seriously last for ages. And prepared correctly, are gastronomically gorgeous!

Our attempt, in retrospect, was executed with limited knowledge to the
‘precise’ quantities of alcohol needed in each jar! The anis liqueur used is 30% proof. No-one told me you only needed a sprinkling between the dried fruit to flavour the figs and thus keep them ‘preserved’. I discovered that the dried figs in our jars absorbed all the liquid very quickly, so kept adding more and more anis until the figs couldn’t absorb any more and were almost fit to burst.

Subsequently, one of my now notorious dried figs could knock out a horse for a week. We used to put my special figs out on to a plate for at least two hours before we wanted to eat them in order for the alcohol to evaporate! They were very intense, but nevertheless quite unique if you could hold your liqueur! They were brilliant with any cheese, but we preferred them best with ice cream which kind of masked the potent anis with vanilla, a great combination.

All the figs we couldn’t eat, use or give away sadly dropped to the ground and literally fermented at the foot of the trees. The aroma was amazing when we wandered down through the orchard, scenting the air with a good whiff similar to brandy. No wonder the sparrows sounded happy!

These days we don’t have fig trees, but people who do, are more than happy to give us a sack full, like the masked man who presented us with a generous bagful.
One of the simplest of all the fig dishes I created was a divine desert ‘au gratin’, which a Mallorcan friend said was the best pud he had ever eaten.

Method: Take as many super ripe figs as you like. Usually allowing at least three per person. Halve them and arrange artistically ( cut side up ) in a terracotta dish that will accommodate them all in a spiral formation, pointed ends facing out. Sprinkle generously with sugar ( brown or otherwise ) and dot with butter and small dollops of soft cream cheese between figs ( soft goat’s cheese is very nice).

Prepare in advance. When ready to serve, place under a hot grill until the figs and sugar are bubbling. Remove from grill. Sprinkle with chopped walnuts and drizzle the whole lot with runny honey and place back under the grill until caramelised slightly and bubbling beautifully. Spoon juices back over the figs and serve immediately with a side of Greek yoghurt, cream or ice cream. Delish! Bon profit!