They have spread north from the Mediterranean during the 19th century

The Serin is a genus of small birds in the finch family (Fringillidae) found in Europe and Africa. The genus was introduced in 1816 by the German naturalist Carl Ludwig Koch and the name is New Latin for ‘canary-yellow’.

I remember seeing my very first Serin’s at the base of the Boquer Valley along a stretch known as the ‘Pine Avenue’, and I was captivated by the bright yellow of the male in particular. They were a small, busy group, chattering away in the pines. It is one of those species that appear here and there and you never tire of seeing them. Serin is the French word for a canary, probably from the Latin word ‘citrinus’ which means yellow. In my hme country of Wales, Serin is the Welsh word for ‘star’.

It is easy to see how from a distance they can be confused with the Siskin (a winter visitor to Mallorca) and a species I will be covering more in-depth in a winter article. The Siskin although a little smaller, has fainter speckling on the belly (in the females and juveniles) and black on the head in the male.

Serin eat small seeds especially from plants such as Daisies, small catkins forming on trees and will quite happily eat the seed heads of Cabbages and other brassicas, so it is not unusual for gardeners to see small flocks in the autumn and winter if they have left some veg to go to seed. In fact, leaving plants, fruit and veg to go to seed may look a little untidy, but the local wildlife will love you for it.

In the breeding season, they defend small territories where they may even form neighbourhood groups and as a result become quite tame. In some areas, these groups can vary from a few pairs to over a hundred pairs per square kilometre. They have spread north from the Mediterranean during the 19th century. 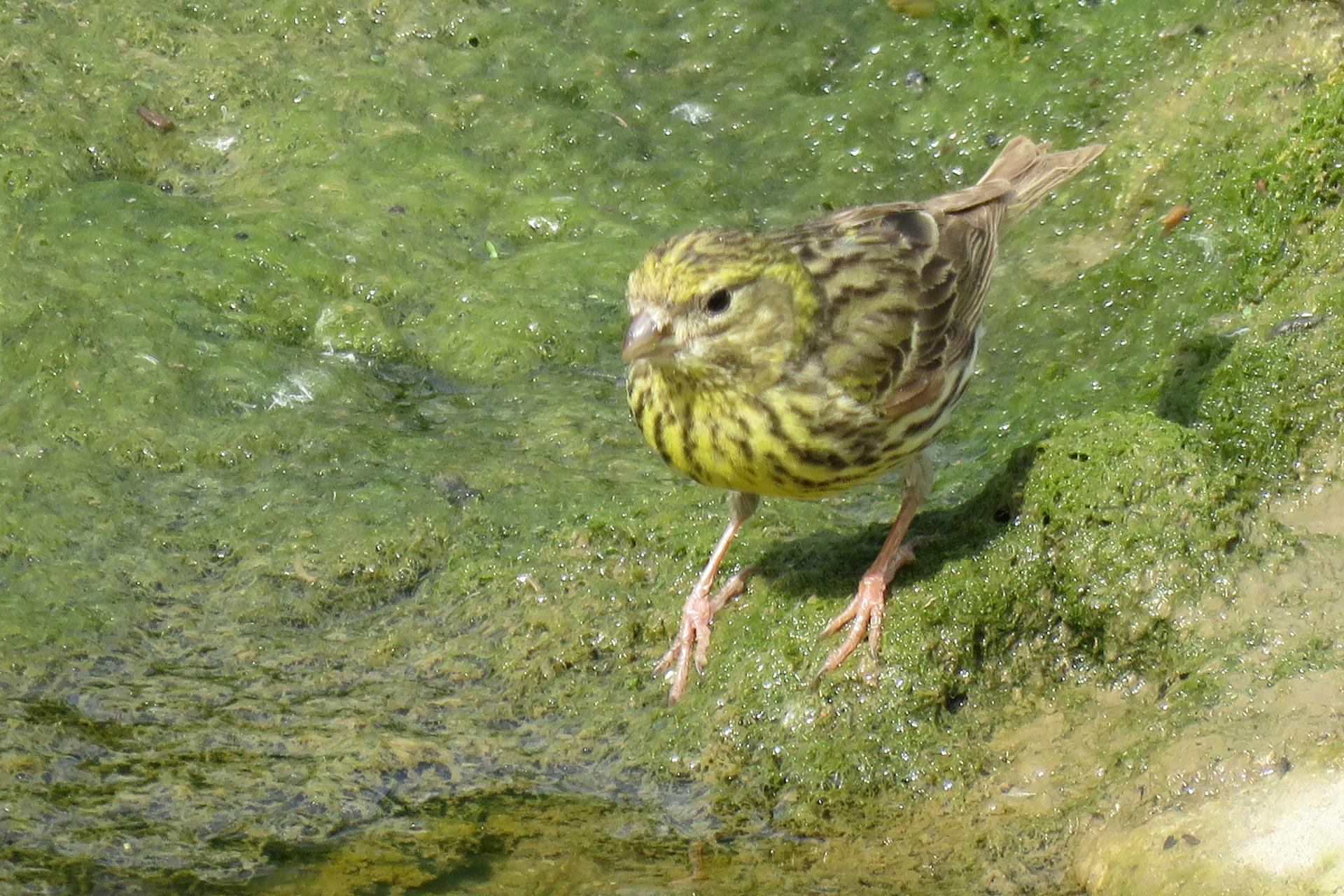 Serin’s sing throughout the year, and a breeding male will sing from a high perch such as a tree or telegraph pole then burst into a spectacular song flight, in an erratic course with slow, deep wingbeats, and even if the female is busy building the nest, the male will sing all day - it is one of the beautiful sides of nature which we all get to hear on this beautiful island. The voice itself is a distinctive ‘tirrliiiiilitt’ and the song is a rapid succession of chirps, twitters and jingles, quite pleasing to the ear. They are a tiny finch at 11.5cm in length with a tiny wingspan of 20-23cm.

They weigh a mere 11-13g, but what they lack in size they more than make up for in a vibrant yellow, with a great song to back it all up with.

Forest edges, parks, clearings, orchards, fields, gardens and vineyards all form their habitat, and they can be seen around urban habitation too. The nest however will be in a conifer, or a Lawson Cypress or even a fruit tree, where a small cup consisting of stalks is constructed, lined with moss and lichens. The nest can be quite well camouflaged and 3-4 bluish-white eggs with sparse spotting are laid.

These are streaked a rusty colour (mostly at the large end). This tiny finch is about the size of a Blue Tit, and the male is streaky with greenish-brown above with a bright yellow head., breast and rump. The males’ wings which are blackish-brown have pale fringes to the wing coverts showing as pale wing bars. The tail is deeply forked. Due to the yellow surrounding it, the black eye can look ‘beady’. They have a short, stubby bill typical of the seed eaters. 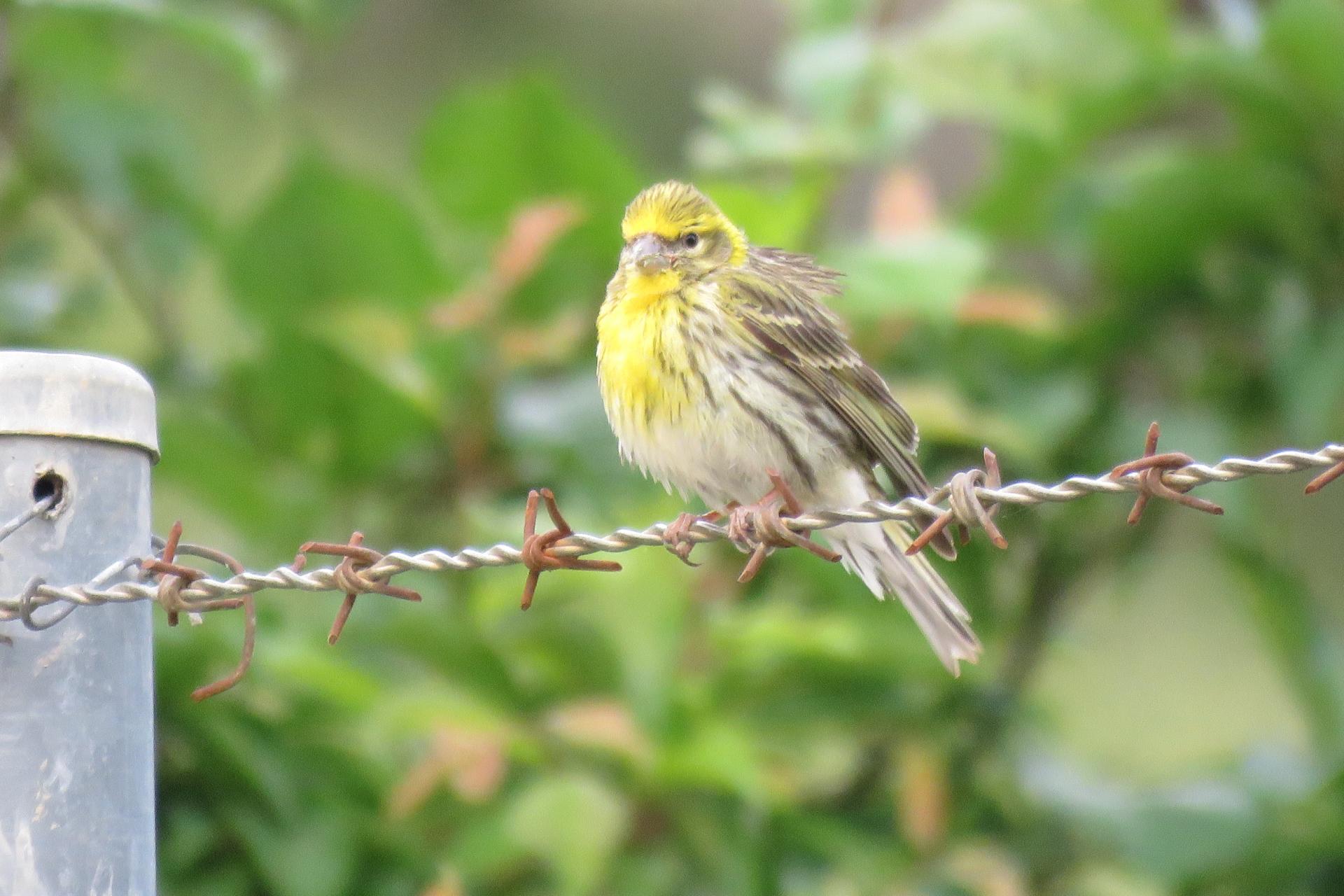 In the autumn, many finches will form flocks in great numbers wherever there are seeds to be found - the Serin’s amongst them. Fields that contain Thistles will be a chance to fuel up ready for the winter months ahead. The Crown Daisy will form nice seed heads by the autumn and these are taking advantage of by Serin’s and finches alike. It is a strong growing annual that flourishes in abundance on Mallorca from fields to roadside verges, with large flowers 4-6cm across.

They flower from March to June although I have seen them flowering into July also. The flowers are quite eye catching consisting of a lemon-yellow or white with orange-yellow at the base. At 20-90cm high they are a great plant both to look at and to leave alone after they flower for a food source. But wherever you are on Mallorca, sooner or later, those soft, chirps, twitters and jingles will catch your attention - as will the bright lemon-yellow of this delicate little resident gem of a finch.