Two resident species on Mallorca which often cause confusion, are the very similar looking, Cormorant and Shag. Although the Shag is more often found out at sea, the Cormorant can also share the same habitat adding to the confusion if seen from some distance.

But despite them being predominantly one colour, there are differences to help identify them, even from a distance or out at sea. For very close views of Cormorants, in the north, La Gola in Puerto Pollensa will see them feeding on the tidal fed fish that enter the small lagoon, and near Alcudia, Tucan Marsh can be a good site for them as can the Albufera - especially from the CIM and Bishops 1 and 2 hides.

In the south, the salt pans at Sallinas de Llevante and Es Trenc are good sites. The Shag tends to be more out at sea or on offshore rocks just out in the bays - Puerto Pollensa harbour and the coves at Cala San Vicente can be two good sites to see them close as can the harbour near to porto Colom, and a walk around the harbours has given me several sat amongst the boats, you won’t get closer than that!.

Let’s start with some background on the Cormorant - or ‘sea crow’. The Great Cormorant (Phalacrocorax carbo) sees the Latin word ‘carbo’ meaning coal whereas the English name ‘cormorant’ is a contraction of the Latin term ‘corvus marinus’ which means sea crow. Powerful webbed feet allow it to propel itself underwater whereas the wings are short and designed to give added speed underwater.

They pay a price for this however, and it is a familiar sight to see them perched with their wings outstretched to dry them. The voice is a series of croaks, also heard at the nest and roost sites. A colonial breeder, they construct a nest of twigs, flotsam and seaweed in either trees or amongst the Giant Reeds, where 3-4 chalky-white eggs are laid. Food consists of fish, especially Flatfish and Eels - the latter can be abundant on Majorca (I have seen large numbers of ‘elvers’ - baby Eels, at the salt pans).

In flight, the robust body and broad wings give them a ‘goose’ like appearance and on the water from a distance they can resemble diver species. They swim low in the water with their heads tilted upwards and dive frequently, sometimes for long periods. 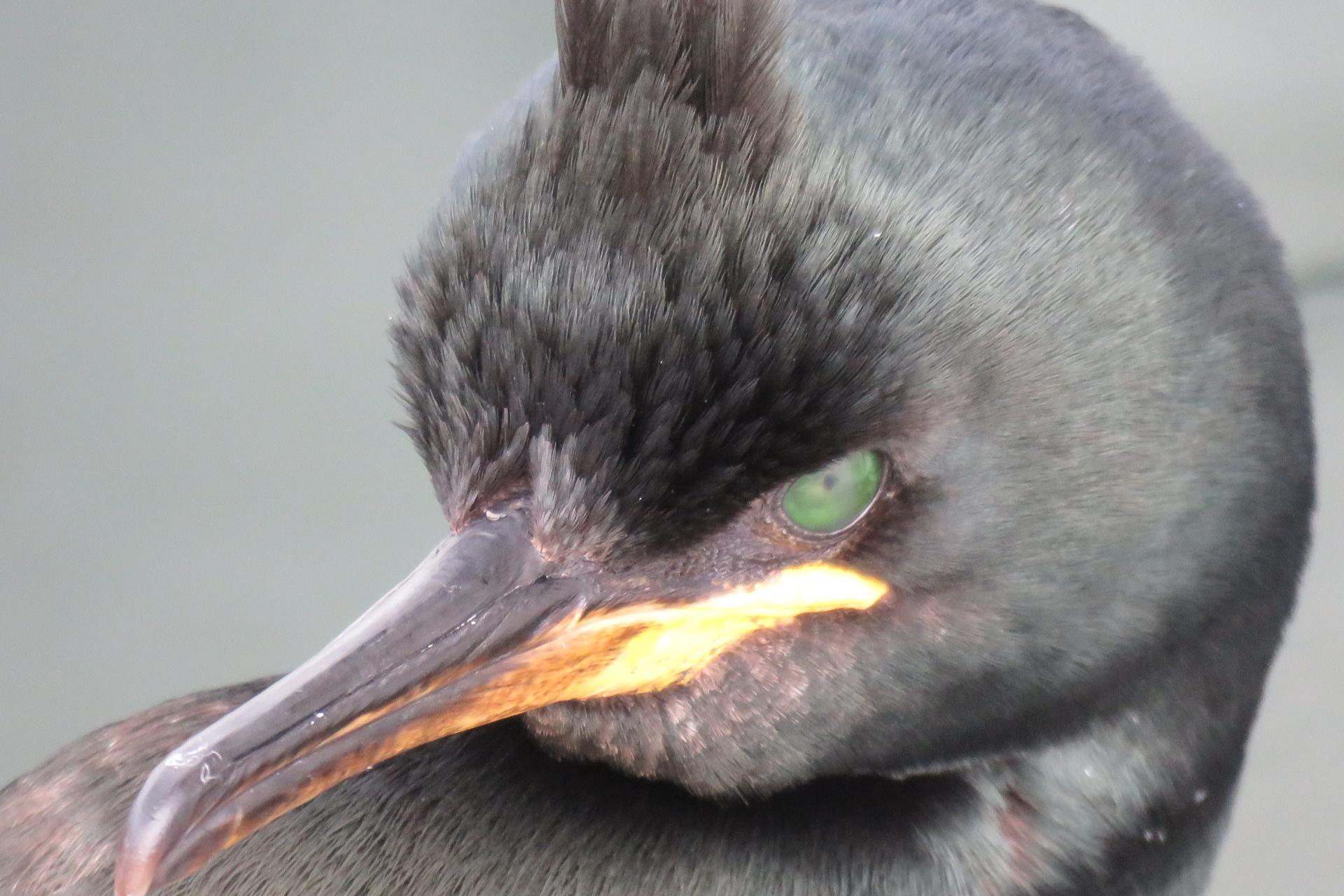 Modifications in their feather barbs allows air to escape allowing them to swim underwater more efficiently. This soon results in a waterlogged plumage which is why you see them drying their wings afterwards.

They have a large bill with a hook at the tip. Most of the white feathering around the nape is lost after the breeding season, and an adult in full breeding plumage has a white thigh patch which is flashed during courtship displays. Adults look dark from a distance, and close up you can see the scaly appearance due to the oily greenish-brown feathers on the upperparts.

Overall, the Shag is smaller, but both species perch vey upright so the size can appear roughly the same. It is in flight that the Shag is noticeably smaller, and if they have just dived, then the crest is flattened so the appearance of both species again can be similar. However, there are subtle differences which are really good identification features. The Cormorant has a white throat, the Shag does not. The Cormorant does not have a head crest and overall, they can appear black whereas the Shag is a glossy-green.

The European Shag (Phalacrocorax aristoelis) is an entirely maritime bird, favouring deeper waters and rockier coasts. Their voice is a series of grunts and clicks. The nest is quite different to that of the Cormorant, consisting of heaps of seaweed and vegetation in a sheltered rocky ledge, where three pale blue eggs are laid. 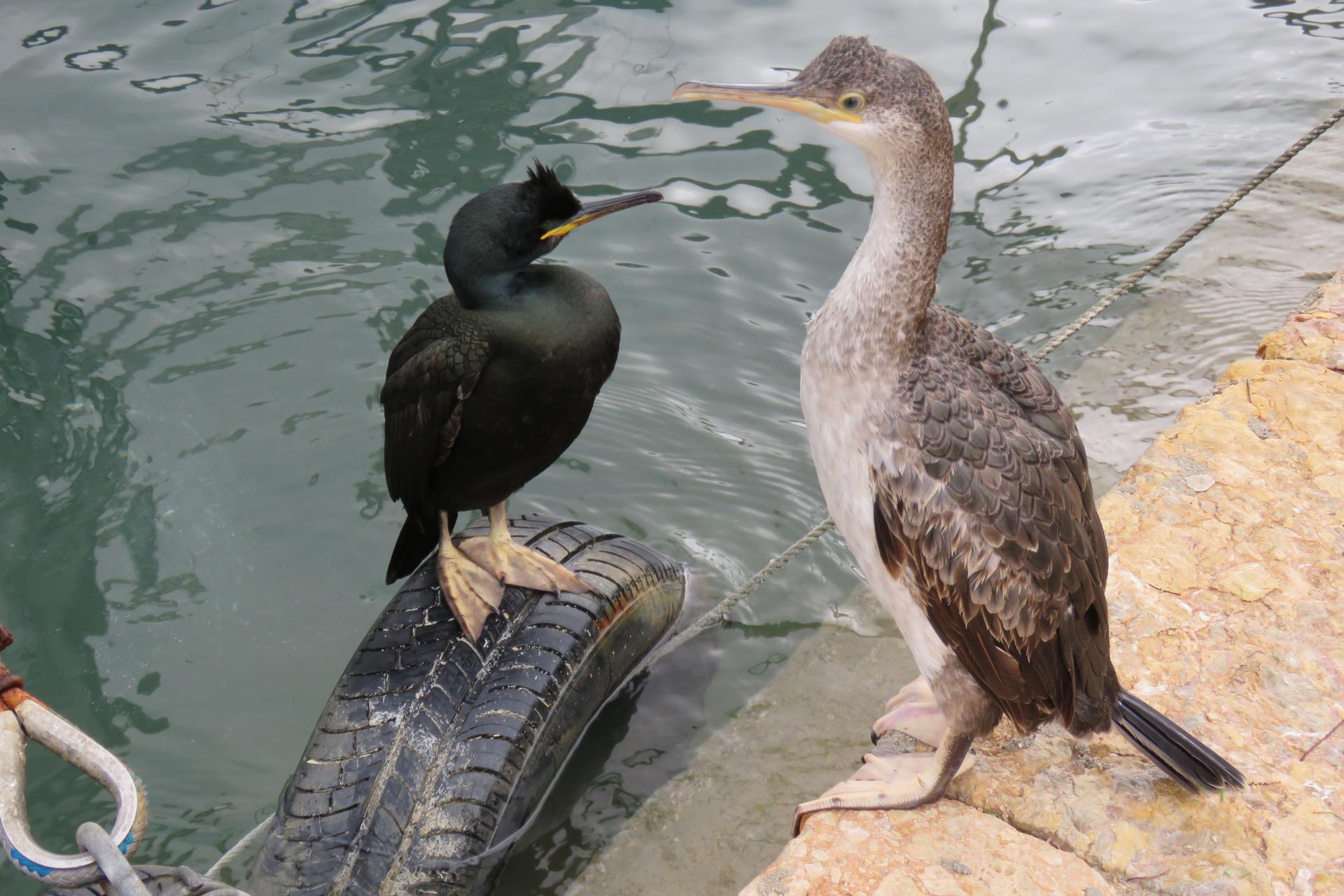 Food consists mainly of Sand Eels and Herrings - and both are abundant around the waters of Mallorca and beyond. The Shag sees the genus name coming from the Greek word ‘phalacros’ which means bald and the Greek word ‘corax’ which means raven. The bald prefix refers to the bare skin around the throat. The specific name is a tribute to the Greek philosopher Aristotle who was one of the first to organise living things into groups and categories.

In breeding plumage, the Shag’s plumage is quite distinct from that of the Cormorant, and the shape of the feather line around the nape is different too. At close range, breeding birds have an oily-green plumage, bottle green eyes, a yellow gape and upturned crest. In the winter, the crest and sheen are lost or at least less obvious. In flight, the wings are shorter and more rounded than the Cormorant with faster wingbeats - the latter being the best identification feature if far out at sea.