Today's food for thought is about this delicious doughnut-like sweet

Mallorca has several gastronomic harbingers of autumn and one of them is the aroma of buñuelos being fried in the street. Buñuelos, doughnut-like confections, are eaten throughout the year but they are also one of the traditional culinary offerings of October.

They are particularly associated with October 19 and 20 — Tuesday and Wednesday of next week. The 19th is a popular fiesta known as La Noche de los Virgenes and buñuelos are traditionally eaten then and the next day.

This year I saw my first buñuelos being fried in the streets some two weeks ago — they are a nice popular sideline and most fryers jump the gun and start to do them as soon as the early evening temperatures drop.

My first smell and sight of buñuelos being deep-fried outdoors was at the entrance to Pastelería Rivoli, the pastry shop in Calle Antonio Marqués Marqués, next door to the Rivoli cinema. The beautiful aroma of the little pastries floating in deep oil assailed my nostrils long before my eyes came into contact with the fryer and her big cauldron of hot oil.

You’ll find these street fryers in several Palma neighbourhoods including Santa Catalina, Plaza París, the Calle Blanquerna area, Calle Juan Crespí and Plaza Alexander Fleming as well as other parts of the city and also in towns all over the island.

You’ll have plenty of time to try these traditional deep-fried pastries because most places continue to do them at least until November 1, All Saints’ Day, another important date on the Spanish calendar.

But you must be street-smart when buying buñuelos in the street. The first thing to remember is that you want buñuelos that have just come out of the frying pan. That means you should never get them at a place with a big bowl of them already fried.

You don’t know long they’ve been out of the deep-fryer and even if it’s just three minutes or so, they could easily be past their best.

You should aim to buy your buñuelos at places where they are being sold as soon as they are taken from the frying pan. There is usually a small queue but it’s worth the short wait to get them piping hot and at their best. 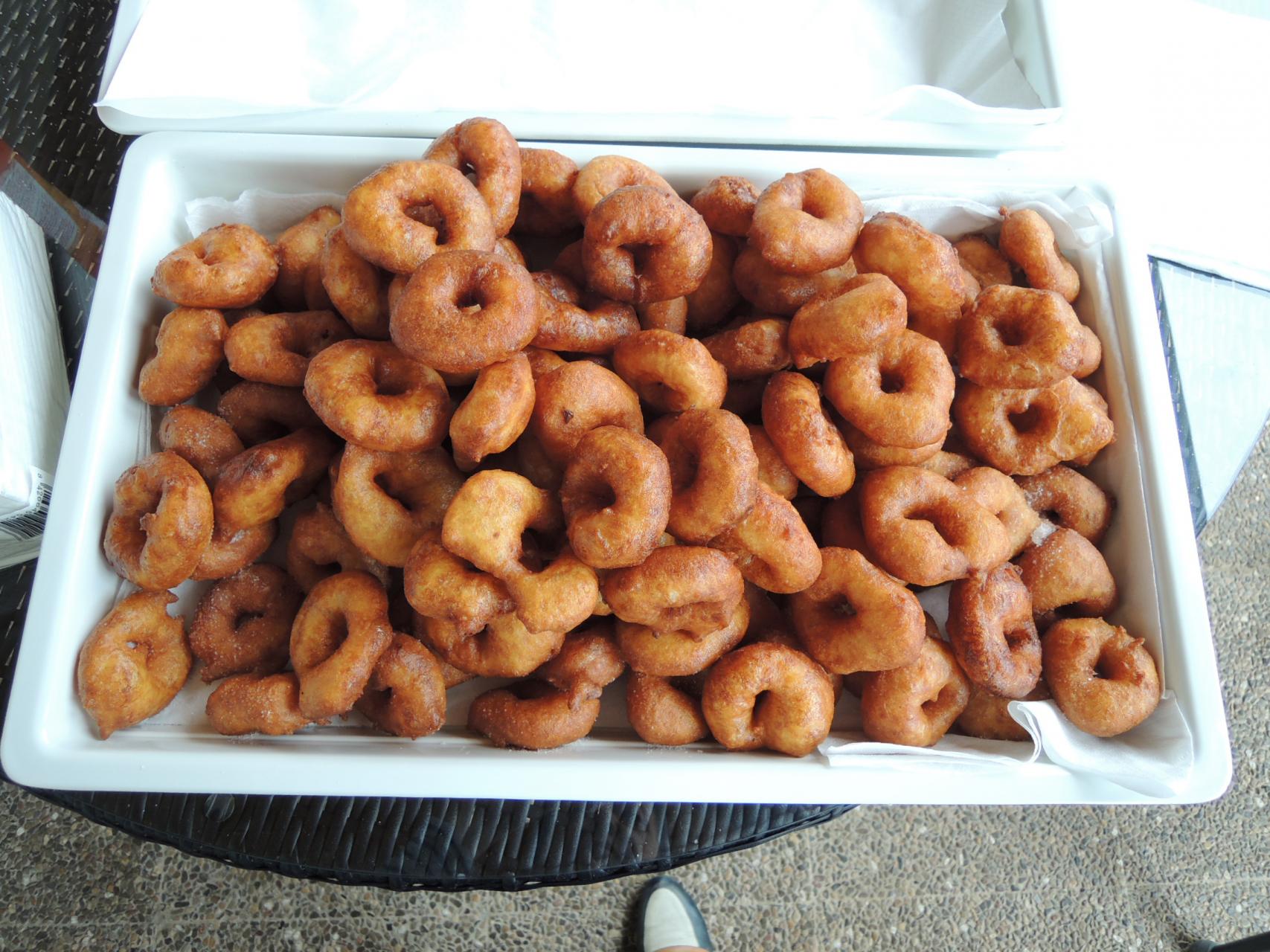 Mallorca has two main kind of buñuelos: bunyols amb forat and bunyols de vent. It’s the ‘forat’ kind that are usually on sale at pastry shops and other outlets.

The bunyol de vent is made with flour, oil or lard, eggs and water. The bunyol de forat contains the same ingredients plus lemon rind, cinnamon and mashed potato. Both have a basic difference you can spot just by looking at them: they are of a different shape.

The name bunyol de vent literally means buñuelo ‘of wind’ — when it is dropped into the hot oil it puffs up and becomes full of air. It is roundish or ovoid.

A bunyol de forat is a buñuelo ‘with a hole’ and it looks a little like a doughnut — but much smaller and nothing like as symmetrical. The ‘forat’ contains mashed potato to give it more body, thus allowing the fryer to pick up the dough in little balls, the thumb being used to punch a hole in them. 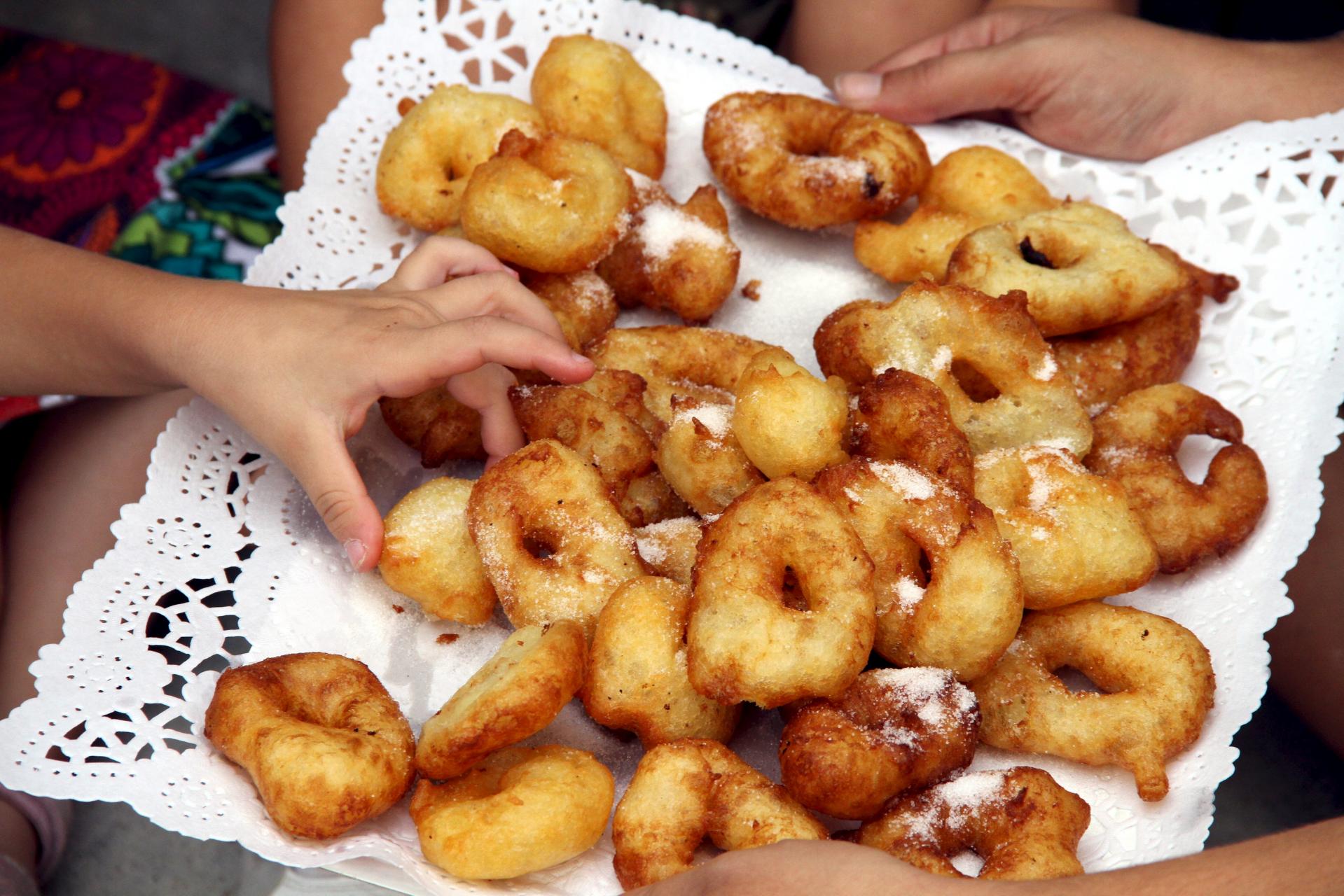 Expert fryers can snatch a ball of dough, make a hole in it and toss it into the oil all in one flashing movement — and one after the other in super-fast succession. It’s a culinary technique I never tire of watching.

The buñuelos are sold in brown or white paper bags. As soon as they are in the bags they are generously sprinkled with sugar — they are not an ideal nibble for those who have to watch their weight.

Shops specialising deep-fried confections were common in the old days, but I know of only one that still functions. It’s called Churrería Rosaleda and it’s in Costa de la Polç, the narrow and steep pedestrian street that connects the start of La Rambla to Calle San Miguel.

They have tables inside and three on the pavement and you can eat our ‘fruits of the frying pan’ with hot chocolate, coffee or other drinks. They are sometimes very busy between 10am and noon, but you can have a takeaway and eat your deep-fried treats as you walk along the street. 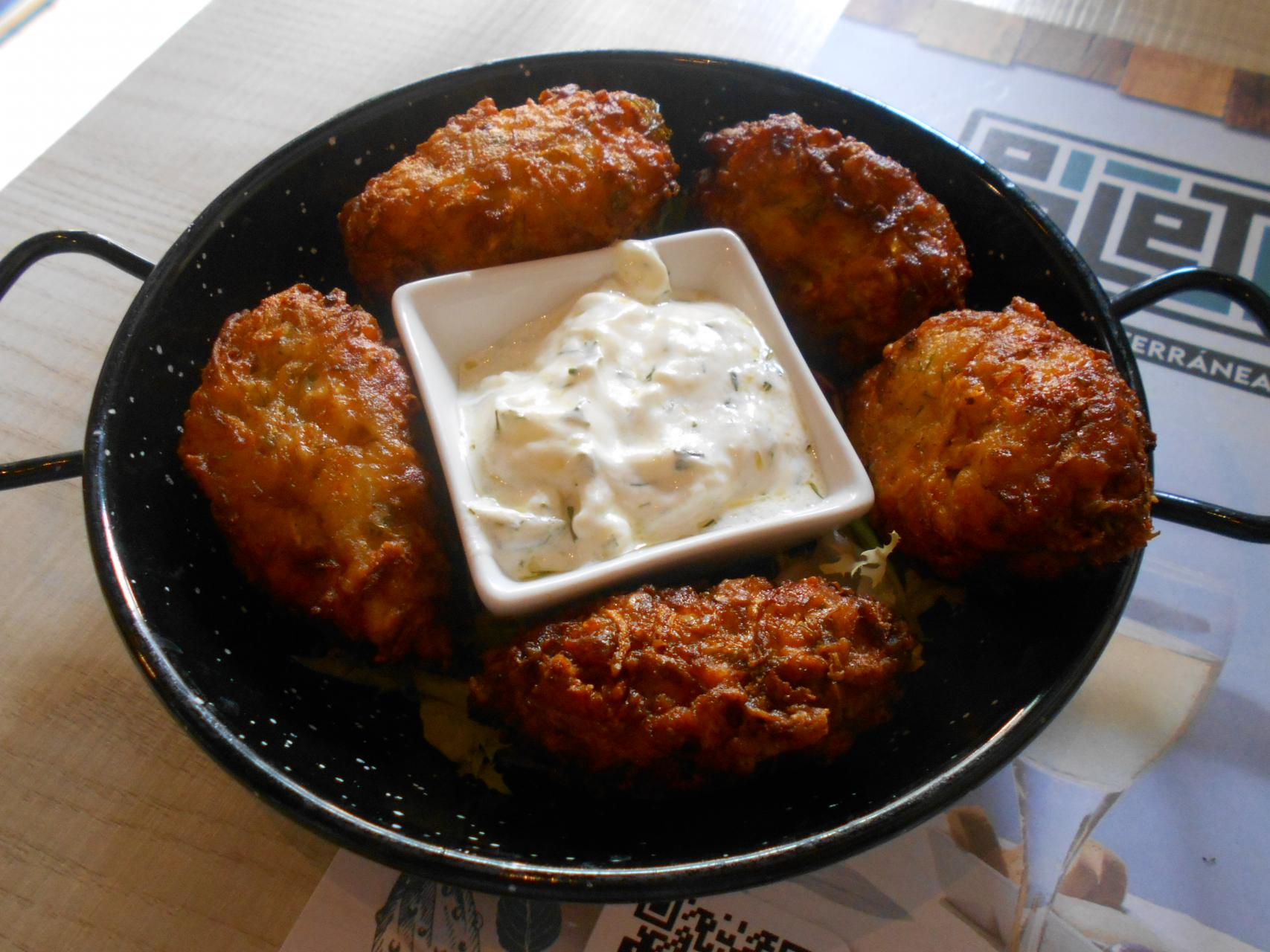 At this time of year most pastry shops do another kind of buñuelo: made with choux pastry and baked instead of fried. It is a profiterole that is slit open and filled with whipped cream or thick custard. It is a dainty nibble with an afternoon coffee and it also sells well from mid October to early November.

The Mallorcan buñuelo is one of dozens of similar deep-fried pastries found all over Spain. They go under the generic name term of ‘frutos de la sartén’ (fruits of the frying pan) and they are much loved by all Spaniards, young and old, rich and poor. Recipes vary but the basics are always the same: flour, eggs and flavourings.

Madrid’s churros are one of the most famous of the ‘fruits of the frying pan’ and are the city’s favourite breakfast nibble. It’s a finger-long strip of fluted deep-fried dough dusted with sugar. Madrid bars fill up every morning with people on their way to work and most of them are having churros with a café con leche or hot chocolate.

As churros, buñuelos and other deep-fried confections are best when eaten straight from the deep-fryer and very hot, they make a comforting bite that helps keep the cold at bay.
That’s one of the reasons why churros are so popular in Madrid where it gets very cold in the winter partly because of its 800 metres altitude — which makes it Europe’s highest capital city.

Another reason for the popularity of all deep-fried pastries and why they are an integral part of many local fiestas, is that they are easily cooked in the open-air.

In former times, some mainland itinerant fryers went from fiesta town to fiesta town, needing only a source of heat and a large cauldron of oil to be in business.

These travelling fryers are still seen at fiesta cities and towns all over the country, but nowadays most of them are huge mobile shops with a couple of electric cauldrons for all kinds of ‘fruits of the frying pan’.

They have a special apparatus for squeezing the churros paste directly into the oil in concentric circles. When a nice golden colour is reached, the fryer lifts out the circle of churros in one piece and then uses scissors to snip it into finger-size pieces. That’s another culinary technique I love to watch. 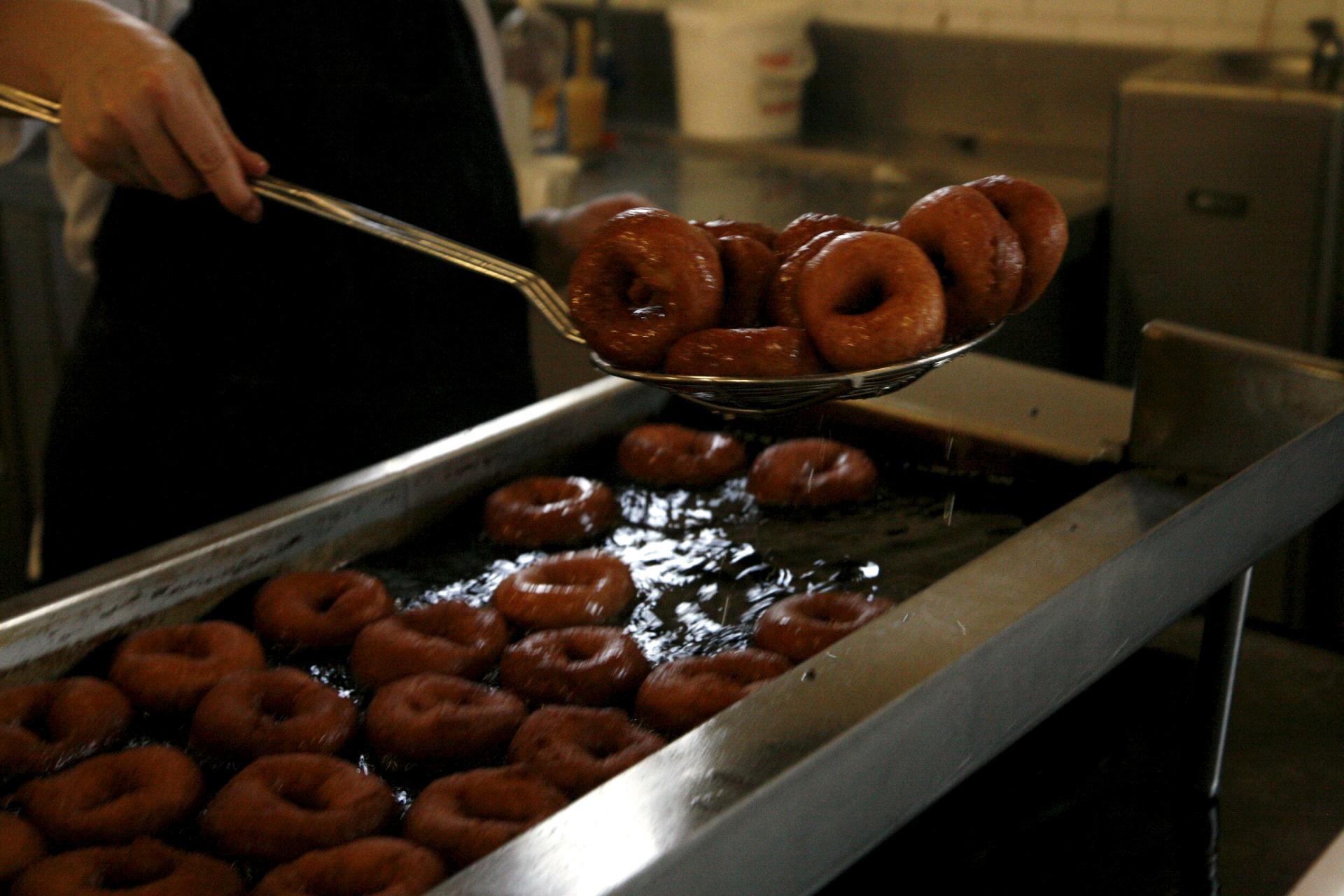 But even the motorised fryers are a dying breed and every year there are fewer of them. But before and after Easter two of these itinerant fryers on wheels are parked in the Plaza España. They do superb ‘fruits of the frying pan’ and their potato crisps are very special.
Deep-fried pastries are not a recent invention.

They were first made in ancient Greece where they were made with flour, eggs and curd cheese, and were drenched with honey after being deep-fried.

From Greece these fritters reached Rome and then found their spiritual home and greatest splendour in the Arab world. The Arabs introduced them to the Iberian Peninsula and they became very popular in the south, in what is now Andalusia.

Fritters of all kinds found a new public in the 19th century when just about every town and village in Spain had special versions that helped to sweeten local fiesta days.

At the same time, basic recipes such as those for buñuelos were undergoing a series of variations. Some were made with sliced apples and other fruits, as well as cottage cheese or mashed potatoes, plus other ingredients.

But no matter what goes into the mixture, the final result has a common denominator: a crisp golden exterior sprinkled with sugar or napped with honey.

When you visit Majorcan villages and towns on their fiesta days, look out for their special ‘fruits of the frying pan’ and try them. In Montuïri you’ll find one called orejones, or orellanas in Mallorquín, a thin flattish disc of crisp batter sprinkled with sugar.

I’ve come across this pastry served as dessert in restaurants in the Montuïri area, with honey drizzled over the surface instead of sugar. If you see them on a menu, be sure to order them.

Spain as so many variations on the deep-fried pastry that I doubt if a complete list has ever been put together. Some have travelled well, however, and they are known in many parts of the country. Some are available in cafeterias, bars, restaurants and supermarkets. Here are a few you’ll sometimes find in Palma.

1 ROSQUILLOS: These are one of the most popular of Spanish pastries and are available in many supermarkets, usually baked instead of deep-fried. They are associated with Christmas and the New Year and are delicious with an afternoon cup of tea.

2 HOJUELAS: These are very popular all over the country and many provinces have their own variations. They are triangular pieces of pastry made with yeast and flavoured with anise. They are sprinkled with sugar or drizzled with honey. The Majorcan version is the orellana mentioned above.

3 FRIXUELOS: An Asturian version of the hojuela, it is a circular piece of pastry about 5 cms in diameter that is deep-fried and sprinkled with sugar.

4 PESTIÑOS: An Andalusian speciality of rolled-up slices of deep-fried pastry drizzled with honey and sprinkled with icing sugar…it’s as sweet as the sweetest of Arab pastries.

5 FLORONES: This is one of the oldest of the deep-fried pastries with a history that goes back centuries. Florones have always been made with an implement consisting of five heart-shaped pieces of thin metal attached to a long iron handle.

The heart-shaped attachments are dipped into batter to just over three-quarters of their depth. The iron with its thick coating of batter is plunged into hot oil. As the batter turns to crisp pastry it comes away from the iron, leaving flower-shaped pastries floating in the oil. In Extremadura florones are made with thick dough instead of batter, a tin mould being used to cut them into flower-like shapes.

6 LECHE FRITA: This one is also found all over Spain but it differs from the others in that it’s not made with a batter or dough. Leche frita, which literally means ‘fried milk’, consists of very thick cinnamon-flavoured custard made with flour, cornflour and eggs.

The cooked mixture is poured into a rectangular flat dish and when cold and solid it is cut into squares or oblongs which are dipped into beaten egg and fried. Sometimes they are coated with breadcrumbs before being fried. You will come across leche frita as a dessert in some Palma restaurants.

7 CASADIELLES: Another Asturian speciality made from dough similar to puff pastry but not as elaborate. Squares of the dough are filled with chopped walnuts and syrup and shallow-fried in a mixture of butter and olive.

As I have already stressed, buñuelos and all other deep-fried pastries should be eaten as soon as they come out of the deep-fryer: their best-by date runs out after only three minutes or so.

Get them at around 1pm and between 6-8pm when you see people queuing up and buying them as soon as they come out of the oil and are hot and crisp.