Tiramisu… the perfect lift me up!

There’s a certain synergy between coffee and chocolate

I love the combination of coffee and chocolate. Like chocolate, coffee goes through multiple stages before it reaches the cup, which accounts for its complexity. There are many varieties from all over the world but the most expensive coffee on the planet is called Kopi Luwak and comes from Indonesia. It is made from coffee beans eaten, partly digested and then excreted by the Common palm civet, a weasel-like animal.

Somebody has to collect and wash it (…and I thought my job was anti-social) before it is roasted and ground. I did try this coffee a couple of years ago and it has a wonderful caramel-chocolate flavour, but it certainly wasn’t worth 45 Euros a cup!

From a chef’s viewpoint, coffee might contain notes of blackcurrant, coriander seed, clove, vanilla and nuts, all of which make harmonious matches. There are however, a few unusual flavour combinations such as Avocado, Rose, lamb & goat’s cheese.

My perfect pairings include coconut, passion fruit, banana, orange, cherry, cardamom and off course, chocolate. There’s a certain synergy between coffee and chocolate. A little coffee flavour in chocolate dishes can make them taste more chocolatey, and visa versa.
I was saddened to read that Ado Campeol, an Italian restaurateur known as the “father of tiramisu” had died at the grand old age of 93 recently at his home in Treviso, in the Veneto region of Italy.

Although the dessert’s origins are often disputed and the family never asserted copyright over the recipe, Campeol and his wife, Alba, the owners of the restaurant Alle Beccherie, are widely considered to be its inventors. According to historians, the dish featuring egg yolks whipped with mascarpone cheese, layered over coffee-soaked biscuits and topped with bitter cocoa powder was added to their restaurant’s menu in 1972.

Although Campeol has been called the “father of tiramisu,“ it was actually his wife, Alba Campeol, and one of the restaurant’s chefs that apparently invented it. Roberto Linguanotto, a chef who worked at Alle Beccherie and is described by many as the dessert’s co-inventor, said tiramisu was the result of him accidentally dropping mascarpone in a bowl of eggs and sugar. He liked how it tasted and told Alba Campeol.

The two then added coffee-soaked ladyfingers and concocted what came to be known as tiramisu, which first appeared on the restaurant’s menu in 1972. The word tiramisù, literally translated as “lift me up”, comes from the Treviso dialect’s “tireme su”, and the dessert was claimed to have aphrodisiac effects. These days, Tiramisu is found on restaurant menus the world over.

For me, there are a few basic rules to make the perfect tiramisu. Firstly, very fresh, free-range eggs are a must. High quality, dark, bitter cocoa powder is also an indispensible ingredient along with savoiardi (ladyfinger) or boudoir biscuits that are available from all Italian food specialists. Start by separating the eggs into two large, clean bowls and whisk the whites until they form stiff peaks, you should be able to hold the bowl upside down with confidence, but take a little care when testing this.

Then beat the egg yolks with the sugar until voluminous and pale yellow in colour; like whipping the egg whites, this is easiest done with a food mixer. Drain off any excess liquid from the mascarpone, if necessary, put it into a medium bowl and beat with a wooden spoon to loosen a little. Beat the cheese into the egg yolks a little at a time, until you have a smooth mixture without any lumps. Using a large metal spoon, gently fold a third of the whisked whites into the cheese mixture, then, once that’s well combined, gently fold in the remaining egg whites until smooth.

Put the cold coffee and alcohol, if using, into a wide dish. Booze doesn’t appear in all versions of tiramisu, but I prefer a little sweet sherry, amaretto or triple sec in mine although baileys, marsala, brandy, grappa or a rum can also be good alternatives.
Dip each biscuit into the coffee mixture until they’re a pale brown colour, and then use them to line the base of a medium rectangular tin. Spoon a third of the mascarpone mixture on top of the biscuits, followed by a generous sprinkle of cocoa powder.

Repeat the layers twice more, finishing with a layer of the cheese mix. Cover and refrigerate for four to six hours before serving, though you can make it a day ahead, if necessary, before ending with a final flourish of cocoa dusted on top. I also like to grate a little dark chocolate over my tiramisu before serving for a little extra Kick. 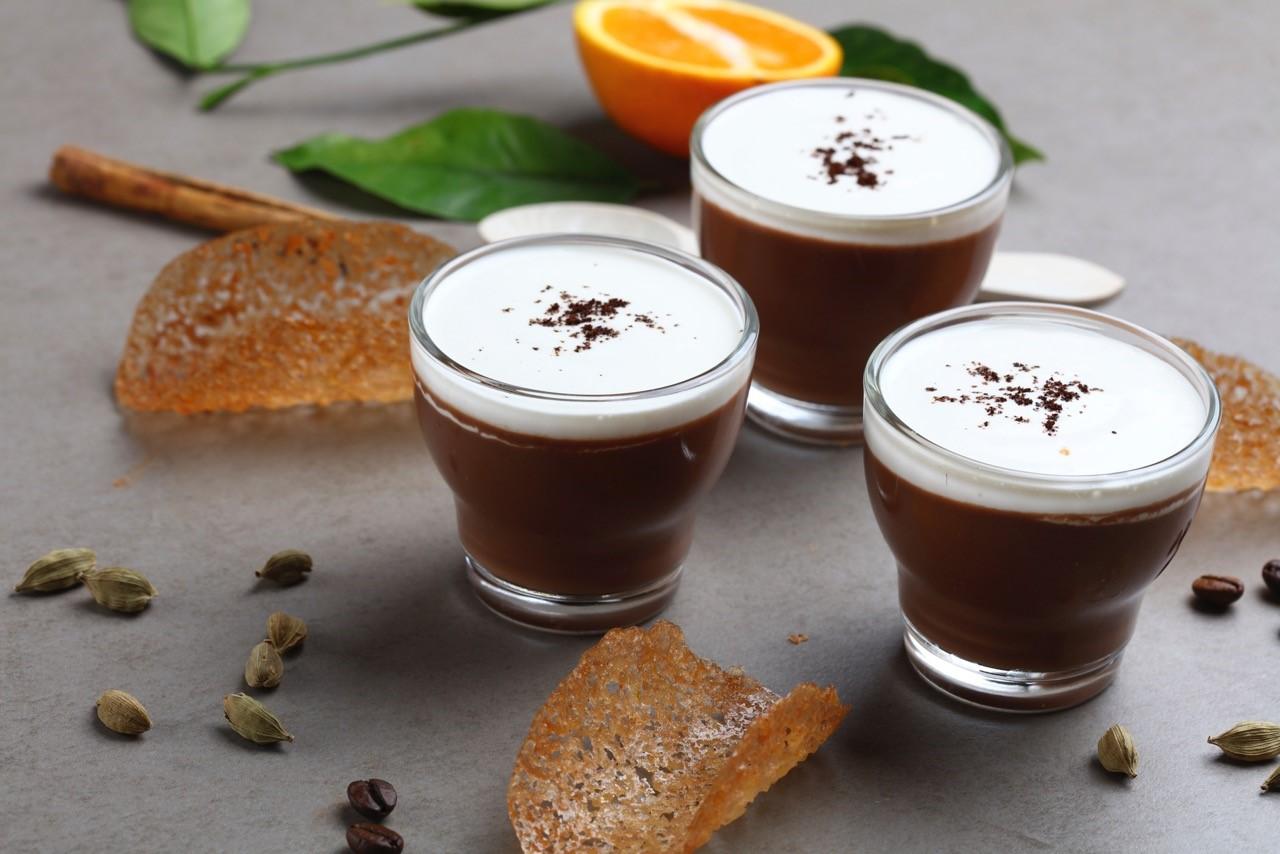 1 Place the cream, coffee beans, cardamom and cinnamon in a saucepan and bring slowly to the boil. Lower the heat and simmer for 5 minutes. Turn off the heat and leave to cool and infuse.

2 Pass through a fine sieve into a clean saucepan and return to the heat. Add the chocolate and stir until it has melted.

3 Whisk the egg yolks and sugar in a bowl and add the warm chocolate cream. Pour the mixture back into a saucepan and heat gently, stirring continuously, until it thickens to a custard consistency.

4 Remove from the heat and cool in a sink of iced water, stirring continuously.
Pour the coffee creams into coffee cups or glasses and chill well before serving.