Crosswise and the shatterer!

Today, I am going to concentrate on two great finches found on Mallorca, starting with a resident sub-species and a winter visitor - both of which are stocky, characteristic birds and much sought after by resident and visiting birdwatchers alike. One can be easy to see and the other is a shy, optimistic bird.

The resident finches here include the Chaffinch, Greenfinch, Linnet, Goldfinch, Serin and Crossbill, with winter visitors including the Siskin and Hawfinch. Rare vagrants have included Bullfinch, Redpoll, Scarlet Rosefinch, Citril Finch, Trumpeter Finch and Yellowhammer. Trumpeter Finch I found at the Albufera from the Watkinson Hide in 2003 which at the time was a lifer for me, and Yellowhammer I have recorded on several occasions, with the last being in the grounds of the Fergus hotel in Puerto Pollensa (formally the Pollensa Park Hotel).

The Common Crossbill - Loxia curvirostra, is commonly known by the name of Trencanpynions - or ‘pine nut cracker’, which is the Catalan name for this species, and here we see the sub-species Balearica. Anywhere where there are good covering of Pine will see Crossbills - the Pine woods near Es Trenc in the south for example, or the Pine woods around Alcudia and one of my favourite spots to see them, parking by the km 11 marker post at Cases Velles (on the Formentor road).

Here, they can be seen feeding right above you, with Firecrest possible too. Woodland pools around here (if seen from the road as the woods are private and access only allowed if staying at the Formentor Hotel), will see them coming down to drink and bathe on occasion.

Another great place to see them is around the woods of Son Real, where on one of the trails there is a small hide tucked away in the woods with an artificial pool in front of it. In the autumn and winter, sitting in here for several hours can reward you with birds coming down to drink such as Crossbills, other finches, Blackcaps, Blackbirds, Robins, Chiffchaffs and if you are very lucky - Hawfinch. 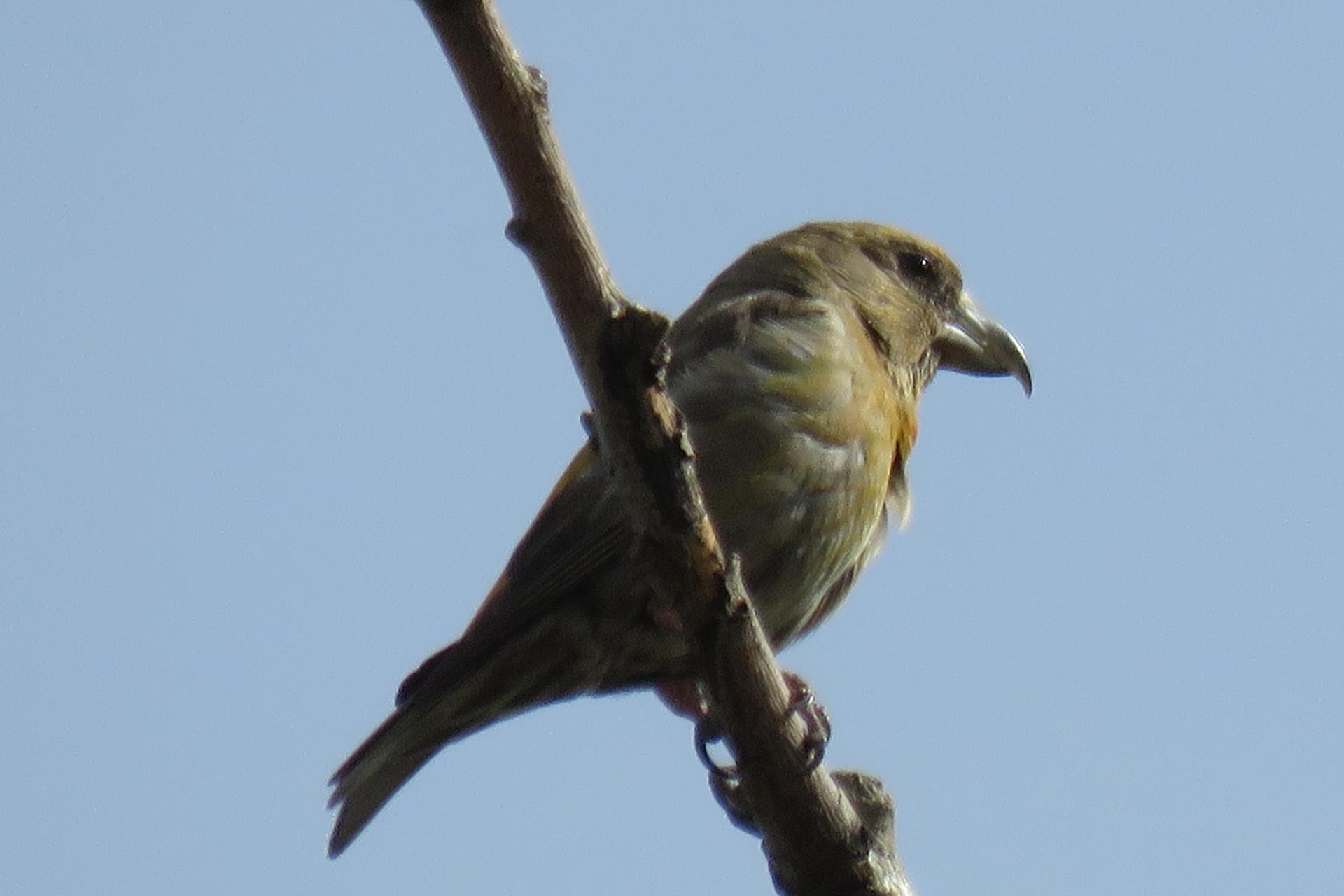 The genus name comes from ‘loxos’ - a Greek word for ‘crosswise ‘and the species name comes from the Latin verb ‘curvus’, meaning to bend. Rostrum means beak. Curvirostra is Latin for ‘curved bill;. Their bill shape makes them unique in the bird world, and the upper mandible can bend to the left and right.

The seed cones of Pines form their diet where the bill is used almost like tweezers to open the outer cone to extract the seeds inside. They weight 34 - 38g so they are a stocky finch with a loud persistent ‘chip chip chip’ call, heard both when groups are feeding and when flying from one copse to another, sometimes interspersed with Greenfinch like calls. The adult male has a striking red plumage (except for the dark wings) and the adult female is an olive-green - again except for the dark wings.

Juveniles are browner with a heavily streaked plumage and sometimes show faint wing bars. The nest is a platform of twigs built close to a tree trunk, where four off-white eggs with bold spots are laid. As with any tree nesting species here, there is always the chance that the resident Pine Martin may come across the nest site, but having said that, Crossbills are doing very well here on Mallorca, and can be a pleasure to watch. 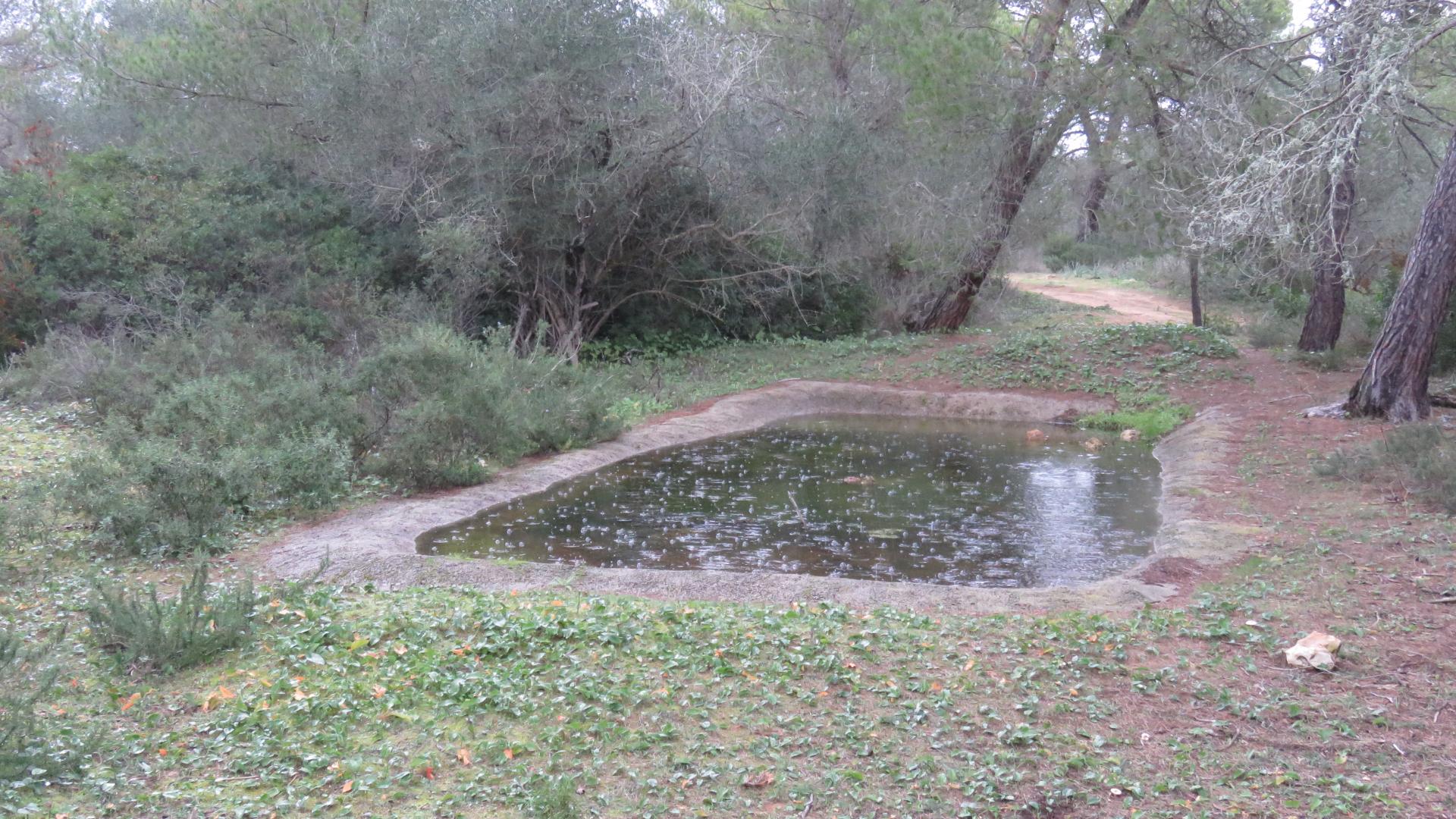 They feed mainly on hard seeds from trees as well as fruit with the help of the strong jaw muscles (in fact the head tends to look very muscular). The seeds of Cherry and Plums are no match for the formidable large steel-blue beak. Pine seeds, berries, even Sprouts and the occasional Beetle will form its diet, and in the winter, it is not unusual to see them feeding in small groups.

They are however a shy species and can be difficult to observe. They spend a lot of their time in the high branches and are only seen on the ground when looking for seeds or drinking water, and always near to trees. This is where the hides in Son Real come into their own, where with a lot of patience, you may be rewarded with seeing one. The photo was taken by friends I have guided on Mallorca, who sat in this very hide one autumn and were rewarded with both Hawfinch and Crossbills.

While drinking and eating, it is fairly aggressive and dominant towards both the same and different species, even bigger birds.

They are a large, unmistakable finch, with a distinctive profile both when perched or in flight. The beak looks huge and triangular in the outline. In flight, they show a lot of white in the wings and have a short-tailed look. Even the head and neck and proportionately large - not surprising when you think of those large neck and jaw muscles. The male has an orange-buff plumage with black around the base of the bill and on the bib. The mantle is a reddish-brown and the wings dark, but showing a broad white band on the coverts. The tip of the tail is white. The female is similar but has duller colours. 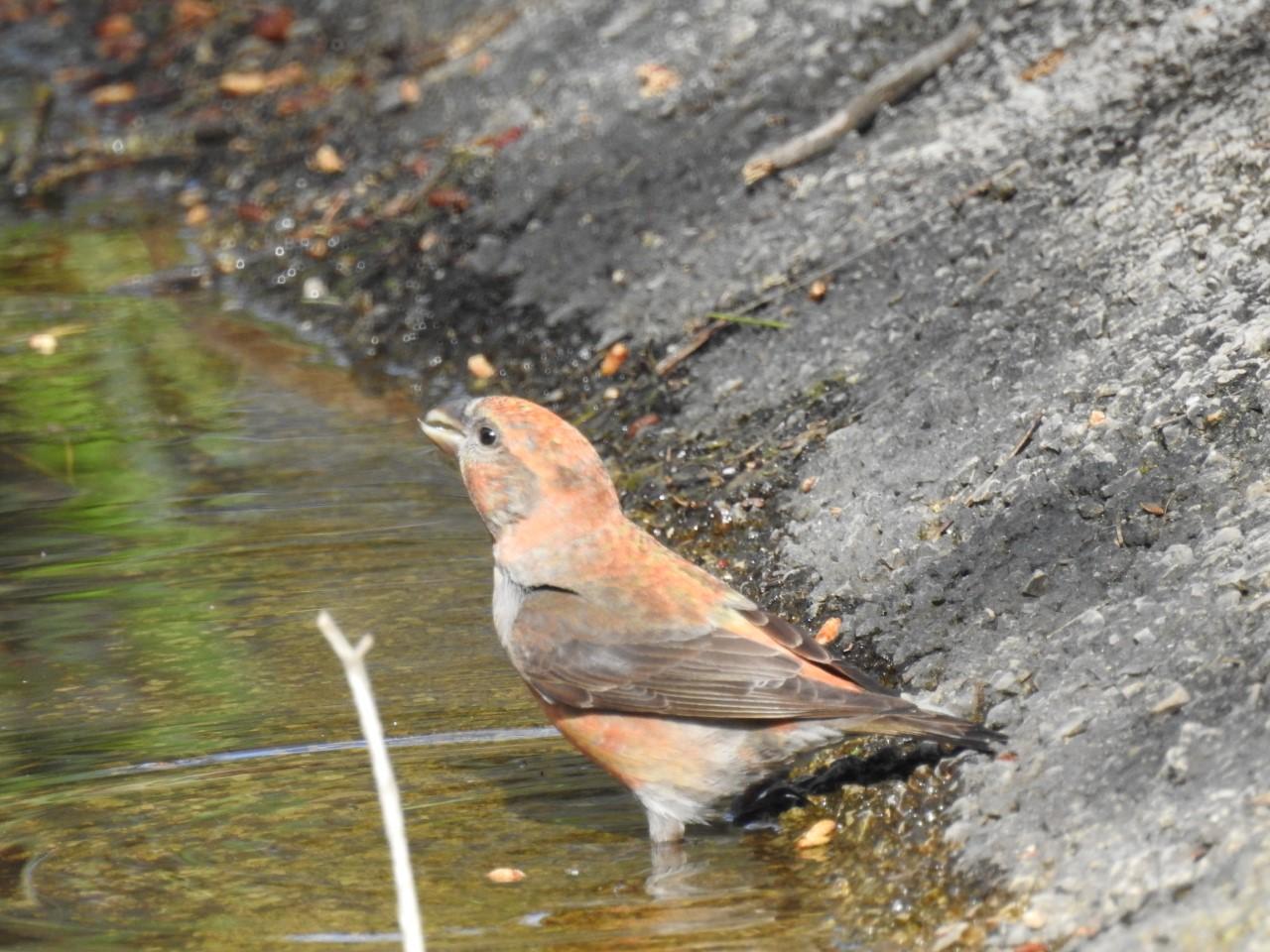 They will supplement their diet with some insects in the winter and listen out for the loud Robin-like ‘tic’ call. They weigh a respectable 48-62g and look ‘top heavy’ when perched.
It is a great time now on Mallorca even though the busy summer visitors have gone. There are Chiffchaffs, Black Redstarts and Song Thrushes in abundance, the Alpine Accentors will be making an appearance in the higher altitudes, waders are flourishing on the marshes and lagoons and Bluethroats will be showing themselves off amongst the vegetation.

Soon the Almond trees will be coming into blossom adding a bit of colour to the landscape, and it is the time of year to check through thrush and wader flocks carefully, just in case there is that something a little special tucked in amongst them. Happy searching.