Asturias, an autonomous region and former principality in north western Spain, has made three superb contributions to the country’s regional cooking for which every gourmet is grateful: cabrales, cider and fabada.

Cabrales is the distinctive blue cheese that is in the same league as stilton, roquefort and gorgonzola. Cider is one of the world’s great fermented drinks and is an Asturian speciality.
Fabada is a dish of beans, pork, ham and other charcuterie and is a kissing cousin of the French cassoulet. It is Spain’s most famous beans dish and it topped the list of the ‘Magnificent 13’ — the most highly rated dishes in Spanish regional cooking.

A group of the country’s most illustrious food writers in 1972 drew up a list of the ‘10 most important dishes in Spanish cuisine’.

After much discussion and voting, they got the list down to 13 and published it in January of 1973 in a magazine called Gaceta Ilustrada, which had organised the debate, under the name of the ‘Magnificent 13’.

Top of that list was fabada with eight votes, two ahead of paella. Third with five votes was lacón con grelos, the Galician dish of lacón (gammon) with turnip tops, a winter green highly appreciated in Galicia.

Fourth, fifth and sixth were bacalao al pil-pil, cocido madrileño and gazpacho, all with four votes. Bacalao a la vizcaina was seventh with three votes.

So what’s so absolutely fab about fabada that it beat the other 12 to the top position? On paper it’s a simple country dish: white beans simmered with cured ham, salt pork, lacón (the equivalent of gammon), Asturian smoked chorizo and morcilla, an Asturian black pudding that is also smoked.

It is one of the easier recipes to get right because it’s the kind of dish that looks after itself once the ingredients have been assembled. An authentic fabada, however, depends very much on the use of high quality products.

There is no classic recipe. Some cooks use only lacón, cured ham, salted belly of pork, morcillas and chorizos. Others add these items plus several parts of the pig, including salted ears, tail, tongue, spare ribs, cheeks or trotters.

Some flavour the dish with bay leaves and paprika is sometimes stirred in at the end. Other cooks never use paprika. The addition of a few threads of saffron is almost universal.
The making of an authentic fabada has at least one inconvenience: it must be made with the unique long white beans, called fabes asturianas, and the price is sky high. The last time I noticed, they were costing €24 a kilo.

When you analyse the price of fabes asturianas, however, they aren’t all that expensive. You would need 600 grs for six people and that would work out at €2.40 per head — or a total of €14.40 for the dish’s main ingredient. It’s not all that much for such a unique ingredient.

But there are other white beans on sale at around €2 a kilo and you will make a most successful dish with them. Ordinary kidney beans called alubias largas are on sale at most supermarkets. White bean prices vary: use the most expensive ones when doing a fabada.

When buying pulses of any kind, especially at small shops and supermarkets, always look at the sell-by date. Pulses that are more than a year old will soak up extra liquid and will need longer cooking times. The moral: buy your pulses at busy supermarkets with a quick turnover.

White beans of any kind should always be soaked overnight in plenty of cold water, but there is no need to add bicarbonate of soda as recommended in some recipes.

When cooking the pre-soaked beans put them into a suitable saucepan and cover them with 5 cms of cold water. Bring them very slowly to the boil and then simmer them gently until they are soft. You must never have them at a rolling boil and you mustn’t add salt until they are soft. 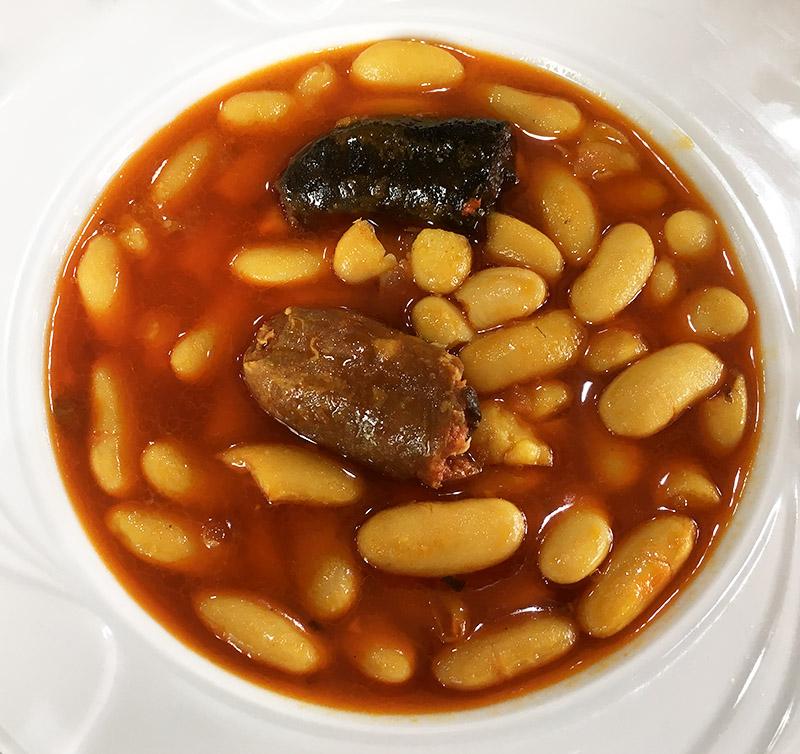 There are hundreds of recipes for fabada: every cook seems to have a special variation on the main theme that makes his or hers the best ever. In my files I have dozens of anonymous recipes I have collected over the years, but for today’s version I have chosen one that is rather famous.

It comes from La Máquina restaurant in Lugonés near Oviedo, the capital of Asturias. Connoisseurs reckon it serves one of the best fabadas.

Look through the beans, discarding any that are discoloured or damaged, and soak overnight in plenty of cold water. At the same time, but in a different bowl, soak the ham, belly of pork and the lacón.

Wash the morcillas and chorizos under running water, scrubbing them gently with a brush to get rid of any mould.

Drain the beans and put them into an earthenware pot, preferably a tallish one with a narrow neck. Add enough cold water to cover the beans by 5 cms. Bring the water slowly to the boil, uncovered, skimming off any scum.

While the water is coming to the boil, heat the saffron threads for 20 seconds over a lowish heat in a small frying pan, shaking the pan constantly. Leave the saffron until cold, crush them finely with the back of a small spoon and add the powder to the beans. When the beans come to the boil, add the lacón, the belly or pork and cured ham and simmer for five minutes after it comes back to the boil, skimming off any scum. Add the morcillas and chorizos and skim after five minutes’ simmering.

The pot should now simmer very slowly for a couple of hours or longer, depending on the age of the beans. During this time the pot must be watched to ensure the beans haven’t absorbed a great deal of liquid. As the level of the liquid drops, top up with cold water.
Give the pot a brisk shake from time to time. Asturian cooks never stir the beans with a fork or a spoon to avoid breaking the beans or bursting the morcillas.

After about 90 minutes of slow simmering, test a bean for softness and you’ll have an idea of how much extra cooking they need. When soft, test for salt. The ham, lacón and belly or pork will have given out some salt and you may not need to add any more.

The remaining liquid should be thick and silken. If is is too thin, mash a few beans with a fork and carefully stir in this paste as a thickener.

Take the pot off the heat and leave it for 10 minutes with the lid on before serving. Remember that bean dishes like fabada are best when made the day before and then carefully reheated.

Although fabada is often a one-plate meal, some connoisseurs prefer to have the beans as a starter, the meats and the charcuterie being served on their own as the main course. This is especially the case when authentic fabes asturianas are used.

Either way, the meats, the morcillas and the chorizos are cut into bite-size pieces before being served.

Fabada is just one of the many hundreds of winter dishes for which Spanish regional cuisine is renowned. Spanish housewives are dab hands at doing dishes that get us glowing with warmth on cold winter days.

They cook simple beans dishes with pork and sausages, make pasta soups, thick vegetable potajes as well as braised meats and stews packed with potatoes and other root veggies.
Fabada is an expensive dish, but many of the other winter specialities are made on a sausage string. When meat is used, it’s the cheaper cuts that become tender and succulent after long slow cooking.

A potaje containing up to seven or more veggies plus lentils or white beans is another favourite winter dish and it can cost around €1 per person. And it’s not a labour-intensive dish. 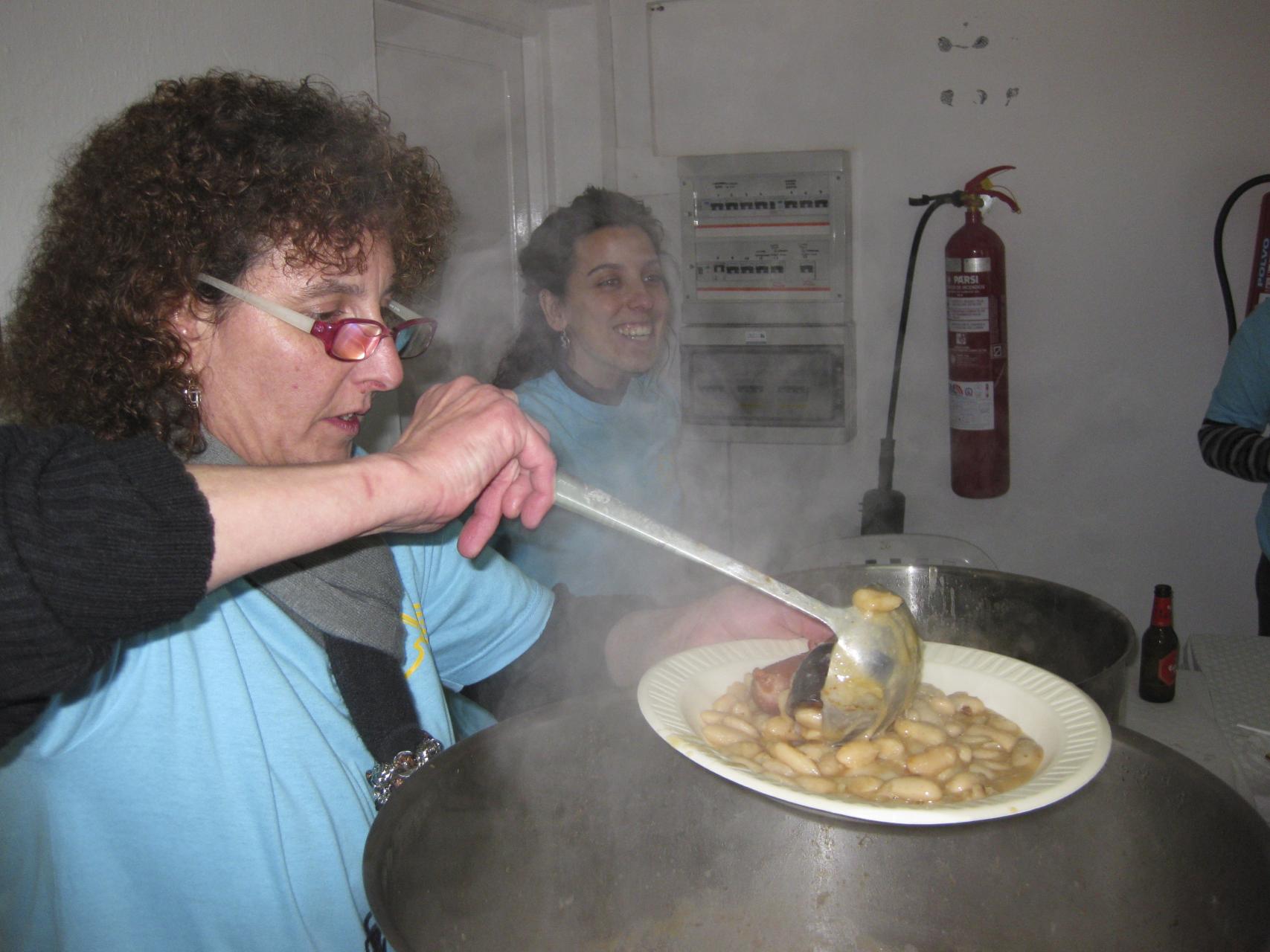 The success of many of these winter dishes depends on the use of a homemade stock. Although many young Spanish housewives have never made stock and probably never will, home cooks of the old school would never consider using a stock cube.

Every supermarket has the makings of good meat and vegetable stocks. The meaty ones come in packs consisting of hen, beef ribs with plenty of meat, beef marrow bones and ham bones.

Hen makes better stock than chicken because it is an older bird with much more taste and more fat. The tastier the meat, the more flavourful the stock. Most Spaniards like soups with a strong taste of cured ham which can be achieved with ham bones and panceta. The best ham bones are at Mercadona. It’s a piece from the knee to the foot and its very meaty.

It comes in a plastic pack and looks like a whole bone but it is sawn through and is easily split into convenient chunks. You can add one or two pieces to the stock pot and keep the others for another occasion.

There are two basic ways of making stock, depending on whether the meat is to be used for another dish. If you were using chicken legs to make stock, with the meat then being used to make croquettes, the legs are put into boiling water.

That way they start to cook immediately, thus losing less of their taste to the stock and remaining flavourful enough for another dish such as croquettes or stuffed pancakes.
But sometimes we want to extract all the goodness from a cheap cut of beef or beef rib bones.

In this case, the meat is put into cold water and brought very slowly to the boil before being simmered for a couple of hours. This method ensures that all the goodness and flavour in the meat are transferred to the stock.

When making stock, what we end up with depends very much on what we put in. Little bits of meat with chunks of fat clinging to them, or fatty chicken skin, never make good stocks.

Meat or poultry will give stock its basic flavour, but vegetables also have a say in the final outcome. 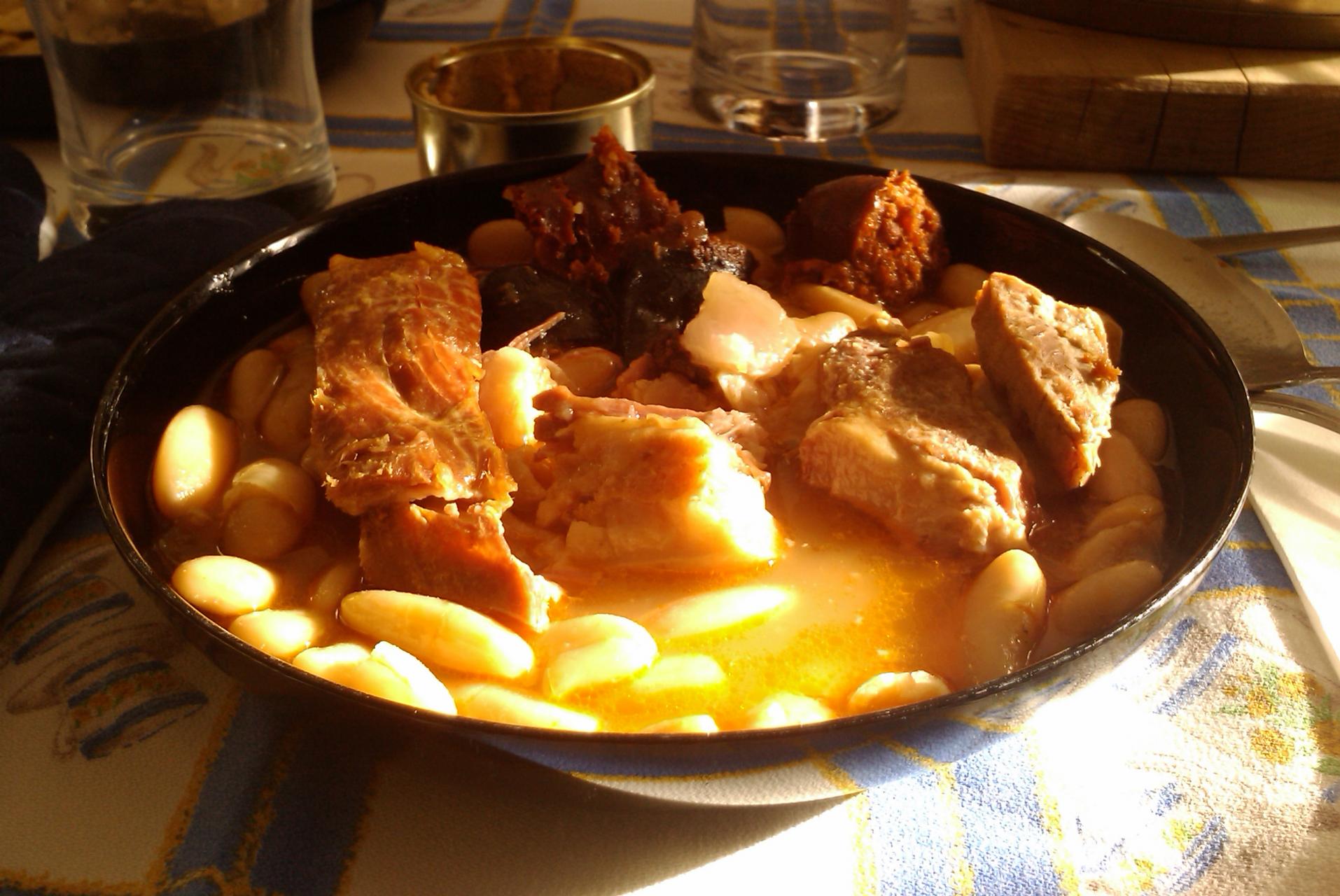 Root veggies such as carrots, turnips, parsnips and swedes, add subtle aromas and flavours. They can be cooked until al dente and served with the meat, or used for another dish.

Other possible veggie additions to the stockpot include red and white onions, the green stalks of leeks that are tough and fibrous, plus celery leaf and stalks, which always add a touch of elegance.

Parsley and thyme and other robust herbs of your choice also give stock a note of distinction. But don’t be too extravagant with the herbs or they will overwhelm the other subtle flavours.