Okay, perhaps I’m a cheapskate, but come on, really?

As part of our extended stay in southern England we took off at the end of last week for a few days in Devon. We have rented a lovely old house alongside the river Sid that meanders through this part of East Devon and emerges into the sea at Sidmouth. 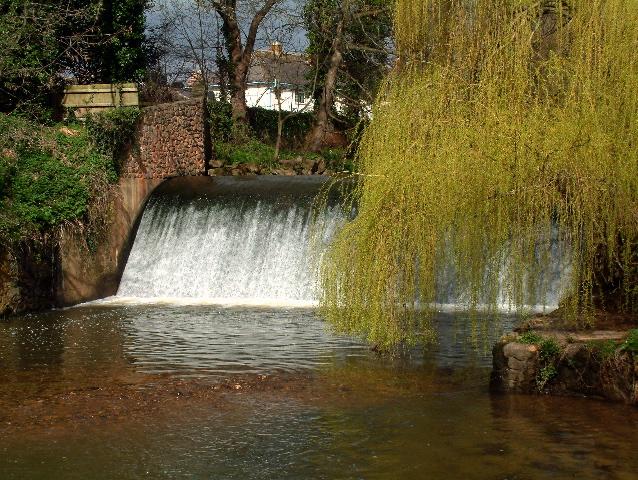 I have to say that the weather has been ‘blameless’ and so we have been discovering this part of the world under a clear blue sky for five days, with two more to go. I have only told you about the weather here because I happen to know that Mallorca has been suffering from one of its occasional bouts of unsettled weather and so it is quite nice to appear superior for once in the “…isn’t it a lovely day?” department.

The house where we are staying is at least two hundred years old and in very good condition, but - for some reason I keep banging my head on low-slung wooden beams as I fail to duck when entering the scullery - indeed, I only mentioned this because I wanted to use the word ‘scullery’ for the first and last time in my weekly missives.

Nevertheless, you will also be pleased to know that as I move about the place, I’m told that I take-on the manners of a late Edwardian toff, in the manner of the Earl of Grantham of Downton Abbey fame, as these places can do this to a person, or so - one is told!

As the coastline in these parts of West Dorset and East Devon is called the Jurassic Coast you can imagine that the scenery is spectacular to say the least. Nevertheless, unlike the beaches in Mallorca and other European holiday destinations, the beaches here are very different indeed.

Perhaps if you have visited this part of the world in the past, you will remember the vast, red hued cliff faces, that dominate the scenery and have done so for many millennia. Then there are the wide beaches that are subject to huge tidal flows and various river outlets that flow into the sea all along this coast. Yesterday we visited a small pretty town called Budleigh Salterton and if it wasn’t quite love at first sight, it was very close to it. The town is perched along the coastal path and like scores of old seaside towns across Britain it has a charm all of its own.

A population of about 5,000 souls an 18th century church and a single High Street boasting some surprisingly posh shops and two splendid pubs, had me, if no-one else, becoming rather damp-eyed in appreciation. Silly old fool! Anyway, back down on the each; instead of sand on which tourists could luxuriate, most of the resorts on this section of coast have pebble beaches, or in the case of Budleigh Salterton, more like a coastline covered in medium sized boulders or large smooth rocks. In fact, the exact opposite to most Majorcan beaches, not any better or worse, just very different.

It's me versus tractor man

As you know, I’m not one to moan or complain - but, after waxing lyrical about the local coastline and the pretty towns scattered above it, I do have one cause for concern. Rather like local drivers in most places, I suspect that these very same drivers are out to get me.

Down narrow country lanes and through small picturesque villages, I have noticed that mean looking men, in beat-up bangers, like to frighten the life out of me. In my regulation small Ford ‘whatever’ I seem to be a target for every cross-eyed maniac with ‘go faster’ scrapes down the side of his car.

As mentioned before, my motor is a modest affair and smallish too boot - so why is it they all aim straight at me down country lanes? As one of those people who is unfailingly polite and lifts his hand up in pathetic acknowledgment if anyone should show even an inkling of driving etiquette or just old fashioned good manners I don’t know why I bother. Although, I have to admit that I haven’t had to worry too much in this regard since we arrived in carrot crunching territory a few days short of a week ago.

Mind you, these impatient youths are as nothing compared to ‘tractor man’ in a lonely lane. I think that there is a certain code that makes them wave you past, just as a local lad heads in your direction at great speed. I can imagine them enjoying this ‘sport’ and sitting, pint in hand, in the ‘The Bale of Hay Arms’ on a Saturday night, reliving the terror they inflicted upon us ‘grockles’ as we nervously groped our way around miles of country lanes.

When I think about it, they are the Devonshire equivalent of those low-slung Spanish lads who swerve from lane-to-lane, at high speed, along Palma’s maritimo causing much consternation amongst people like me and others of my nervous disposition.

I think that I mentioned in this column a little while ago that I thought a family holiday in Mallorca would be much cheaper than here in the UK. Without going into tedious detail, as I know that some people are not convinced of this fact - (I have had emails!) perhaps I need to be more specific.

You only need to go into a pleasant local pub at lunchtime and order a glass of wine and a sandwich and you will find yourself saying - “How bloody much!” Last time I checked, a glass of modest white wine didn’t cost circa £8 at a local bar in Mallorca - nor did a thickly cut ‘Devon Ham and Piccalilli Sandwich’ threaten bankruptcy at almost ten quid a pop. Okay, perhaps I’m a cheapskate, but come on, really?