Morocco wants to strengthen its commercial and business ties with the Balearic Islands and boost trade on the islands.

At a Day of Internationalisation to strengthen trade agreements between the two, the Moroccan Ambassador, Karima Benyaich said both countries would profit from closer connections.

”Balearic companies can benefit from the advantages offered by our free trade agreements,” she said.

The Ambassador said that “Industry, Agriculture, Energy, Fisheries, Information Technologies and Hotel Companies in Mallorca, such as, Barceló, Meliá, Riu and Globalia are all good Sectors to invest in.”

The Hotel chains currently manage around 20 hotels, with more than 14,000 beds and Morocco wants to take advantage of the International experience of these chains to strengthen its Tourism Industry on the Mediterranean and Atlantic coasts.

The Moroccan Minister for Economic & Business Affairs, ​​Aziz El Atiaoui, said his country offers advantages for investors, whether they are tourists or not.

"There are tax incentives, such as a zero corporate tax rate during the first 5 years of operation and 17.5% after that and a VAT rate of 10% on hotel accommodation services and incentives.

Within the bilateral agreements, the General Director of Royal Air Maroc in Spain, Mohamed Amine El Jaouhari, pointed out that “Morocco has been operating in shared code with One World Companies, including Iberia and Vueling, since December 12, 2019, with a single ticket from Palma and Ibiza to the main airports in tourist areas of Morocco.”

The President of the Chamber of Commerce, Antoni Mercant, spoke about the trade balance between Morocco and the Balearic Islands.

“In 2019, imports totalled 2.5 million euros and the most popular products were seeds, fruits, wood products, carpets and leather goods,” he said.

“Exports amounted to 1.6 million euros and focused on the agricultural sector, plastics, ships and aeronautical equipment.”

The Ambassador said “political stability and security in Morocco had boosted foreign investment in all productive sectors." 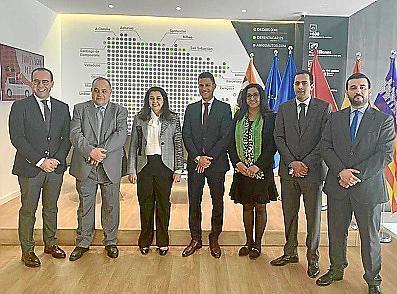 The Moroccan Ambassador to Spain, Karima Benyaich, also visited the OK Group Headquarters in Palma on Thursday, where he was received by the founder and present of the company, Othman Ktiri, and given a first-hand look at the challenges and goals that the group faces in 2020.