A healthcare worker wearing a protective face mask and suit transports a patient from an ambulance to the emergency unit at 12 de Octubre hospital during the coronavirus disease (COVID-19) outbreak in Madrid, Spain March 28, 2020. | REUTERS/Sergio Perez

When Spain’s first case of coronavirus was recorded on Jan. 31 - a German tourist in La Gomera, one of the remote Canary Islands - there seemed little cause for concern.

“We believe that Spain will have, at most, not more than a few diagnosed cases,” Fernando Simon, the country’s health emergency chief, told reporters.

Now, COVID-19, the respiratory disease caused by the virus, has killed more people in Spain than China, where it originated.

Across the globe, the pandemic has swamped health systems and triggered calls for more and better protective equipment for those fighting it. 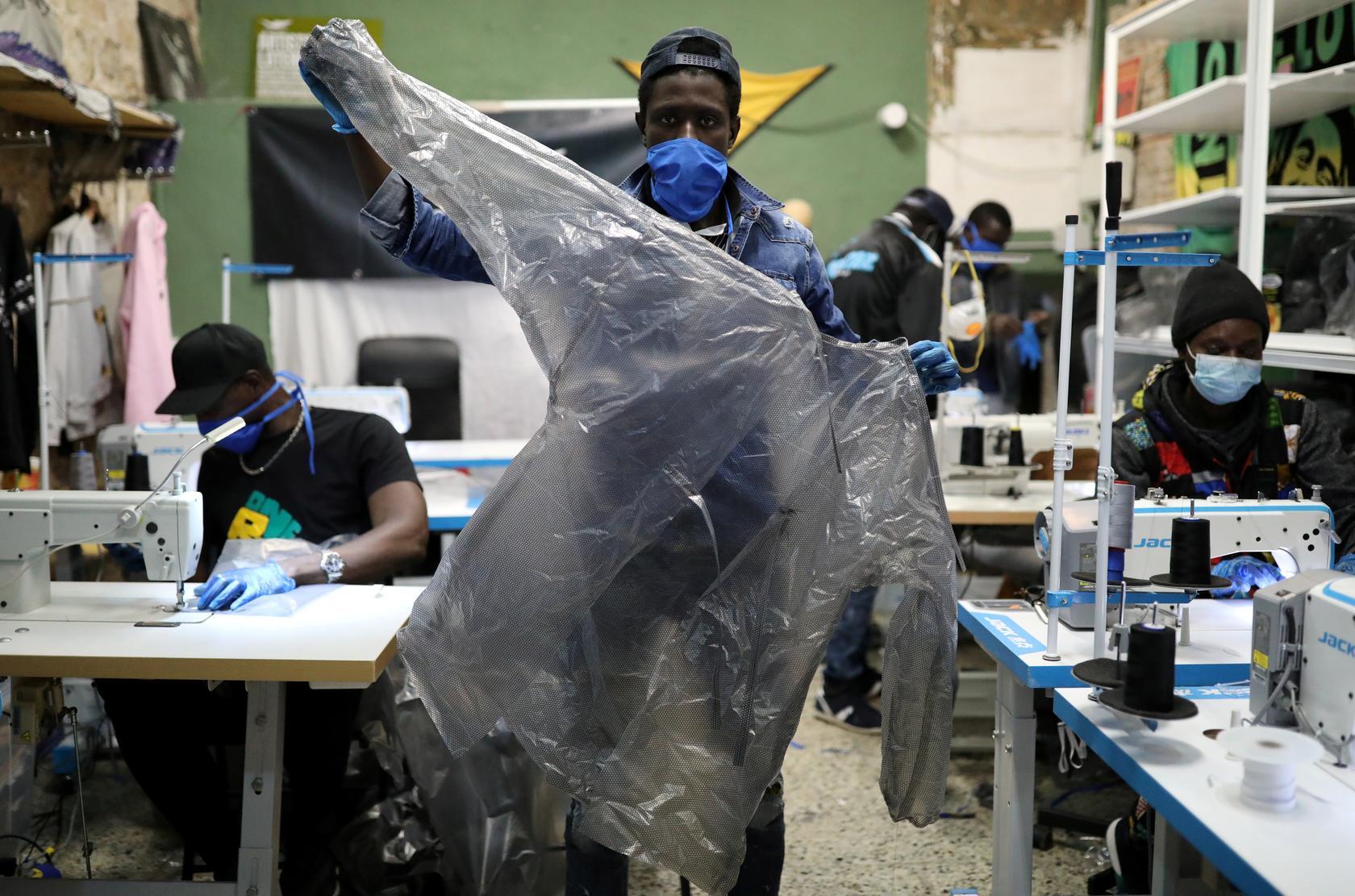 Spain’s doctors and nurses, who have released clips of each other cutting up plastic garbage bags to use as protective clothing, say their situation is worse than many.

More than 15,000 of them are sick or self-isolating and unable to help patients. That’s around 14.7% of the country’s confirmed cases, said a health ministry spokeswoman. One union has said the concentration is higher in the capital Madrid - 21% - the epicentre of the outbreak that has killed more than 9,000 and infected more than 100,000.

Medical workers in Italy, for example, make up just under 10% of reported COVID-19 cases, a smaller share than in Spain - although scientists say the data are not directly comparable because medical staff may not be tested at the same rate.

In a town in Catalonia, as many as one in three medical staff have been out of action because they were infected or self-isolating.

Cellphone footage has aired on Spanish TV and on social media showing patients with oxygen tanks packed into the corridors - some laid out on the corridor floors - of hospitals.

In Spain, unions representing Spain’s medical staff are taking action. Unions have filed lawsuits in at least 10 of Spain’s 17 regions asking judges to compel the authorities to provide equipment within 24 hours in line with health and safety law, said a spokeswoman for the national federation of doctors’ unions, CESM. In Catalonia, the top regional court on Tuesday rejected the 24-hour deadline but said authorities must provide protection measures whenever equipment arrives.

The health ministry said it had always acted on scientific evidence, following experts’ recommendations, and taking steps based on a thorough assessment of the situation at any given time. Health Minister Salvador Illa has said the equipment market was simply overwhelmed, but said on Tuesday the ministry had managed “steady and continuous deliveries” of equipment.

“We feel very proud of what the Spanish healthcare workers are doing,” he told a news conference.

Spain’s health service, like Italy’s, is run at regional level. The central government took control by declaring a state of emergency on March 14, and the authorities are trying to hire thousands of extra staff. But the health ministry - like everyone globally - has struggled to get hold of supplies.

“The explosion of cases in Spain is not normal ... it has been very poorly managed since the beginning,” said Tomas Toranzo, president of CESM, whose members are filing the suits. “The coronavirus infection was underestimated, treated like a mild flu, and it seemed that this would only affect a few elderly.”

Unions say their members were ignored. Already in February, there were signs the virus was spreading, said Angela Fernandez, a Madrid surgeon and deputy secretary of the doctors’ union AMYTS.

She said doctors in major hospitals in Madrid noticed a cluster of unusually severe pneumonia cases that didn’t correspond with the end of the flu season - similar to those that Chinese doctors had recorded on the new coronavirus. But strict protocols limiting testing from Spain’s health ministry prevented doctors nationwide from testing for it.

It took until March 11 for the health ministry to allow doctors to test people who displayed even mild symptoms. Such confusion was widespread globally.

Spain’s health workers, a dozen of whom spoke to Reuters, say they were vulnerable in other ways too.

In mid-February, Jesus Garcia Ramos, the representative for health and safety for Madrid’s nurses’ union, Satse Madrid, asked the regional health authority for extra training to prepare for coronavirus patients, he said. One thing they wanted to know: How to take off protective equipment without infecting the wearer.

He said it took 10 days for the first training sessions to begin on Feb. 25, the date Madrid reported its first case. In some other Madrid hospitals, training didn’t start until the first week of March, he added. By then, the number of cases nationwide had leapt from dozens to hundreds.

The Madrid authority did not respond to requests for comment.

A doctor in Barcelona said he was also ignored.

Josep Maria Puig, who works at Barcelona’s Hospital del Mar, said he suggested to regional health officials from late February that they consider calling up retired health workers and building makeshift hospitals. It took a couple of weeks for them to act - too long, he said.

Puig, who is also secretary general of Metges de Catalunya, Catalonia’s biggest doctors’ union, said Spain wasted crucial time and “failed spectacularly” to get personal protection equipment (PPE) to its own healthcare workers, despite real-time lessons from Italy: “Italy was 10 days ahead of us, which should have allowed us to see where things could be heading.”

A spokesman for Catalonia’s health department did not respond to requests for comment.

On March 18, the central government issued a document outlining “alternative strategies” for staff dealing with the shortage. Adapted from a similar one prepared by America’s Centers for Disease Control, it said staff lacking masks had five options, including re-using masks or only providing them to staff at the highest risk of infection. It also suggested different kinds of aprons and gloves that could be used.

Some nurses have been forced to improvise, fashioning protective clothing from garbage bags, shower caps, or raincoats from a Madrid amusement park.

In the town of Igualada, an hour’s drive north of Barcelona, a local government spokesman said that about one-third of the hospital’s 1,000 staff - all of whom have been tested - have had to self-isolate either because they had symptoms or were in touch with people who may have been.

A total of 98 people in Igualada have died of the disease and, of the more than 600 infected, 154 are healthcare workers, according to the regional health authority.

On March 12, Igualada became the first municipality in Spain to be completely sealed off, following Italy’s example with the northern region of Lombardy. Only those providing vital services can enter or leave.

In Alicante, a Spanish port city popular with tourists, doctor Victor Pedrera said that on March 5, he asked the management of his healthcare centre and the local health authority to cancel all non-essential medical appointments to prepare for the pandemic.

The request was ignored, he said.

“I felt totally helpless, because more and more people with respiratory symptoms were coming,” he said. “It was like a tsunami movie where you see the wave coming and no one is doing anything.”

Only more than two weeks after Pedrera’s request did his clinic totally suspend non-essential appointments, he said.

Valencia’s health authority said it had recommended hospitals set up virtual appointments from early March, and had always acted to minimise the risk for the population.

Infections of healthcare workers have continued to rise.

The health ministry said Simon was not available to comment as he was in isolation. On Tuesday, he connected by video to the government’s daily news conference. He said, “I’m feeling very good. A good night’s sleep has done me good. I have to keep the quarantine even inside my house. I’m in my room and I’m not coming out of it.”

And the U.K. are at least 3 weeks behind Spain. Now Boris and Cummins have minor symptom they have disappeared,no video links to the people. A big learning curve for both Spain and the U.K.,politicians have proved themselves incapable and incompetent in dealing with this pandemic.Still they are not front line workers with inadequate or no protective equipment.Resentment will very quickly start to set in with citizens particularly in the U.K. as no clear messages are coming out of the daily broadcasts,People are dying and there is no clear plan,well done politicians on all parties in the U.K. Best of luck Spain