Image of one of the fincas where the helicopter and microlight fell after colliding in the air. | Redacción Sucesos

"Get out of the water, an aircraft is going to fall on top of us," shouted a mother to her children in a swimming pool after witnessing the mid-air collision between a helicopter and a microlight close to Inca on Sunday lunchtime which claimed the lives of seven people.

Eyewitnesses told the Bulletin this morning that there was a "massive bang". "I heard this strange sound and looked up and saw the helicopter and then it crashed to the ground," they said.

Photo: The Civil Guard, inspecting where the ultralight fell.Inset: The German family that died in the accident. August and Christina Inselkammer, and their children, Max and Sophia. Photo courtesy of Facebook.

The debris from the accident fell close to her home, infact wreckage was discovered just 500 metres away from Inca hospital.

The Balearic government has ordered three days of mourning in honour of the victims; a German family of four, the helicopter pilot and the two people on the microlight which had taken off from an airstrip in Binissalem.

The German family had been celebrating the father´s birthday and the helicopter trip was a special present. The helicopter had collected the family from their hotel in Manacor and was heading for Camp de Mar when the accident occured.

The cause of the accident is not yet known but the wing of the microlight is believed to have touched the helicopter´s main rotar blade. Emergency services were notified of the crash at 1:35 p.m. 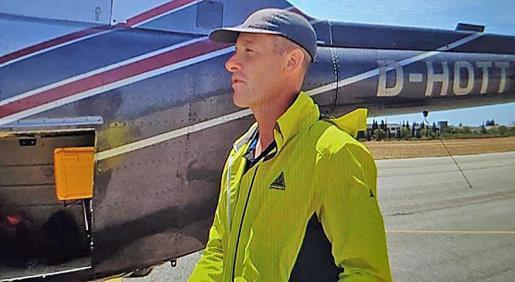 Photo: Cedric Leoni, the pilot of the helicopter.

"My solidarity and love for the families of the victims that lost their lives in this tragic accident," Spanish acting Prime Minister Pedro Sanchez tweeted.