Fatal accident on the Paseo Maritimo

Emergency services at the scene of the accident on Paseo Maritimo, Palma. | A. Sepúlveda

A woman of about 40 years old was run over and killed this afternoon on the Paseo Marítimo, Palma.

A driver lost control of her vehicle, a large BMW, close to the Auditorium, and hit two pedestrians. 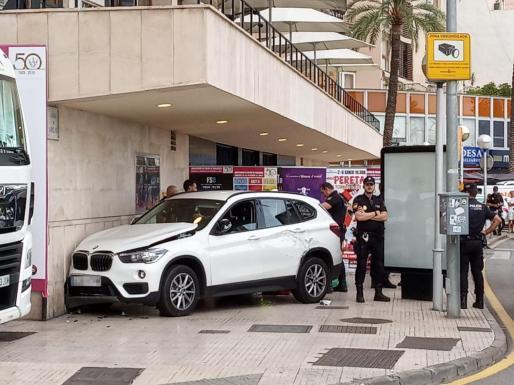 The woman, who was driving at high speed, was stopped by the Local Police and is accused of causing death by dangerous driving.

The incident occured at around 4.20pm this afternoon.

One of the pedestrians suffered multiple injuries and a cardiorespiratory arrest and died at the scene.

The second victim was found unconscious and with severe head injuries, he has been transferred to Son Espases hospital.

John I should add that I was offering a personalised view of driving here, not a statistical one. I feel intimidated driving here, regardless of statistics. Only last week there were 2 bad accidents outside the school (when I say bad, one with the rear wheels ripped off a car sideways - karma because the driver concerned is notorious for speeding by the school). Another day my kids and I were nearly hit by a car on a level crossing, also recently I was tailgated within inches by one of the parents). I hate driving here with my kids in the back. I hate feeling intimidated whenever `I drive. This is what I mean about driving here reducing quality of life. It’s a forcibly induced mindset that we should not have to deal with. So, regardless of statistics I am sure that there are many near misses and incidents not involving death here that go unreported. I loathe driving here.

John so what you recommend in terms of adapting driving style means we should all drive more aggressively? How does that help ?

Sorry but I have to take issue with the statement from Ricky – driving here is dangerous. Taking into account that driving on a public road with other road users is per se potentially a dangerous experience, the measure of that danger is revealed by the road casualty figures. Fatalities per 100.000 inhabitants / fatalities per 100.000 motor vehicles. For Spain the figures are 4.1 / 5.8, the UK is just a little better, 3.1 / 5.7 and France and Italy are just a little worse. However India 16.6 / 130.1 is far more dangerous as are the majority of countries in what we would term the third world. The figures speak for themselves, the more ‘developed’ a country the safer its roads. I have been driving here over forty years and in no way feel threatened or fearful when on the road. Of course there are bad or inconsiderate drivers anywhere. But driving is not a one size fits all around the world. Each country has slightly different styles, road laws and customs. Adapting to the driving style of where you are goes a long way to being happy and staying safe on the roads.John Little

Tragedy. A few weeks ago you published what I thought was an excellent article about dangerous driving here, only for it to be derided as xenophobia by one of your more mis—guided readers. Nothing to do with race, it’s just a fact; driving here IS dangerous. I have driven all over the world and Mallorca ranks worse, to me, than India and Italy. Tailgating is the big sin. For me, it’s probably the worst aspect of living here. My school run is the worst - parents who seem oblivious to the risks to driving at high speed by the school. Unfortunately dash cams here are technically illegal and in any case footage not admissible in court. If the law were to change on this I bet the accident rate would be reduced.