Violence in the streets of Palma

The police are searching for the two men. | R.S.

Agents from the Homicide Group of the National Police, who are in charge of the investigation, say a man was repeatedly kicked and punched by two men and is seriously injured.

The fight reportedly started near the El Rinconcito bar, which was closed at the time.

Two men allegedly threw broken bottles at the victim, then chased him to a traffic light on the opposite side of the road where they continued to hit, kick and punch him until he fell on the ground, then they fled. 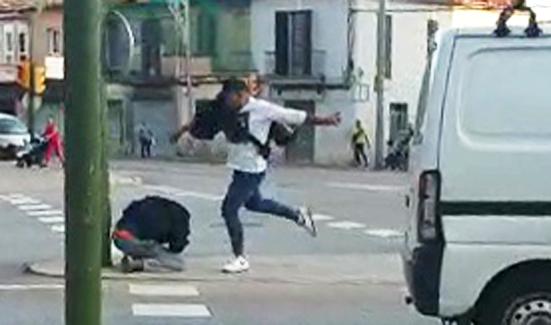 Numerous people called 091 when the incident happened at around 5.30 pm on Sunday and told police that a man was lying unconscious in the street and they thought he'd been stabbed.

Several police officers and two ambulances were deployed to the scene where they found the victim lying on the ground. The paramedics said the patient had suffered a severe head trauma and also appeared to be under the influence of drugs and alcohol.

After initial treatment the victim was transferred to Son Llàtzer hospital where he was sedated and doctors confirmed that no bones were broken.

Police have taken a statement from the victim and are now using video which was recorded by a neighbour on his mobile phone, to try to identify the two men who beat him up.

"Provisional seizure" of yacht in Palma