Pere Garau market traders support tomorrow's lockout in protest against pedestrianisation under the banner ‘It is transferred’. | Ultima Hora

The employers of small and medium-sized businesses Pimeco and Afedeco, and the large Anged stores have issued a joint statement asking the Municipal Government Team to agree with the Commercial Sector, Restaurateurs and Neighbourhood Associations on the mobility policies it?s promoting.

The three Associations claim that the project to pedestrianise the Carrer Nuredduna and the traffic restrictions already in force in Carrer de la Unió, ?are two clear examples of very damaging measures to productive business in these areas.?

Merchants are livid about the pedestrianisation measures already in place in central Palma and will shut their doors for an hour and a half tomorrow to protest against Cort?s mobility policy.

Their actions are supported by Pimeco and Afedeco and other Associations, such as PIMEM and Restoration. 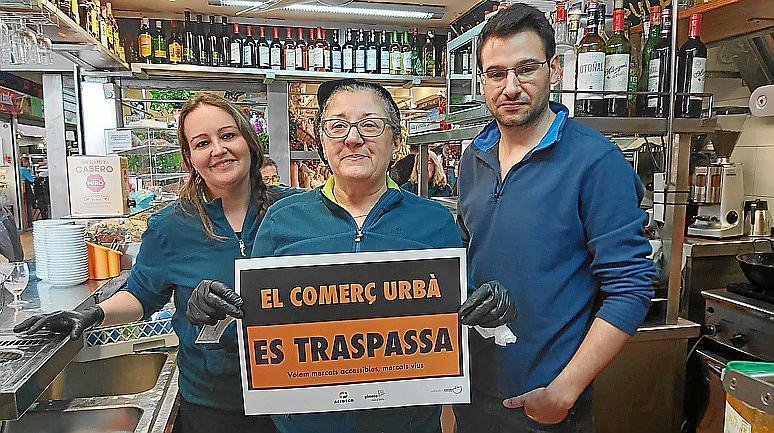 The Association of Merchants said on Tuesday it was in favour of measures to combat climate change and reduce pollution in cities, but only ?through initiatives studied and planned with the sectors involved to minimise the negative impact and avoid possible commercial closures.?

Critics have also complained that it?s becoming increasingly difficult to access Palma city centre by car and by bus, and about the "lack of revitalisation of commercial areas."

Anged, Pimeco and Afedeco claim that the mobility plans "do not include a budget" to counteract the effect they will have on trade.

?? From #Pimeco and @AFEDECO and #aparcaments we want sufficient access to the city centre and punctual and economical public transport that allows people to get to the centre quickly and comfortably. #EsTrapassa #27f @ajuntpalma pic.twitter.com/vkvv1n10to