The spread of coronavirus has decreased slightly in the Balearic Islands.

There was a total of 755 diagnosed cases on Friday, but the disease is multiplying at a slower rate than in the first week of the lockdown and much slower than the rest of Spain.

In the last four days, the number cases detected in the Balearics increased by 1.88% compared to the national level of 1.94% but there’s still a long way to go.

Another four people died in from Covid-19 on Friday, taking the number of fatalities to 26. 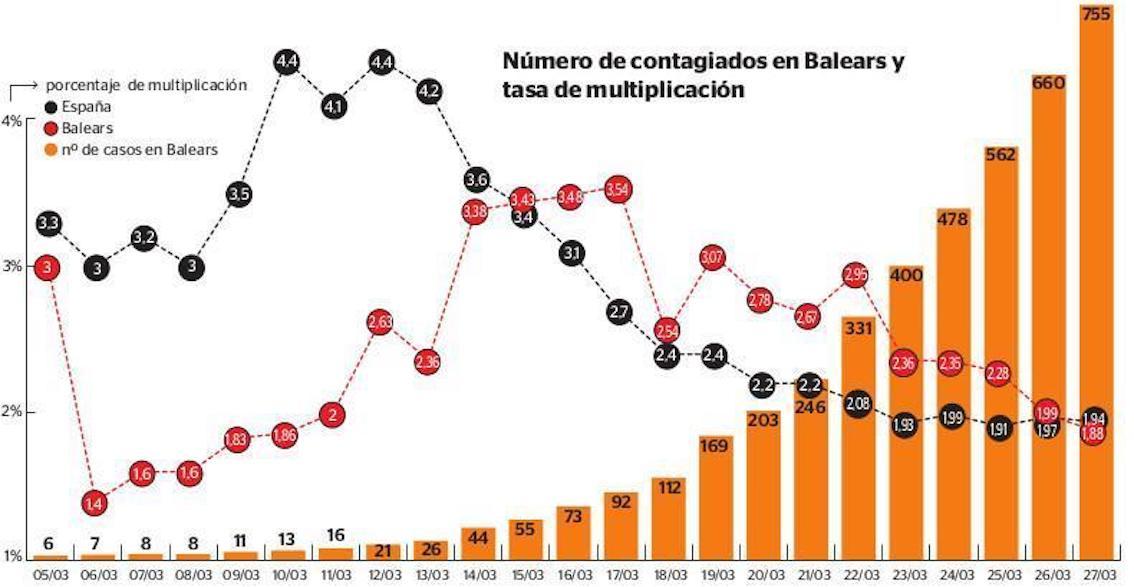 According to the Conselleria de Salut, the largest increase in positives was detected in the Balearic Islands between March 14 and 16 when the number of patients tripled, but since then there has been a constant decline.

This peak transmission speed came five days after the maximum expansion produced between ten and thirteen nationwide and every two days the number of cases doubled, which has never happened in the Balearic Islands.

Between Thursday of last week and this Friday, the number of cases multiplied at a higher rate than the state average in the Balearic Islands.

The number of fatalities in the Balearics multiplied by 1.5% every four days, compared to 2.23% nationally.

More deaths occurred in the middle of the week. Infections increased by 20% from Sunday to Monday, 19% from Tuesday to Wednesday, 17% from Wednesday to Thursday and 14.3% from Thursday to Friday.

"The curve has slowed down in recent days and in the coming weeks we think that the figures will improve,” said Javier Arranz from the Autonomous Committee of Infectious Diseases.

The statistics do look optimistic, but there were four new deaths from coronavirus in the Balearic Islands on Friday.

The three victims were all men between 70 and 80 years old who had underlying illnesses, who died on Thursday night and a 56-year-old woman who died on Friday morning, all at Son Espases Hospital.

A total of 26 people have died, 67 patients have been discharged, there are 662 active registered cases and 75 of them are in Intensive Care.

137 Healthcare Workers who were in contact with patients have been infected with coronavirus and another 430 are under surveillance.

On Thursday, 64 people from Residential Care Homes and 10 from Health Centres tested positive.

10 of the 22 residents at the Es Mercadal Residential Home in Menorca tested positive for coronavirus and at least one person at each of the 13 Nursing Homes in the Balearics has also tested positive.

Many of them have transferred patients to Hospitals or Health Centres in Majorca.

C Thompson | over 2 years ago

Despite the inaccuracies of testing, it is still welcome news that the number of new cases are reducing on the island. However, the financial hardships and increase in taxes that will follow this epidemic are likely to account for many more deaths in the future.

Although this is encouraging, how do we really know. There is so little testing in Spain and or Mallorca, we (the royal we) have no idea how many people are really infected. Same goes for Italy. The death rate there is nearing 10% (6% higher than the WHO has as the death rate of Covid-19), but this rate formula is: deaths divided by infected times 100%. So if you don´t know your true infection rate, your death rate is (ofcourse) high and therefore inaccurate. Germany seems to be the most sensible country in Europe at the moment, as they test and will test millions and millions, so they also know who to isolate and how to get correct figures and act upon it. The incompetent governments of Italy, Spain, France and Portugal acted all way too late and now want Northern Europe to give them money........as always.