Moria Refugee Camp in Lesbos after the fire. | Reuters/Alkis Konstantinidis

The Balearic government says it would be willing to take in refugees from the Moria Camp on the Greek Island of Lesbos, which burned to the ground last week leaving more than 12,000 people without shelter.

A new temporary camp has been set up nearby, but many of the migrants are still sleeping in the streets and nearby fields. 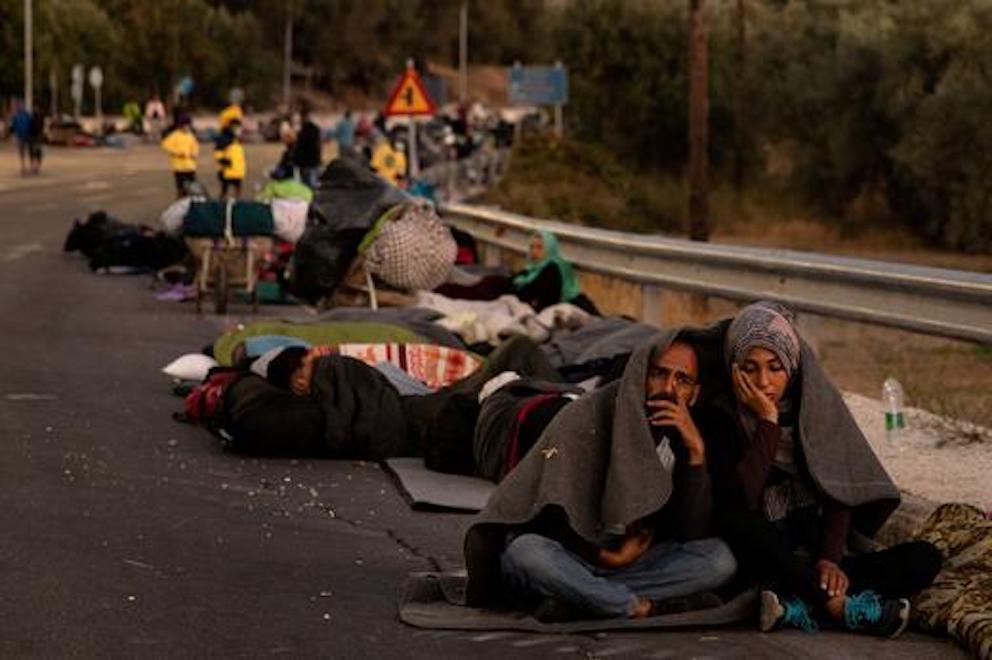 The Moria camp was quarantined after a Somali migrant tested positive for coronavirus last week and since then a total of 35 cases have been confirmed. All of the refugees are being tested for the virus.

Tensions rose on Saturday when some migrants staged a protest on the road to Mytilene Port and Police fired teargas into the crowd.

The Greek Authorities have called on European countries to take some of the refugees.

It will be up to the Central Government to decide whether Spain will open its doors to the migrants and if any will be transferred to the Balearic Islands.

johnG | about 1 year ago

Mark Badoer. I speak fluent Polish and Russian and also my born language of English Canadian as I was born in Vancouver, British Columbia ( that’s western Canada if you care to get your Atlas out ) about a 12 hour flight from Palma to Vancouver via Madrid.... So where does that put me within a country you were not born into? just want to say that you are a legend in your own mind and your mouth wash ain’t making it

Is it just me who disagrees with virtually everything said by Mark Badoer?? Actually given he always has red down votes I just answered my own question.

Each migrant in Mallorca requires housing, food, clothing, medical care, translation services, lawyers, admin staff checking their status, police time etc. etc. The rough rule of thumb is that a migrant sucks up benefits equivalent to paying unemployment benefit to 7 local people. Given there will be literally hundreds of thousands unemployed in Mallorca this winter, is that fair???

Mark Badoer. Lets get something straight, languages or not, Brits living on the Island are mostly home owning retirees, paying taxes, buying goods and services and are huge net contributors to the Island as they don't take locals jobs. Non Brit retirees mostly have a business and employ people and add value. If a Brit is here and doesn't have a job, they tend to leave within a year. Contrast that with your uneducated migrants. Illegal migrants awaiting asylum in the UK cost the tax payer £36k per year and usually it takes years. The cost will be similar in Mallorca. Additionally, without being racist, a lot of North Africans in Mallorca subsist on illegal practices selling knock off goods. That is likely the route most of these non Spanish speaking immigrants will end up. Take a look at the people coming off the boats. Predominantly young and male from the Middle East or Africa who have travelled through multiple countries (where they could have stayed) to reach a Mediterranean port so they can head to Italy/Spain of Greece. They are economic migrants who want something out the system. Mallorca had no money for them. Go to Carrefour or Maisons du Monde in Palma and you will see scores of homeless living in squalor. Go to Son Bugadelles flea market and see some of the poorest people in Europe. We need to look after these people first not chancers from Africa. Finally, 90% of migrants from Africa are muslim, you would think they would try to go to Iraq/Iran/UAE/Egypt/Morocco/Tunisia/Saudia Arabia. They don't because those countries don't want to know and don't hand out benefits left right and center. It is not our job to look after these people, especially not now.

What on earth are they thinking? Whoever thought about bringing immigrants here needs to consider resignation. The tourist industry has suffered enough,people are out of work and that would keep them longer without work.

Totally agree, these unwanted and culturally alien uneducated economic migrants should not be allowed into Europe. We have and will have an even greater local problem in the coming months as the principal industry of the Balearics collapses even further including all those very many ancillary supporting commercial activities.We need to look after our own first. The left wing loonies will simply make our own situation far worse but that's typical of the left they only care for the Marxist ideology and not for the actual welfare of our own

Why do the politician's keep on trying to turn Europe into the Middle East and Africa? If I wanted to live with these people I would go there. Stop importing all these problems. Send them back. We cant support the whole world!

Andy, you make me laugh. How many Brits that live here for years and years speak any Spanish, besides "hola" and "cerveza"? People that speak three languages are tri-lingual, people that speak two languages are bi-lingual and people that speak one language are British.I wish you could experience one day of the life of a migrant. You will shut up forever. From your comfy chair and heated home, you have no clue what is happening with these people and the circumstances they live in. Your comment oozes populist ignorance.

Nigel | about 1 year ago

As if the islands do not have enough problems with illegal immigrants, as reported recently. I don't believe it. To quote a well know saying.

Nailed it Andy. Virtue signalling from a government that cares not one jot for its own people and being English I don't consider myself one of the people. It's the Mallorqians who get my support.