A military hat rests on the coffin of Prince Philip as it is transported by the hearse, a specially modified Land Rover, during the funeral of Britain's Prince Philip, husband of Queen Elizabeth, who died at the age of 99, on the grounds of Windsor Castle in Windsor, Britain, April 17, 2021. Leon Neal/Pool via REUTERS BRITAIN-ROYALS/PHILIP | POOL

Queen Elizabeth and her family paid their last respects to Prince Philip this afternoon at a funeral that celebrated his naval past, his international heritage and seven decades of service in which he helped guide the queen through repeated crises. 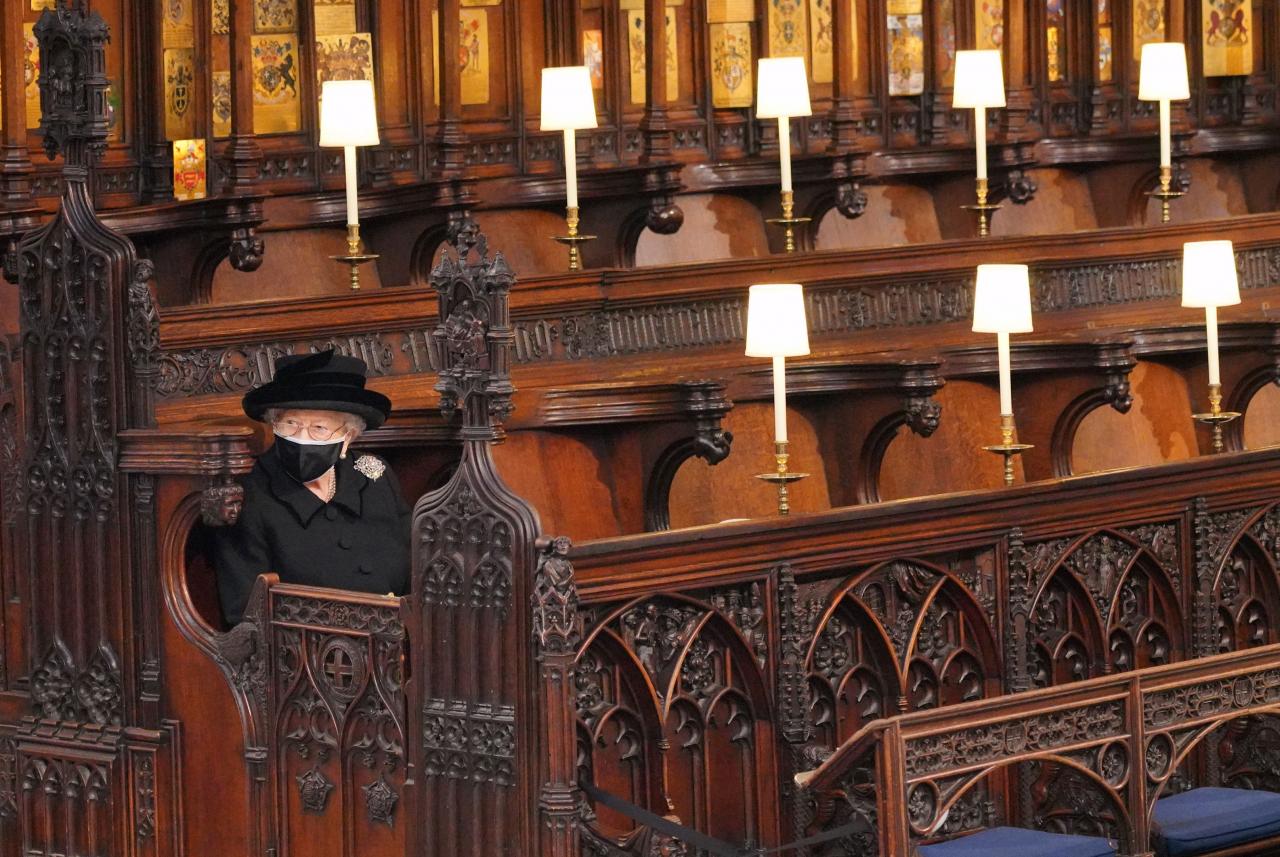 Elizabeth, dressed in black and in a white trimmed black mask, stood alone as the funeral service began in St George's Chapel, which dates back to 1475.

Mourners at the ceremony in Windsor Castle, including Prince Charles and his sons Princes William and Harry, were limited in number and separated due to COVID-19 rules. 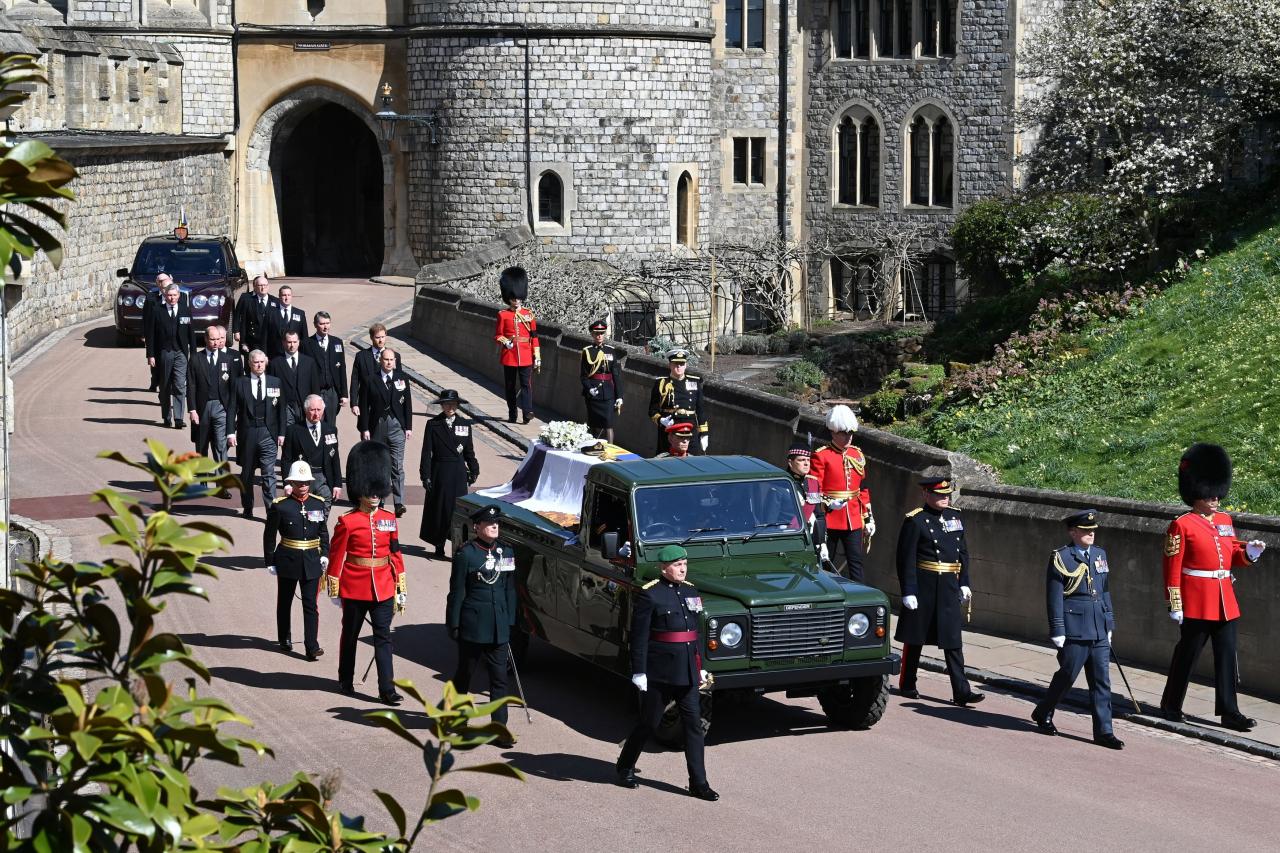 "We are here today in St George’s Chapel to commit into the hands of God the soul of his servant Prince Philip, Duke of Edinburgh," the Dean of Windsor, David Conner, said.

"We have been inspired by his unwavering loyalty to our Queen, by his service to the Nation and the Commonwealth, by his courage, fortitude and faith."

After the nation observed a minute's silence in brilliant sunshine, Harry and William took up their places on opposite sides of the chapel with the final resting place of Tudor monarch Henry VIII dividing them.

Philip, officially known as the Duke of Edinburgh, died aged 99 on April 9. The queen in 1997 described Philip as her "strength and stay" over their decades of marriage.

His naval cap and sword lay on top of the coffin, which was covered with the Duke of Edinburgh's personal standard featuring the Danish coat of arms, the Greek cross, Edinburgh Castle and the stripes of the Mountbatten family.

The choir sang a sailors' hymn, "Eternal Father, Strong to Save", and shortly before he is lowered into the Royal Vault, the Russian "Kontakion of the Departed", a hymn of the Orthodox and Eastern churches, will echo around the ancient church.

Philip's coffin was borne to the chapel on a bespoke Defender TD 130 in military green as a minute gun fired eight times.

Before the procession, military bands spaced out across the quadrangle of Windsor Castle to play the prince's chosen music, including "I Vow To Thee My Country,", "Jerusalem" and "Nimrod".

Philip, who married Elizabeth in 1947, helped the young queen adapt the monarchy to the changing world of the post-World War Two era as the loss of empire and the decline of deference challenged the world's most prominent royal family.

She has now been widowed just as she grapples with one of the gravest crises to hit the royal family in decades - allegations of racism and neglect by it from her grandson Harry and his American-born wife Meghan.

The palace emphasised beforehand that while the occasion would have the due pageantry that marks the passing of a senior royal, it remained an occasion for a mourning family to mark the passing of a husband, father, grandfather and great-grandfather.

There were just 30 mourners inside the chapel for the service because of continuing coronavirus restrictions in Britain. 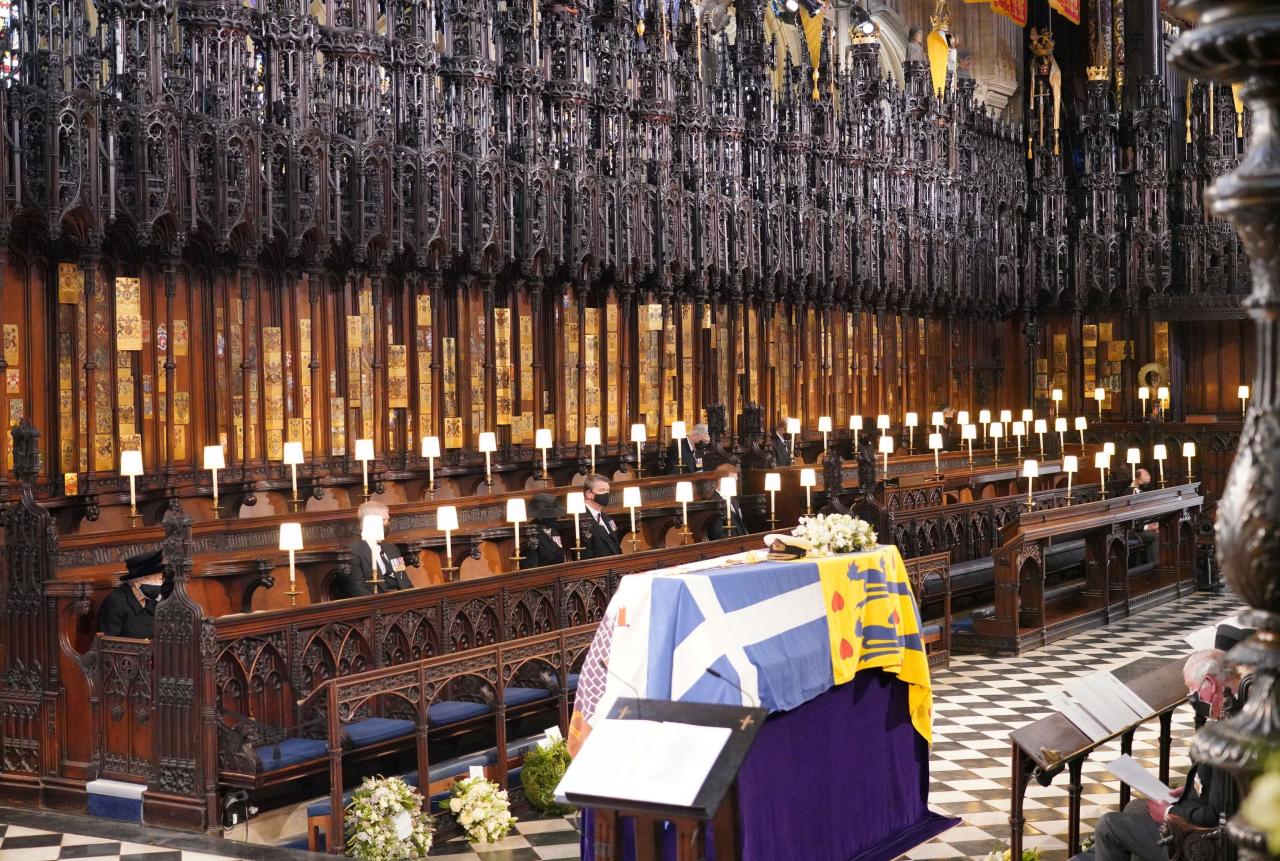 Philip's dedication to his duty earned him widespread popularity in Britain, but he was also criticised by some for a number of off-the-cuff racist or abrupt comments which shocked princes, priests and presidents.

"He was authentically himself, with a seriously sharp wit, and could hold the attention of any room due to his charm and also because you never knew what he might say next," Harry said of his grandfather.

Philip was a decorated Royal Navy veteran of World War Two and his funeral, much of which was planned in meticulous detail by the prince himself, will have a strong military feel, with personnel from across the armed forces playing prominent roles.

Never understood the need to say something negative like Mike has at an occasion like this, maybe it makes you feel good getting responses, or just attention, something is missing in your life ... sad little fella

Shuggie | about 1 year ago

No country in the world can do a send off with such style, dignity, professionalism and class as the UK.

johnj | about 1 year ago

I have always had total respect for Phillip and the Queen. He made a few gaffs which made him more human I feel but thats why everyone liked him. A total rock for the Queen and will be sadly missed.

A fitting farewell to a truly remarkable man who dedicated his whole adult life to the service of H.M. The Queen, the country and the Commonwealth. A desperately sad day for the The Queen, especially having to sit alone in the chapel. One positive thing that has come from this sad moment is that the younger generations have learnt about the truly remarkable and selfless life he led rather than just knowing him for the occasional gaffe. I have always had nothing but admiration for the Duke of Edinburgh; my father who died last year, also aged 99, attended Cheam School with him - I have a school photograph in which they both appear. An immense character who will be sorely missed.

A very moving service broadcast around the world. Everyone must feel so very sad for The Queen. Millions have greatly benefited in taking part in The Duke of Edinburghs’ Award Scheme, a lasting legacy.