The Rueben brothers have become one of Mallorca's biggest land-owners buying sizeable plots across the island. But who are the two brothers who now own 13 kilometres of Mallorca coastline?

The brothers were born in Bombay, British India, the sons of David Sassoon Reuben and Nancy Reuben, a prosperous Baghdadi Jewish family. The brothers arrived in London in the 1950s with their mother, Nancy, and lived in Islington; having run various businesses across the Indian Subcontinent from their bases in Bombay and Baghdad. The brothers attended state schools, with Simon never completing his formal education.

David joined a scrap metals business while Simon started out in carpets. Simon went on to buy out England's oldest carpet company from the receivers and made enough money from it to start investing in property, with early investments on Walton Street and the King's Road in Chelsea. The brothers increased their wealth during the 1970s and 1980s in both metals trading and property. Nearly half their fortune is in liquid assets such as cash and bonds. They avoid publicity.

In the early 1990s, the brothers invested in the Russian metals market, financing significantly the production and distribution of metals. The Reubens became the world's third-biggest producer of aluminum. At its peak, their company, Trans-World Metals, and its associates controlled five-to-seven percent of the world's aluminum output. When Russian aluminum smelters were incapacitated by debt, Trans World entered into tolling arrangements with factories in which they paid for and delivered raw materials in return for finished aluminum, which it then sold for profit. The company's investment in Russia was US$1.5 billion (GB£870 million), with global sales in 1995 topping US$8 billion. The brothers were involved with several members of the country's new oligarchy, including Roman Abramovich. Subsequently, they settled a multimillion-pound legal dispute with Oleg Deripaska which resulted in a substantial settlement being awarded to Reuben Brothers.

In 2008, the Reuben brothers returned to the commodity business, expanding their mining interests with a portfolio of mines in Morocco, Indonesia and South Africa.

By 2000, the Russian business environment resulted in the brothers selling all their Russian assets as they focused their business activities mainly in the UK property market, where they have a substantial portfolio of debt-free assets. With others, they have been involved in financing a number of major acquisitions and also have investments in technology companies. As of 2016 their business activities mainly involved real estate, both in the UK and abroad, venture capital, and private equity.

Other investments and developments include Merchant Square, a 1,800,000 sq ft (170,000 m2) development scheme of offices and flats, in the Paddington area of London; Park Plaza Hotels & Resorts, a 50/50 joint venture in a new apart-hotel under the 'art'otel' brand in Hoxton, City of London; Hampton House, demolition and redevelopment of the 1960s office block opposite Tate Britain that was designed by Foster & Partners and features a mix of apartments and an apart-hotel on the River Thames next to the Park Plaza London Riverbank hotel; airports at London Oxford and London Heliport. In 2006 the Reuben Brother formed a partnership that injected private equity into the FTSE-listed McCarthy & Stone, a retirement home construction company, and divested the investment in 2013.

Via both companies, the Reuben Brothers continue to be one of the largest investors in luxury leisure group Belmond Ltd. Other holdings include Travelodge Hotels; D2 Jeans and Blue Inc clothing retailers, with retailer Sir Stuart Rose; Luup and Metro Bank; The Wellington Pub Company, the largest free-of-tie pub estate in the UK with approximately 850 tenanted pubs; Global Switch, the largest wholesale carrier neutral data centre provider in Europe and the Asia-Pacific region; Arena Leisure and Northern Racing merged forming ARC (Arena Racing Company) which represents 40% of UK fixtures and a 45% stake in At The Races (ATR), the broadcaster taking UK and Irish racing to domestic & international audience; and a joint venture with British Marine, that in 2014 had eight vessels with plans to double the fleet size.

In 2006 Ken Livingstone, the Mayor of London at the time, used a press conference to accuse Simon and David Reuben of jeopardising the £4 billion Olympic City development, in which the Reuben brothers held a 50% stake. Livingstone controversially told the media conference, referring to the Reuben brothers, that "If they're not happy here, they can go back to Iran and try their luck with the ayatollahs, if they don't like the planning regime or my approach." After a public complaint and a subsequent official investigation into Livingstone's comments that were alleged to be anti-semitic, the investigating officer dismissed the complaint and concluded that Livingstone had reason to be strongly critical of his understanding of the Reuben brothers' conduct, and that his criticism, whilst robust, was reasonable in the circumstances.

The family's philanthropic vehicle, the Reuben Foundation, is focused on the advancement of healthcare and education.

The family founded the Nancy Reuben Primary School, an independent Jewish day school in Hendon in honour of their mother.

The foundation has donated £80 million to support the creation of Reuben College, originally named Parks College. It will be a post-graduate college focused on climate change, artificial intelligence and cellular life.

According to the Sunday Times Rich List 2020, David and Simon Reuben and their family had an estimated personal net worth of £16 billion, a decrease of £2.664 billion on the previous year. This makes them Britain's second wealthiest family.

The Reuben's net worth has progressively increased over the last decade. The Times has reported that the brothers' businesses make extensive use of offshore tax havens. A spokesperson said that their businesses "fully comply with UK tax laws".

The brothers are regular donors to the Conservative Party.

Below is map showing all the properties the Reuben brothers own on Mallorca. The ones in blue are previous adquisitions. In red are the new ones. 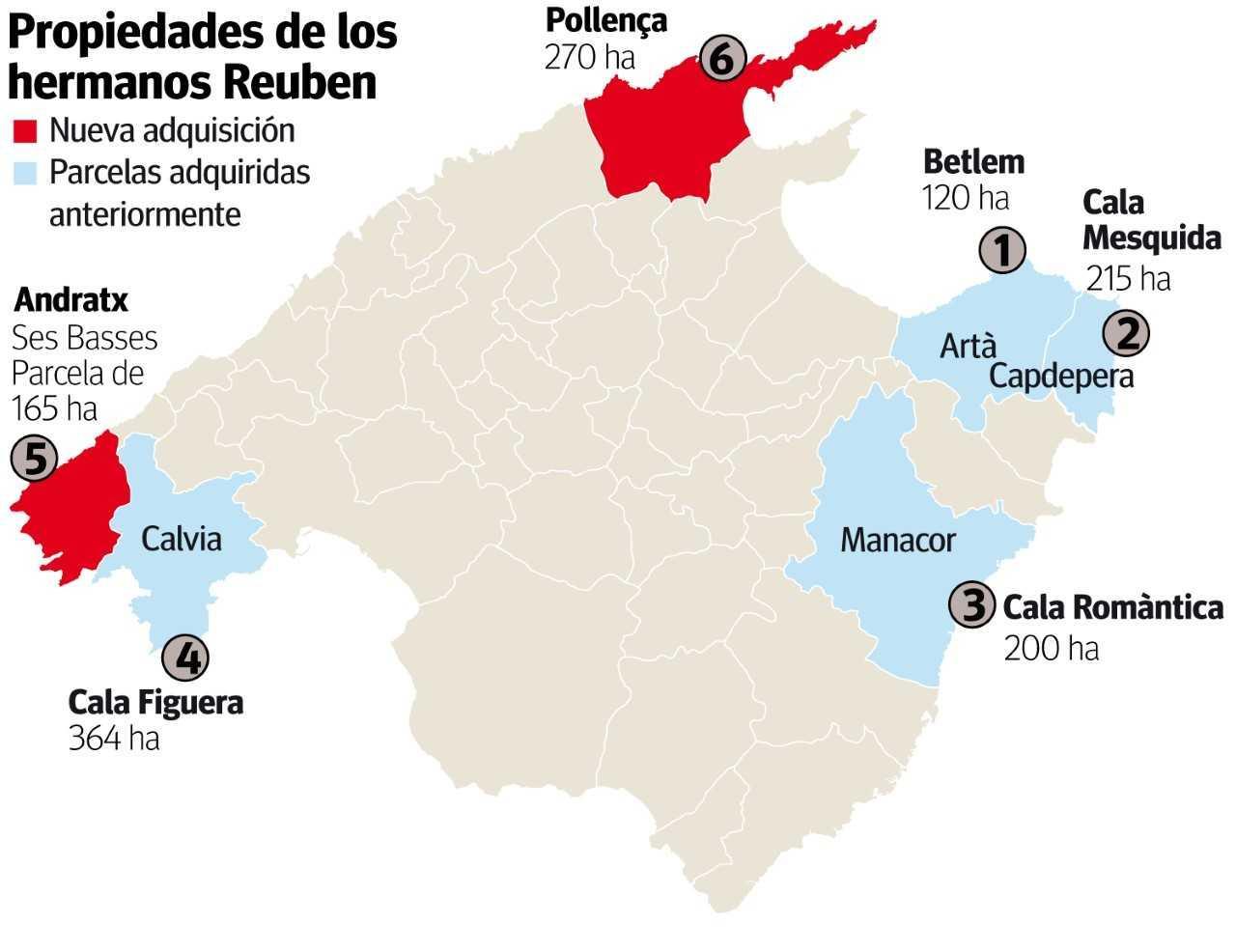