Government expecting an extra €7 million in traffic fines in 2022

Palma City Council's budget of 475,490,000 euros for 2022 was approved by the Governing Board on Monday and will be ratified by the plenary next week.

“It reflects the new reality after two years of pandemic," said Mayor, José Hila. "The last two years have been very complex for the city and the Council, which has had to manage a pandemic and been forced to allocate many resources to Covid-19.”

"Next year we will have more money despite not raising taxes, because our share of state taxes has grown, but we maintain the income from capital gains of 25 million euros from a normal year and we foresee more works, therefore more income from the 2 million euro construction tax and from 1 million euros from urban fees. The income forecast for sanctions for the recovery of mobility also increases because we are going to have more Police on the street and one of their objectives is to punish uncivilised behaviour,” said Mayor Hila.

The Council expects to make more than 20 million euros in traffic fines next year.

Hisenda Councillor, Adrián García, estimates that an extra 7 million euros in traffic fines will be collected, taking the total to 20.5 million.

"The accounts will go up despite the fact that Municipal debt is falling,” he said. “In 2015 it was 352 million euros and in 2022 it will be 195 million euros, according to the forecast.” 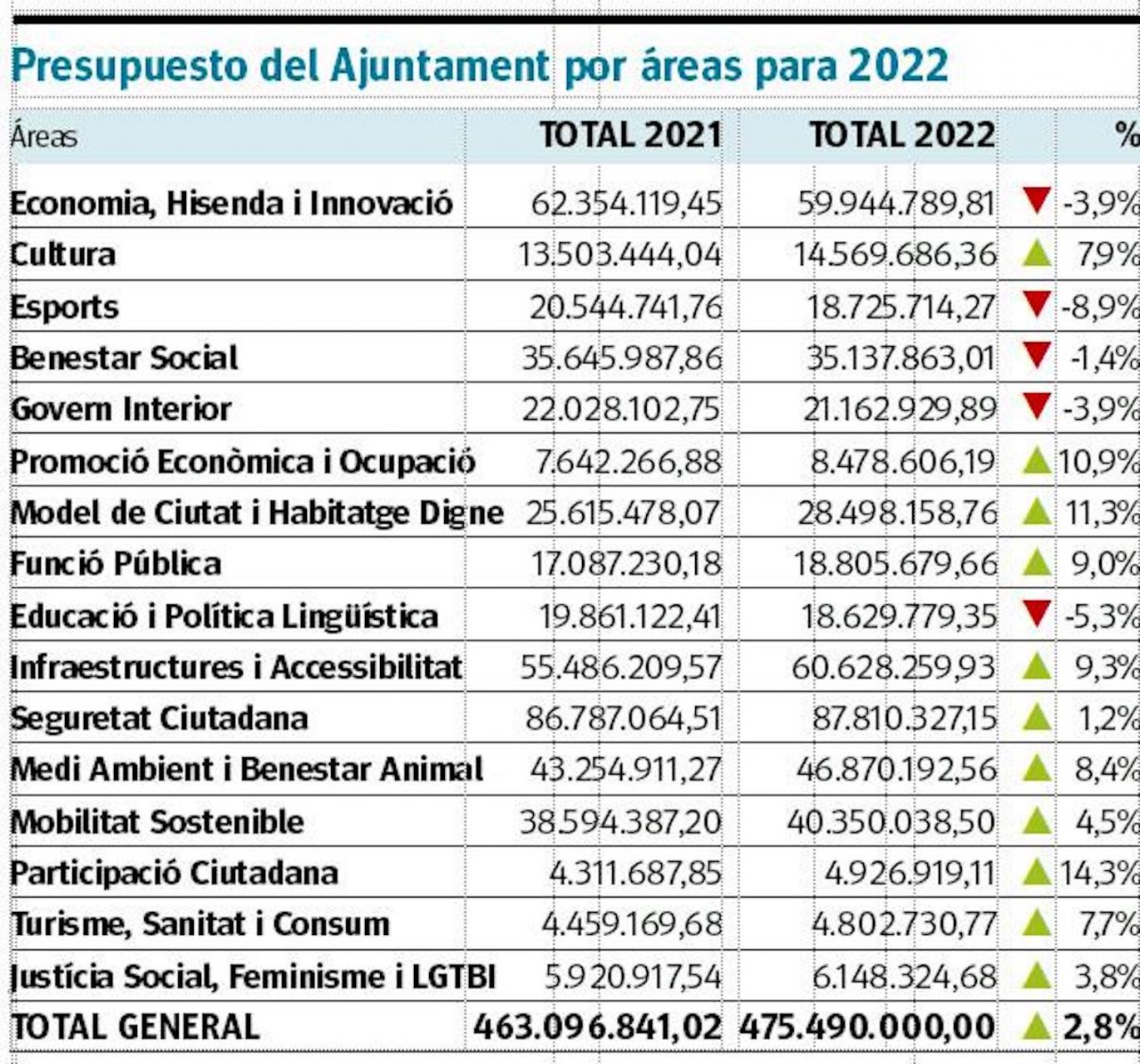 “7.4 million euros will be used for aid to vulnerable families, up from 4 million in a normal year; the Anti-Eviction Office gets an additional 230,000 euros taking the total to 440,000 euros; an additional 1 million euros will be given to Social Justice to combat gender violence; 2 million will go to the Economic Sector and 300,000 has been allocated to promoting Palma as a tourist destination," said Mayor Hila.

"Palma Works will get 13 million euros. The Cleaning budget increases from 16 to 20 million and Infrastructures get an extra 7.5 million euros to repair pavements, plant trees, asphalt the streets, improve lighting and make improvements to parks and fountains. 2.5 million euros has been earmarked for pavement renovations in Plaça d'Espanya," explained Mayor Hila.

Also within the ‘Palma works’ there is an increase of 1.5 million euros for citizen security for new Police officers and the purchase of vehicles.

In other areas, the Culture budget increases by almost a million euros to reinforce municipal museums and cultural programming. Participació Ciutadana gets more than 600,000 euros and 850,000 has been allocated to the Sant Sebastià festivities in 2023 and Medi Ambient or Mobilitat Sostenible will get an extra 3 million euros.

once again councils all around the world are treating the everyday motorist as CASH COWS its about time we motorists said ENOUGH IS ENOUGH we pay are way in taxes for using our cars on roads that we pay for out of those taxes why should councils say they are going to get more money in fines, how do they know this a year in advance unless some underhand dealings are going on especially in Mallorca with on the spot fines and more cameras. how can Hisenda Councillor, Adrián García, estimate the rise unless he /she knows something the motorists of Mallorca dont know.