Palma thinks green with ecological corridors to oxygenate the city

The new General Plan of Palma includes in its proposal four new large green areas that, if approved, will oxygenate the city and allow it to have several ecological corridors that will cross it from the suburbs to the sea. The idea of the project, in line with European regulations, is to set up a network of parks or green spaces that will connect the different parts of the city centre by taking advantage of newly built areas, which will have to be adapted to the regulations, or by using the banks of streams.

The document proposes the creation of a large green area between the Son Moix stadium and Son Ximelis called Son Roca corridor. This land is partly developable but future developments will have to respect an ecological strip that will eventually end, associated with the torrent of sa Riera and the so-called Falca Verda.

The second major proposal of the Plan foresees another large linear park taking advantage of the banks of the Torrent Gros, from the boundary between Palma and Marratxí to the sea. The current Plan, which dates from 1998, allows the construction of buildings near the torrents, but with the new regulations this will be prohibited as it will be declared as undevelopable. "The idea is to avoid the overflows that construction in or near the torrents can create and, at the same time, to recover resources since, in case of heavy rains, the water will filter through these reforested areas and reach the aquifers," says Gabriel Horrach, general director of Urban Planning at Palma town hall. 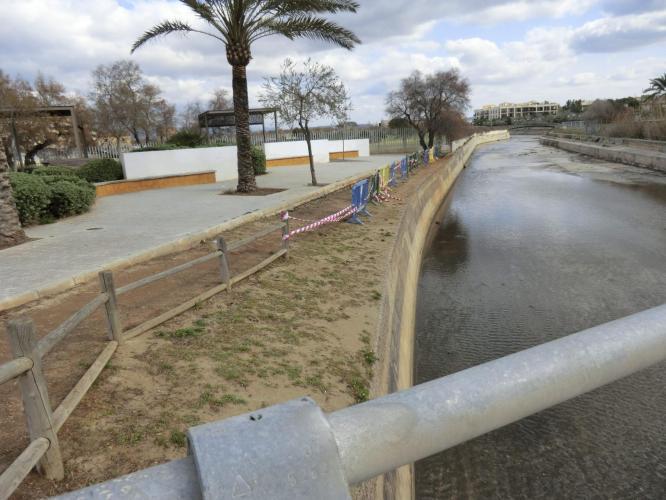 The banks of the Torrent Gros will become a linear park. Credit: Juan Miguel Giménez

The third large natural area planned will be located in the Vivero area, in Son Ametler, where a space will be created that will end up linked to the Torrent Gros corridor mentioned above.

Finally, in the Llevant area, an ecological corridor will be created next to Son Güells and the Torrent de na Bàrbara which, like the others, aims to increase the environmental value of the district by taking advantage of the new constructions to link the parks that will be created. "With this urban planning the future developments that are made will allow us to move from isolated green areas to green areas connected between them," Horrach assures.

The general director of Urban planning explains the philosophy of the General Plan, the concept of 'Environmental Justice' that guarantees access to green areas to all neighbourhoods of the municipality, he points out the importance of the urban green connectors, streets with sufficient width, he speaks of 20 metres, which will link with the large green corridors and create an ecological structure in the form of a spider web over the city. Another advantage of these connectors is that they will reduce dependence on private vehicles as they will be formed by landscaped spaces and streets for pedestrians and bicycles.

Tourist who dived into Magalluf pool was egged on by friends

Ring of steel in Mallorca this summer