Processionary caterpillars already on the march

The appearance of the processionary caterpillar (Thaumetopoea pityocampa) affecting pine trees is early this year due to a lack of rain and high daytime temperatures.

The pine trees of gardens, parks and forests have an abundance of nests in some parts of Mallorca and the caterpillars have already descended from the trees, this usually happens in early March coinciding with the beginning of spring.

In some areas of the island the web-like nests of caterpillars have been removed to prevent further proliferation. This season Palma council has removed nests manually during the month of January, before the caterpillars come out, in areas such as the forest of Son Quint, es Carnatge and also in the forest of Bellver in the area near the roads and the playground. 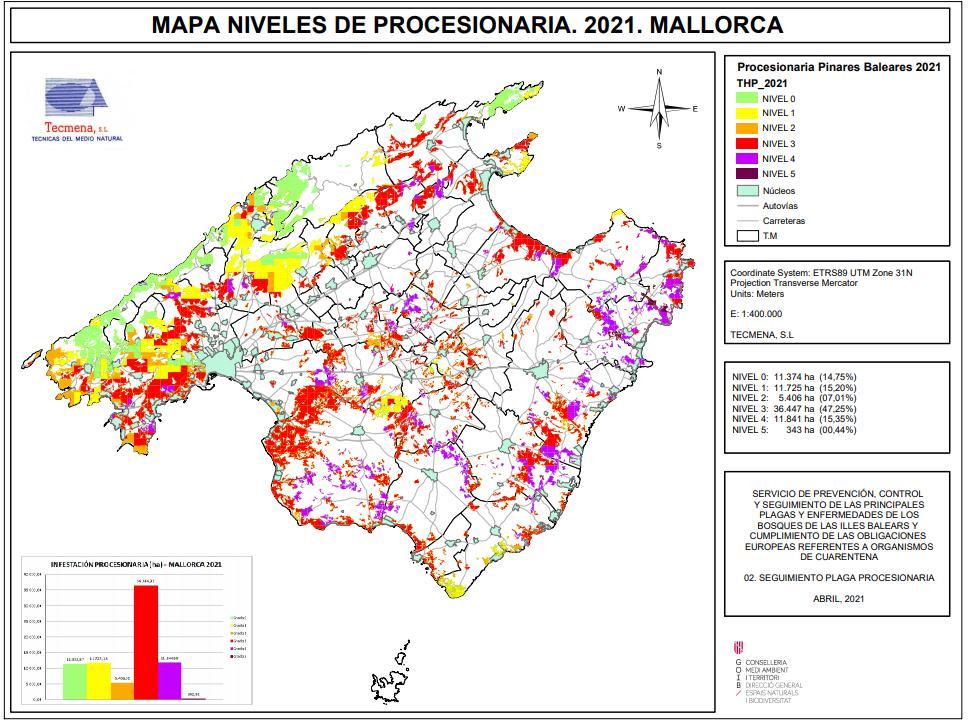 For its part, the Ministry for the Environment began in September, in accordance with the life cycle of the processionary, the treatment in public estates, recreational areas, trees, shelters, chapels and sanctuaries of the Islands.

The ministry recommends, especially during the month of January and early February, to manually remove the nests from the trees on private property. Forestry Services advises to remove them from the lower parts of the pines by pruning, making sure you are always protected.

In the upper parts, the nests can be shot from the trees, although authorisation is required. During the removal, contact with the caterpillar should be avoided at all times and, once removed, they should be completely burned.

It should be remembered that, in addition to the damage they cause to pine trees, the processionary caterpillar can cause serious health problems for people and animals. Each caterpillar has some 500,000 trichomes (small hairs) along its body which, when in contact with the skin, can cause various allergic reactions due to the release of histamine. In the case of animals, if the caterpillar is ingested, it can be lethal and even lead to death. In case of a severe allergic reaction, a doctor or, in the case of pets, a veterinarian should be consulted promptly.