"In connection with the approach of active hostilities, residents of Obolon district are asked not to go outside,"

Ukrainian forces downed an enemy aircraft over Kyiv in the early hours of Friday, which then crashed into a residential building and set it on fire, said Anton Herashchenko, an adviser to the interior minister.

It was unclear whether the aircraft was manned or whether it could be a missile. Kyiv municipal authorities said at least eight people were injured when the object crashed into an apartment block.

"Horrific Russian rocket strikes on Kyiv," he wrote on Twitter. "Last time our capital experienced anything like this was in 1941 when it was attacked by Nazi Germany."

A series of explosions were heard in Kyiv earlier, which Herashchenko said were the sounds of air defences firing at the aircraft. Further explosions could be heard just before dawn, a Reuters witness said. 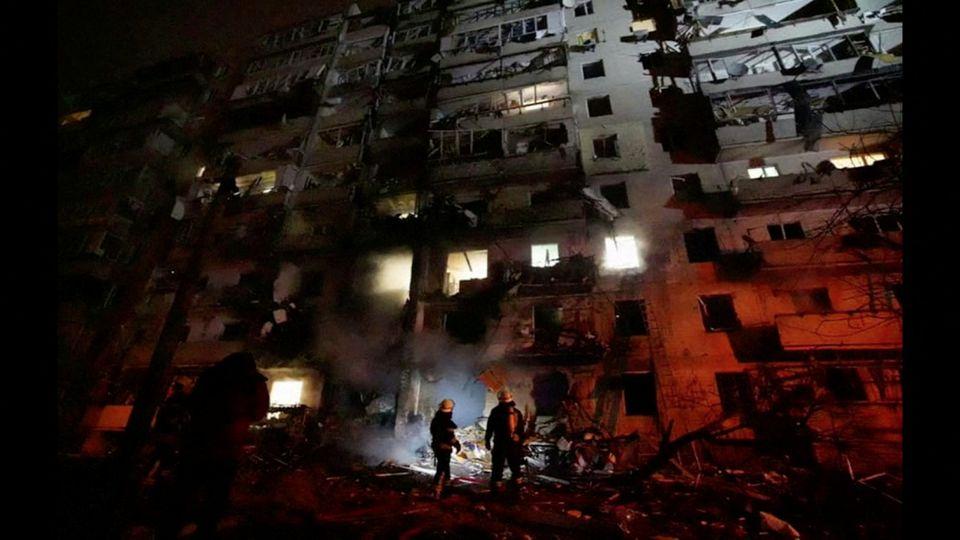 Authorities said intense fighting was under way on Friday morning in the city of Sumy in the country's northeast, while a border post in the southeastern Zaporizhzhya region had been hit by missiles, causing deaths and injuries among border guards.

The same source told Russian media that the aircraft downed over Kyiv on Friday morning was a Ukrainian fighter jet hit by friendly fire.

Ukraine's chiefs of staff said on Friday Russia was using the Gomel airfield in Belarus to line up troops to assault Kyiv due to damage to the Hostomel military airport near the Ukrainian capital.

"In order to intimidate the population of Ukraine, the enemy is increasingly choosing to destroy civilian infrastructure and housing," the General Staff of the Armed Forces of Ukraine said in a Facebook statement.

It said Russian troops were advancing on Kyiv from several directions as Ukrainian forces battled around Mariupol in the south and Kharkiv in the north-east of the country.

Kyiv authorities told residents of the north-western Obolon area on Friday to stay off the streets given "active hostilities" were approaching.

"In connection with the approach of active hostilities, residents of Obolon district are asked not to go outside," city council said in an alert.