"We will show the Russians the door"

Kristina Reznik is only 24 but she comes across as a strong woman who has already lived a hard and punishing life. Home is Melitopol, one of the first Ukrainian cities to have been occupied by the Russians within hours of the invasion.

“The Russians moved over the border at 5am, they had captured my city and were flying their flags by midday,” she told the Bulletin this week.

On March 11, Ivan Fedorov, Melitopol’s mayor, was kidnapped by Russian troops. He has since been released and awarded one of Ukraine’s highest medals for his bravery for standing up to the Russian invaders.

Her 47-year-old mother Irena and her youngest sister, Anastasia aged 15, are still living in the city. Her 19-year-old sister Margarita managed to flee, and after an arduous and dangerous five days arrived in Majorca just two days ago. But the rest of the family are trapped.

Well, that is not exactly true. Her father, who she once adored and looked up to as a hero, is now living in Moscow and has taken up Russian citizenship.

“When I first came to Spain, to Barcelona nearly four years ago, I would call him maybe three times a day. I was all alone and needed his support. He is, or rather was, very wise and we were very close, he was a great help, he was my rock. He and my mother divorced nine years ago and he married a Russian, hence why he lives in Moscow and has Russian papers. But he was a very clever man, he was a company director. But when I called him in tears on February 24 I could not believe what I heard.

“He asked me why I was crying and I explained it was because of the invasion and the bombings.

“He told me there was no need to cry and that Putin was only trying to help rid Ukraine of the Nazis and the fascists who were raping and abusing Ukrainian women. He said it was a simple military operation and that only military bases would be hit, that civilians would not be targeted. I could not believe that someone as intelligent as my father could have been brainwashed like the rest of the Russian population. I hung up and have not spoken to him since, I don’t think I ever will again.

“Putin has been preparing his people for a long time for this war and it looks like most Russians have fallen for it. Those who haven’t, I feel sorry for because they have no voice. They can’t protest or they will be arrested and jailed,” she said.

Kristina left Ukraine because ever since Russia invaded and subsequently annexed the Crimean Peninsula from Ukraine in February 2014, tensions began to mount in Ukraine.

“I think we all knew that something bigger was going to happen sooner or later and then in 2018 a number of cities, including Melitopol, were put on a state of alarm and we were given air raid siren drills. At the time I thought a Russian invasion was imminent so I decided to come to Spain. My mother agreed, the further away I was from Ukraine the better. Trouble is, the invasion happened later than I expected, but I did not return because we all knew it was coming.

“I moved to Majorca in July after having found a better job to the one I had in Barcelona. I look after elderly people. I work nights and then spend as much of the day as possible helping the Ukrainian Association in Mallorca. I am now helping at the old fire station on the Son Castello industrial estate the council gave us because the Ukrainian Church is too small for all of the donations we are receiving.

“We are open from 9am to 6pm Monday to Saturdays as a drop-off point and the aid continues to flood in. I can’t believe how supportive the general public in Mallorca and across Spain have been. I have never seen so many grown men and women cry. So many come in with dark glasses on and leave so quickly. I don’t even have time to thank them, they rush out in tears.

“The other day we were invited to go and talk at a local school which is collecting aid for us. It was overwhelming. Children as young as four were crying and they were all shouting ‘Viva España, Viva Ukraine’. They all wanted to hug and kiss us, they were flying my flag and some had made their own in support of Ukraine and allowed me to keep them. It was truly amazing and it is something the Ukrainians will never forget.

“We will always be with Spain and will help Spain should they ever need us,” she said. 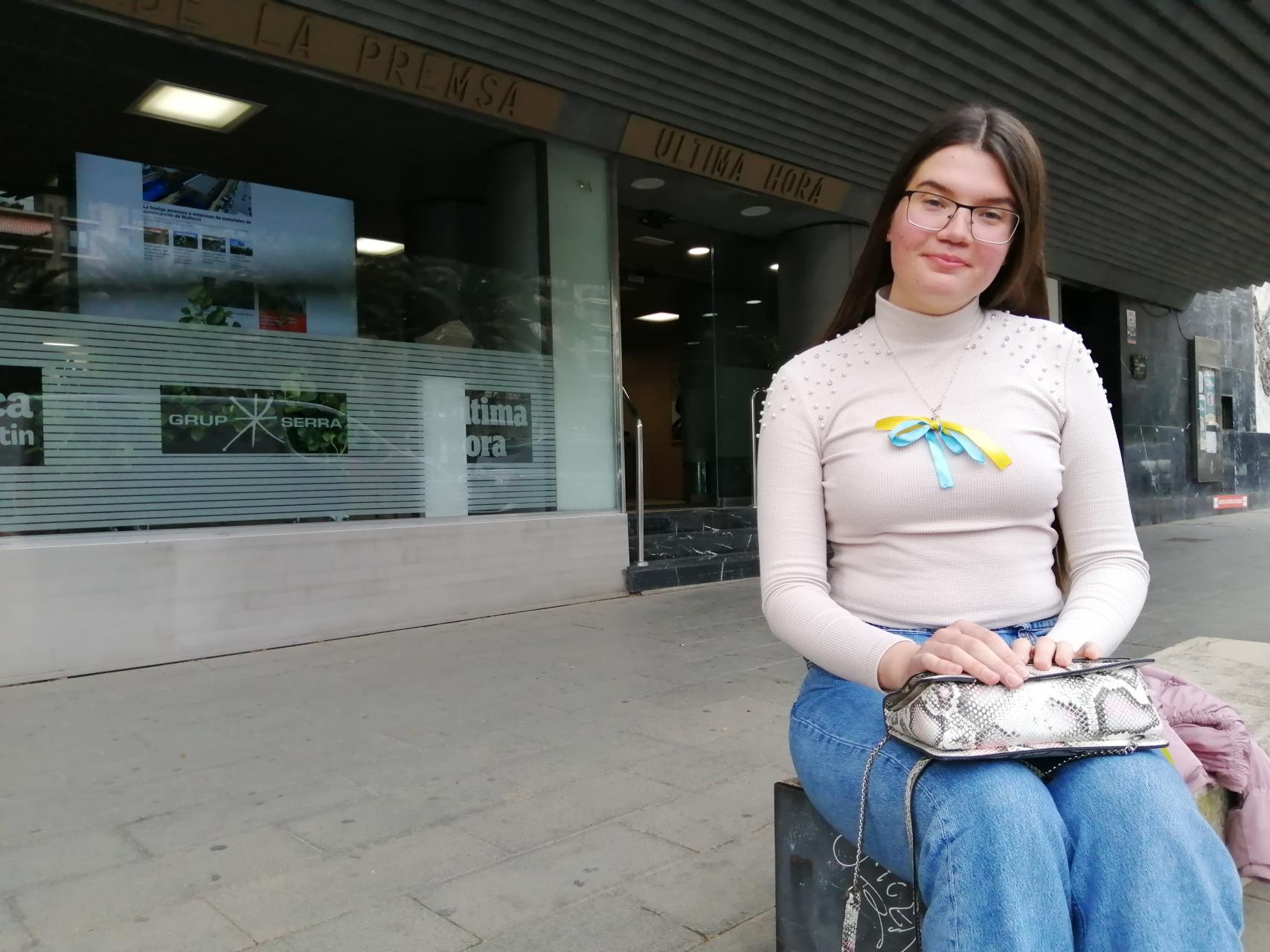 “But I’m not crying any more. I cried so much during the first few days of the war I have no tears left. I don’t think I will be able to cry again in my life. Plus I’m neither sad nor angry because I know that Ukraine will win, with or without the full support of the rest of Europe. Like my president has said, if they don’t really want to help and impose a no-fly zone, for example, that’s fine. We’ll do it ourselves and as every day passes and the war continues, I know we will win.

“We have God on our side and the sprit of the Ukrainians.

“We have done nothing wrong. We didn’t kick down the door of our neighbour’s house and storm in, rape the women, open the fridge and eat all the food and make ourselves at home. They’ve broken into the wrong house and they have two options, as my president has told them. They can either accept safe passage and we will show them the door or they will die in Ukraine. And I have my victory dance ready and every day I can’t wait to perform it. I am looking forwards to victory day, that’s why I’m not sad.

“Just because you are one of the biggest countries the world, it doesn’t mean you are the strongest.

“In the meantime, I am in constant contact with family and friends in the Ukraine. I hardly sleep. I have my mobile on all night and I receive messages all the time, especially from my little sister. After the initial invasion, they had a ten-day ceasefire in the city, but the bombings have begun again. Just the other night, Anastasia messaged me five times - every time a bomb fell near their apartment block. And the Russians have blocked nearly all communication systems, so most of the time there is no wifi so they have to go to a local bank which allows locals to send short text messages via Telegram.

“Most mornings they tell me they have food but not much. It makes it hard for me to enjoy my breakfast.

“Also, many parts of the city have no running water or electricity. It’s normally around -2 to -4 at this time of year but some nights its drops to -20 and people are having to revert to ancient means to rub sticks together to make fires to heat stones to cook whatever food they have and keep warm. One of the saddest stories was of a one-year-old baby who died of dehydration because there was no water. And the Russians believe that Putin is not targeting civilians. He’s killed over 120 children.

“All this talk about the Ukraine and Russia being like brother countries is total nonsense. Just read the history books.

“The Russians were nomads. Centuries ago they roamed Eastern Europe raping and pillaging, the Ukrainians are settlers. We have nothing in common. Our history, culture and way of thinking is totally different. We found our plots of land and started making a living from farming and gradually expanding. You can go to many farms and the people working them today will be able to trace their generations back centuries. That family will have been working that farm for hundreds of years without having bothered anyone. This is why Ukrainians want to fight, they want to protect what they’ve worked for and built through the generations. And this is why we will win and show the Russians the door,” Kristina said.

“But sometimes war is good because this is when the masks come off and people and countries show their true colours.

“Obviously I am no longer in touch with Russian friends I had, but there have been others who have reacted jealously to the way in which the world has rushed to help Ukraine. Some of my friends come from countries which have been locked in war for years. They have pointed this out to me and the fact that no one came to their aid, but that after just over 20 days, nearly the entire planet had stepped up to help Ukraine. The trouble is I had no idea that these people came from war zone. If I did I would have offered them my support, given them hugs, asked then how they were feeling. I would not have reproached them in any way.

“Like I said, I can’t thank the local people enough but the problem is we’re going to need donations, especially non-perishable food and medicines for the young and the elderly for months to come, long after the war ends because it will take time for us to recover.

“We have sent a fleet of vans through Poland carrying aid and a German company gave us a 24-ton trailer. It has just completed its fourth delivery and it will leave again this week, so please don’t stop, not even when the war ends,” she said.

PS. Melitopol is near the Sea of Azov and Ukraine’s defence ministry said late on Friday it had lost access to the Sea of Azov “temporarily” as invading Russian forces were tightening their grip around the sea’s major port of Mariupol.