After a weekend when actor Hank Azaria announced he would no longer voice Simpsons character Apu, the Indian shopkeeper, because it was deemed racist – so what happens now to Groundskeeper Willie, a stereotypical Scotsman voiced by an American? – Real Mallorca, in the best game of the season, walloped Champions League side Valencia 4-1, which keeps them in touch of staying in top flight Spanish football.

The team were well aware of what was at stake and came out of the traps flying. They never allowed our (on paper) superior visitors any leeway and took the lead after six minutes with a goal that was simplicity personified. A pinpoint free kick from old “Silver Fox” Salva Sevilla found Antonio Raillo’s head and his effort saw Mallorca take an early lead 1-0. That was the central defender’s first goal of the season. Fifteen minutes later Mallorca doubled their lead. Budimir was involved in the start and the finish and the ball went in off his knee, 2-0. Mallorca fans in the Sol Alta and Baja quickly forgot about being drenched in the rain and were in raptures. Five minutes from the end of the first half, Mallorca went into cruise control with a proper world class goal and it was a Bobby Dazzler. Cucho Hernandez (who was impressive in his home debut) was the instigator, he passed to Salva Sevilla, his first touch found Lago Junior, who found Budimir. He turned his marker, took one touch, then hit a stunning left foot volley past the outstretched hand of Domenech. Suddenly the travelling Valencia supporters weren’t singing any more as Mallorca went in at half time comfortably ahead, 3-0.

What a buzz there was at half time (especially at the pizza counter at which, incidentally, you can now order your topping online before the game) as fans were racking their brains trying to think of the last time Mallorca were 3-0 up at home against one of the La Liga giants. It was in fact the first time since 2009 that Mallorca finished the opening 45 minutes at home 3-0 up. Mallorca didn’t let up after the break and came close on several occasions against a Valencia defence who struggled to contain wave after wave of attacks. The Palma side kept up the pressure and instead of back-tracking and holding out for their lead, they went on the offensive and it paid off near the end when Dani Rodriguez’s shot from distance put the result out of sight, 4-0. The work rate from him was fantastic, he is now the wrong side of 30, had he been a few years younger the Galician would surely be playing for one of the bigger clubs.

Valencia by this time looked demoralised and lost their captain and midfield inspiration Dani Parejo after a clumsy tackle, although the second yellow was harsh. With 64 minutes on the clock, Vicente Moreno brought on new loan signing Pozo and his introduction was the news of the second half. In the 72nd minute he was through on goal in a one on one situation with ’keeper Domenech who somehow pulled off a spectacular save. Mallorca then got sloppy at the back, allowing Ferran to score a simple goal, spoiling our clean sheet stats. Final score 4-1. 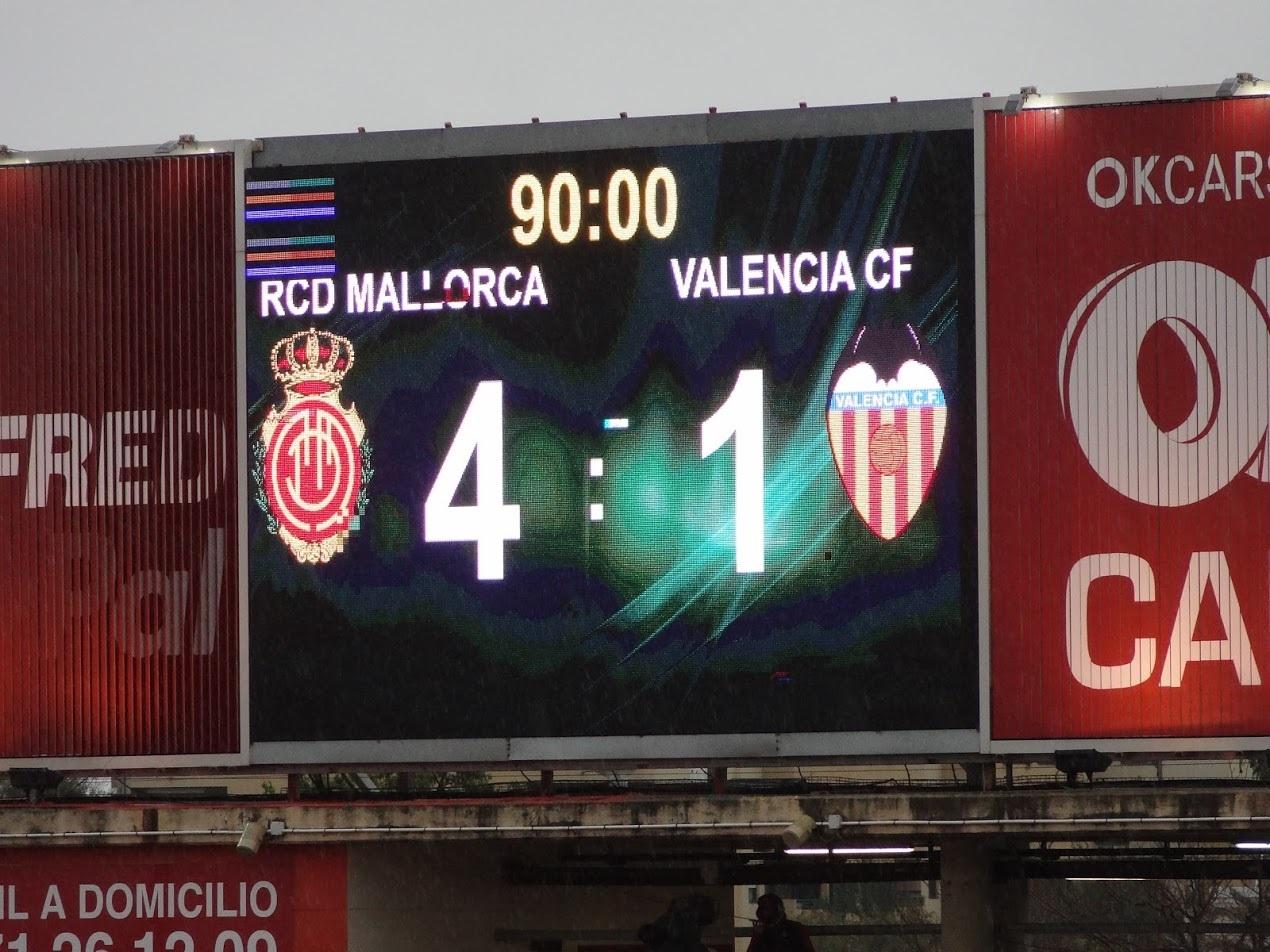 SUMMING UP: This was a crucial win in our relegation dogfight. There were huge wins down in the basement for Espanyol, Alaves and Eibar, with Celta Vigo sharing a 1-1 draw with At. Bilbao. Ante Budimir up front benefited big time by having Cucho Hernandez next to him. When the Colombian was substituted near the end, he was given a standing ovation. The return of Baba also made a big difference. He’s developing into a quality midfielder as he continues to cover the entire centre of the pitch. The Ghanaian international’s play allows Salva Sevilla more space and he was involved in two of the goals.

Sunday’s win was a huge morale booster for Real Mallorca who’ve been lacking self esteem of late. Moreno has told his team to never give up and on Sunday they gave their best performance of the season. 9,856 fans braved Storm Gloria and there was a “glorioso” outcome as Mallorca fans trudged out through the puddles!! We finish the weekend out of the bottom three and now head for San Sebastian and Real Sociedad in their renamed Reale Arena on Sunday at 18:30.

With a cup match tomorrow at 19:00 away at Zaragoza, Moreno kept Kubo on the bench until the 80th minute. Before he’d even touched the ball he was yellow carded for a trip. His introduction pleased many Japanese fans who turned up to see their “Messi” play. At half time there was a penalty shoot out filmed by the crew from the next series of “Mallorca Files.” They couldn’t have picked a worst day weather-wise.

PS Lots of fans on Sunday looked like they weren’t proficient with how to operate an umbrella – people were being poked all over the place.

You can watch the match highlights at www.rcdmallorca.es.