Real Mallorca drew 2-2 away at Valencia on Saturday lunchtime after being 2-0 up going into seven minutes of added-on time. Two late, late goals from the home side saw Real Mallorca, for the third game running, show their naivety and fail to get through the closing minutes of a match without conceding goals. Just how this game finished a 2-2 draw is, in itself, unbelievable when Valencia didn’t register a shot on target until extra time.

On Saturday, like our 1-0 defeat last weekend at Real Sociedad, Mallorca went head to head with their more fancied opponents and held their own for long periods. Coach Luis Garcia Plaza made only one change from last Saturday’s initial XI, bringing in Antonio Sanchez for his first start this season in place of Amath, giving the Mallorcan a vote of confidence only having played 24 minutes of the campaign after a shoulder operation.

The first half was all about South Korean youngster Kang-In Lee who on his return to the club where he played since the age of 10, showed Valencia what they had given away on a freebie. In the 32nd minute he produced a sublime piece of skill to engineer our opener, teeing up Angel Rodriguez to put Mallorca ahead 1-0. Six minutes later Dani Rodriguez’s angled strike took a deflection off Valencia’s French defender Diakhaby which passed the VAR test, 0-2.

At half time Mallorca fans couldn’t believe it ! Into the second half and the Palma side were dealt a huge blow after 11 minutes. Kang-In Lee showed the Jekyll and Hyde side to his game. With Mallorca looking to be on cruise control, he went into a challenge studs-up and in the modern game that’s a bookable offence, as a shocking referee (more on him later) Del Cerro Grande showed Kang a second yellow card and he was off.

How on earth a player on a yellow card could put in such a dangerous tackle and expect to stay on the pitch beggared belief. LGP should have taken the youngster off at half time as he’s a vital player for us and his rush of blood to the head will see him miss Wednesday night’s game in Palma against Sevilla, “Caramba !” 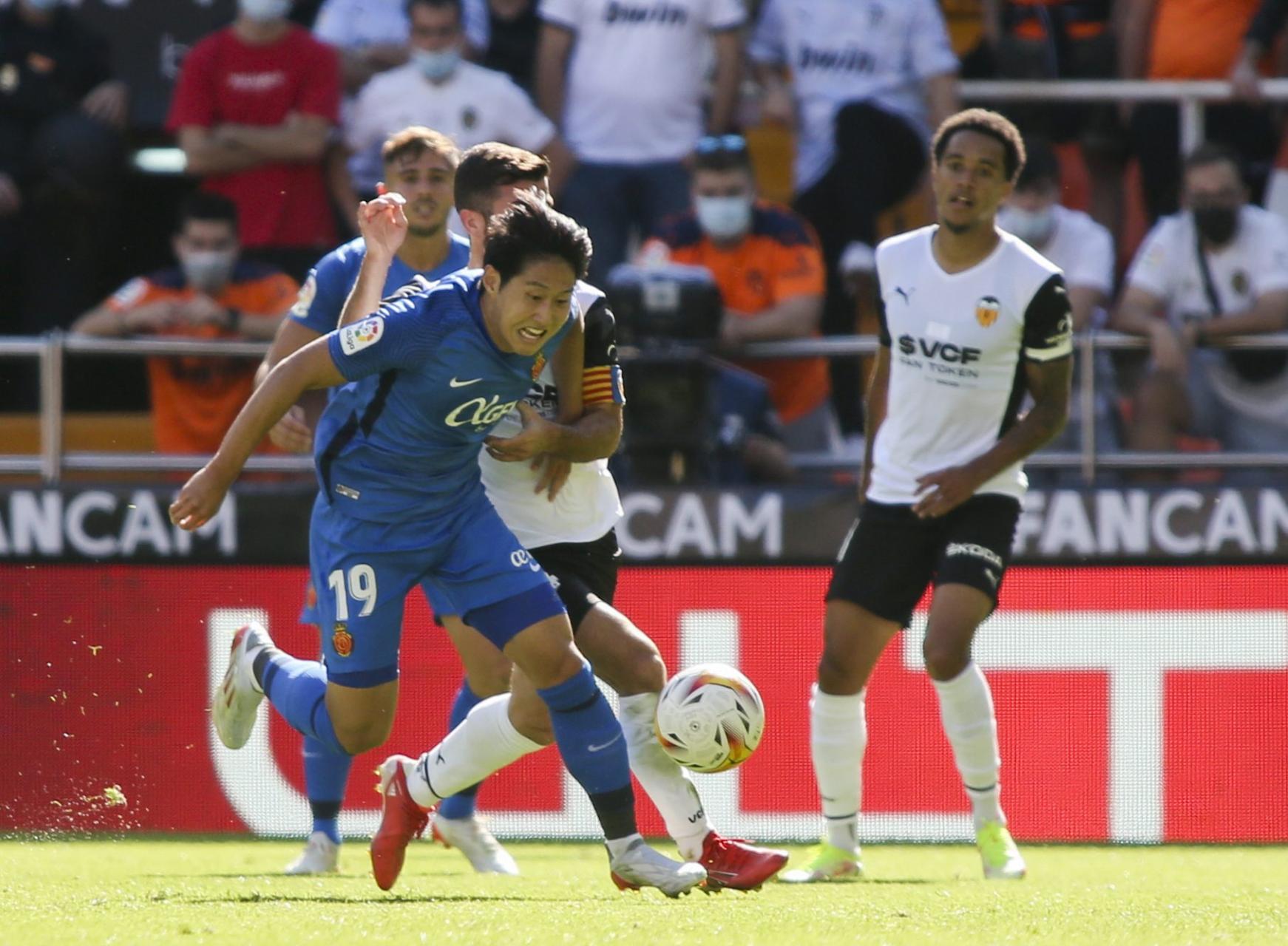 With his dismissal the South Korean became the protagonist of the afternoon – a spectacular display on his return to the Mestalla in the first half and ending with a stupid sending off that cost Mallorca the chance of taking all three points in the end.

By now Valencia’s coach Bordalas had introduced a mini-revolution by bringing on three replacements at once. With only 10 players and almost all of the second half ahead, Mallorca had only one choice – 10 men behind the ball, and the system worked well as the home fans got more and more frustrated.

Somehow our defence looked to have done the job until Valencia pulled one back with a stunning shot from distance by Portuguese international Guedes, the ball coming off Russo’s head on the way in, 2-1. As the clock ticked down the added-on time board went up – seven minutes, seven bloody minutes, POR FAVOR ! – surely that was wrong ?!

Mallorca were defending like demons as Valencia charged forward – could we hold out ? Everything seemed done until the 97th minute, after the umpteenth cross the ball fell to Gaya who with an overhead kick equalised, 2-2. The 29,139 Mestalla crowd went ballistic and we were stunned. Mallorca had lost four points to goals scored in the last minutes in a week – unbelievable.

SUMMING UP : After a feeling of defeat (despite the result), Mallorca coach LGP said he was satisfied with the performance, disappointed with the result and “outraged” by refereeing decisions, saying “Mallorca were treated like an inferior team.”

Our young side must learn how to run down the clock at the end of a game in La Liga. Substitute striker Fer Niño tried to go it alone at the very end and instead of taking the ball down to the corner flag to waste precious seconds, he tried to be clever and go it alone. He lost the ball in the middle of the pitch, Valencia took advantage, went down the other end – and scored the equaliser.

FIFA referee Del Cerro Grande’s time-keeping came into question at the end. In the first half he added only two minutes which later became five because of the VAR check on our second goal.

Valencia made three changes at half time and VAR wasn’t used at all in the second period, plus there were minimal stoppages. The added-on period went from 90 to almost 99 (the referee blew for time on 98 minutes). It used to be the case (before VAR) that an added three or even five minutes was normal at the end, now it’s not even close to seven !

Too many times Grande showed his allegiances to the home side with some strange decisions but we can have no excuses – we have to learn how to hang on to a lead until the final whistle blows.

Wednesday night Sevilla play in the Son Moix, kick off 19:00. We’ll be without Kang-In Lee (a big loss) and Battaglia who was sent off in the tunnel after the game. Sevilla scored five at the weekend, so we’ll have our work cut out to get a result.