In a weather-affected weekend of sport when the Calcutta Cup was played in a wind tunnel – the porridge munchers’ (Scotland!) captain Stuart Hogg gave a post match interview looking like he was on the verge of death by hyperthermia! – Real Mallorca’s chances of staying in La Liga after a six-year absence hang by a thread after another disappointing away showing, losing 1-0 to bottom side Espanyol. They hadn’t won at home all season. We’re now joint bottom with them and Leganes. It’s the most difficult place to try and get out of but the signs have been coming for several weeks. I watch a lot of Spanish football on TV and this defeat with its consequences has shown just how lacking in quality our squad of players is.

The build up play on Sunday was far too slow and keep-ball possession was poor. However, we did dominate a frenzied first half and looked the team most likely to score. We forced seven corners in the first 35 minutes and not one troubled the shaky home defence. All our attacks came to nothing when we reached the penalty area. At this level half chances have to be put away, not ballooned into row Z, and our emphasis on trying to walk the ball into the net proved our undoing once again. What seemed like a stonewall penalty award was overturned after VAR showed (for the second time in two games) that the ball had crossed the byline by millimetres. In the 51st minute came Espanyol’s goal and it set the 35,000 crowd in the impressive Cornella stadium alight. 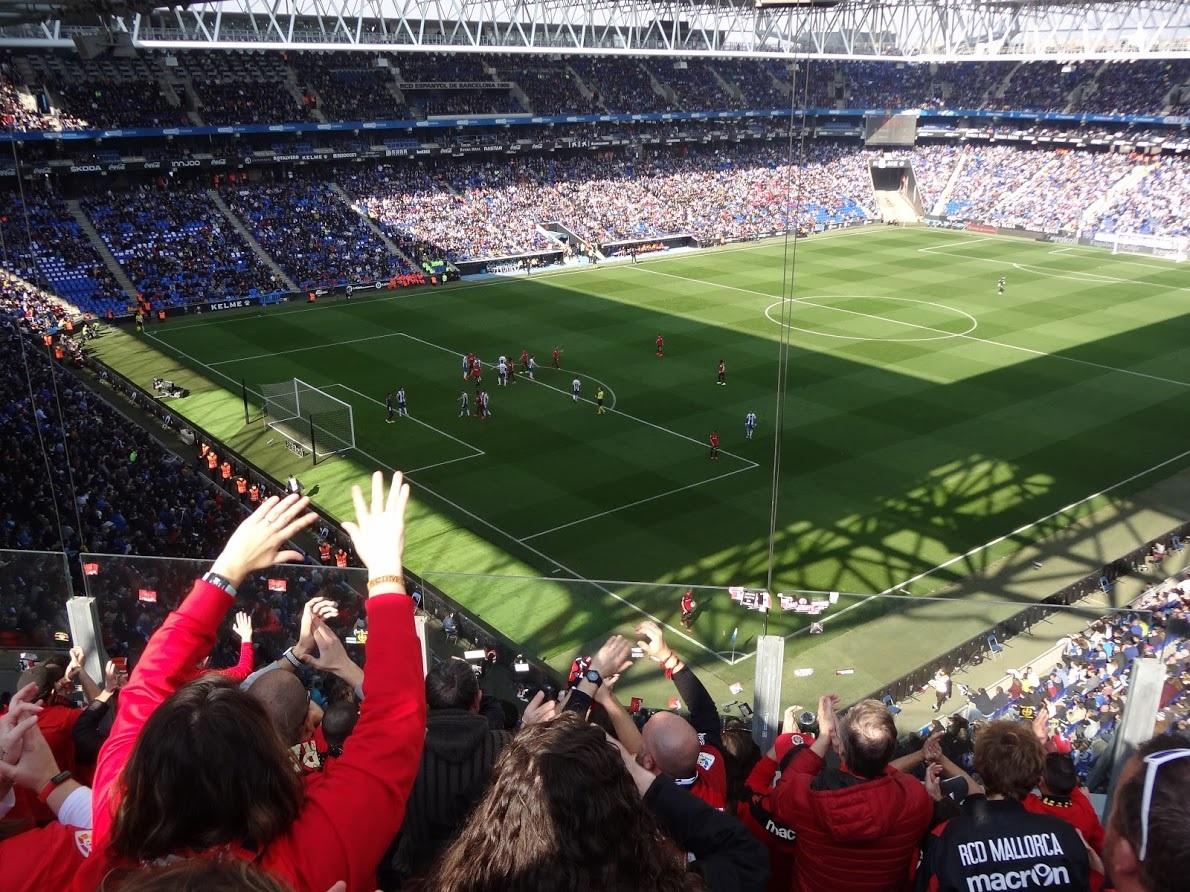 A fan's view of the impressive Cornella stadium.

A missed tackle by Pozo down the right allowed Arta-born Espanyol midfielder Sergi Darder to get involved. His cross found the head of Raul de Tomas and the 20 million euro January transfer window signing from Benfica planted his header firmly past an outstretched Manolo Reina, 1-0. De Tomas has now scored five goals in five games and looks to be The Budgies’ King Midas, worth every euro of his high price tag.

After the goal, the Mallorca players heads visibly went down and we looked like a team who were struggling in La Liga. Unlike other clubs we don’t have an impact player who can come off the bench and make the difference. Kubo and Abdon Prats appeared near the end, did plenty of running but precious little else.

SUMMING UP: I was at the game and most of the Mallorca fans (around 300) came from Barcelona university. These kids were doing a great job getting behind the team until Espanyol scored, then the appreciation turned to reality. A guy next to me was giving Lago Junior a hard time. He had a point as Lago’s form has dipped dramatically over the past few weeks and he doesn’t look 100% fit. I promised friends that I wouldn’t be over-critical of the team’s performance but they are so frustrating to watch, it’s difficult not to make any adverse comments. The weekend for us went from bad to very bad when Celta Vigo provided the shock of week 23, beating Sevilla 2-1 with a 95th minute winner, shoving us well and truly into a relegation dogfight. Coach Moreno has now got the unenviable job of motivating his team for the tricky game against Alaves on Saturday at 13:00 hours. There are still 15 games left to play, a long way to go, but Mallorca have to pull back a 4 point gap to 16th placed Eibar. Far from impossible but very hard for a team who haven’t kept a clean sheet since October and have only taken one point away from Palma all season.

Security at the ground was way over the top, and we were subjected to rigorous body searches. None of us had any hand luggage with the exception of the ladies who had their handbags well delved into by a po-faced jobsworth with a ring pull through his nostrils. One of my friends had her lipstick confiscated (unbelievable) and also something she described as her “anxiety mouth spray,” a very necessary item at the moment while watching Real Mallorca struggle !

At the start of the season, general manager Maheta Molango described our participation in La Liga as being “like midgets in a land of giants” and he has been proved correct. Our position hasn’t been helped by the league-imposed minimal budget/salary of 29 million euros, the lowest in La Liga. It’s going to be tough to get out of this situation. Visca Mallorca!

PS Celta play away at Real Madrid next Sunday, which could mean, if all goes well and other teams around about us lose, and presuming we beat Alaves, we could go back up again to 17th.

Filip | over 2 years ago

Kubo seems to be the best player, but he spends most of his time on the bench :(