Fan's view: Real Mallorca are one point from a La Liga return

After a weekend when a charity album in aid of the Indian Covid outbreak has been released – some of the tracks are : “Tears on my Pilau,” Kylie Minogue; “Poppadum Preach,” Madonna; “Can’t Curry Love,” Phil Collins and “Korma Chamelion,” Culture Club – Real Mallorca put two feet back in La Liga Santander when, in a disappointing but very emotional game (in front of 4,086 privileged fans including me !), they beat Alcorcon 2-0 with both goals involving VAR participation on Sunday night.

An Abdon Prats 43rd minute penalty, and a delectable chipped shot from “old warhorse” Salva Sevilla, sealed all three points and we could be promoted win or draw 2,480 km AWAY AT TENERIFE WEDNESDAY NIGHT, kick off 21:30.

In the first half, the game started at a slow pace. Mallorca wanted to avoid going behind against a slick passing Alcorcon who weren’t making life easy for the home side.

Surprisingly coach Luis Garcia Plaza had left Galarreta (returning from injury) on the bench, although he did come on near the end; before his introduction we missed his dynamism.

With half time rapidly approaching, Mallorca were awarded a penalty. A Dani Rodriguez shot cannoned off Aguilera’s hand in a crowded penalty area. The referee wasn’t 100% sure about the incident despite appeals from both players and fans alike. VAR came up trumps (Isn’t it a wonderful addition to the beautiful game ?!), awarding the spot kick which Abdon (celebrating his new contract) netted easily, 1-0. A dull first half finished with Mallorca in the driving seat.

After the break the Salva Sevilla show took top billing and settled the game. His class in midfield was a joy to behold and in the 54th came another spectacular goal from the 37-year-old maestro. A good build up involving Lago Junior and Abdon saw Salva (who looked suspiciously off-side from my vantage point) chip the Alcorcon ’keeper to score. Again VAR was involved and again the verdict was in our favour, 2-0.

The rest of the second half was damage limitation for Real Mallorca and in the end they ran out worthy winners. 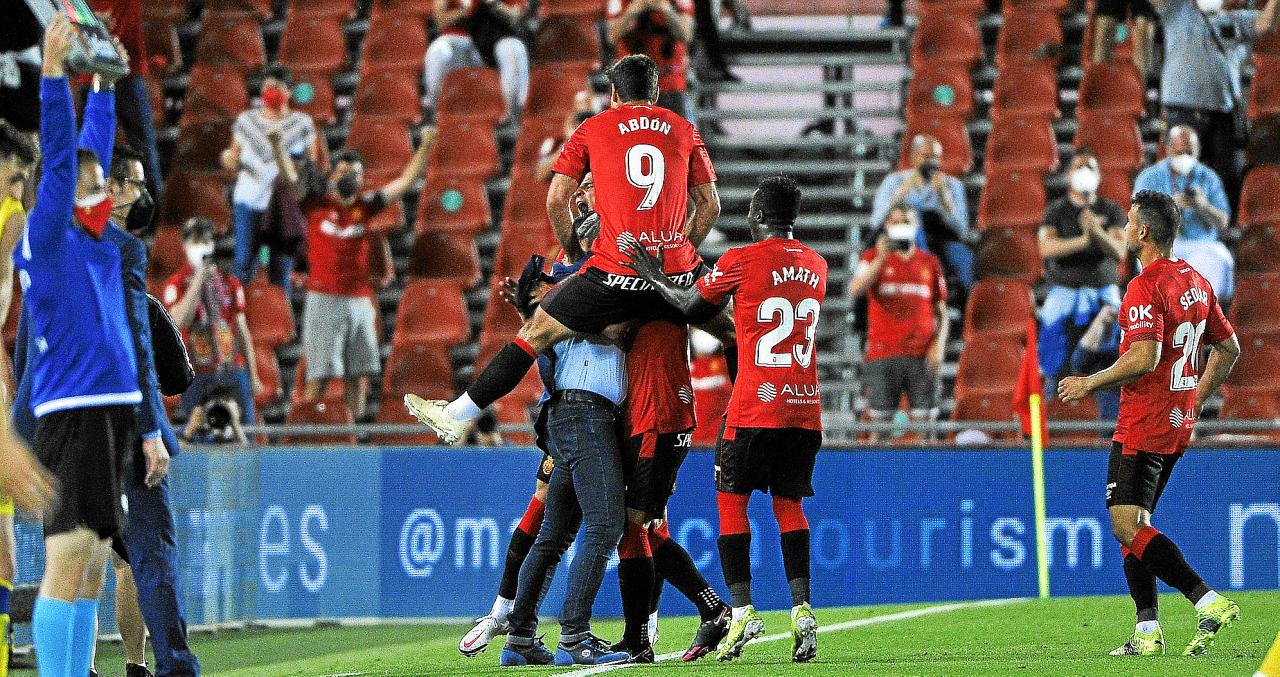 SUMMING UP : I joined the queue lining up to be checked for entry into the Son Moix 45 minutes before kick-off. Everything went like clockwork and we were through the protocol in 15 minutes – we even got a free bottle of water. I’ve never seen so many hi-viz jackets and bibs in the ground before. Stewards were even issuing FPP2 masks to those whose face coverings weren’t up to the required standard.

Once the game got started, the feeling of being back inside Son Moix watching a live game defies description. The crowd were magnificent and didn’t care that the game wasn’t a brilliant spectacle. The team won and that’s all that matters. The 4,086 fans present roared their team on in spectacular fashion.

After the final whistle blew, players and coaching staff danced jigs of delight in the centre circle as the crowd sang out “A Primera, a Primera.” We were all made aware of the feat that the team are about to achieve come wednesday night when we could be back in La Liga Santander after a fantastic season.

AND FINALLY, a man wakes up in hospital after a terrible car accident to find he’s lost his wedding tackle.

The doctor tells him he’s in the best hospital in the country for these kind of transplants. He tells the man “We have an English one for £2,000, a Scottish one for £3,000 and a West Indian one for £5,000. It will take five minutes, no problem.”

The man tells the doctor “I always discuss financial matters with my wife. She in the waiting room, I’ll get her.”

Five minutes later the doctor comes back and asks “Have you made a decision ?”