Real Mallorca, despite losing 0-3 on Monday night, and putting on a magnificent exercise in resistance against the mighty Real Madrid, came unstuck in the 54th minute when a Baba mistake gifted the visitors their opening goal. They picked up all three points and go 10 points clear at the top of La Liga.

The game got off to a blistering start with Benzema and Mendy going close but Mallorca weren’t to be outdone and Vedat Muriqi couldn’t sort his feet out as he diverted Brian Olivan’s pinpoint cross just wide. Mallorca were growing in confidence and in the 35th minute a brilliant move came to an end when Maffeo’s final attempt was scrambled clear. We played a very good first half taking no prisoners against a Madrid side who when tackled strongly had more rolls than Greggs the bakers !

The first half belonged to our right back Pablo Maffeo who had the unenviable task of marking Vinicius Jnr who was a permanent danger, and was electric, fast and had more dives than Tom Daly. Maffeo will miss next Sunday’s away game at Espanyol (2 pm) after receiving a fifth yellow card, and was lucky to stay on the pitch after a studs up challenge on a Madrid player.

The Mallorca fans were more than happy to see us go in at the break level at 0-0 and we started the second half as we’d finished the first. That is until the 54th minute when disaster struck. With the game seemingly under control, Idrissu Baba incomprehensibly was caught in possession on the edge of the centre circle by Fede Valverde who was snapping at the Ghanaian international’s heels. Valverde stole the ball with a hint of a foul on Baba, set up Benzema who, with a shake and a shimmy, passed to Vinicius who showed no mercy scoring past Sergio Rico, 0-1. There was a deadly hush from the 17,191 crowd.

Then in the 76th minute we gave away a soft penalty when Olivan shoved Vinicius over in the area and Benzema made no mistake to double Real Madrid’s tally and literally seal the victory. In the 81st minute substitute Marcelo put over a dream cross and Benzema rose in the late night Palma sky to nod in the third, 0-3.

Incredibly Mallorca never gave up and missed at least three chances to equalise in the final throes of the game leaving Madrid to lick their wounds in a game where the three goal margin flattered to deceive. Real Madrid will play El Clasico (part 2) against Barcelona next Sunday night minus several of their stars who limped back to Madrid after this bruising encounter that had the crowd on the edge of their seats. 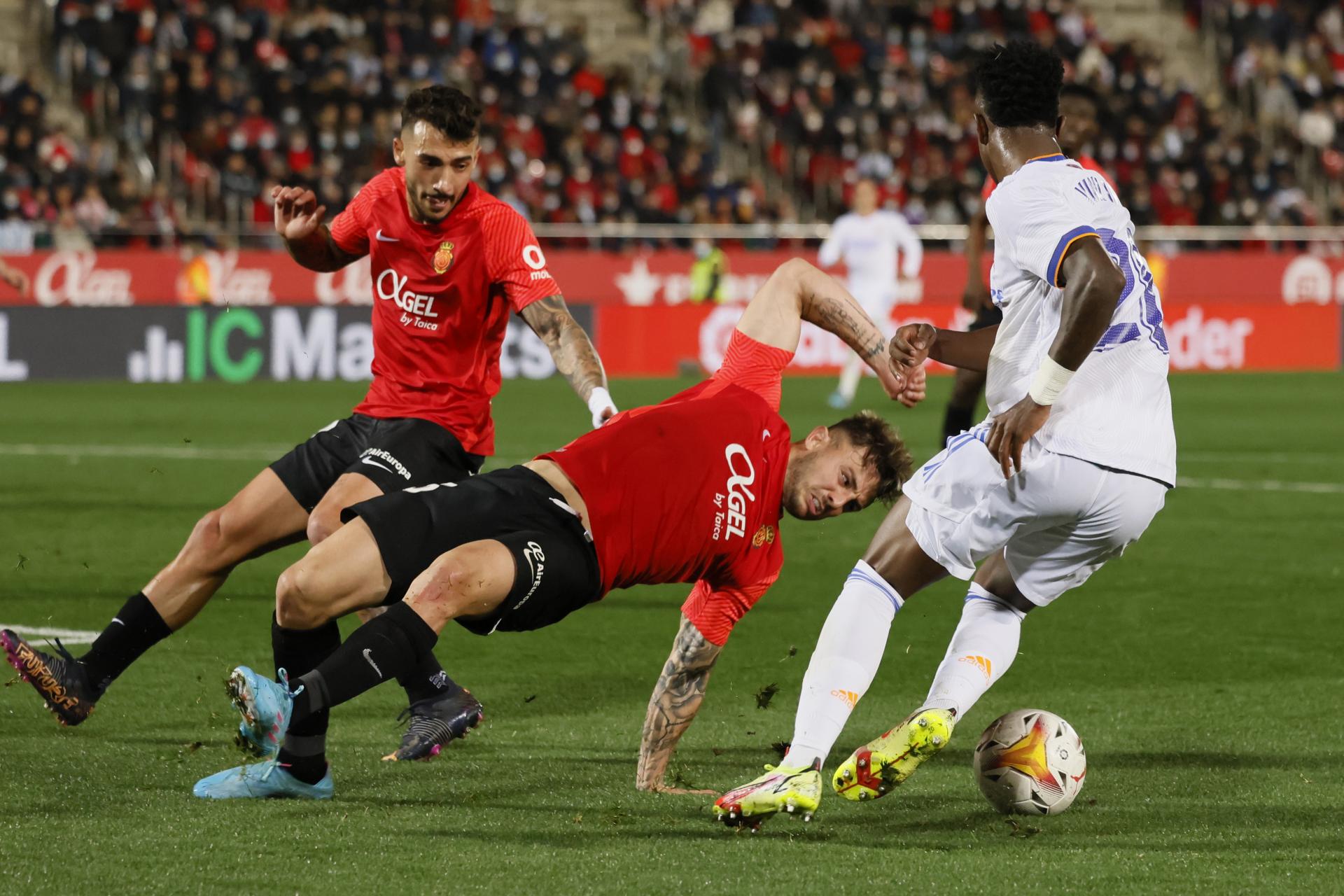 The crowd loved every minute of this game until the final 20 minutes. We had the perfect approach and played with an intensity that hadn’t been seen in Son Moix for a long time. Our coach Luis Garcia Plaza had done his homework and aware of Real Madrid’s technical, physical and tactical superiority told his players to fight tooth and nail for every ball. He played two upfront with Muriqi causing lots of problems for the Madrid defence.

However, despite our gallant efforts, we missed a shed full of chances and against a team with the quality of Real Madrid even a half opportunity needs to be put away. After Madrid took the lead our heads visibly dropped.

Raillo gave a solid performance at the heart of the defence and Espanyol-bound Brian Olivan flew up and down the left flank all night. Dani Rodriguez recovered his lost form and was omnipresent from box to box and Maffeo got into a fight with any white shirt he came across. Madrid won’t have a tougher away game this season.

As far as Mallorca were concerned, we must forget this defeat as soon as possible. A full Luis Sitjar stand stayed until the end and clapped the team as they were leaving the pitch. We must stay positive after showing we can mix it with the big boys but we must tighten up at the back and put goal attempts into the net. We’ve now conceded 48 and failed to score again although it wasn’t for the want of trying.

There are now 10 games left to play and Mallorca sit just two points outside the drop zone. Home games against relegation rivals Alaves, Granada and Rayo Vallecano are coming up in the next few weeks and these are fixtures we just have to win if we want to avoid another relegation scenario. My man of the match : Pablo Maffeo, who made sure the dangerous Vinicius knew he was in a game. Maffeo also hit the post in the second half. Mallorca now have two away games, Espanyol next Sunday at 2 pm, then Getafe on Saturday, April 2, again at 2 pm. We must try to get something from these games.

AND FINALLY, brace yourselves guys, here are five deadly terms used by women : (1) FINE – this is the word a woman uses to end an argument when she knows she is right and you need to shut up; (2) NOTHING – means “something” and you need to be worried; (3) GO AHEAD – this is a dare, not permission, don’t do it; (4) WHATEVER – a woman’s way of saying “screw you” and (5) IT’S OK – she is thinking long and hard on how and when you will pay for your mistake.