"Tennis is all about momentum," Nadal said.

Rafa Nadal dug deep to beat mercurial wildcard Nick Kyrgios 7-6(0) 5-7 6-4 in a blockbuster quarter-final match that lived up to the hype at Indian Wells on Thursday.
Despite not playing his best, the Spaniard managed to deliver in the match's biggest moments and maintain his composure as his opponent threw his racket and jawed with the chair umpire, fans and himself.

Nadal saved break points early in the third set and hung on to see off the big-serving Australian and extend his unbeaten record this year to 19 matches.
"I think I played a good third set," Nadal said in an on-court interview.

"I was returning better, I was solid with my serve. Nick is one of these players that you're going to have problems with when he's motivated, so I'm happy for the victory."

Kyrgios came out hot, breaking Nadal for an early 2-1 advantage in the first and pumping his fist after firing a blistering forehand winner down the line for a 5-3 lead.

But Nadal struck back, handing Kyrgios his first break of serve of the tournament to level at 5-5, and Kyrgios threw his racket when Nadal's winner clipped the tape to begin the next game.

Unforced errors put Kyrgios in a hole in the first set tie-breaker and Nadal won it after his fiery opponent was given a point penalty for "audible obscenity" after he swore at an unruly fan. 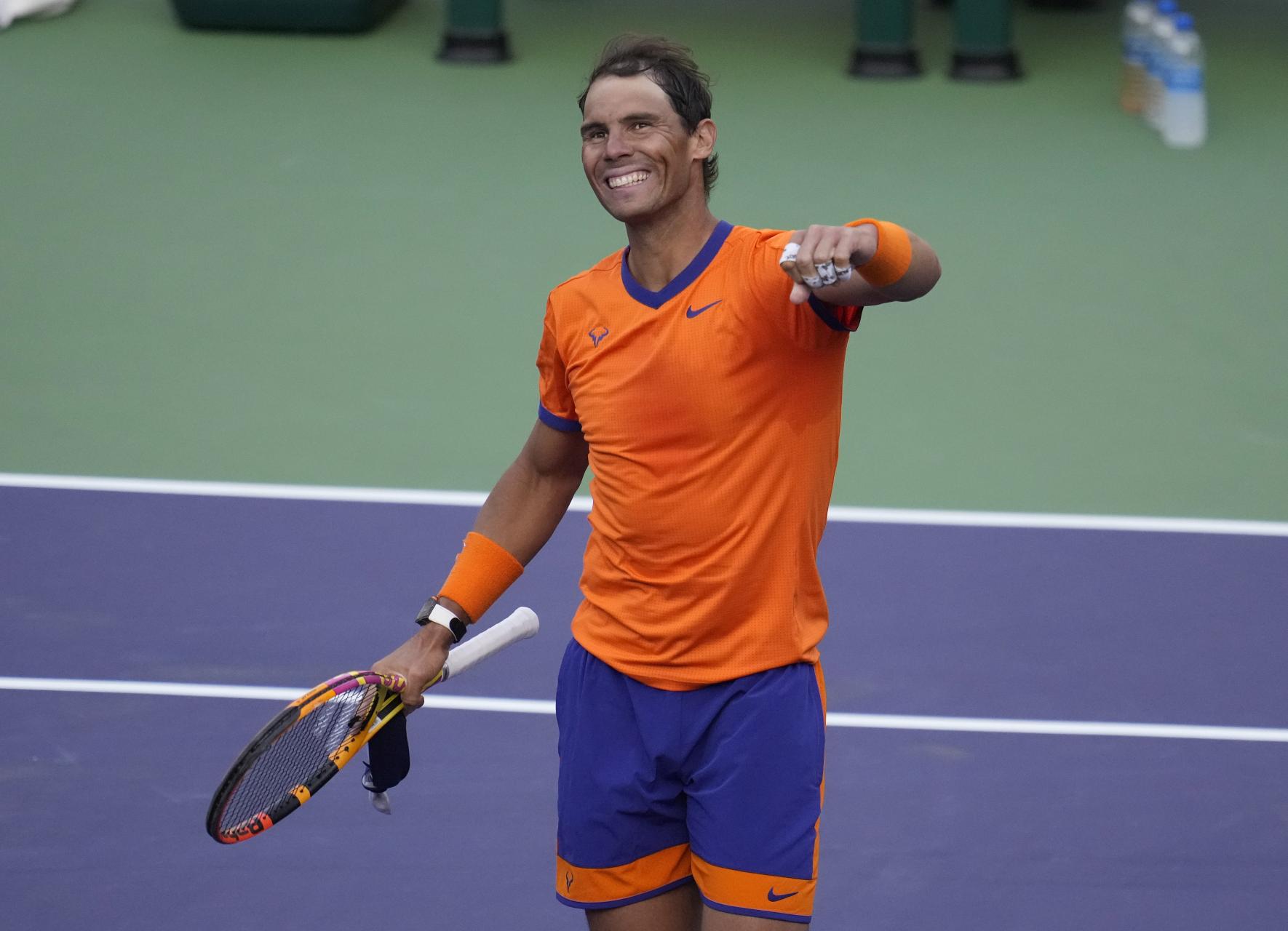 Kyrgios regained his composure in the second, hitting a slicing 45 mile per hour underhand ace for a 4-3 lead, breaking Nadal in the final game with a spectacular leaping backhand volley winner that sent the crowd into a frenzy.

Nadal, who committed seven double faults and won just 29% of his second serves, saved break points early in the third set and broke Kyrgios for a second time to take a 4-3 lead. He sealed the win with an emphatic overhead smash on match point.

After shaking hands at the net, Kyrgios threw his racket again onto the court and this time it nearly bounced into the stands.

"Tennis is all about momentum," Nadal said.

"I knew that after finishing the second with a couple of mistakes, I knew the beginning of the third would be critical for me. I saved those first couple of games and the match came back to normal.

"And then I played well."

If Nadal can win his fourth title in the California desert, the 21-time Grand Slam champion will move into a tie with Novak Djokovic for the most Masters 1000 titles with 37.

He will face either teenage sensation Carlos Alcaraz of Spain or British defending champion Cameron Norrie on Saturday for a spot in the final.