In the eye of the storm in Mallorca

Alert level is raised for tomorrow

The risk of heavy rains in Mallorca is increasing and the State Meteorological Agency (Aemet) has raised the alert level.

Specifically, it has been upgraded to orange and will affect the entire island from 00:00 hours this morning until 20:00 hours tomorrow (18 August). The extended alert was announced by the deputy spokesman for the Aemet in the Balearic Islands, Miquel Gili. He said that 40 litres of water per square metre could be recorded in just one hour. 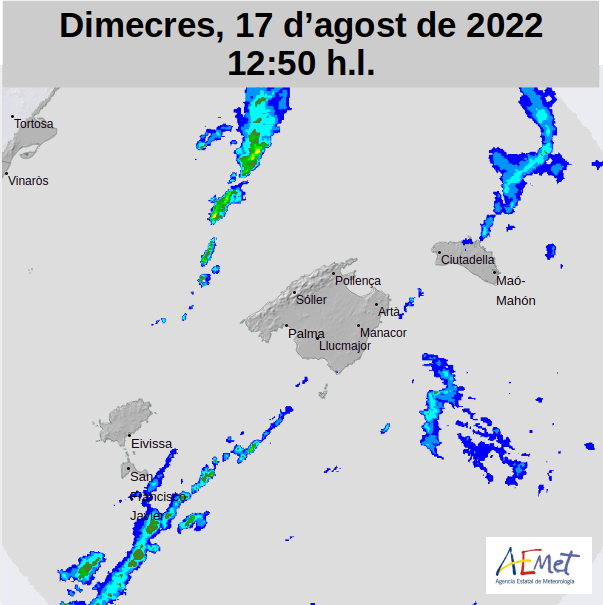 It is most likely that the rain will fall in the early hours of the morning (Thursday) , there will be a pause and then it will return in the afternoon. However, the orange warning will remain in effect at all times. In addition, there is a possibility of hail along wiith wind gusts of 50-60 kilometres per hour are expected during the storm. Temperatures will continue to fall and maximum temperatures will be around 30 degrees Centigrade, the usual for this time of year, although in some places they could be even lower. This is about 10º less than last Sunday, when it was close to 40º, and even higher in some places.

Looking ahead to Friday, the weather in Mallorca tends to improve, although some showers may still fall in the afternoon, according to Gili. Bad seas are also expected in the north, with waves that will not reach a height of two metres. Stable weather will be the main feature of the weekend, when rain is no longer expected. Temperatures will rise and maximum temperatures will reach 32º-33º.

Parts of Mallorca now on amber for torrential rain and thunderstorms

I hope these rains do not cause another tragedy on the Island.