Kitchens and Cooks with passion

Mediterranean cuisine with a very well cared for aesthetic

Quadrat and Ocre are the gastronomic flagships of the exclusive hotels that the Soldevila Ferrer family owns in Palma and Santanyi. In both, the culinary know-how and expertise of Álvar Albaladejo, chef of the kitchens in this hotel group, also owners of the Hotel Majestic in Barcelona, shines through.

Albaladejo, who has worked in great restaurants where he has perfected and refined his cuisine (Gran Hotel La Florida in Barcelona, Jumeirah in Soller & Dubai), knew that he had to offer a well-cared-for gastronomy, based on local produce, respectful of tradition and, at the same time, innocuous in its presentation. The idea, both mine and the proprietors’, is that the cuisine in our restaurants should have a recognisable identity, in keeping with the personality of the buildings and the service offered. It’s no longer just about what you do, it’s about how you do it.... A dish has to be beautiful, of course, but above all, it has to be tasty’.

When Albaladejo took over the reins of this project, his priority was to bring a unique and identifiable personality to the gastronomy of his restaurants. Together with Carles Forteza - who had worked with him at Jumeirah, and later with Santi Taura - they made a radical change to the Asian cuisine that Quadrat had had in its early years, opting for an innovative cuisine that was one hundred percent Mediterranean and preferably Mallorcan.

Everything on the plate has a reason for being. Rarely have we allowed ourselves to put something on the plate that was not justified. Here the premises impose themselves on us. We try to be coherent with the personality and the contents of the building that houses us’.

A menu, from start to finish

The menu is a good reflection of this philosophy of good taste without excessive concessions. Sophisticated and creative, detailed and aesthetic, as can be seen in the starters, main courses and, surprisingly, in some of the desserts, where good pastry schooling learned by Álvar Albaladejo is evident.

Two restaurants and the same way of understanding gastronomy

The menu for this edition reflects the philosophy that permeates Quadrat’s cuisine, located in a cosy vaulted room where the stables used to be, complemented by a magnificent and peaceful terrace surrounded by greenery.

For starters, they have opted for Cabraboc vermouth with citrus, with an air of braided olives; toasted oil bread with smoked sardines and ramallet tomatoes; porcella croquettes with salad, which ‘the owners say they are even better’ - A jokes - ‘than those of Nando Jubany’ (chef at Majestic); pea ‘frito’ with cured egg yolk, and black cuttlefish bread rolls, served open with an aesthetic presentation.

Then comes a seasonal ‘bajocada’ sautéed on high heat, with tarragon béarnaise sauce and tap de corti in a low pressure siphon. 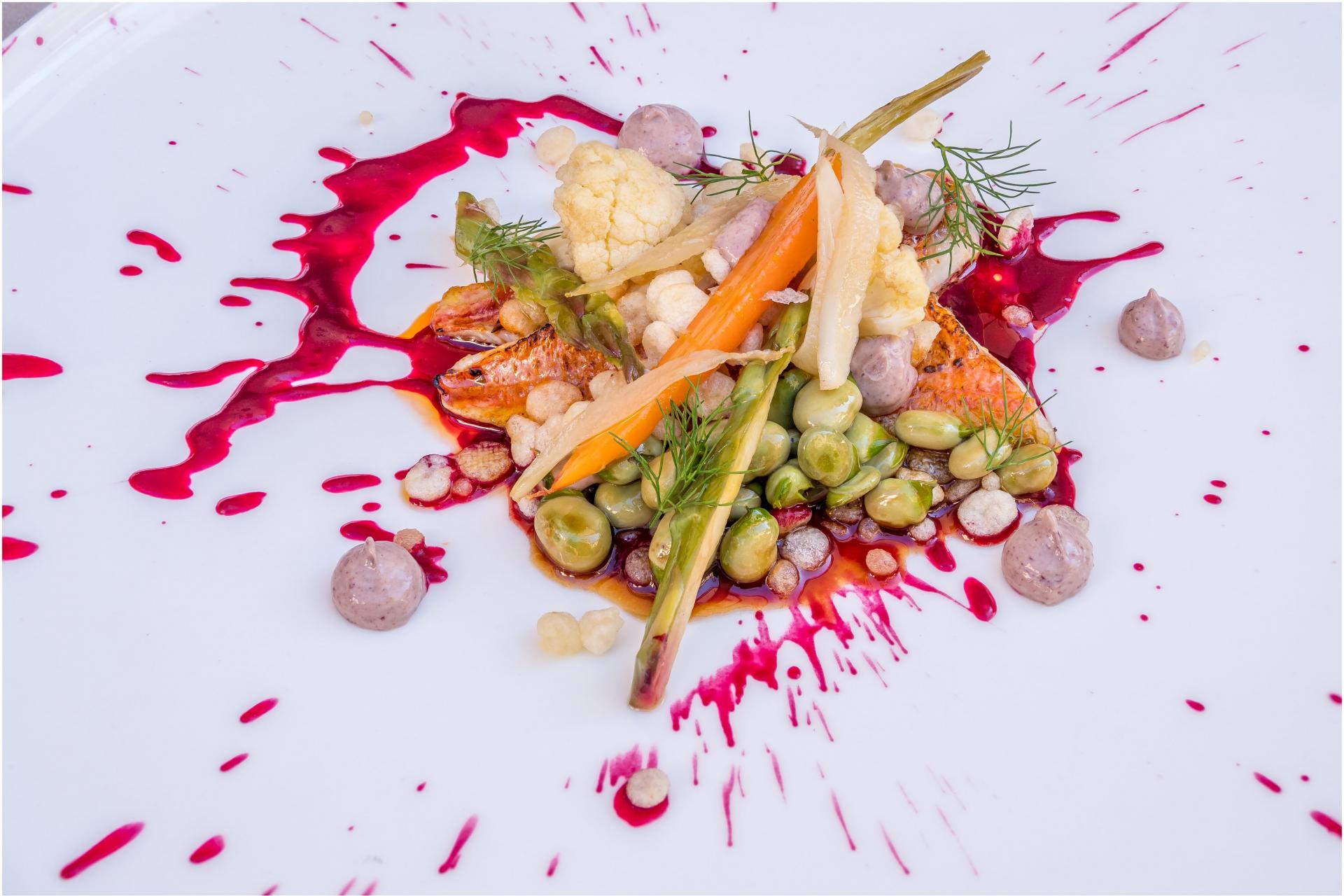 The first of the main courses is a red mullet marinated in Andalusian style with tap de corti, pickled vegetables, broad beans and black olive mayonnaise, with a light final touch of a blowtorch to make it crispy, and presented on a plate of intense colour provided by the beetroot mousse.

A special roasted pork loin with cabbage and a salad of artichokes, portobello mushrooms, pine nuts and mahones cheese vinaigrette is encased in a chard leaf with chive strips that enhances the symphony of flavours. ‘A dish reminiscent of one I had tasted years ago in Naples, which has been a great success with customers’.

And to finish, a delicate dessert of iced orange, brossat, caramelised pistachios with honey mousse, apricots from Porreres and Palo liqueur zabaglione, a very local innovation that Álvar had previously elaborated with Armagnac, and now he wanted to give it the intense and particular flavour that the Palo Mallorcan liqueur brings.