Can Juanito, in Avda Joan Miró just a bus stop from Plaza Gomila, is one of Palma’s finest Spanish restaurants, where you will get a great meal at the best possible prices. It’s a family-run place where what counts is the food on the plate and not the surroundings. I have always eaten extremely well there.

I was horrified last week when I realised I haven’t been to Can Juanito since the summer of 2010 when I went with the late Bob Norris after seeing a World Cup game on TV at a nearby bar. I was somewhat apprehensive and hoped my visit wouldn’t produce unwanted surprises.

I was lucky. It was immediately obvious that nothing much had changed, except that we were all 12 years older. Juanito’s son Isma was still flying between terrace tables and the bar. I had calculated that Juanito could easily have retired and he’d no longer be in the kitchen.

But as I approached the kitchen door I could see Juanito in his white jacket with a small black apron tied round his usual generous girth. He was wearing glasses and the beard and eyebrows were now white instead of black, giving him the air of a wise professor of philosophy.

It turned out he’s now 77 and has no intention of retiring. He gets up at 6.30 every morning and he’s in the kitchen by 8.30, having gone to the market to buy for that day’s eight or nine blackboard dishes.

One big change in his daily routine is that he no longer does the dinner shift. By the time the last lunchtime regulars leave (which can be as late as 6 pm) Juanito is sitting at home and isn’t on the go again until 6.30 next morning.

As Juanito no longer does the dinner shift his unforgettable paellas, which are among the best on the island, are now served only for lunch. The good news is that he still has individual paellas on the menu at €19. 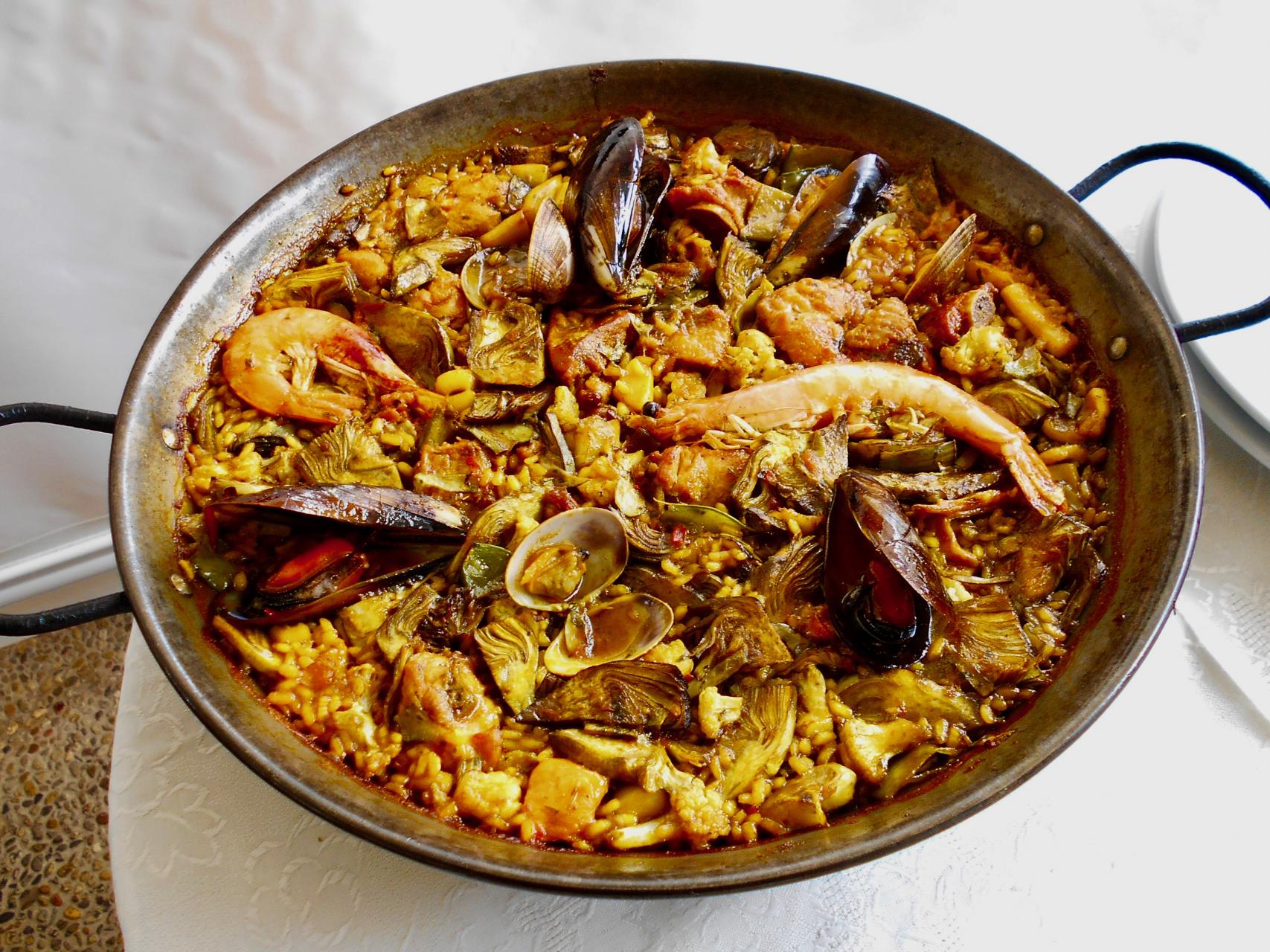 Can Juanito is now one of only two restaurants I know of that has individual paellas on offer, the other place being Celler Sa Premsa, although their paella isn’t in the same league as Can Juanito’s. The Santa Catalina restaurant in Calle Fábrica will also do an individual paella if it is requested. Otherwise, paellas at all other places are for a minimum of two.

Although Juanito specialises in paellas he has never offered more than two kinds: a mixed one and another with meats and vegetables. No one complains because both are scrummy.
He does a seafood paella for regulars who request it, but they must decide in advance the content, and the cost must be worked according to that day’s prices.

I have always thought Can Juanito is very much like a typical Parisian bistro: a family business, superb food, sensible prices, with more than half a dozen daily specials on the blackboard — which means seasonal dishes are always available.

But Juanito does something French bistro cooks seldom do: he goes out to the dining room to greet customers, regulars and new ones, tells them what’s available and takes their order. At the age of 77 he goes personally to every table. They don’t make cooks like that nowadays.

On every visit to Can Juanito I have always had the individual paella as a mains or shared it as a starter. Other customers never fail to order a paella. On Sundays and holidays Juanito was doing a steady trade in takeaways long before that style of eating became popular.

When he was taking our order, I asked him if he knew how many paellas he has cooked, but he said he’s never worked it out. As he had a ballpoint and paper in his hand, we calculated how many portions of paella he had done over the past 26 years, always calculating in average minimums. 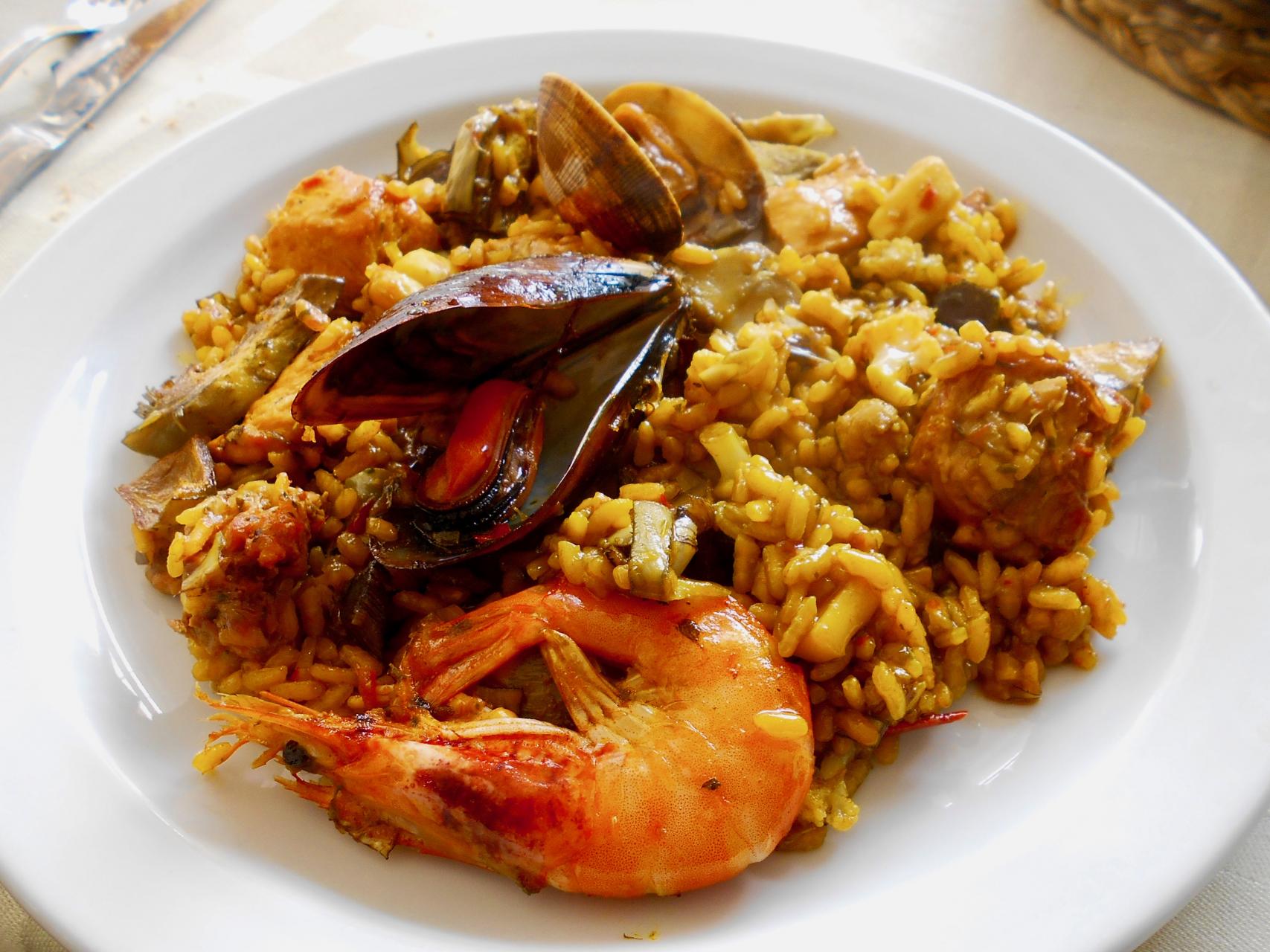 So how was our paella number 270,401? Well, truly unforgettable. It could hardly have been otherwise. Juanito made it.

Juanito’s individual paellas have always been of a generous size. I think this time, however, he added a bit more rice and bits and bobs to our one-man paella. It was more like number 270,401 and a half.

The rice, as always, was al dente but also with a lovely moist succulence. Juanito doesn’t do those dry paellas that are somewhat tasteless. The bits and bobs included, diced pork, chicken, calamar, langostinos, almejas, mussels, cauliflower florets, green beans and sliced artichokes. And everything, not just the rice, was nicely al dente.It was, as always, another memorable paella. And it was worth a 10. As always. I shan’t be waiting another 12 years before returning to Can Juanito. It’ll be more like 12 weeks and I’ll be going back to try some of those blackboard dishes Juanito starts to cook at 8.30 in the morning. And I’ll also have my usual individual mixed paella.

You won’t find escabeche in every Mallorcan restaurant but places that have a large Spanish clientele frequently have it on the menu. If you like pickled food you should give it a try.

Escabeche is one of the Spanish gifts to world cuisine because it was a way of preserving fish in the old days when refrigeration didn’t exist.

When fishermen had a huge catch, there was a limit to how much housewives could buy while the fish was still fresh —which was only a couple of days in the summer heat.
So Spanish housewives had to find ways of preserving fish for a long as possible. One of the things they did was clean the fish (such as sardines, because the summer catches were enormous), flour them and fry them over a high heat in shallow oil along with a few other ingredients such as slices of carrot, lots of peppercorns and other spices and herbs.

This concoction was then well doused in vinegar and if the vinegar was strong enough (and Spanish vinegars can be very acidic) the fried sardines in their spicy vinegar bath could keep for as long as two weeks without refrigeration.

When I first came to Majorca every bar had a refrigerator (although most homes were without them) but even so in many back street places there was always a dish of escabeche on the counter for those who wanted a vinegary sardine on a slice of Majorcan pan moreno to accompany their glass of white or red wine. As Spaniards were introduced to escabeche at a very early age, most of them became adults with a palate that accepted the strong taste of vinegar. 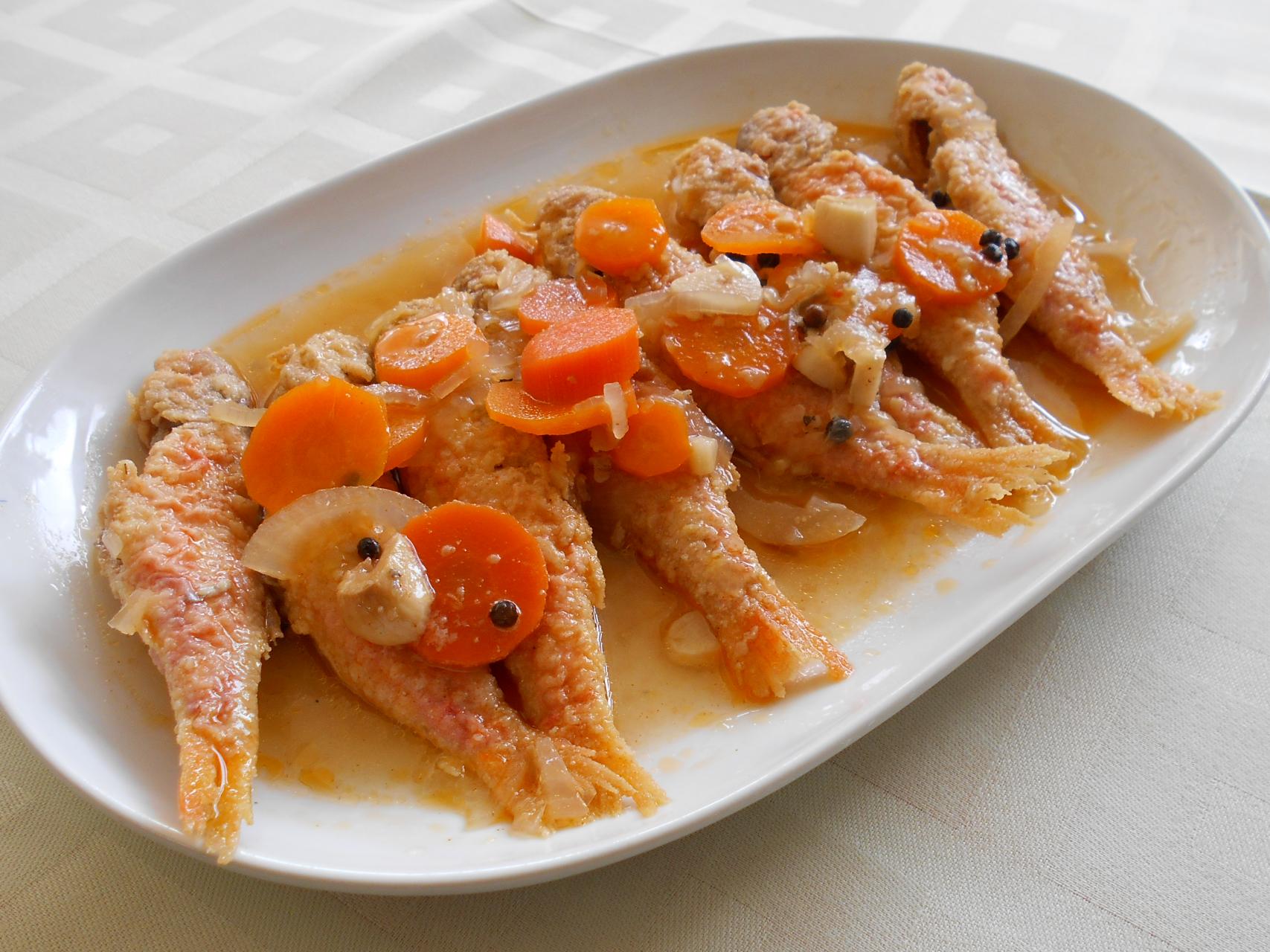 Escabeche slowly travelled the world and you find versions of it all over the place — even in England, where it appeared in 18th century cookbooks as ‘caveach’, a word that could be verb or a noun.

The escabeche method was also used during the game season and those country people with access to quail, partridge and other small game birds, fried them in oil and then gave them the escabeche treatment.

In more recent times, upmarket cooks have been doing escabeche versions of lubina (sea bass) and you will sometimes see an escabeche of partridge.

In the case of Juanito’s escabeche of red mullet, he had seen them on his daily visit to the market and thought they were too small to do as a mains and did them as an escabeche.
It was a good decision because they were the right small size for an escabeche and Juanito’s version was one of the best two I have ever had. The other one was done with mackerel.

The red mullet were ideal for the escabeche — for their size, taste and texture. But what made this dish ideal for my personal taste was Juanito’s use of an extremely mild vinegar. That was one of the reasons I gave it a 10 rating.

Juanito’s paellas are among the best on the island. His restaurant is one of only three doing individual paellas. And at €19 the price is right. He does only two kinds of paella: the mixed one (with pork, chicken and seafood) and one with meats and vegetables. In the 26 years the restaurant has been open, Juanito has cooked some 270,400 portions of paella. So he knows his way round a paella pan. But there’s more to his restaurant than paella, although that is his number one speciality. 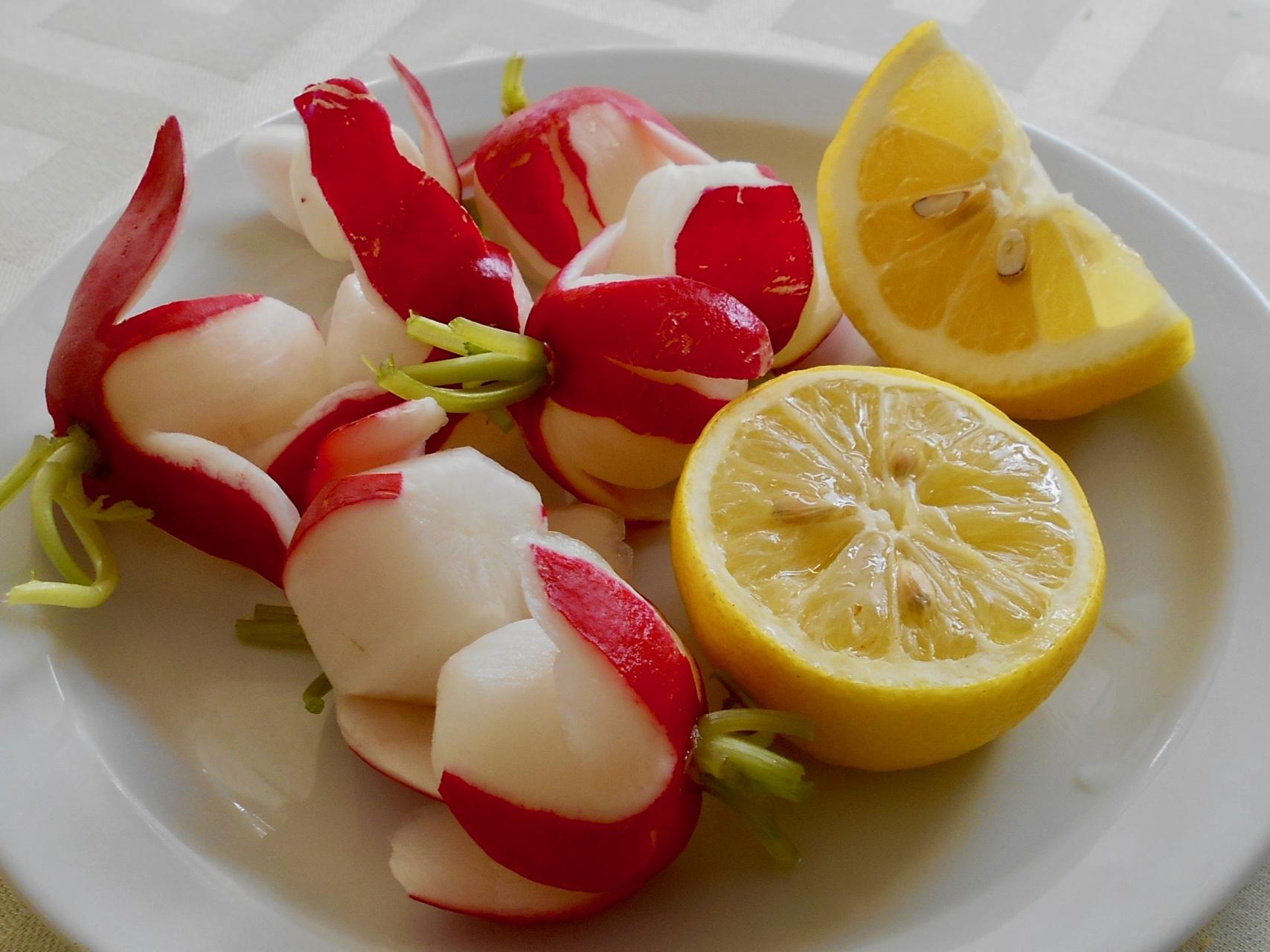 Juanito also excels at batter-fried dishes. Sometimes the ingredients are actually dipped in batter and sometimes they are simply coated with flour. Excellence is always guaranteed. Juanito also has a superb range of homemade tapas which can be ordered as starters. His chicken croquettes are magnificent as are his calamares a la romana and also his floured and fried fresh anchovies, called boquerones in Spanish. The blackboard specials, which can number between eight and 12, are always a good buy because they are made with seasonal ingredients and were bought and cooked that morning.

Cafetería-Restaurante Can Juanito, Avda Joan Miró 20, El Terreno, Palma. Tel:971-730013. Closed for dinner on Sunday night and Monday night and all day on Tuesday. Otherwise open for lunch and dinner. This is the kind of place that can fill up on any day for lunch or dinner so it’s always best to make a reservation.