Top chargrillers can also do fish

The chargrilled sea bass was worth a 10. | Andrew Valente

Most of us have heard of someone who beautifully barbecues a rack of pork spareribs and of others who do a nice job of a butterflied leg of lamb. And there are many who can manage a succulent beef chop. What I have never come across is someone who puts a smallish bream or sea bass on a chargrill and produces a juicy and flavourful piece of fish. I’ve had some very nice bream, sea bass and other fish done on a hot plate but most of them didn’t work — those other fish were always overcooked even on the softer heat of a hot plate.

The fact is that I seldom find a restaurant cook who does chargrilled fish of any kind — it’s just too risky and few even give it a thought.

So I was highly delighted the other week when I saw on a menu that at least one cook does sea bass on the chargrill.

I was in a place called Asador Gotxon Olivar and I knew the head cook is Argentinian — and he wouldn’t be chargrilling a sea bass unless he was confident he could make a good job of it. 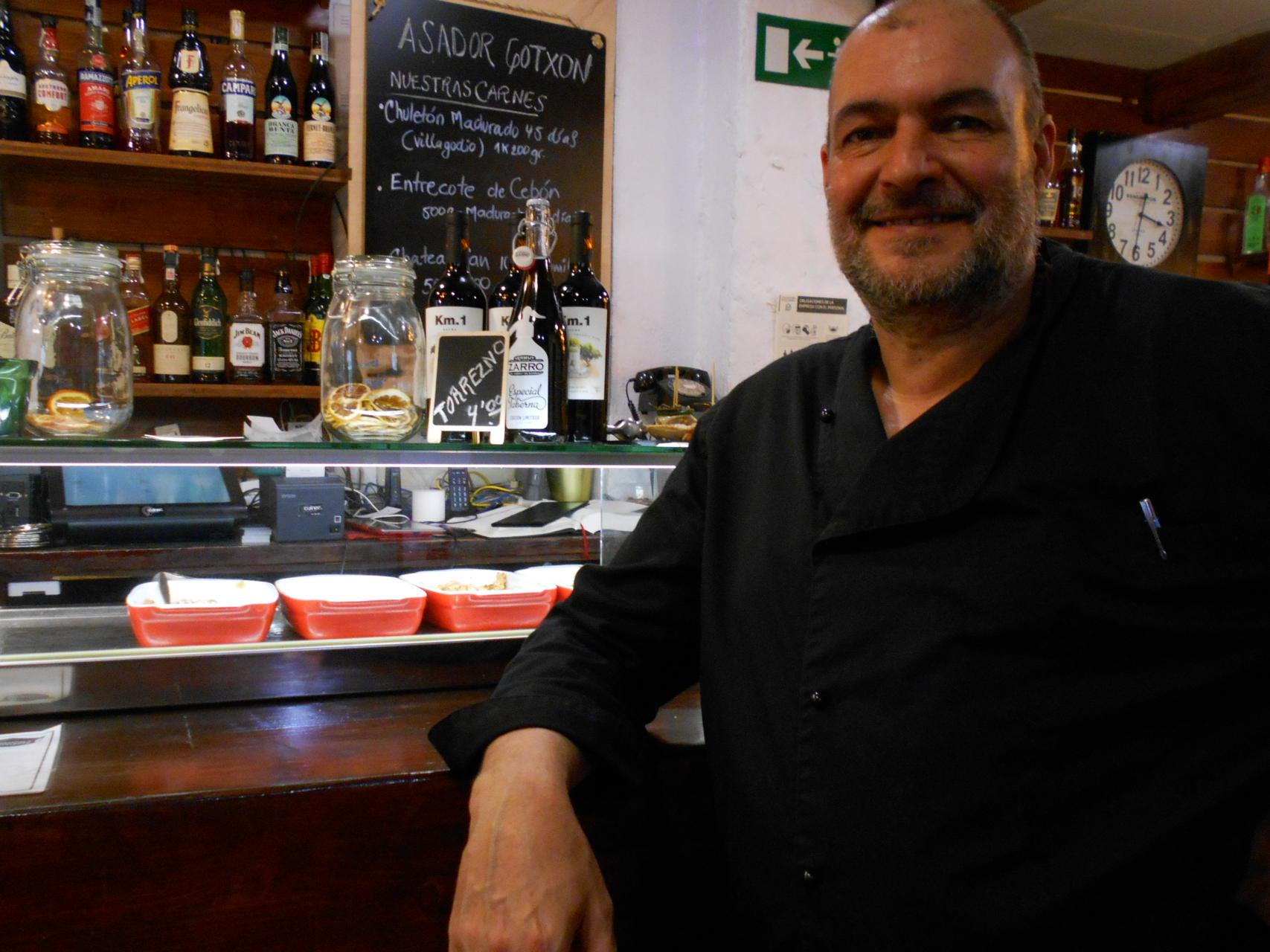 The waiter told me the cook, Javier Gonzalez Mastropietro of Italian descent, chargrilled the sea bass whole — that is, with the backbone intact. That was a good sign because it meant there was less chance of the fish drying out: that backbone helps to keep everything moist and flavourful.

Even so, I wanted to be sure of getting a very moist piece of fish, so I asked the waiter to tell the cook that if the sea bass turned out to be half raw I wouldn’t complain.

“You mean you want a half raw fish?” the waiter asked in amazement. I explained that was just my way of emphasising that I didn’t want a piece of dried-out fish. If it came half cooked, I wouldn’t send it back and would gladly eat it.

Well, the waiter got the message over to the cook and the chargrilled sea bass was easily the juiciest and the best I have ever had.

I had to forego the crisp skin other cooks present in fish of this kind, but I did so gladly in order to see and eat the amazingly moist flesh of this sea bass.

Even the best professionals are inclined overcook all fish. They know most customers want fish that’s well done, and that’s what they provide. But until we have eaten fish that is perfectly moist, we have no idea of how delectable it can be.

About 30 years ago a gourmet friend bought a restaurant-size fish kettle because he wanted to cook a large salmon for a small group of friends. A restaurant cook had told him eight minutes would be enough. But that cook was talking about a piece of salmon, not a whole large one. My friend insisted on giving the salmon eight minutes, but I managed to get the final simmering time up 20 minutes. Even so, this big beauty of a salmon was literally only half cooked — but it was the finest salmon any of us had ever eaten. No one complained about eating half cooked fish.

Many years later, whenever I met any of those who had been at that lunch, there always came a moment when we recalled how memorable that salmon was. That’s how splendid really moist fish can be. Give it a try and see for yourself.

This fresh-baked apple tart was one of the best

Although I’ve never had a sweet tooth and have never been a dessert man, I enjoy good sweet ending to meal…but it has to be something very special and there aren’t all that many really fine desserts out there. 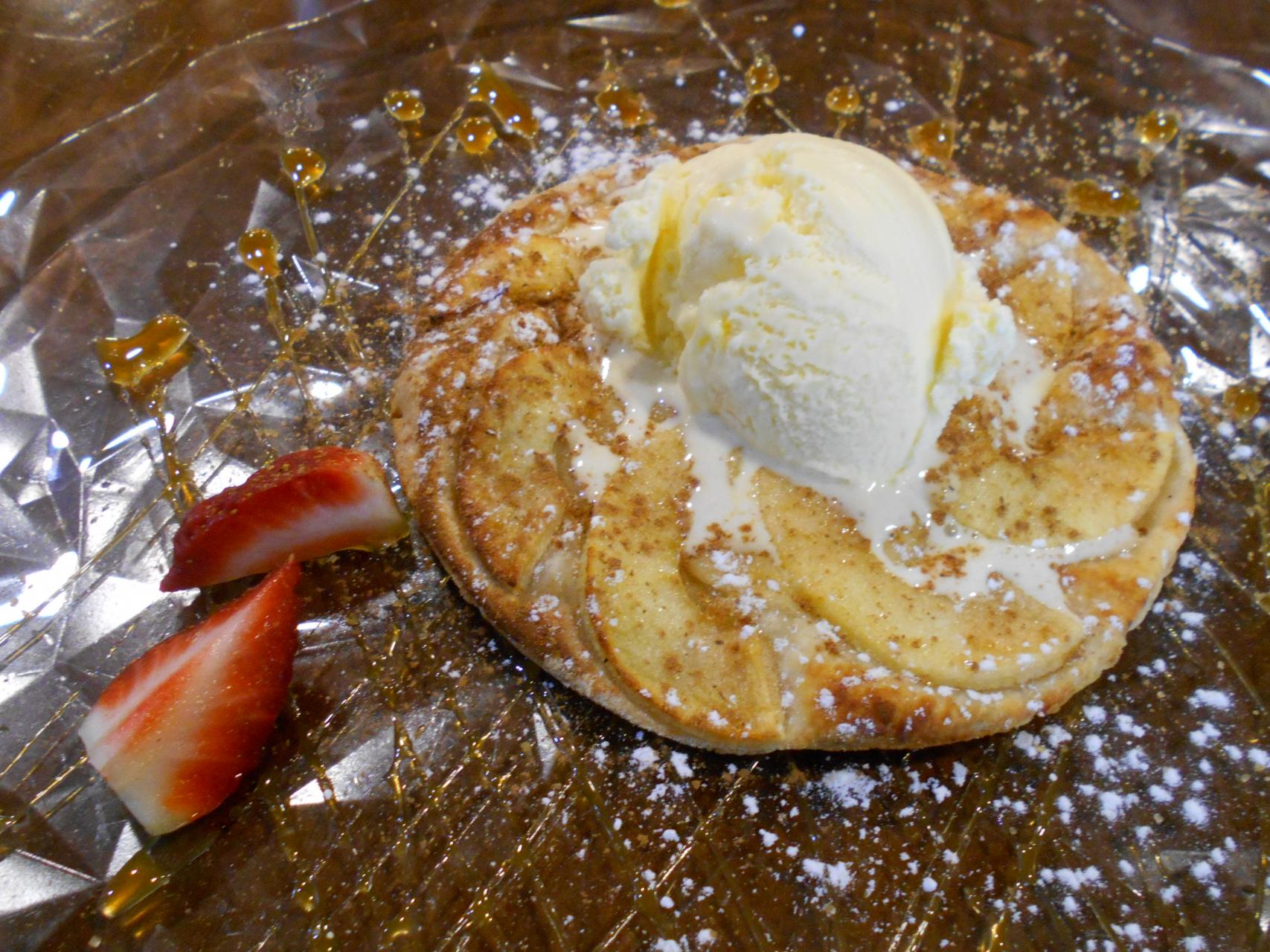 The freshly-baked apple tart was a 10.

But this year I’ve been lucky and I’ve ordered a few extraordinary desserts. Two of them were apple tarts with ice cream and the one on the menu at Asador Gotxon Olivar made it three.

Head cook Javier Gonzalez buys in his flaky pastry but he gets it from a supplier who has products that are made especially for the trade. Javier doesn’t use the ready-made doughs we can buy at the nearest supermarket.

I think that obviously makes a difference because it was the pastry in Javier’s apple tart that I especially liked. The edges were beautifully light and crisp and the tart had come from the oven to the table, so it was piping hot. That meant lovely contrasts of hot and cold when eaten with ice cream. This difference between high and low temperatures is absolutely marvellous and it’s a technique Palma cooks should use more frequently.

In this case the hot and cold changes helped to make this a 10-out-of-10 dessert and one of the three best apple tarts in central Palma. 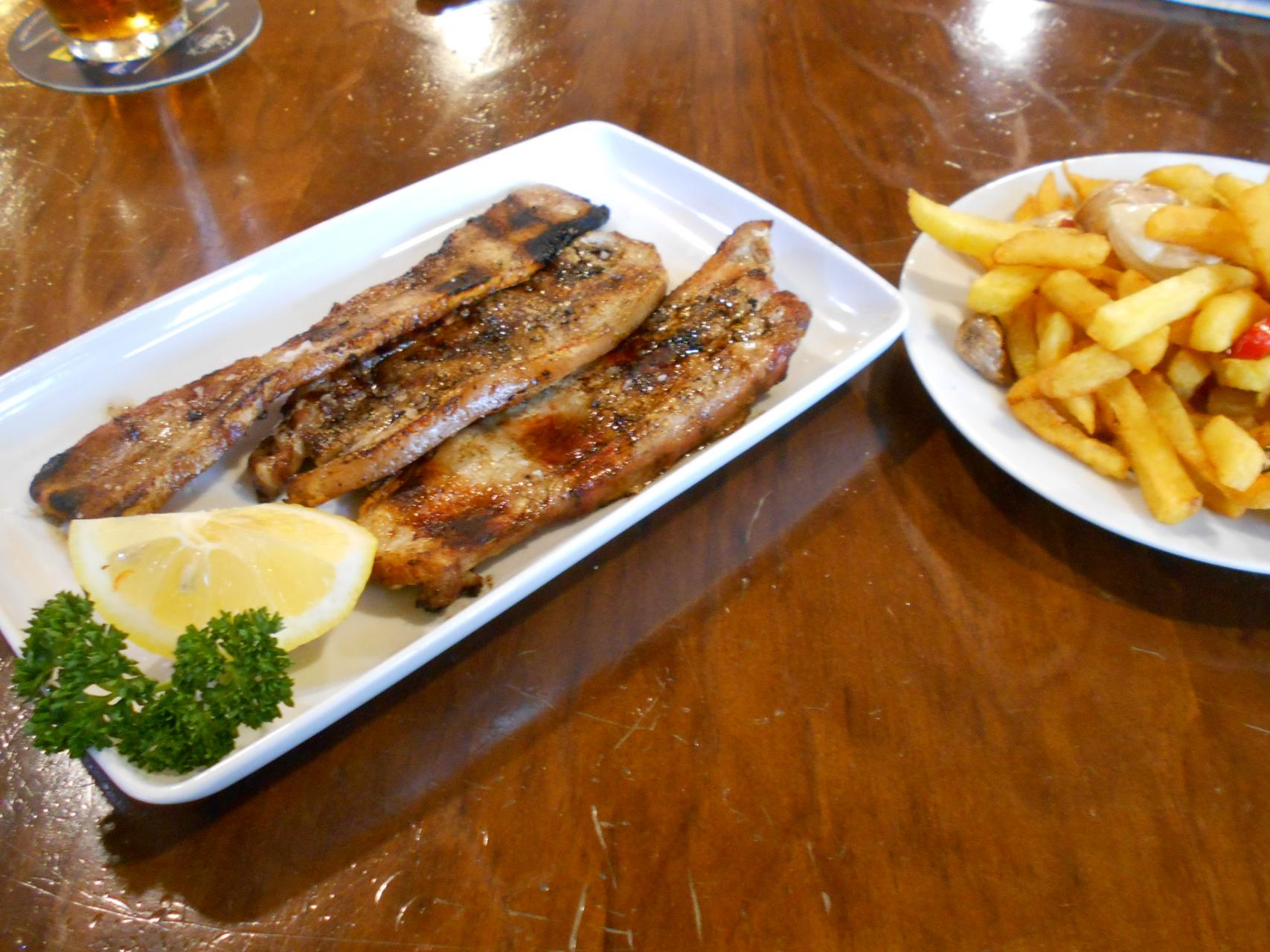 The panceta was especially tasty.

If you like a little bit of fat on meat (it’s the fat where most of the flavour is) then you’ll enjoy the panceta here.

It was a leanish kind of fresh belly of pork but there was enough of the fat to make the three slices and their smoky flavour most enjoyable.

I ordered a portion of chips which were deep-fried with unpeeled cloves of garlic. It was an especially generous serving of chips that cost only €3, a good price nowadays when most places have started to charge more than €4. 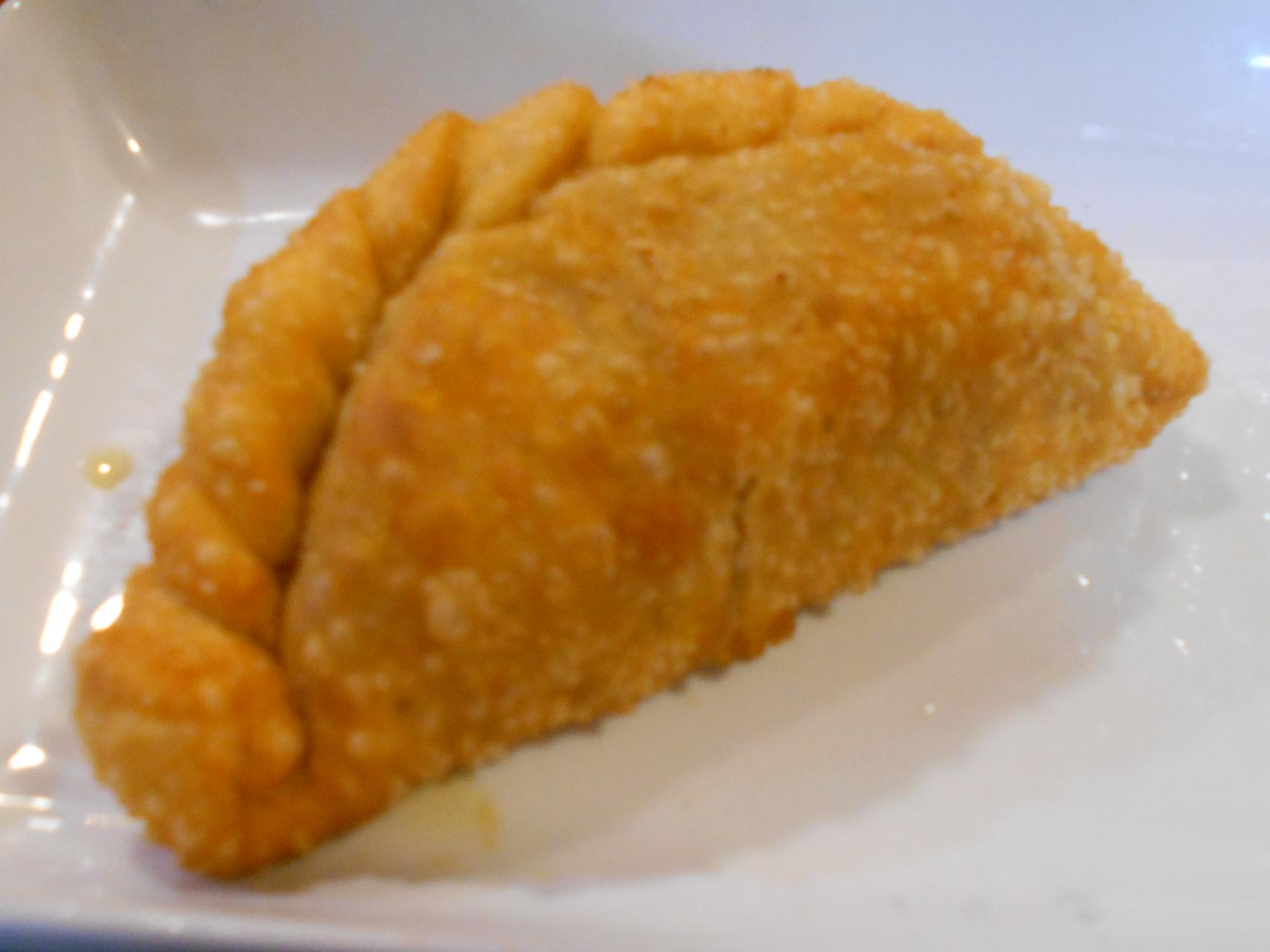 The empanada was a little too moist.

While I decided what I was going to order, I had an Argentinian meat empanada that also came to the table very hot and bursting with juiciness and flavour. So it was a great meal from start to finish.

When a restaurant calls itself an ‘asador’ that means it specialises in the chargrilling of meats, especially the principal cuts of beef. That’s what Asador Gotxon Olivar does best. But they do something most other ‘asadors’ on the island don’t attempt: they chargrill fish to perfection. We asked for our sea bass to be very moist and that’s exactly how it came. The fish was done with the backbone intact and it was especially succulent, easily the best chargrilled sea bass ever — and that was the main reason it was awarded a 10. Slices of fresh panceta (belly of pork) are especially good when chargrilled because the fatty parts become quite succulent and full of smoky flavour. The other highlight of this meal was the dessert: freshly baked apple tart with ice cream. The flaky pastry is a bought-in high quality one and it was perfectly baked with lovely crisp edges and very hot as it came straight from the oven. It was worth a 10 and is one of the best three apple tarts of this kind in the centre of Palma, the other two being at Casa Maruka in Calle Reina María Cristina, and at the Bistró on the 5th floor of El Corte Inglés in Avda Jaime III.