Sun-drenched vegetables hold a very important place in Mediterranean cookery but for me, fresh, shiny peppers with their sweet flavour, crunchy texture and stunning array of colours are the pick of the crop.

Peppers begin their lives green, and when left on the stalks to mature, they mellow, begin to turn red and take on a milder, sweeter flavour. When roasted in the oven with a little olive oil and a couple of crushed garlic cloves, they take on this amazing savoury sweetness and they are without doubt one of my favourite kitchen aromas.

Peppers feature prominently in so many traditional recipes all over the Mediterranean region, especially here in Spain where the locals seem to be practically addicted to them. One of the country’s most popular dishes found in local Tapas bars is a simply fried green pepper sprinkled with a little sea salt called “pimientos de Padron”. They are named after a tiny village in Galicia and eating Padron peppers is very much like the food equivalent of playing Russian roulette as every now and again, there is a chance you’ll bite into one unbelievably hot, fiery pepper capable of bringing tears to your eyes.

My absolute favourite Spanish peppers are “pimientos del piquillo”, a red pepper roasted over a wood fire with a tangy sweetness and an intense flavour followed by a little kick. The best ones are from Navarre in the north of Spain, and more specifically, the surroundings of the town of Lodosa. The peppers are peeled and de-seeded by hand, before being packed in their own juices into jars or tins for sale.

Pure Piquillos have been produced for generations almost entirely by hand, using no chemicals in the roasting or peeling process. So good are Piquillo Peppers from Lodosa that they have had a Designation of Origin since 1987. As the quality of this product is so closely connected to its roots, I think it’s important to recognise this seal of authenticity, which is granted only to those peppers that have been handpicked in the Ribera del Ebro region of Northern Spain. There are, after all, other varieties on the market of varying quality.

‘Piquillo’ is actually the Spanish word for ‘little beak’, as these small, red peppers are shaped like the beak of a bird. They are harvested by hand between September and December. They can be poached slowly with a little olive oil and garlic, then sprinkled with “Flor de sal” and served with grilled meats and fish although their triangular shape, with a slightly curved point makes them the perfect vehicle for stuffing. “Pimientos de piquillos rellenos” are often found in Spanish restaurants filled with minced pork, rice, goat’s cheese or salt cod. 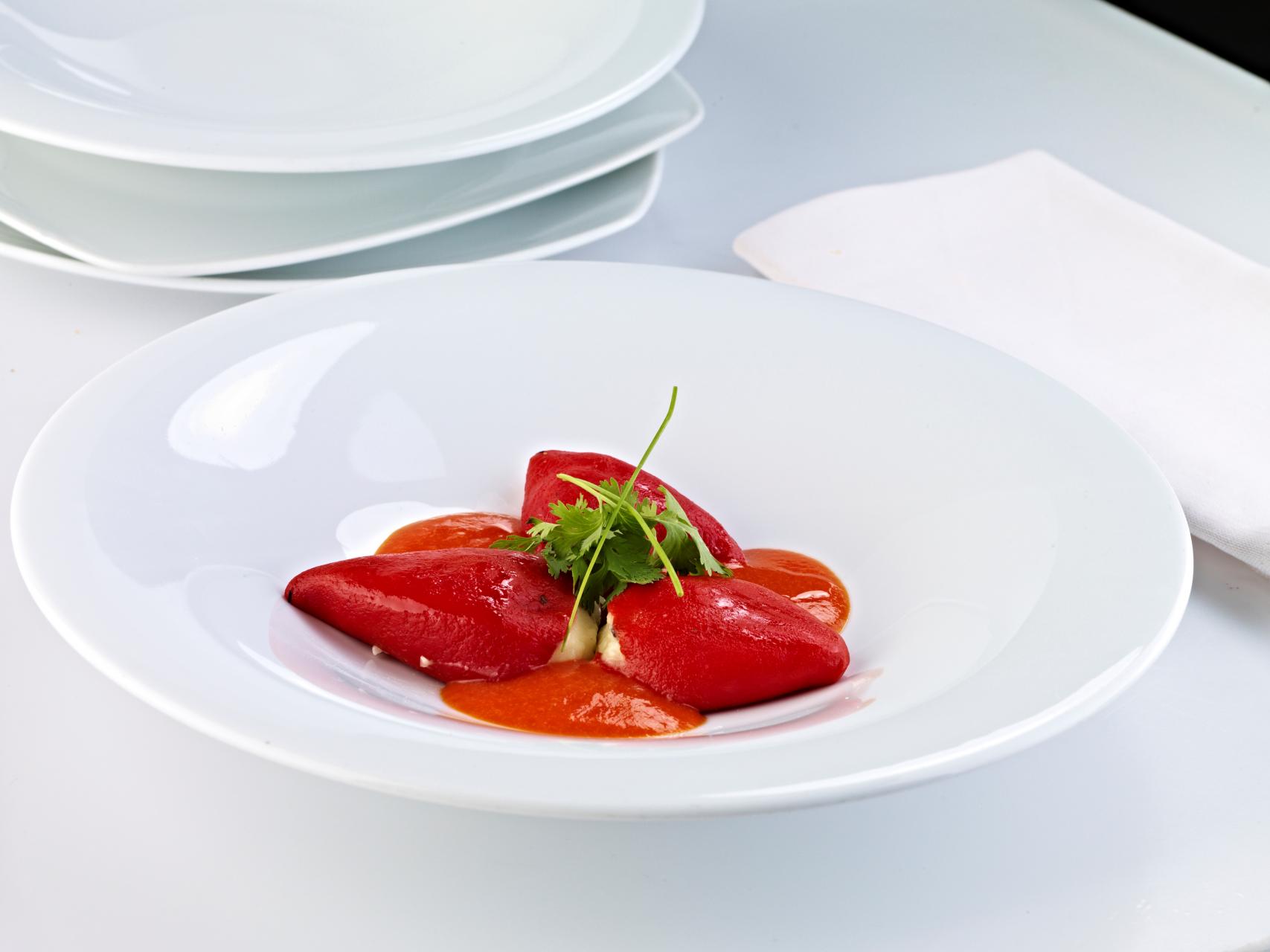 I love this simple dish and you’ll find it in tapas bars all over Spain. For an additional touch, try sprinkling with a few breadcrumbs and some grated cheese before baking in the oven.

Juice of one lemon

Place the salt cod in a pan and cover with the milk. Add the onion and parsley stalks and bring slowly to the boil. Remove from the heat and leave to infuse for 10 minutes.

Drain the peppers and carefully fill them with the brandade. Place in a lightly oiled oven dish and pour over the red pepper coulis. Cover and bake in a moderate oven for 10 minutes or until hot. Serve immediately. 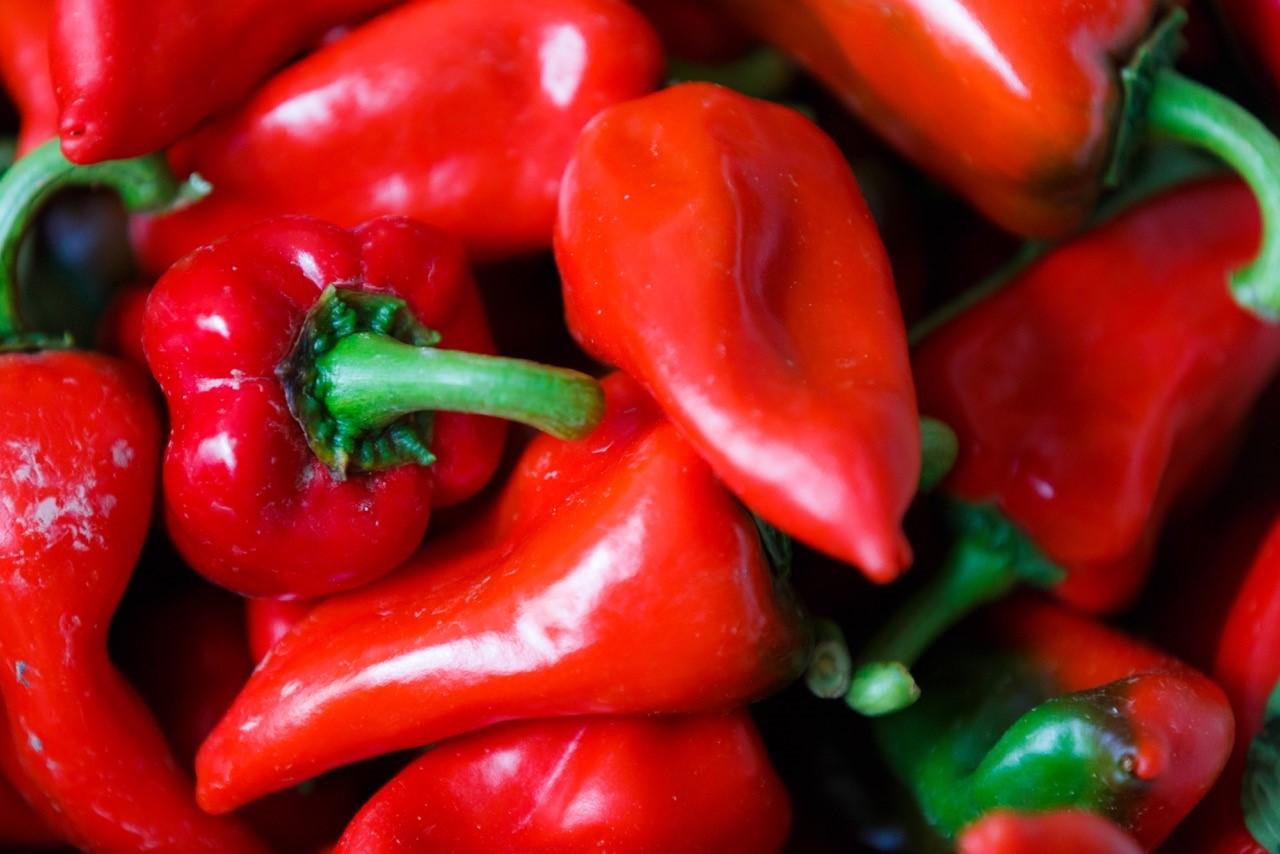 This sauce can also be served with grilled fish, pasta and all types of vegetable dishes

Heat the olive oil in a heavy bottomed saucepan and add the chopped onion. Cook slowly over a gentle flame until they start to soften. Add the red peppers, tomatoes, crushed garlic and sprig of thyme. Cover with a lid and cook for a further 5 minutes. Remove the lid, add the bay leaves, chicken stock and simmer for 20-25 minutes. Remove the sprig of fresh thyme, the bay leaves and blend in a liquidiser until smooth. Pass through a fine sieve, season to taste. 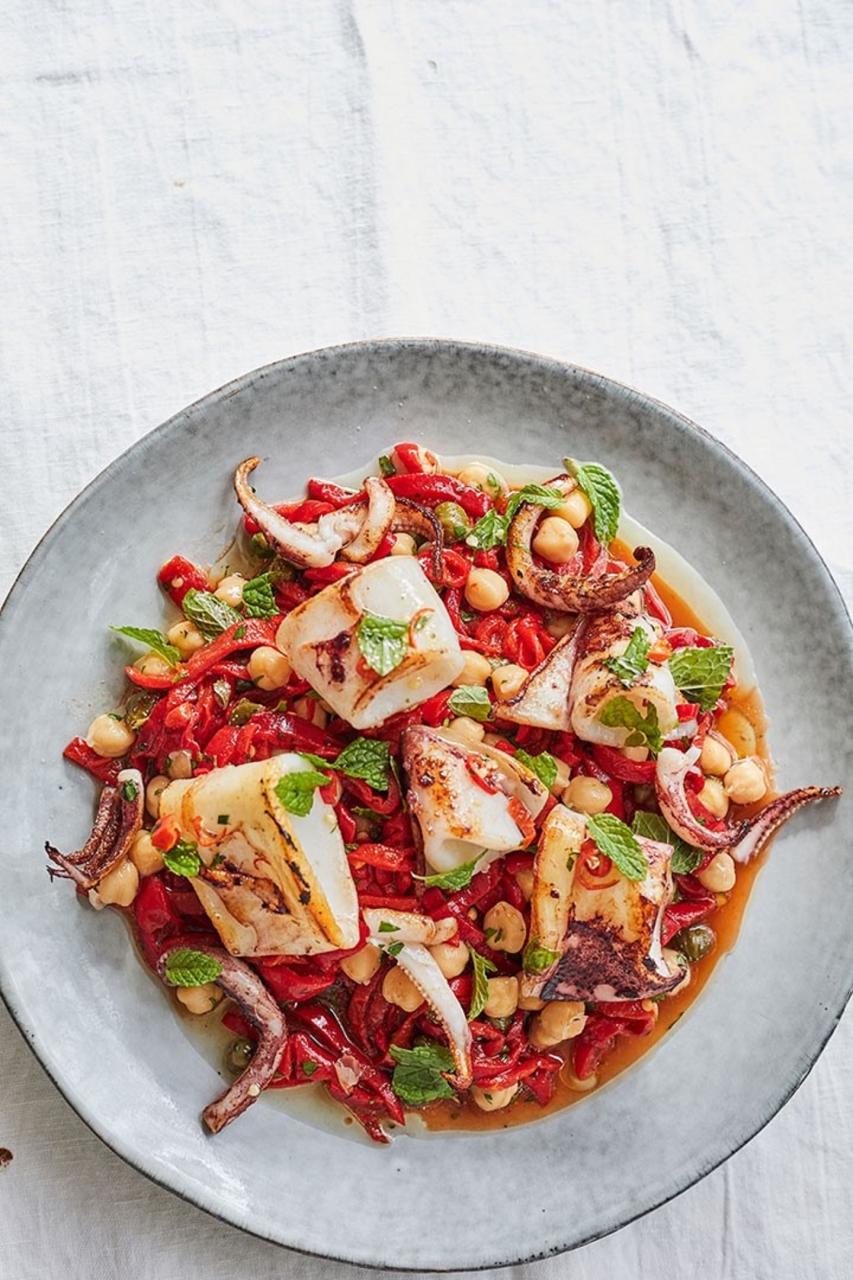 Chickpeas (garbanzo beans), piquillo peppers and preserved lemons are a great combination and work so well with the fresh squid, mint and chillies. Delicious and a real crowd pleaser! I use a local paprika called Tap de Cortí, but you can substitute any type of sweet or slightly smoked paprika, if desired.

12 piquillo peppers from a jar, sliced

To make the salad, combine all the ingredients in a large bowl and refrigerate for 1–2 hours to let the flavours mingle.

When ready to serve, heat a griddle or frying pan (skillet) until very hot. Season the pieces of squid and place them in the hot pan, along with a drizzle of olive oil. Cook for 30 seconds, until slightly caramelised. Turn the squid over, add another drizzle of olive oil and sprinkle with the chopped chilli and mint. Cook for 1 minute, then remove to a serving plate. Serve immediately with the chilled salad. 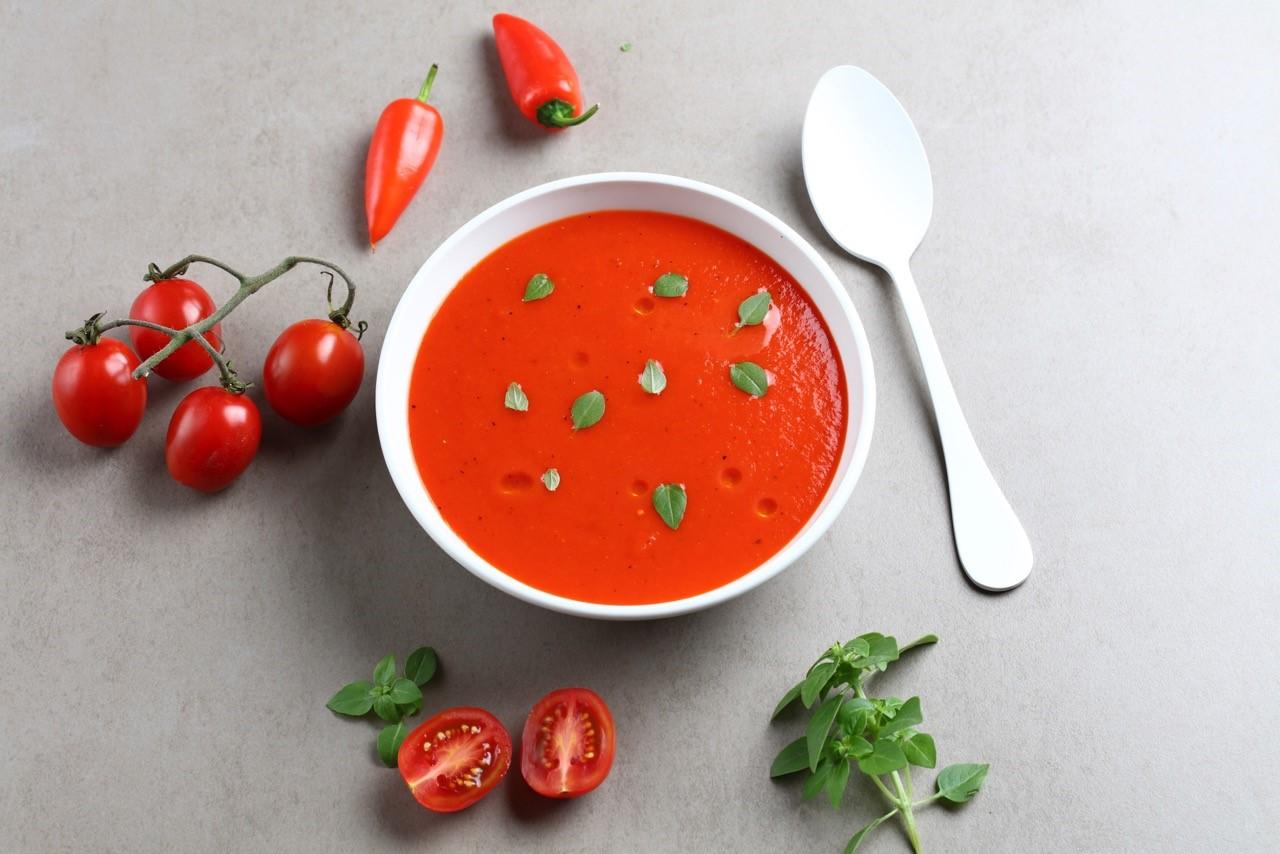 Roasting the tomatoes for this soup really intensifies the flavour and it could also be served hot, if you prefer. The piquillo peppers can also be substituted with two deseeded and chopped red bell peppers.

Put the tomatoes, piquillo peppers, onion and garlic onto a lipped baking sheet, sprinkle with salt and pepper and drizzle generously with olive oil. Mix with your hands to ensure everything is well combined and bake for about 30 minutes, turning occasionally, until the vegetables are tender and just slightly charred.

Blend the roasted vegetables along with the mineral water in a food processor until smooth, then pass through a ne sieve (strainer). Check the seasoning and add the Tabasco if you need a little kick. Chill in the refrigerator for at least 3 hours or overnight.

To serve, ladle into soup bowls, scatter with fresh basil leaves and drizzle with a few drops of olive oil. Serve immediately.