How to cook the perfect steak in 2023

Call me an old fashioned Neanderthal if you must, but every now and then I get a real craving for a rare steak and I think its still one of the purest carnivorous pleasures known to man. Here in Mallorca I often go to Ses Coves Restaurant. I honestly believe that we are extremely lucky to have a restaurant here on the island pushing the limits of what can be cooked over a wood fire and its also something that we will be focusing on at Sa pleta by Marc Fosh in Canyamel, so If you are looking for a quintessential wood-fired dining experience with a strong focus on benchmark steak cuts, head to Ses Coves in Campanet or Sa pleta in Canyamel and you won’t be disappointed.

Although it might seem a little out of sync in these days of political correctness gone mad, but I have to admit that I like my steak oozing with a little blood… not necessarily the type that might be described in an American steakhouse as “take a cow, rip off any horns, wipe it’s arse, and throw it on a grill for 2 minutes; or my personal favourite: a steak so rare, a good vet could bring it back to life! 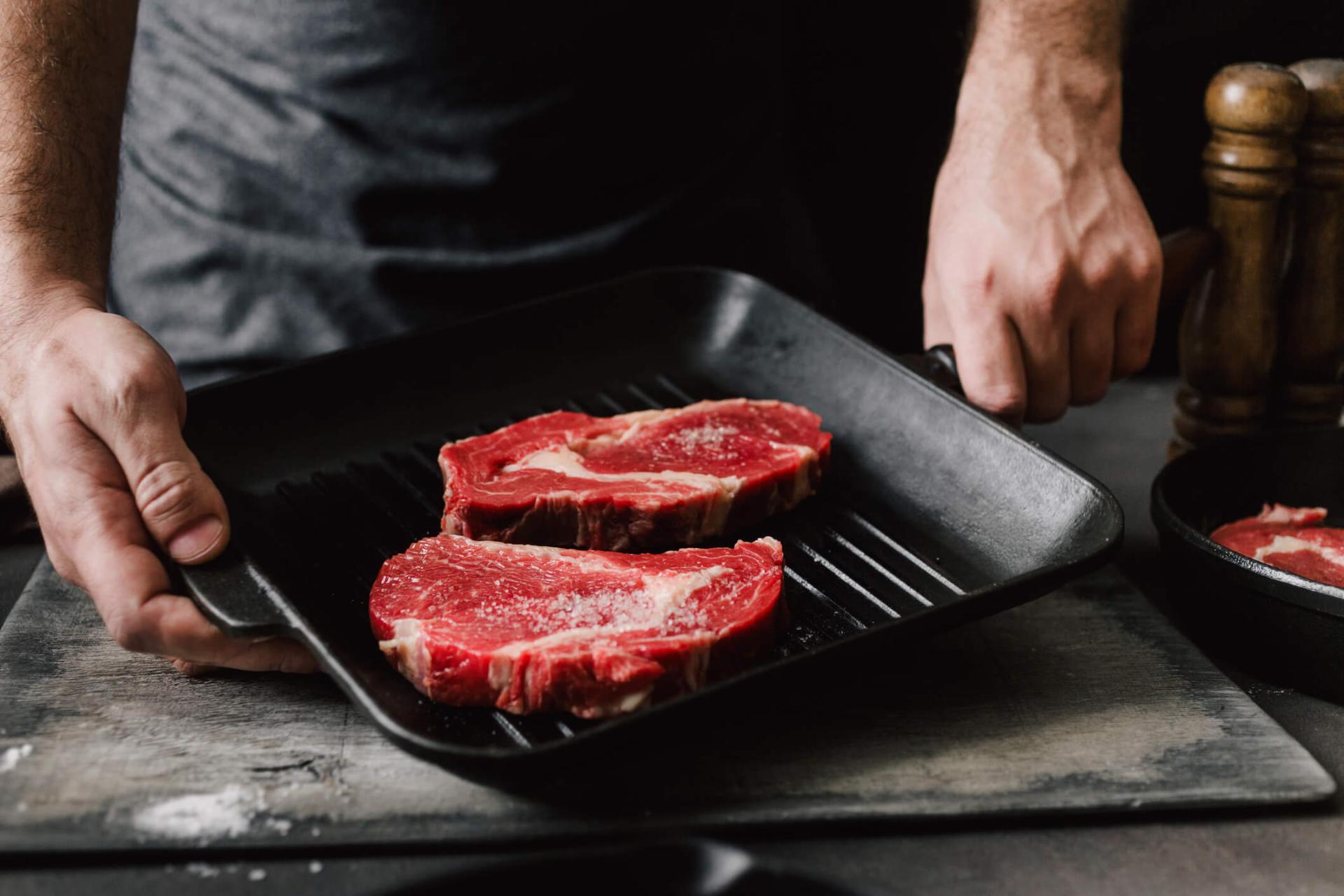 So what are the secrets to cooking the perfect steak?

The first thing to do is find a good butcher you can trust and look for a quality beef with some nice marbling, little streaks of fat running through the meat. This melts when heated, helping the steak to baste itself from within as it cooks. A good layer of creamy-white fat around the top of the steak is also essential. Well aged beef also adds flavour and tenderness, so look for something that has had around four to five week’s minimum.

Now its time to choose the right cut, and while opinion may differ between fillet, sirloin, and t-bone etc as to the "perfect" cut, I prefer to go for rib-eye.

The next step is seasoning. There is also a lot of debate about seasoning a steak before cooking as some claim that salting too early will draw out a lot of moisture. I tend to agree but I think this only happens when you apply cheap, refined table salt and I do think the benefits of generously seasoning with good salt such as maldon or flor de sal and freshly milled black pepper far outweigh the downsides as It will help to build up a delicious salty crust during cooking.

I prefer to cook my steak in a heavy-duty, thick-based frying pan, ideally with a non-stick coating. These types of pans get really hot – ideal for getting that slightly sweet, charred finish to the outside of your meat. If the pan isn’t big enough for all your steaks, don’t be tempted to squeeze them in anyway. Cook them one or two at a time then leave them to rest as you cook the remainder of your batch.

The temperature in the pan must be high enough to trigger the browning process. Contrary to popular opinion, browning, or searing, the surface does not seal in meat's juices. It does, however, produce new and complex flavour compounds as the sugars and proteins in the meat react under high temperatures and the surface colour deepens. This browning reaction is known as the Maillard reaction. I suggest using groundnut oil for cooking steaks – it has a mild flavour and can withstand very high temperatures without burning. Don’t turn the steaks until good seared markings are achieved, then turn them over and cook on the other side.

At this point I like to add a couple of garlic cloves a sprig of thyme and a large spoonful of butter. The rapidly melting butter, flavoured with the crushed garlic and thyme, is then used to baste the steak as it finishes cooking. This gives it a gorgeous richness and intense flavour. You must let the steak rest for about 2-3 minutes before serving, to allow the juices that have been drawn to the surface to relax back into the meat. Steak is an occasional indulgence for most of us, so you may as well enjoy it to the full.

It’s time to open a good bottle of red and tuck-in.

Cooking times will vary depending on the type and thickness of the steak, and how hot your pan is.

Blue: 1 minute each side

Rare: 1½ minutes each side

Medium rare: 2 minutes each side

Medium: 2¼ minutes each side 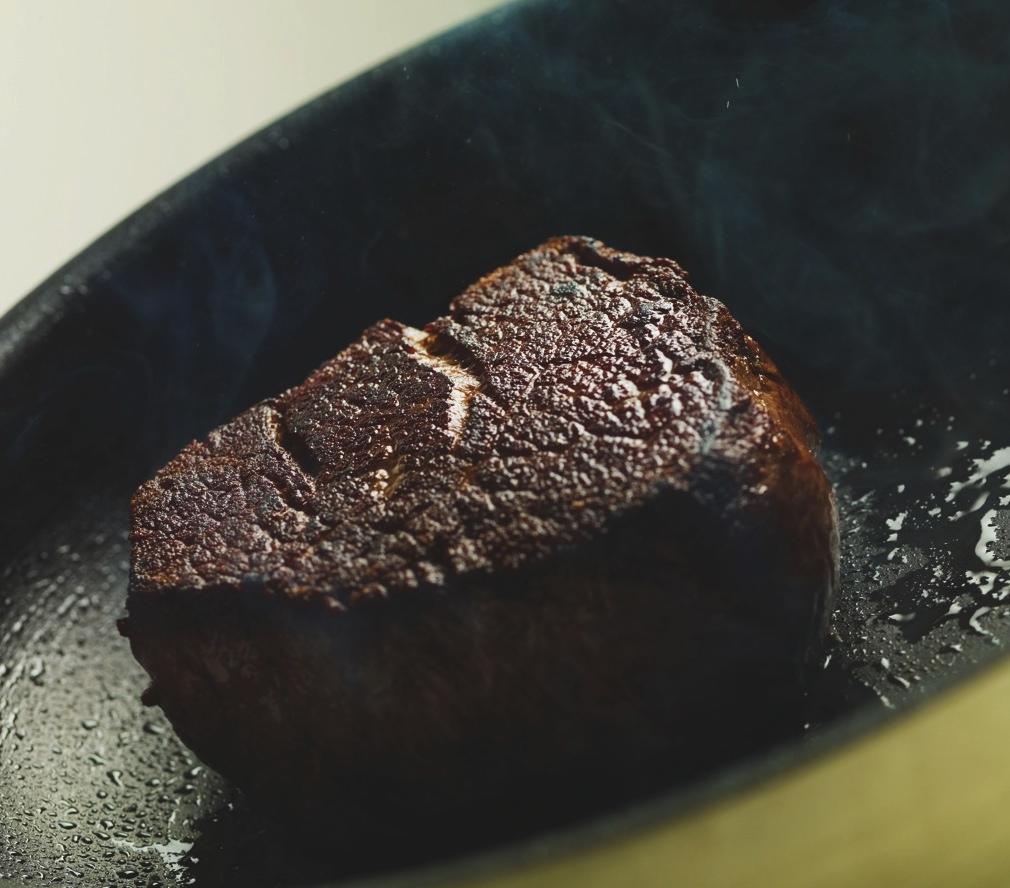 1.Heat half the oil in the frying pan over a high heat, then fry the chopped shallots and pepper until they're softened and slightly caramelized (about 5 minutes) and remove them to a plate.

2.Add the remaining oil to the pan and, keeping the heat high – the pan should be as hot as you dare – season the steaks with coarsely milled black pepper and salt.

3.Add the steaks to the hot pan so that the underneath is seared and becomes crusty. Turn over and cook for another minute.

4.Return the shallots and peppers to the pan, pour the wine around the steaks and, still keeping the heat high, boil until reduced and syrupy. Then add the crème fraîche and stir it into the sauce, then season with salt and sprinkle in the paprika.

5.Serve the steaks on hot plates with the sauce spooned over and garnish with watercress. 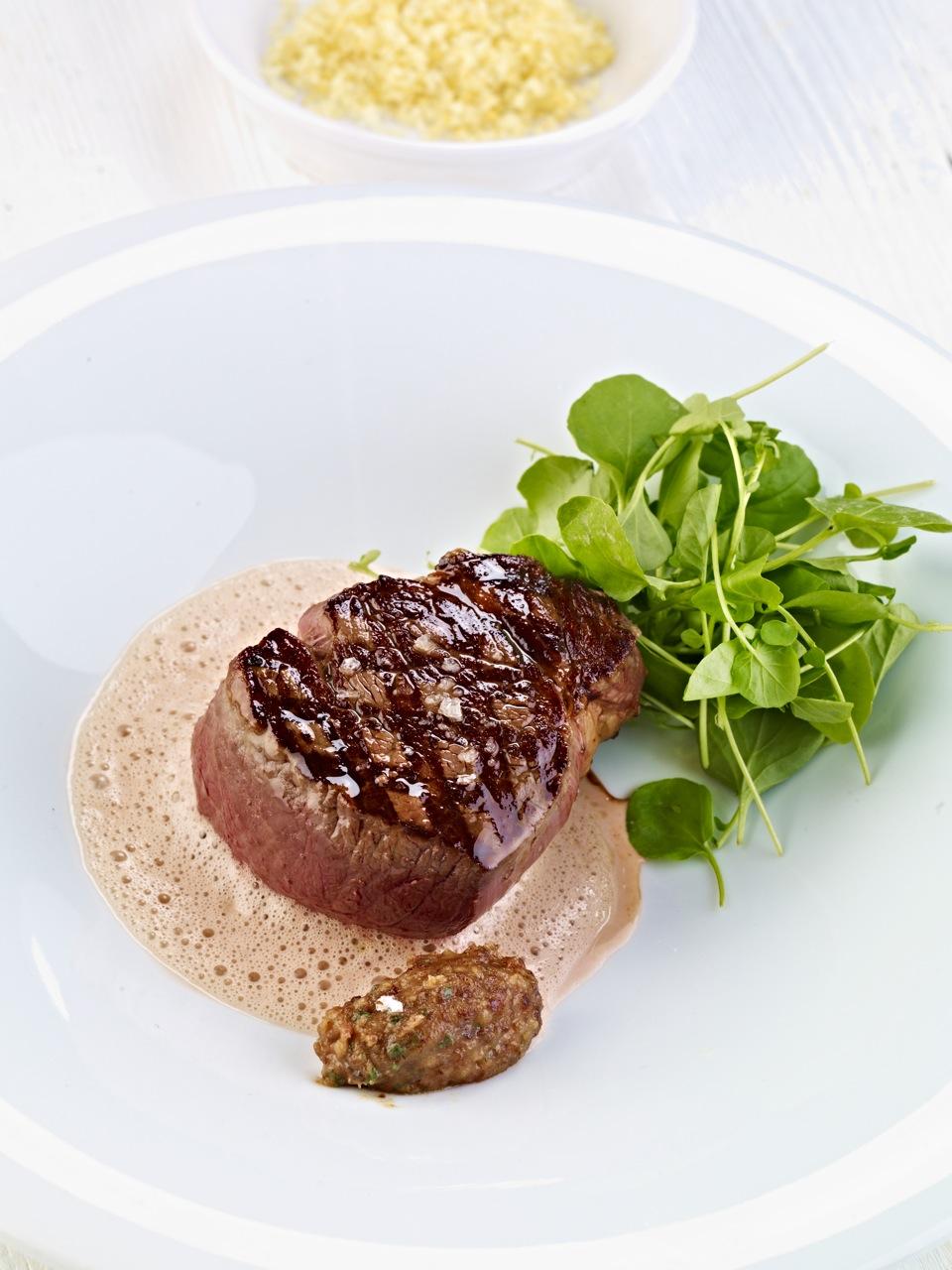 FILLET OF BEEF WITH A PUREE OF DATES AND

2.For the sauce, soften the shallot with the butter in a medium saucepan for 1-2 minutes over medium heat. Add the balsamic vinegar, Pedro Ximenez and cream. Cook until boiled down a little and thickened.

3.Add the foie gras and blend in the saucepan to a form a sauce using a hand blender. Once blended, transfer to a bowl until needed.

4.For the date puree, place all the ingredients in a different saucepan over a gentle flame and cook for 6-8 minutes. When cooked, pour into the Braun Multiquick 7’s Cordless hand blender large chopper accessory and pulse several times to form a puree.

5.Season the steaks with salt and pepper.

6.Over a high temperature, heat a spoonful of olive oil in a large non-stick frying pan. Cook the steaks for about 3 minutes for medium, turning them to seal all over. Cook for a further 1 minute for well done or 1 minute less for rare.

7.Remove from the pan and place the steaks on a shallow baking tray and bake in the pre-heated oven for about 4-5 minutes.

8.Season with salt and pepper and serve with foie gras-Pedro Ximenez sauce and a puree of dates.

When cooking steak, it’s important to buy the best cut of meat you can afford to get the most out of your meal.