The secrets in two fish stews

Wherever you find fishermen you will also find fish soups and stews, sometimes very basic but on occasions rather elaborate, depending on the day’s catch. But whether simple or on a grand scale, a fish soup or stew is always very tasty thanks to the seafood content and the subtle use of herbs and spices.

The Mediterranean fish soup or stew is one of the great culinary delights, and is at its best in the bouillabaisse of Marseilles. But on the whole I think the Spanish variations are better than those of France. 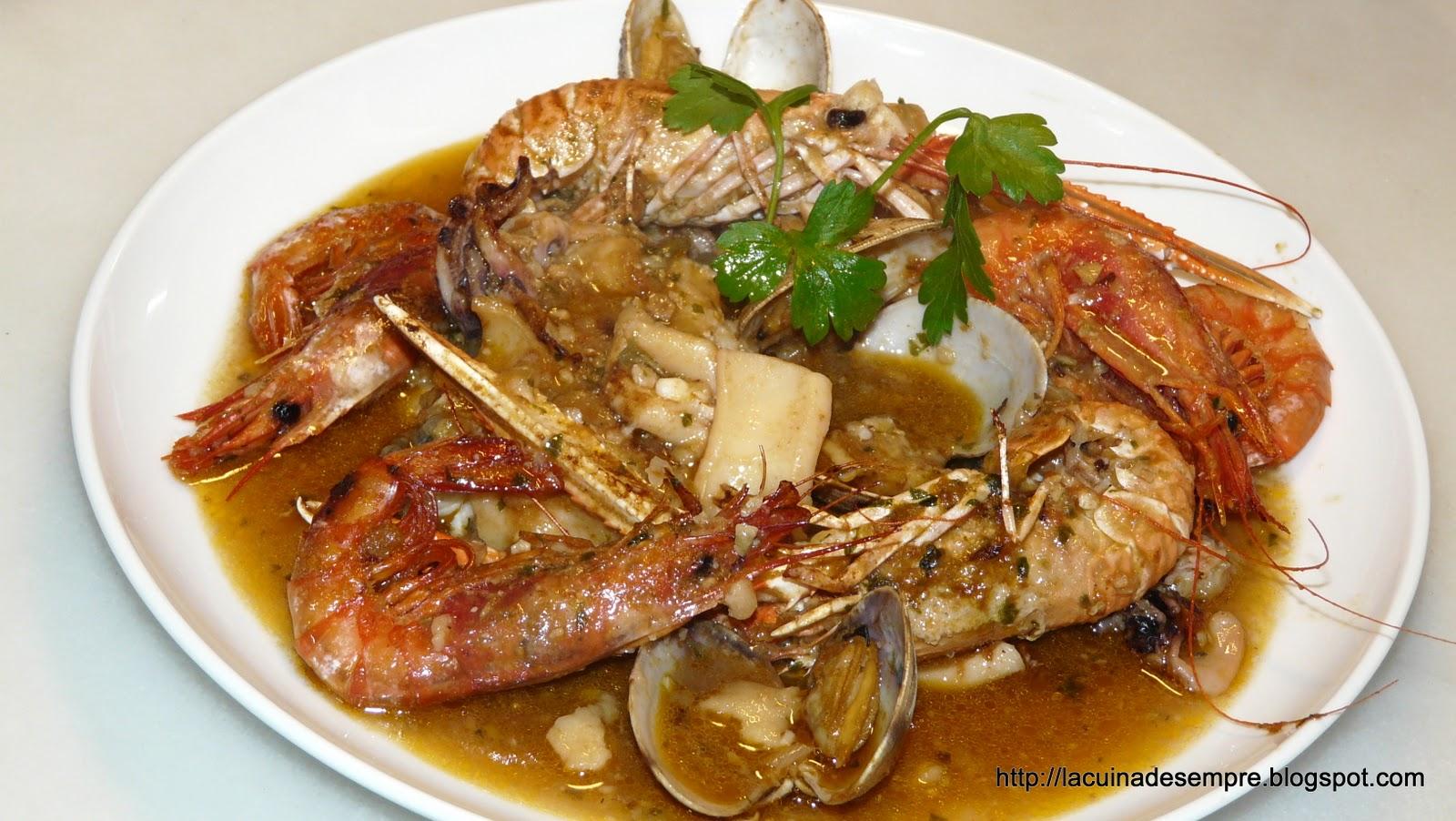 And it takes a lot to beat the Cataláns. Fish soups and stews in Catalonia have a long pedigree and there is an amazing variety of versions along the Costa Brava and inland. If I had to settle for these dishes from only one area, I would choose those from Catalonia.
The Cataláns are fortunate in having an enormous variety of fish to choose from: the small ones full of bones that are highly flavourful and ideal for making stock, to the firm-fleshed specimens that are essential in all fish soups and stews. They also have access to the finest squid, cuttlefish, molluscs and crustaceans.

What distinguishes these Catalán dishes from most others are two secret ingredients that aren’t so secret: our old friends the picada and the sofrito, which I have written about so often in the past.

The picada is used to give body, texture and an explosion of taste to an enormous variety of Spanish regional dishes, including soups, potajes and stews.

The ingredients vary — they depend on the dish and the area — but they always include nuts, fried bread or biscuits to thicken the dish and add a bit of texture, often a bit of sharpness in the form of wine or vinegar and always that powerful injection of flavour that usually includes pounded garlic, parsley and saffron.

The picada has a pedigree that goes back hundreds of years and can be found in Rupert de Nola’s Libre de Coch, published in Barcelona in the 15th century.

It has a recipe for a potaje of squid and cuttlefish finished off with a picada like those used today: toasted almonds pounded in a mortar with a little vinegar and some fish stock.
If Spanish fish soups and stews are so superior to those of other countries, it is also partly due to another little culinary trick with a name and ingredients well known to Bulletin readers: the sofrito.

A good sofrito consists of onions (sometimes spring onions), tomatoes, garlic and parsley cooked slowly together in olive oil (nothing else will do) for a long time — anything from 40 minutes to an hour.

By that time the ingredients are reduced to a thick jam-like consistency, the indispensable base of so many Spanish gastronomic delights.

Both of these ancient techniques are used in two of the greatest Catalán fish dishes: the sarsuela de peix (zarzuela, in Spanish) and the suquet de peix. Both dishes are fish stews and they take a well deserved place on the podium on either side of bouillabaisse.

The suquet usually contains a variety of fish and shellfish, when it is known as suquet de peix, or fish suquet. But a suquet can also be made with only one fish, so we have suquet d’escorpora (made with scorpion fish) or suquet de rap (monkfish), and many others always based on up-market Mediterranean specimens.

It’s very easy to make a suquet although there are dozens of different methods and, as so often happens in Spanish regional cooking, there is a never ending controversy. Should this dish contain potatoes? Some cooks insist on potatoes, others considered them a heresy. People who can’t be bothered with perennial arguments, like suquet with and without potatoes.

A suquet is always made in an earthenware cazuela, although a Majorcan greixonera would also be ideal. Some cooks make the sofrito in the cazuela, add the fish cut into smallish pieces and stir in the picada five minutes before they serve the suquet.

Others dispense with the sofrito and make a more elaborate picada containing the liver of the fish if it has one, a glass of rancid wine (vino rancio, available at many supermarkets), a little flour, and sweet paprika, as well as the usual toasted nuts or fried bread, garlic and parsley.

Either way, the fish is cooked for only a short time with a lid on the cazuela. Just before the suquet is served, some cooks stir in three or four spoons of garlic mayonnaise. Others prefer to serve it on the side so that guests can help themselves.

Apart from being a fish stew, a zarzuela is a traditional Spanish operetta which gets that name because the first one was performed in the old Real Sitio de la Zarzuela, now known as the Palacio de la Zarzuela, the home of the Spanish Royal Family.

The succulent Catalán fish stew was given the zarzuela name because the stage of a Spanish operetta is teaming with singers dressed in bright costumes and the fish stew is also most colourful with its fish, molluscs and crustaceans of bright hues on a saffron background.

It’s also appropriate that this Barcelona dish was given a name associated with the operetta stage because some of Spain’s finest opera singers, such as Montserrat Caballé and Josep Carreras, were born in Catalonia.

A zarzuela always contains a nice variety of white firm-fleshed fish as well as shellfish and bivalve molluscs. I’ve seen recipes in which a dish with one main fish ingredient was called a zarzuela, but this is an aberration and a complete misuse of the word.

There is no absolute classic way of making a zarzuela, so an authentic version can vary from area to area and from cook to cook. As a means of thickening the stock, some cooks add a little flour to the sofrito.

Some coat the fish with flour before frying it in the cazuela, others wouldn’t even consider doing this. The vast majority of cooks prefer to thicken a zarzuela with a picada containing toasted almonds or fried bread.

However, other cooks prefer the sauce of a finished zarzuela to be on the thin side and add a picada made only with garlic, parsley and a little of the liquid in the cazuela.

And a few famous Catalán cooks put the zarzuela into a very hot oven for a few minutes before serving it. Whatever method is used, a zarzuela should always have only a smallish amount of flavourful sauce and great care must be taken to ensure the fish and shellfish aren’t overcooked.

You seldom see zarzuela on restaurant menus nowadays — even in those that specialise in seafood — although I would think that some of the better places would do one to order, perhaps for a minimum of 4-6 people.

In the early 1960s most of the fish restaurants in Palma did zarzuela and one made the best version I have ever had. It was La Cantina and it was on the road going down to the Real Club Náutico.

As the name suggests, La Cantina was a restaurant without frills of any kind — but everything that came out of the kitchen was absolutely first rate. It was owned by a Majorcan couple, with the wife doing the cooking.

Palma’s wholesale fish market, La Lonja, was right opposite La Cantina so the cook didn’t have very far to go to get the freshest fish in town.

In those days anyone could go to La Lonja and buy the fish and shellfish the local fishermen had on display — but they had to be there before 5am which was when restaurant cooks started to bid for the fish.

Everything was in wooden boxes lined up on the floor. The seller was usually the fisherman’s wife but at some places he was also there.

A 5am visit to La Lonja became a ritual for Palma buddies who had spent a summer night on the town and finished their bar crawl at La Lonja before going to the nearest bar (many were open at that time in the old days) for coffee and freshly baked ensaimadas — and then home to bed.

Nowadays you have to be a professional buyer to get into La Lonja and the bidding for fish has become digitalised, the boxes of going along on conveyer belts with the prices being flashed on a screen. It’s more efficient but it certainly doesn’t have the allure of former times.

When we went to La Cantina we were always sure that every dish on the menu was done with very fresh fish. La Cantina was one of those places where every dish was a delight and the cook knew how to get the best out of every fish she handled.

La Cantina was famous for its zarzuela: most connoisseurs considered it to be the best one on the island. In the mid-1960s the Bulletin staff on the night shift — a linotypist, two typesetters, a printing pressman, a proofreader and myself — used to go for a zarzuela every Sunday night. Then, as now, there was no Bulletin on Mondays, and Sunday was our only night off.

The cook at La Cantina made her zarzuela with a lovely thick sauce and perfectly cooked fish and shellfish. But what made it especially different for me was the incredible flavour of anise. It was very much to the fore but in no way overpowering.

I asked the cook how she managed to get this taste but she said it was a secret and would never tell me. I reckoned she probably did it with fresh fennel (which grows wild in Majorca) or perhaps some anise seeds were used in the picada.

I used to pester her for the recipe but she always refused, telling me she’d let me know when she retired. Well, she and her husband eventually did retire and on our visit for the last zarzuela she kept her word and revealed her little secret.

It was quite simple and perfectly normal but it had never occurred to me. As I said earlier, some cooks add rancid wine to their picada, but not the cook at La Cantina. She added a shot of Provençal pastis, either Ricard or Pernod. It works beautifully.

She stirred in the pastis when it was needed and swirled the cazuela and shook it up before adding it to a very hot oven to burn off the alcohol and leave nothing but the anise taste.
It’s a little trick worth knowing and over the years I used it on other fish dishes. That’s one of the reasons why I always have a bottle of Pernod or Ricard at hand.