Chorizo - The king of the Spanish Larder

Traditional Spanish cooking has popular roots. It is the people’s cuisine. What I most admire is that it is down-to-earth, uncomplicated food, based on the ingredients available locally or the crops grown regionally.

The food also reflects Spain’s complicated history. The incursions of its many settlers from the Phoenicians, Romans, Greeks, and Arabs and off course, the Moors have all left their imprint on its cuisine. The further north you travel the influences become more European and the further south you go the flavours and ingredients are more associated with Morocco and North Africa.

But weather its north or south, for me the two basic ingredients of all Spanish food are olive oil and garlic. They are quite simply the air that Spanish kitchens breathe. But if I had to choose just one Spanish ingredient that really defined this wonderful, varied cuisine…I would have to choose Chorizo!

Chorizo, the quintessential Spanish sausage, is thought to have originated in Extremadura. Originally it was a rather pale looking specimen as it was not until the conquistadors introduced red pepper to the new world that it started to resemble the dark red, smoky pork sausage flavoured with garlic & paprika that we enjoy today. Other ingredients along with pork and pork fat include salt, and occasionally white wine, sugar or sherry. The latter aid in the fermentation process which gives chorizo its typical, slightly tangy and acidic taste. To make chorizo, the pork and lard mixture is marinated for one to two days in the seasonings, and then is stuffed into either pig intestine casings or synthetic ones made from collagen or plant cellulose. They are then hung to dry and cure, or in some wetter parts of Spain, lightly smoked before hanging. The final product is usually given one of the following shapes: vela (long, thin and straight), ristra (small and tied together) or sarta (U-shaped). The best chorizos are labeled “Iberico”. These are made from Iberian blacklegged pigs that are free-range and allowed to graze on acorns. The chorizos are then matured for a minimum of 3 months.

Here in Majorca, sobrasada is more popular and it is now firmly one my favourite ingredients. It has a wonderful smokiness and can add its flavour to so many recipes from “huevos rotos”, Spanish style clams to ham and chicken croquettes. You can stir it into risotto, potato puree and it also makes a wonderful crust when mixed with breadcrumbs and herbs for delicious roast pork. 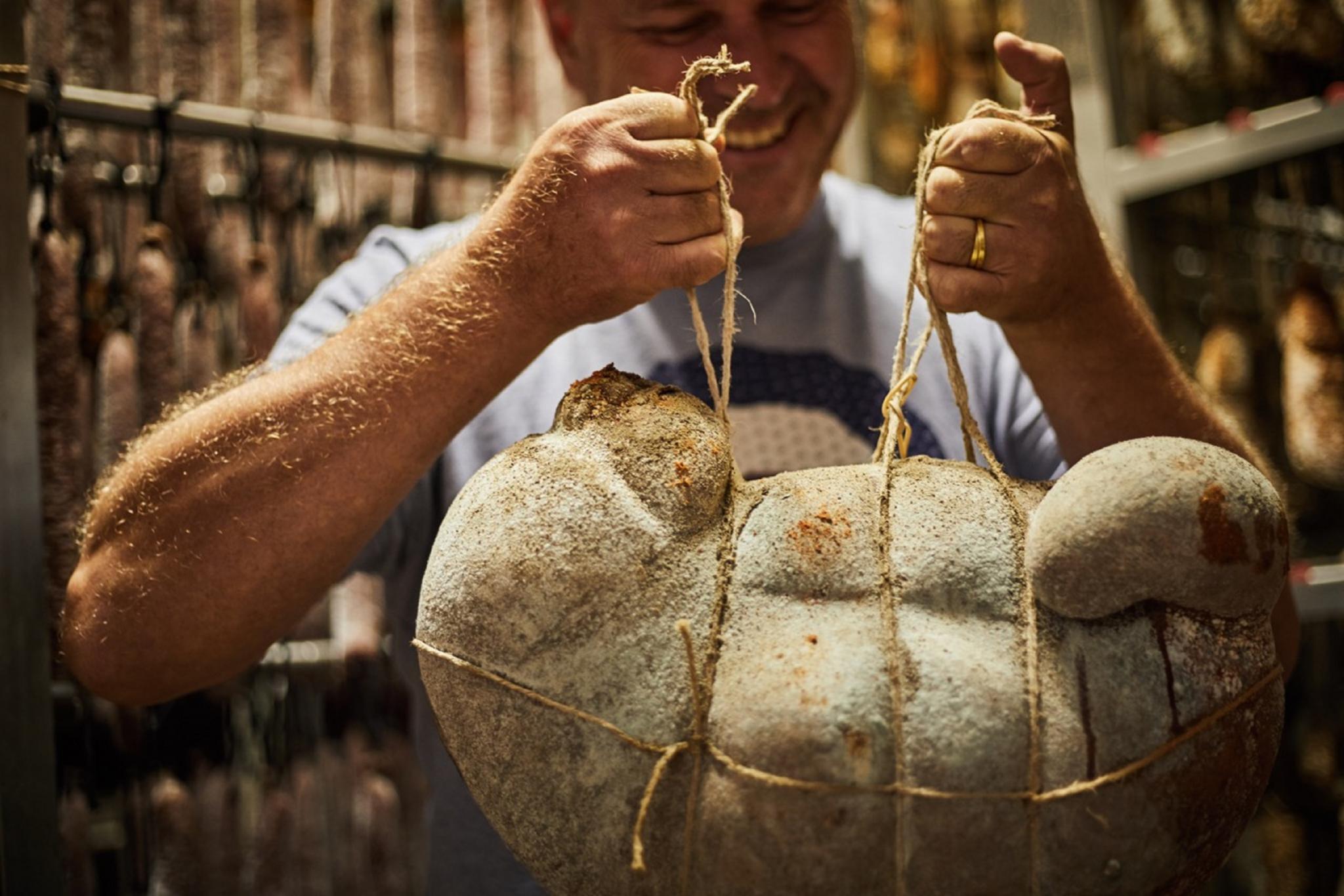 Chorizo works well with squid, octopus, scallops and flavours so many of Spain’s classic dishes including a long list of “potajes”(one pot dishes) from the delicious “Fabada Austriana” to the rustic, heartwarming “Cocido Madrileño”. They also work their magic in a large array of Spanish egg and rice dishes as well as potatoes in “Huevos rotos con chorizo” and one of my simple, all-time favourites, “Patatas a la Riojana”.

Heat the olive oil in a large heavy-bottomed saucepan. Add the chopped onions, peppers and crushed garlic. Cook over a gentle flame until the onions start to soften. Add the diced ham, chorizo, paprika and diced potatoes. Cover with chicken stock and cook gently for about 30 minutes until the potatoes are just cooked. Using a ladle, skim off the fat and impurities that rise to the surface during cooking. Season with salt and pepper, pour into a soup tureen and serve at the table.

Stir the tomatoes into the chickpeas with the lemon juice, 4 tablespoons of the olive oil, the chilli, garlic, flat-leaf parsley and some salt and pepper to taste.Heat the remaining olive oil in a large frying pan over a high heat. Stir-fry the squid for 2 minutes until golden brown and caramelised. Season with salt and pepper and remove from the heat. Add the chorizo and mix well.

Briefly toss the rocket leaves through the chickpea salad and spoon into the centre of 4 plates. Top with the sautéed squid and chorizo and serve. 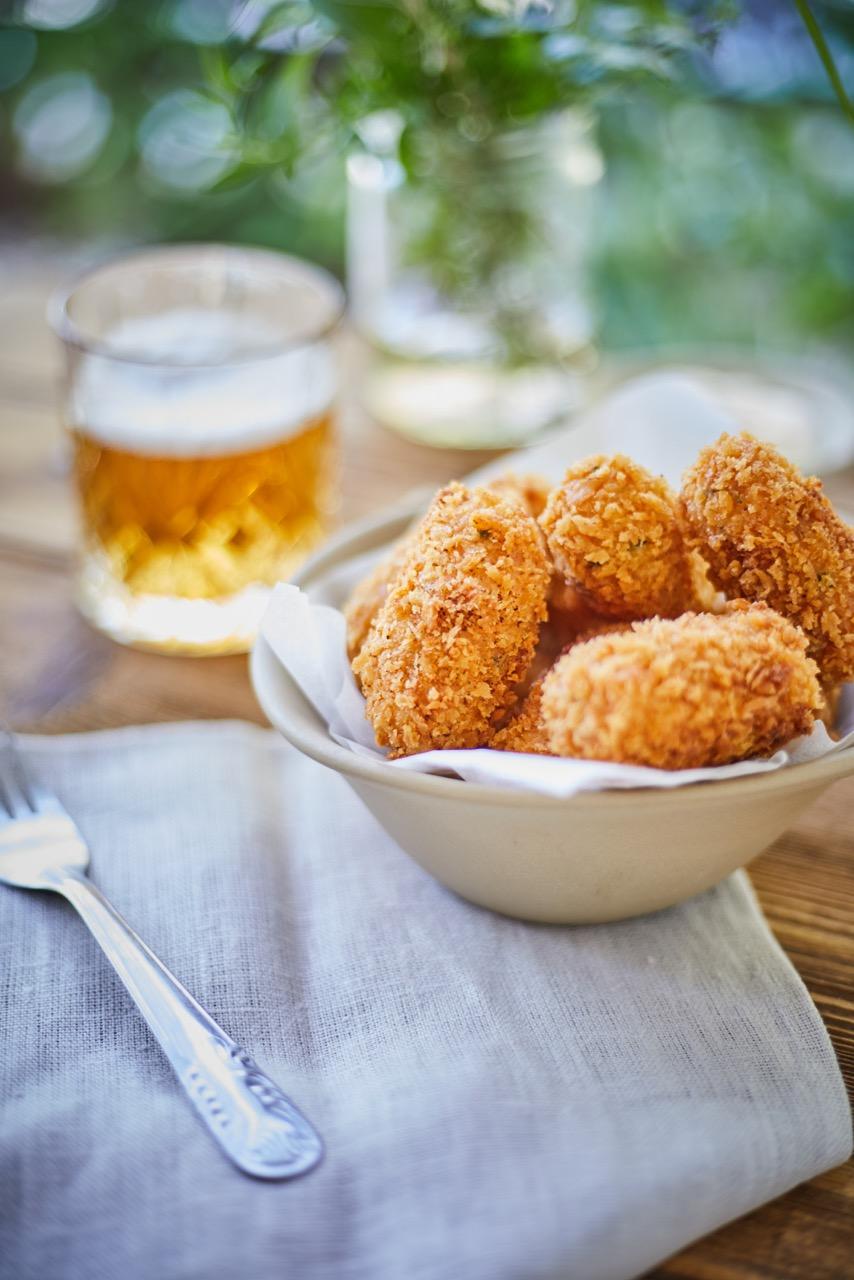 Bring the milk to the boil with the bay leaf and the peppercorns. Remove from the heat and leave to infuse for 10 minutes before straining. Then melt the butter and olive oil in a medium saucepan, stir in the flour, and cook over a low heat for 3-4 minutes. When smooth, start adding some of the strained milk. Stir until smooth, and then add more milk until the sauce is thickened.

Add the sobrasada and honey and cook for 10-15 minutes, whisking regularly until you have a smooth, thick béchamel sauce.

Stir in the chopped parsley, season with salt and black pepper then transfer to a shallow container and cover with a piece of cling film to prevent a skin forming. Allow to cool to room temperature then chill for a minimum of 4 hours, or overnight.