The best ever menú del día

The canelones were up to à la carte standard. | Andrew Valente

It was 11 weeks. Seventy-seven days, the time that elapsed between March 13 and May 28. The first date: my last restaurant meal before the virus brought about the State of Alarm that shut down bars and restaurants (among other things). The second date: my first meal out since restaurants were allowed to reopen — with all kinds of restrictions.

So what’s it like to eat in a restaurant in the post-virus era? Well, that first meal, at Casa Gallega in the Avenidas, was a tremendous start — the €15.50 menú del día was the best I have ever had.

The restrictions? They’re all for the management. There are fewer tables and chairs and, of course, not so many customers — even when the place is full.

That means a more tranquil and quieter dining room: you can converse without having to shout at each other. And that’s something I never complain about.

I’ve had the Casa Gallega menú on several occasions and the quality has always been first class. I’ve also eaten other superb menús at prices ranging from €10.50 to €18.50.

But I’ve never been able to pinpoint one of them as the best ever, because that’s not at all easy when you take quality and price into account.

However, the menú at Casa Gallega last week was so superior in every way that it was, without a doubt, the best one I have ever eaten.

Management obviously wanted to welcome back its regulars in a big way and did it with a lovely show of gastronomic fireworks. We had a choice of five starters instead of the usual three, and the mains included cod, fillets of John Dory with crispy deep-fried onions and a fillet steak. Yes, a fillet steak. What a marvellous trio. And on a €15.50 menú del día.

I have never seen a fillet steak on any kind of fixed price menú, no matter what the price — with a €15.50 tag, this was the mother of all menús. When a menú contains one especially good and expensive dish (such as fillet steak) the customer usually has to pay a supplement of at least €3. That didn’t happen here.

It’s also extremely rare to get good fish dishes even on expensive menús because fish is always so much dearer than poultry and most meats. The restaurant’s overheads on a menú have to be worked out exactly, otherwise there’s no profit. The owners knew their costs here and were also well aware there was very little profit. That didn’t matter. This was their most generous way of saying to us: “Long time, no see. Welcome back!”

This €15.50 menú del día was remarkable in several ways, including one I haven’t mentioned until now: every dish was such a generous portion and was so carefully cooked that each one could have been an à la carte plate. You occasionally get one dish that could pass for à la carte — but never four in a single meal. The canelones were up to à la carte standard but at full price the serving would have been three, not two. But with a serving of three, you would pay €12. And the menú cost €15.50. Restaurant cooks are inclined to overcook fish (that’s how most people like it) but we asked for ours to be spot on — and that’s how we got it. We also wanted the fillet mignon to be truly rare — and that’s how they did it. The cooks were so much on the ball that everything about this menú was first class. I just had to give the whole meal a top-10 rating.

Restaurante Casa Gallega Avenidas, Avda Conde de Sallent 19, Palma. Tel: 971-948715. Open every day for lunch and dinner. This restaurant has been packed every day for lunch and dinner since the day it opened and reservations have alway been recommended for both sittings on any day of the week. Booking is now more essential than ever because with the 40 per cent reduced capacity law, those without a reservation won’t be able to wait while having a drink at the bar. So book — and make it easy for yourself.

A menú del día bill usually lists only the price, but this one also detailed the starters and mains: canelones, seafood paella, John Dory fish and chargrilled fillet steak. The €15.50 price includes dessert and, in our case, one caña each. We could have had a glass of wine. We had an extra caña at €2 so the total cost was €33. A low price for such a superb meal.

So when I saw on the blackboard ‘solomillo brasa’ I took it to mean a chargrilled pork fillet…you’d never get a fillet steak on a €15.50 menú del día, I thought. But when the waitress recited the menú del día dishes (post-virus rules mean no printed menu) I realised it was fillet steak they are serving, the cut the French call ‘filet mignon’.

A beef fillet, called a tenderloin, is broad at one end and slowly tapers off, coming to a flattish piece. The top two slices are called ‘chateaubriand’ and are more expensive. You then get the fillet steaks, round slices that are of diminishing width: the smaller the circumference, the thicker they are cut. Then comes the flattish ‘fillet mignon’. 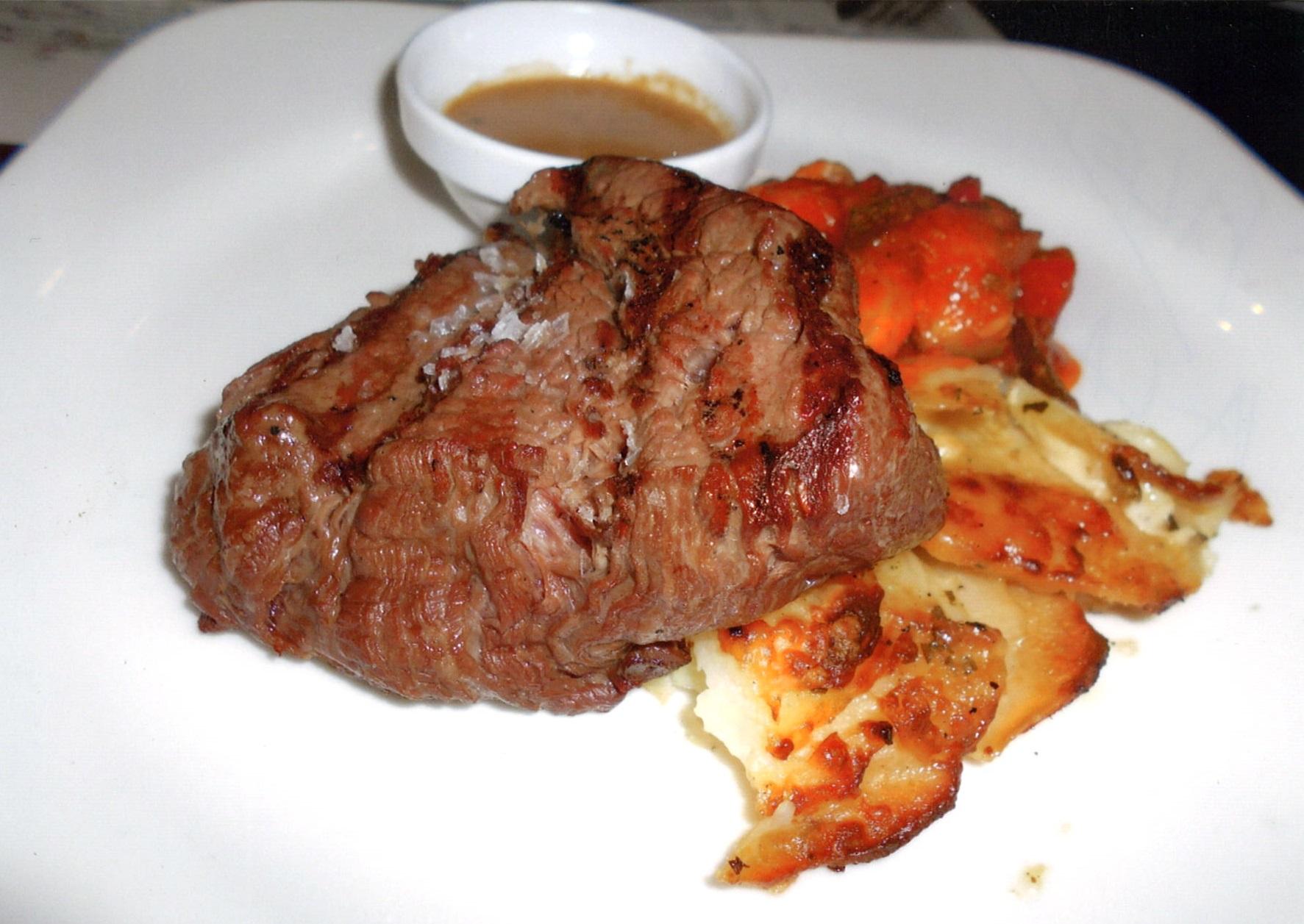 In French butchery the original ‘fillet mignon’ wasn’t part of the tenderloin, but was a very small muscle from inside the ribs and weighing about 125grs. It is seldom seen nowadays. The butchers probably keep it for themselves.

The French adore the flattish ‘filet mignon’ and, like them, we asked for it to be done ‘very rare’ — and that’s how the cooks did it. It was well-charred on the outside and the heat had penetrated leaving the ‘mignon’ truly underdone and incredibly juicy. This was a 10-rated piece of meat.

The canelones were elegant and exquisite. You seldom get them like this. The paella had just been made, was well studded with gambas and other seafood and was as good as you’ll ever get on a menú del día. The John Dory fillets, which we wanted ‘lightly fried’, were beautiful.

The restaurant neatly gets over the no printed menu rule — the paper place mat is the fullscale menu. You can consult it and at the end of the meal it is binned. The post-virus law has been obeyed.