These dishes were a big anti-climax

The potato and the ‘ajoarriero’ tortillas. | Andrew Valente

Some restaurants in Palma, especially new ones, make a very bad mistake: dishes that sound good on the menu don’t live up to their expectations when they come to the table on a plate.

It happened with every dish except one at this new place: they weren’t t all as they should have been. One, on the menu as a focaccia without gluten, was a complete travesty that was never going to fool anyone…and yet it was actually very good (see article next door).

This place specialises in tapas and we got the meal off to what should have been a sure-fire guaranteed start by ordering two tortillas: a traditional potato one and another called ‘ajoarriero’, meaning the filling contained a speciality from Navarra made with potatoes and bacalao (salt cod).

Both tortillas immediately caught my eye because I have never seen any with their smooth and very dry surface: they looked as if they had been baked in an oven instead of done in a frying pan…which is very far from being traditional.

The one called potato tortilla was moist, which is a good thing, but it didn’t have anything of the traditional Spanish tortilla texture and taste. And that’s a no-no.

The ‘ajoarriero’ contained little bits of fibre that could have been salt cod cooked to the nth degree. But there was no way of knowing because they didn’t taste of anything. And certainly not salt cod. That’s also a no-no.

One dish was extremely tasty: albóndigas con sepia, a well known recipe in which meatballs are cooked with cuttlefish. It’s a common one you find in many parts of Spain in which meat and fish or shellfish are cooked together.

The first taste of the sauce was most promising: packed with flavour and with a nice natural thickness — no flour was used. But from there the dish started to lose points, mainly because of overcooking.

The meatballs and the shellfish seem to have been done in a pressure cooker — I suppose to save time — and the meatballs were squishy soft. That’s also a no-no. Meatballs must have some texture. The cuttlefish was also too squidgy. But there was plenty of taste: I mopped up the last of the sauce with a piece of bread.

Some restaurants make life very difficult for themselves by announcing a well-known dish on the menu and then serving something quite different. Here it was a traditional potato tortilla that came with a slice of toasted pan de cristal rubbed with tomato. There was nothing traditional about it and it even looked and tasted as if it had been baked in the oven instead of done in a frying pan. If the cook thought an oven-baked tortilla was a good idea, he should have announced it on the menu. Even the vast majority of tourists nowadays know what a traditional potato tortilla should look and taste like. So dishes that deviate like this get off to a very bad start. The cañas were priced at €2.90 — a bit on the high side even for the Paseo Mallorca area. I know lots of people who are most reluctant to go to restaurants which charge as much as that for a caña.

Colmado Hispania, Paseo Mallorca 16, Palma. Tel:971-849314. Open every day for lunch and dinner. You can eat on the terrace and there are two indoor dining areas. There shouldn’t be any need to book except for a table on the terrace, especially at the weekend. 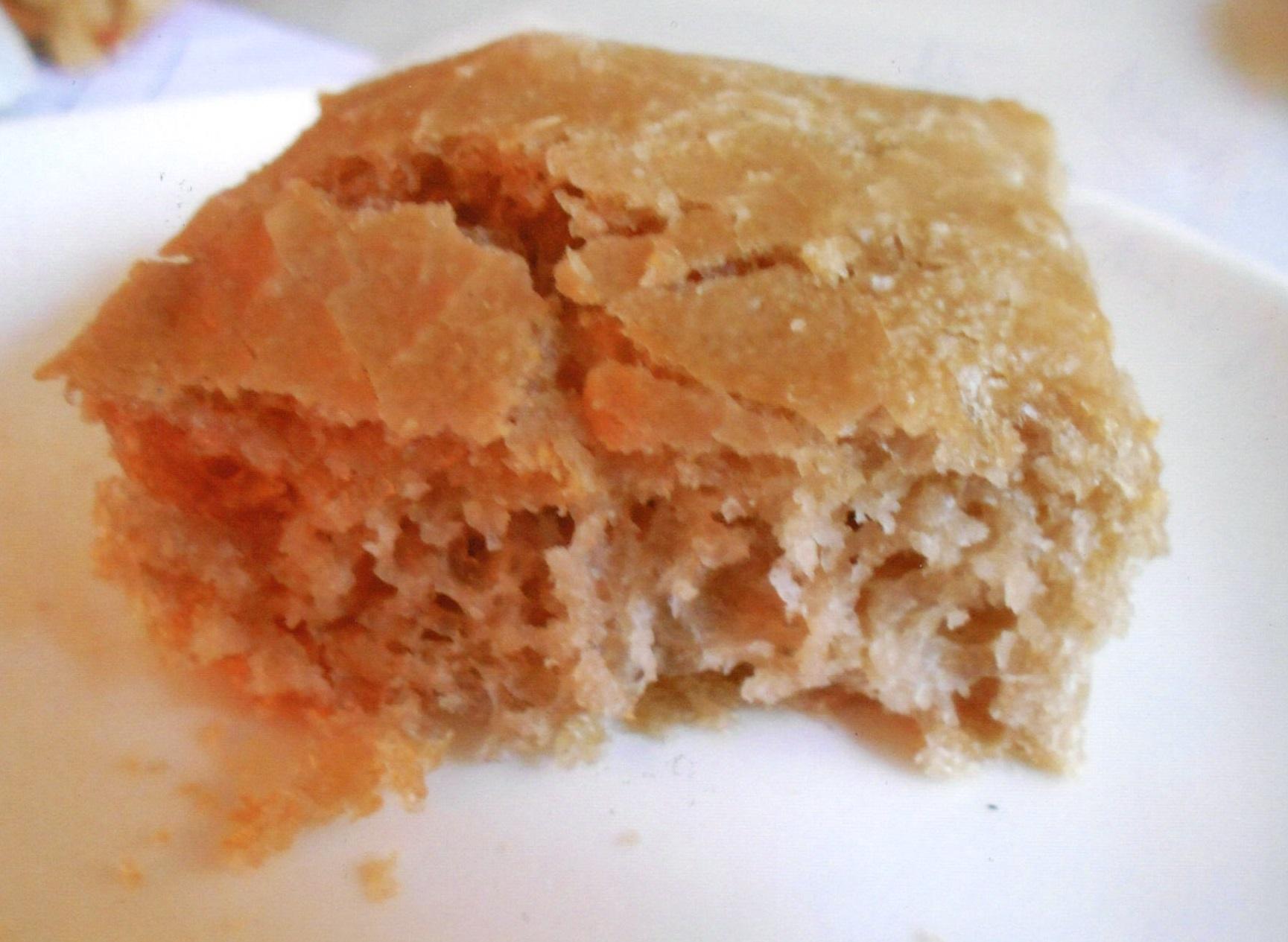 For a longish time now, restaurant cooks with few ideas have been abusing the names of famous dishes so that unsuspecting customers will order something they like the sound of — only to find they have been diddled and the dish is a culinary con.

Here’s one example I came across years ago. On the menu a dish was listed aubergine ravioli. I ordered it expecting Italian ravioli with an aubergine stuffing, which I had never come across before. What I got were two round slices of aubergine, sandwich style, with an anonymous filling and topped with a spoonful of tomato sauce. A culinary con.

On today’s menu they had focaccia without gluten. I’m not interested in foods without gluten, but I will always try a focaccia because I want to see what different cooks do with them.

This focaccia came to the table wrapped up in an anonymous brown paper envelope in which it had been baked in the oven. So it was obviously bought in, not made on the premises. Inside the envelope was a rectangular bread roll.

There is no definitive recipe for focaccia but it must be a bread dough, in just about any kind of shape, the surface scattered with some herbs, usually rosemary or thyme. This one didn’t have a single rosemary spike. It wasn’t a focaccia by any stretch of the imagination. As focaccias go, it was an utter travesty.

But that, fortunately, wasn’t the end of it. Incorrigible optimist that I am, I held my fire — and my ire. It could be, I thought, that this rectangular bread roll was a good example of its kind — that is, a roll made at a bakery on some gigantic industrial estate.

So I broke it in half and what I saw was what you can see in the picture above: a roll with a rough but light and spongy texture and a superb taste. You can eat it as it is, as if it were a cake. It was absolutely splendiferous. And it was worth a 10-rating.