The famous five vegetables of Spain’s summer cuisine are onions, tomatoes, peppers, aubergines and courgettes. They are so popular their fame has spread worldwide — and everywhere in the Mediterranean you keep coming across them in different dishes.

There is the ratatouille of southern France, a magnificent melange of onions, tomatoes, red peppers and aubergines, gently stewed in olive oil with garlic and lots of summer herbs.

The Sicilians have caponata which combines the above four veggies with other Mediterranean delights such as olives, capers and anchovies.

Then there is the renowned Basque dish known as pipérade on the French side and piperrada on the Spanish side — a mixture of red peppers, tomatoes and onions with eggs scrambled in at the end.

All over Spain there is a dish called pisto which combines the famous five in different ways, but always producing a succulent mixture that delights the eyes and the palate. In Murcia, equal amounts of ripe tomatoes, red and green peppers and aubergines are cooked in olive oil and flavoured with bay leaves. 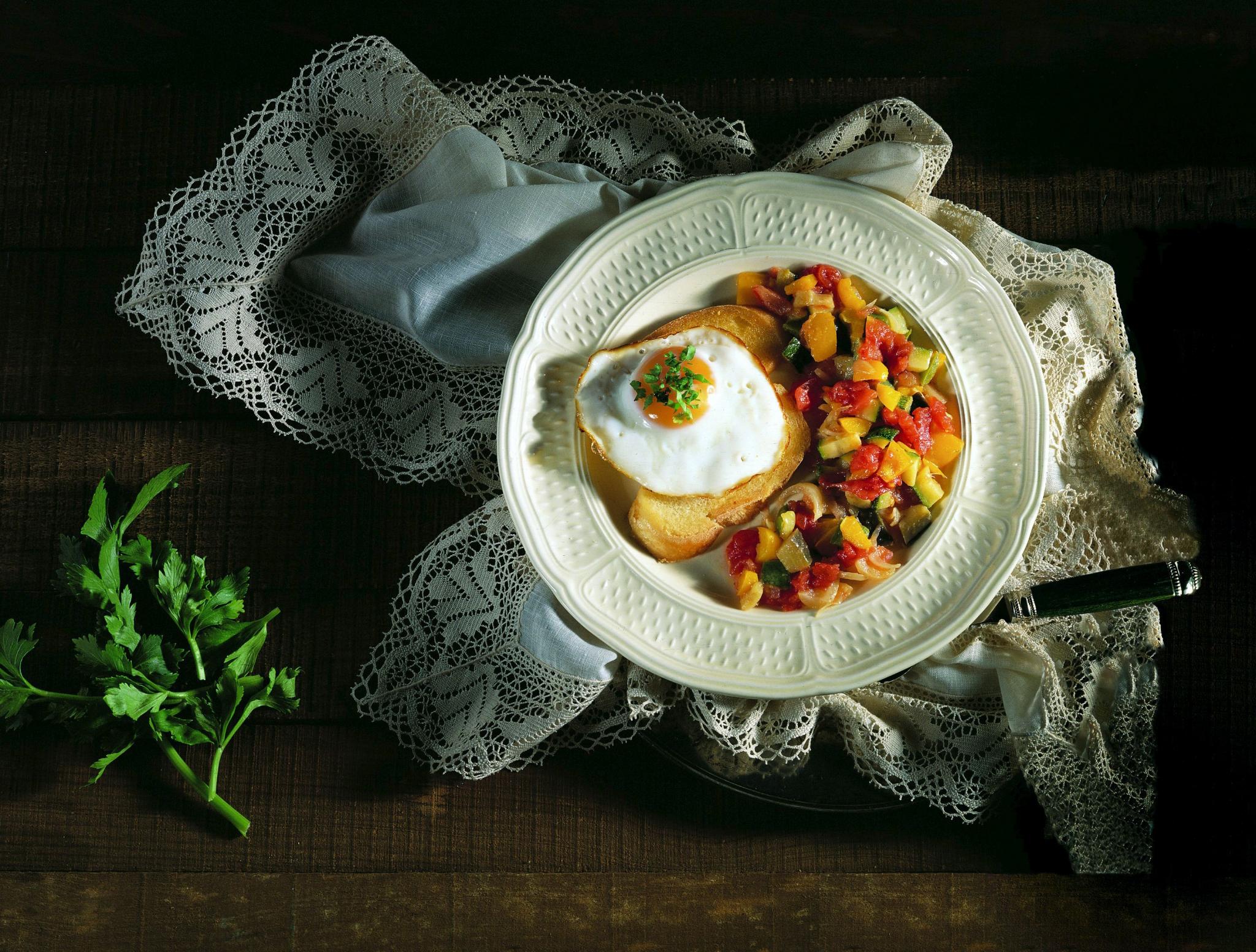 There is a pisto de Tafalla in Navarra that includes courgettes (calabacines), onions, tomatoes, green peppers and potatoes. A Basque version, called pisto a la bilbaina, combines courgettes, onions, red peppers, tomatoes and potatoes and finishes it off with beaten eggs scrambled into the mixture. As the Basques have big appetites, this version comes with slices of fried bread.

The Asturians use the famous five minus the onions and slice everything in medium sized pieces and flavour them with garlic and parsley. The Cantabrians leave out the aubergines but include beaten eggs like the Basques and also serve it with bread — but toasted rather than fried.

The people of Madrid use the same recipe as those in Cantabria, including the scrambled egg finish — but they don’t do fried or toasted bread.

One of the most famous versions of this dish is in Castilla and is called pisto manchego. Aubergines are not included and it is flavoured with nothing but olive oil and garlic. In Aragón they use the same ingredients as in pisto manchego and shun all flavourings except for a hefty amount of chopped garlic.

Nearer to Majorca there’s the samfaina of Catalonia which uses tomatoes, red peppers and aubergines. However, this dish differs from most of the others in that it is cooked with main dish ingredients such as salt cod or chicken.

The other variations can be served with meat but more often than not they come on their own as a starter. The samfaina is the only dish I know of in which meat or fish is cooked with the other ingredients. This, of course, gives it a much richer taste.

Then there is Majorca’s great contribution to the theme — tumbet, a melting concoction of tomatoes, red peppers, aubergines and potatoes. It is one of the most popular summer dishes on the island. All of these dishes have one thing in common: they are cooked in olive oil and can be served cold during the hot weather. 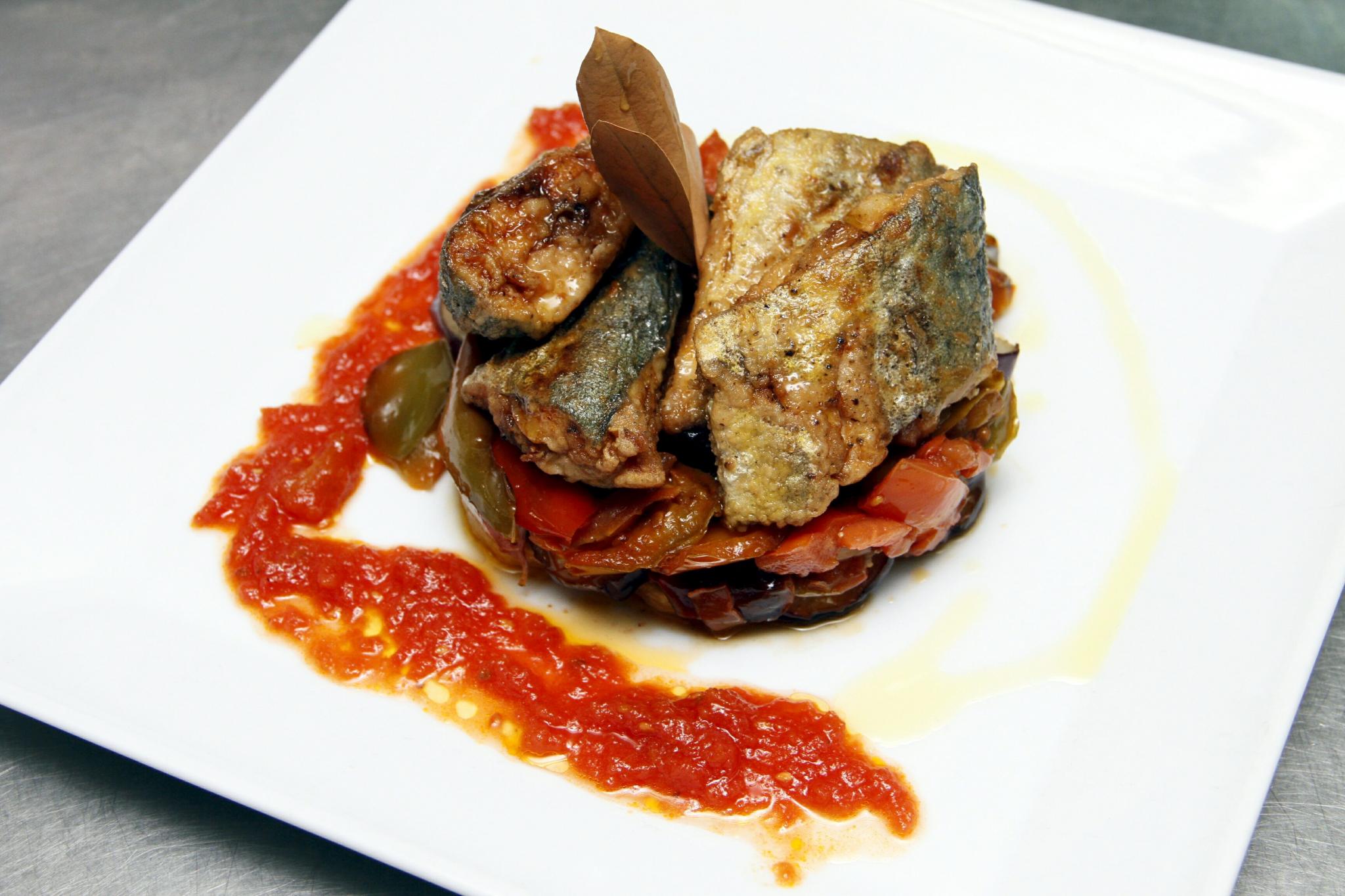 Another feature they share is that they are better made in advance and allowed to rest so the flavours can mature and mingle. This means they can be cooked in the cooler part of the day and left in the fridge until needed. But never serve them straight from the fridge — take them out an hour or more ahead of time so they are near to room temperature.

At this time of year red peppers are at their best and we should make the most of them. One of the best ways to eat them is roasted and then turned into a salad. Red peppers can be roasted over a naked gas flame (not too high, not too low) or over charcoal. When the skins are burnt black, wrap them in sheets of newspaper for 10 minutes and they will peel easily.

You can also do them in the oven under an electric or gas grill until they are black all over. This is a cleaner way of doing it, but the gas flame gives a smokier flavour. Roasting them over charcoal is best of all.

You make them into a salad by discarding the seeds and inner membrane, slicing them into very thin strips and dressing them with virgen extra olive oil and finely chopped garlic to taste. No vinegar or lemon juice and use a generous amount of olive oil.

The idea is to make a dish of creamy scrambled eggs that amalgamate with the other ingredients. As this is basically a way of using seasonal red peppers, the taste of the peppers should be very much to the fore. For six people you will need: 1 kilo of peeled ripe tomatoes finely chopped, 3 large red peppers roasted and cut into shortish thin strips, 2 finely chopped large onions, 8 XL eggs, 3 garlic cloves (or to taste), three sprigs fresh thyme, a bay leaf and virgen extra olive oil.

Sauté the chopped onions in a big frying pan until they are of a light golden colour. They must not brown. Add the finely chopped garlic and the red pepper strips. Sauté gently for 10 minutes and then add the chopped tomatoes, the bay leaf and the thyme. Cover, and cook for another 15 minutes.

When the mixture is thick and of a jam-like consistency, pour in the lightly beaten eggs and cook them exactly as you would for creamy scrambled eggs. This must be done over a very low heat so the eggs do not suddenly become overcooked. Stir frequently but gently and take the mixture off the heat while the eggs are still slightly runny.

In both parts of the Basque Country a piperrada is frequently served with slices of fried cured ham. As this ham is extremely salty, it’s a good idea to drop the slices into a pan of boiling water to get rid of some of the excess salt.

Take them out after three minutes or so, drain them well and sauté them in a frying pan with a little olive oil. You could also use the British style Canadian cut bacon sold at Mercadona.

The piperrada is also served with fried eggs on top but the scrambled eggs version is the more popular. The Basques also use the piperrada as an omelette filling — done flat in the Spanish style or folded over as in a French omelette.