The skewered meats and those incredible Belgian chips. | Andrew Valente

At a Moroccan restaurant I expect to find lovely cous-cous dishes, vegetable and meat stews perfumed with the warm spices of North Africa — and that line was available at Muaré. But I would never have expected to eat the best chips of my life — yet that is exactly what happened.

There was nothing fortuitous about this. Those chips were fried by a Belgian of Moroccan-Berber descent — and Belgians make the best chips in the world. I once visited Belgian friends for three weeks and lunch every day was mussels and chips — as well as chips with dinner.

Never have I eaten chips as exquisite as those at Muaré. They came as an option with brochettes of chicken, kefta and merguez sausages. The cook, who took our order and seems to be at least part-owner, uses a Belgian variety of potato but he also understands the chemistry of frying chips — which was why these chips were absolutely immaculate. There wasn’t a smidgen of oil on them and it was amazing to think they were deep-fried.

So the best-ever chips received an immediate 10-rating — and also a gold medal big enough to anchor an aircraft carrier of the US Sixth Fleet in the Bay of Palma.

The Muaré menu has some 50 dishes, not counting desserts, and making a choice wasn’t easy. We decided to go for chicken, kefta and merguez sausage brochettes (two of each) with hummus, tabbouleh and grilled vegetables, plus the Belgian chips or Lebanese rice.

The chicken chunks were juicy, the kefta (minced meat shaped into thick cylindrical shapes) had a lovely texture and delish gentle and hottish spicy flavours. The merguez sausages also scored for texture but were less spicy than others I’ve eaten. The hummus had the correct smoothness but lacked the rich taste I am used to. The tabbouleh had the right mix of greens with plenty of parsley but a touch of mint and the tartish sting of lemon juice were missing.

An important point to bear in mind. Muaré doesn’t sell alcohol but customers can bring their own wine, for which there is a €5 corkage charge per bottle. If we take a €6 wine (which would normally cost around €18 in a restaurant) we’ll be spending only €11. And if we take a €13 wine (for which a restaurant would charge around €35)) then our total price would be €18 — what we normally pay for the cheapest wine on a restaurant’s list. Most restaurants these days charge three times the shop price for wine. We didn’t know about the bring-your-own-bottle policy, which is why we have two mineral waters on our bill.

They should have a rethink about the presentation of the brochettes. There are two really bad mistakes here. They use skewers that are much too long for what they are holding. I suppose the idea was to make a dramatic effect, but what happens is that the six long skewers just get in the way. The other error is that when the dish arrives the grilled veggies cover the skewers: all you can see is a tiny piece of sausage and kefta…and a huge mound of grilled vegetables. But this dish is about the grilled meat, not the veggies. The visual impact would gain immensely with smaller skewers that are totally visible and the veggies on a separate dish. And the eating of the brochettes would be much less of a hassle. We can see the skewered meats in the picture only because I transferred most of the vegetables to a small plate. They really should think about doing that in the kitchen.

Cantina Mediterránea Muaré, Calle Barceló i Combis 4, Palma. This street is off the Plaza Las Columnas, which you get to by walking along Calle Nuredduna, which is off Avda Alejandro Rosselló at the Banca March building. Tel:971-127572. Open every day for lunch from Monday to Saturday and also for dinner on Thursdays, Fridays and Saturdays. Cous-cous is served for lunch and dinner on those three days. They do a €14.90 dish of the day from Monday to Wednesday at midday consisting of a chicken, kefta or merguez brochette, three pieces of falafel, salads, Belgian style chips or Lebanese rice, dessert and drink. They also do a catering, delivery and takeaway service.

The mixed drill cost €24.90 (and could easily have served four for a light lunch with a shared starter and dessert) and two San Pellegrino sparkling mineral waters were priced at €6, so the total cost with VAT was €30.90. 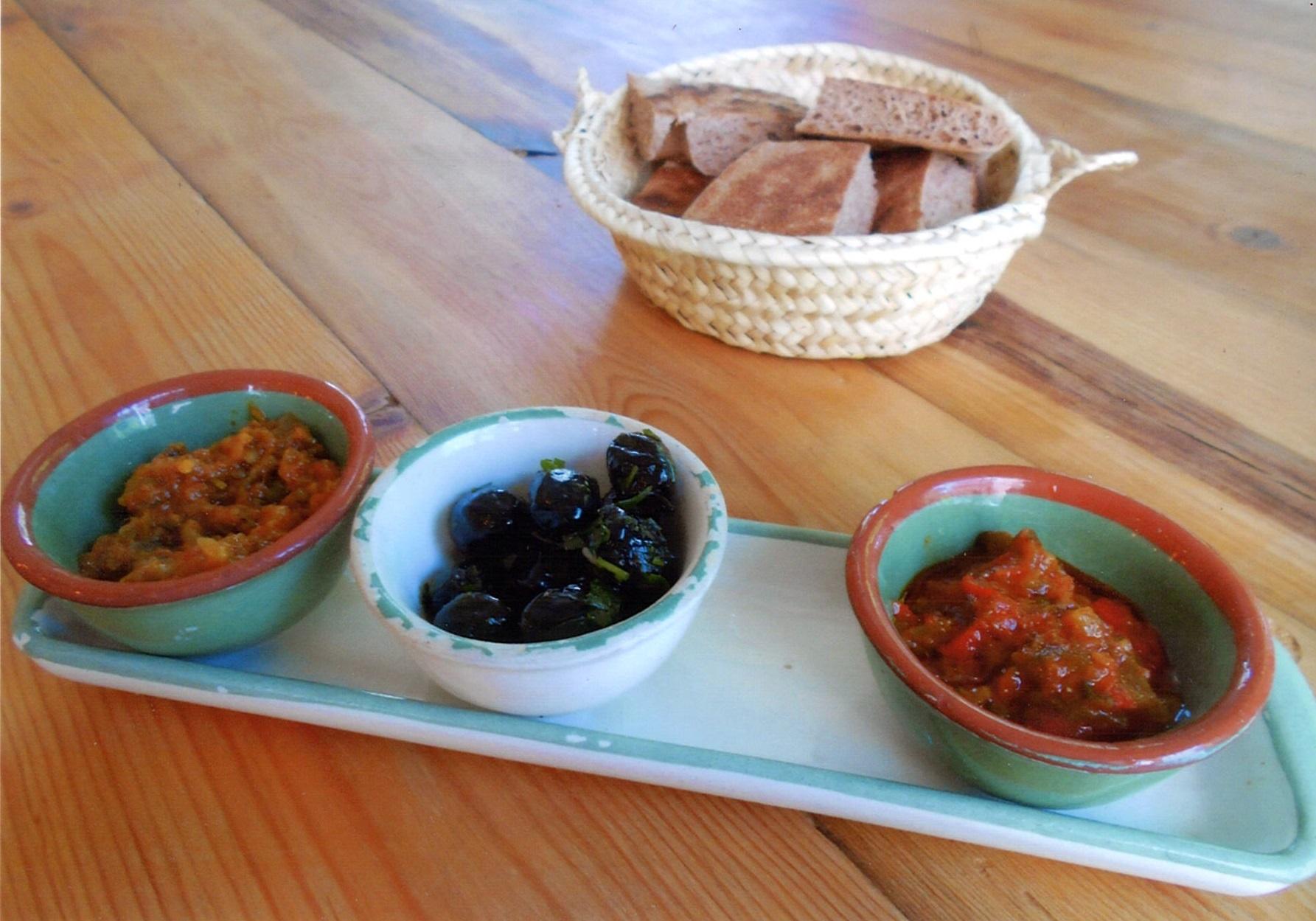 In Majorcan restaurants in the old days, bread was always free of charge whether you were eating à la carte or a fixed price menu. Some places, especially those specialising in Majorcan cooking, also served a dish of olives or a bowl of alioli — and sometimes both.

At that time, around the mid-1960s, restaurants also served what was called a tourist menu — a fixed-price bill of fare that included a starter, mains, dessert, bread and glass of wine or beer. The price was fixed by the Madrid Tourism Ministry.

When the restaurant trade asked for an increase in the price of the tourist menu, the ministry refused, saying it could damage the then surging influx of tourists. But as a compensation, restaurants were allowed to charge for bread.

The tourist menu soon afterwards became the menú del día and some restaurants immediately started to charge for the bread, although many didn’t. There are a few rules here: the price of bread and olives has to be on the menu, and the waiter has to ask clients if they want bread. The price of a menú del día always includes bread and a drink of some kind. Most restaurants include a glass of wine, beer or water. For some, a beer is an extra and they charge for it.

Some places would include an elaborate tapa with the bread but nowadays just about everyone charges for the bread and olives and they put them on the table without asking if you want them. This little item is now an important part of their daily takings.

But that doesn’t happen at Muaré. The waitress brought a basket with chunks of their own Moroccan brown flat bread, plus three little bowls: one with the most magnificent black panssides olives, an aubergine-tomatoes mix and a different kind of chopped veggies.

The bread was beautifully soft and spongy and both of the veggies impeccably flavoured with warm North African spices such as cumin and coriander. It was the most fantastic freebie I’ve ever had…and worth a 10.