Barry Byrne, a Human of Mallorca and the air we breathe

My Human of Majorca this week is Barry Byrne. A Soller resident of some 15 years after a previous life in Madrid. Originally from Dublin, he left after University to settle in the magic of Spain’s Capital City. Life brought him to Soller where he lives, works and gets involved. Fluency helps him to be one of voices for the English speakers of the Soller Valley. He sorts problems, raises issues and makes us all think.

For instance, what to do with this slice of information:
‘We can live three weeks without food, three days without water – but only three minutes without air. Every day we breathe in between 11,000 and 15,000 litres of air yet, by and large, most of us are less concerned about the quality of our air than, say, our food and water. We take our air for granted– it’s always there. And the hazardous contaminants, such as fine particulate matter, are invisible. Making things worse is the fact that we rarely have real-time data on our exposure to polluted air.’

This line of thought led to the birth of Sóller per l’Aire. They started to engage the community and encourage all to fight to protect public health, to measure and improve air quality at a hyper local level – neighbourhood by neighbourhood – plus help in the fight against climate change.

Air pollution has a range of human causes: cars and vehicles. In Soller we almost have as many vehicles as inhabitants. The burning of pruning’s and farm waste at certain times of day thanks to our dramatic and unique topography. The emissions from our wood-burning stoves. These are all contributing to our daily air quality.

Soller lies at the bottom of a bowl-shaped valley and air pollution can become trapped in the valley due to a meteorological phenomenon known as temperature inversion, in which a layer of cool air at the surface is overlain by a layer of warmer air.

Air pollution is harmful to human health, and its impacts — increased hospital visits, missed work and school days — are frequent reminders that its risks are real and personal. Moreover, these risks are highest for some of the most vulnerable populations: children, the elderly, and people with already compromised respiratory systems.

Global air pollution is now the biggest environmental risk of early death, responsible for as many as seven million premature deaths each year. That’s more than AIDS, tuberculosis, and malaria combined. And recent studies have uncovered that air pollution can impact mental health, lung development and the economy. In a town like Soller, air pollution may well be responsible for around ten deaths per year. If ten people were to die annually in Soller from contaminated water, the town’s reputation world be in tatters.

In short, we all share the blame and we all share the consequences. And we must, therefore, share a commitment to informing ourselves and to protecting the vulnerable.
We believe clean, safe air is a right and we believe that informed citizens are key to guaranteeing that right.

But the notion that we have a right to clean air depends on the availability of accurate air quality data. Because air pollution is hard to see, it’s often hard for us to grasp the scale of the problem or to pinpoint sources and trends to develop effective solutions. New sensor technology is changing that dynamic, allowing us to measure and map pollution concentrations street by street across our community and identify patterns and hotspots like never before.’

Barry and his team of air quality assessors have been testing the air, with machines, in Soller every day from the beginning of October 2020. Within days it was obvious that for two hours a day, in certain weather conditions, the smoke is held in the Valley and makes dangerous readings. The rest of the day we have near perfect air quality. 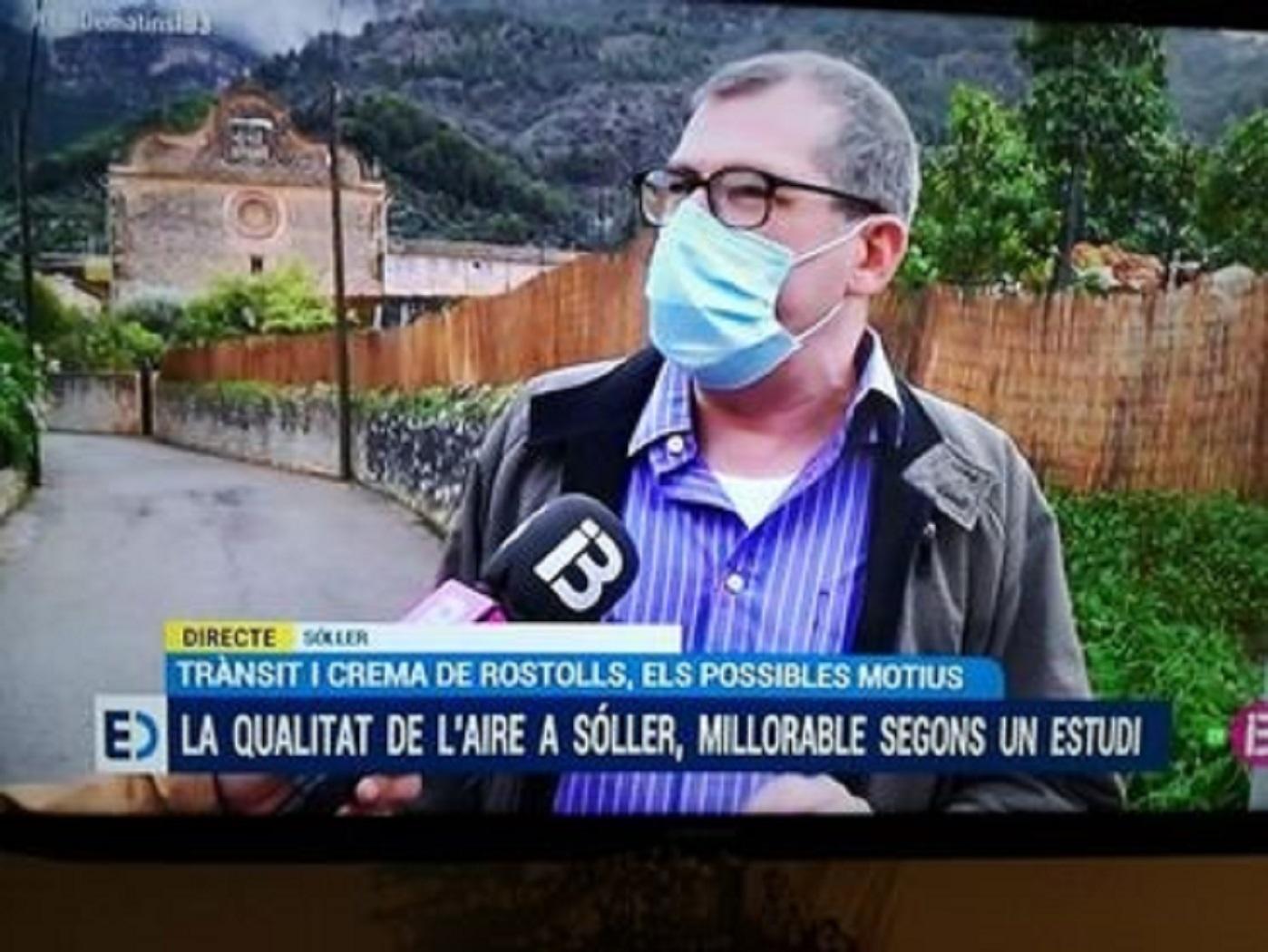 Local and national newspapers want the story and now the TV cameras have been in the Soller Valley talking to Barry and our important people from the Town Hall. An announcement has just been made by the Mayor to say The Town Hall of Soller will undertake a full study of the morning air pollution in the Valley. This will be followed by a plan of how to deal with it.

This is a fantastic result for the agitators of Soller who just wanted their voices heard. Barry Byrne should be feeling very proud of himself right now. We are certainly delighted that when the chips are stacked against us he will jump in the middle and create a dialogue of reasoned thinking. A Human of Majorca who arrived among us and set to work, we are all glad to know him.