On the road with Florry the Lorry

She has an onboard shower and composting loo

If you don’t know what a “digital nomad” is then where have you been? It’s a new type of lifestyle made possible by remoting working and decent wifi connections.

These days, if you have a job where you work with IT, sales, management and so many more professions, then it is possible to be doing your job from anywhere in the world via your laptop. We already know of people living in Mallorca who are doing that.

In fact ex-president Bauza is championing this for the island, with the idea to make it a kind of suburb for Europe’s big cities where professionals and business owners can base themselves, work remotely and enjoy the Mediterranean lifestyle.

But what if that is not enough for you? What if not only you want to be able to work remotely, but you want to travel constantly as well? That is the true digital nomad, and if you live in a lorry, called Florry, then even better!

I went along to meet Catherine (Cat) and Chris who live in Florry along with their chocolate labrador Rolo.

Cat and Chris were visiting Mallorca for a couple of weeks after having been in Menorca for the winter, and I caught up with them on some private land in the East of the island.

From an Edwardian house in London to a 7.5 tonne lorry took some doing: commitment to an idea which took two years to become a reality.

Why did they make the change? “We were maintaining this big house and working all hours and thought why are we doing this?”, Cat explained “The kids are independent and our parents are healthy, this is the time to travel whilst no one needs us.

We are free to do what we want to do”. Chris and Cat had been travelling on and off in motorhomes for over 10 years.

They had often talked about doing a longer trip, or even possibly changing their lives completely and living full time in a motorhome. “But a motorhome was just too flimsy in my opinion and too expensive to maintain”, said Chris. 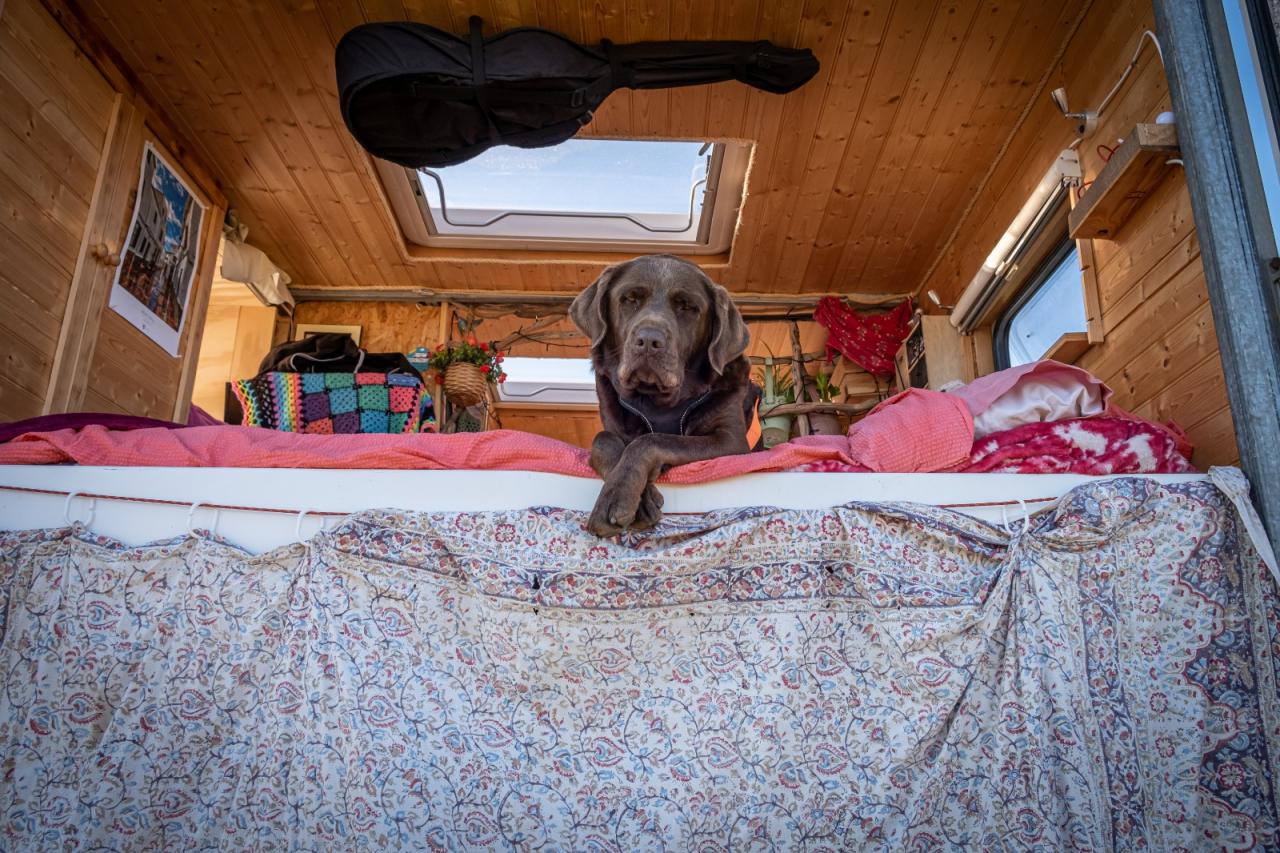 Then came a diving holiday in Menorca where they discovered that one of their dive instructors was living full time in a Mercedes lorry. “We went for beers in the lorry and realised that it could be a possibility”, said Chris.

It took him a couple of months to convince Cat that they should do it and that he had the skills to do the conversion himself, “I thought, I can put up a shelf, how hard can it be?” Quite hard as it turned out. 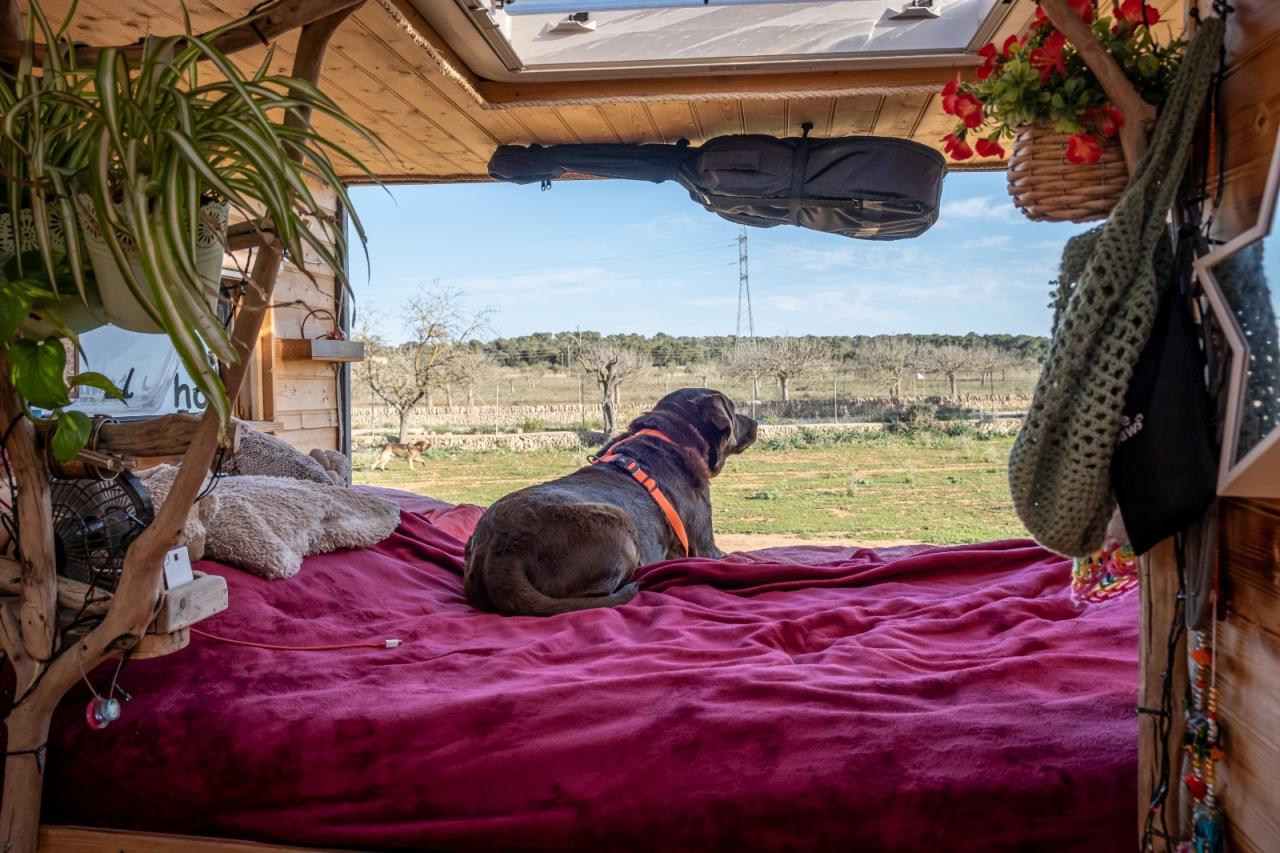 After they had taken the decision to buy Florry and convert her from a delivery truck to a home, the couple went through several months of deciding on the interior design, the toilet moved four times before they decided where it should be.

Florry herself is probably bigger than some holiday flats you might stay in, as she is 32ft x 8ft inside, with a fully fitted kitchen! 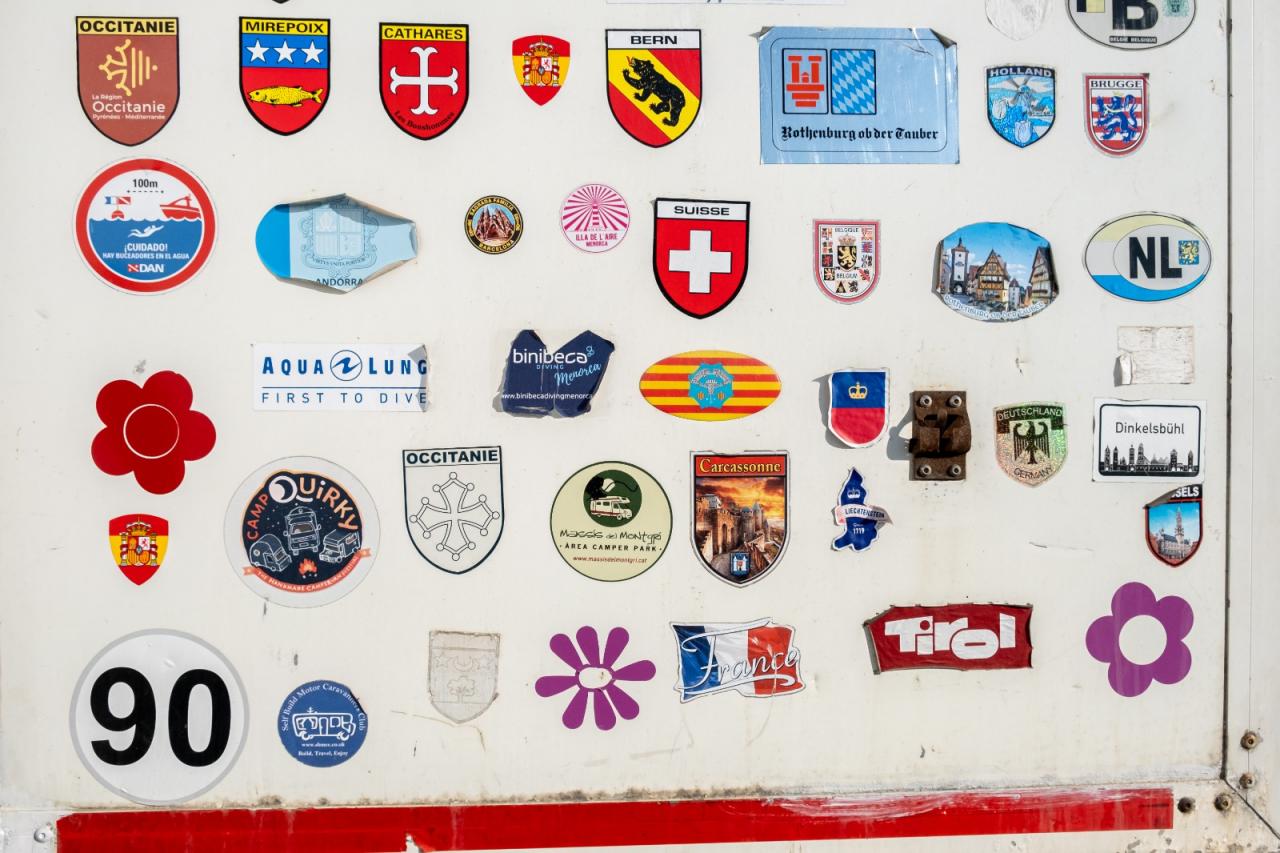 She has an onboard shower and composting loo. Eventually, they were ready to rock and in May 2019 Cat, Chris, Rolo and Florry left the UK for the first time.

So far they have travelled around Europe, and have spent the past months in Menorca.

How has van life been so far? How do you maintain peace and harmony in a relationship when you are living in a van?

They both laugh as I ask this and Cat answers, “If we have an argument or something, okay, I tend to go up on the bed at the back of the van, It feels psychologically as if it’s a separate space for me. 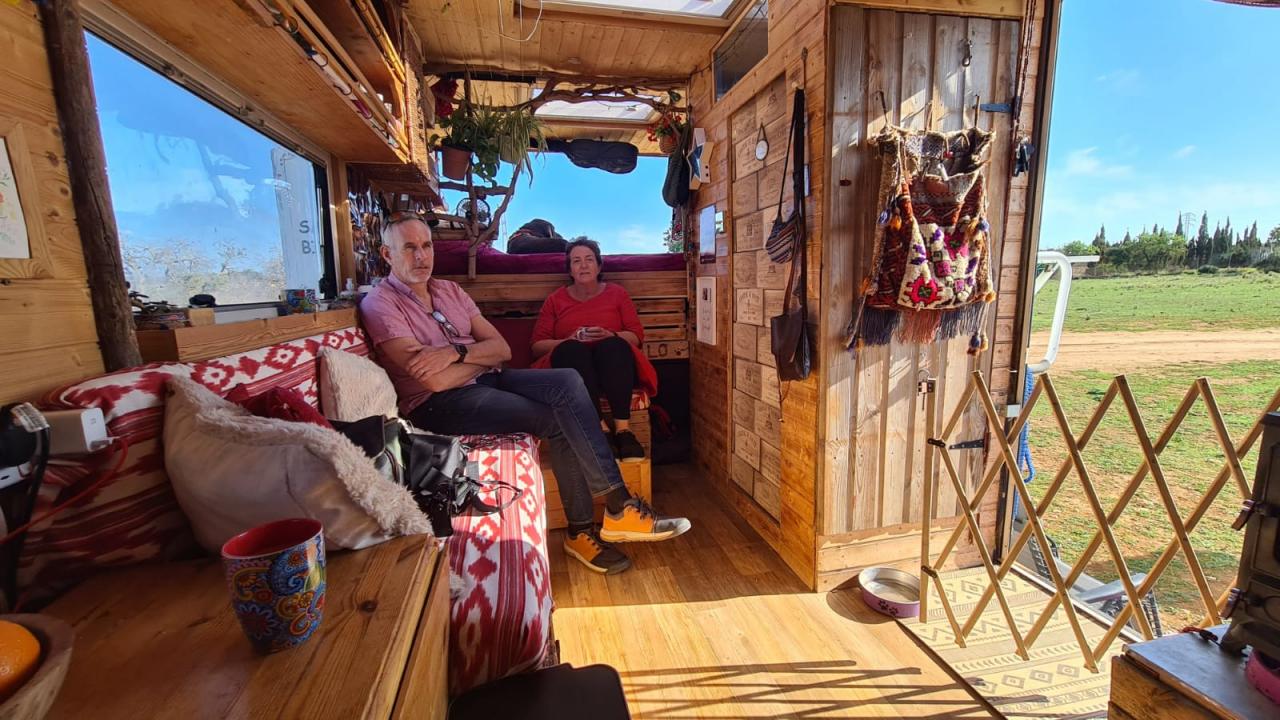 But also we travel with a car which gives me some independence and space”. I suppose, I say, that you at least have an advantage over a boat, you can go for a walk! “For example, we had an argument early on in a trip and I stormed out.

And then I was standing in the rain, thinking well, what am I gonna do now then? So after about ten minutes I thought, well we’d better sort this out otherwise this isn’t going to work! You can’t run away for too long. You have to come back and fix it”.

Talking of fixing things, if your vehicle breaks down you can become temporarily homeless as Cat and Chris realised when Florry had to be towed away for repairs. “I realised that we didn’t have anywhere to stay!

Our entire lives are in the van, so when she was taken to a garage to be fixed we had to have a back up plan. Now we have a “BUGOUT” bag for emergencies, with things in it that we would need if we couldn’t stay with her”.

How have the couple found staying in Mallorca? They told me that there were not many opportunities for camping or parking a motorhome on the island and that they had struggled to find safe and welcoming places to stay.

This is a shame as perhaps more people would like to come to the island and explore it. If the UK is anything to go by there has been a big increase in the amount of van conversions in the past couple of years, and there are more and more couples like Cat and Chris who are aiming to travel.

Chris still works Monday to Friday for a business based in the UK as developing operating systems. He works from a desk in Florry and Cat often takes Rolo and they go off to discover a new area of wherever they are staying. How has it been working on the road?

“I’ve worked for a number of companies over the years and it has taken some time to get to the point where I can work from home, or wherever I am. They had the “bums on seats’’ mentality, where if you’re not there sitting at your desk at nine o’clock then you’re not working.

I’d ask to work from home on Fridays so that I could be there for my children and the response would be “Oh, well, we’re not really sure about that”. It’s like, do you just think I’m gonna sit there watching Netflix?

I mean, come on, I’m gonna do my job. In fact, I feel when you are allowed to work from home, you actually work harder to prove you can do it because you want to keep doing it.”

As our lifestyles evolve, and the workplace continues to change, maybe more of us will be living and moving around.

It certainly appeals to me: the romance of living like a gypsy, wandering around the world, but there is a lot more to it than meets the eye!

If you’d like to hear more about the reality of living in a lorry then listen to the interview I did with Cat and Chris on Majorca Mallorca podcast www.majorcamallorca.buzzsprout.com where they explain exactly what it is like to live in a driveway and what it feels like when your home is towed away! You can follow their adventures at www.facebook.com/florrythelorry and @florrythelorry on Instagram or visit www.florrythelorry.com

In Reply to Jonas's Comment: We were Legally in Spain, I don't need to elaborate on that anymore. In the UK they place height barriers, paid parking, thus preventing motorhomes from visiting. In France, they will make a "Aire" especially for motorhomes to come so they can visit and do not take up places for cars. You do not see these complaints from the French, who foster this type of holiday-making and, indeed, welcome it. With regards to your other comments "dozens of vehicles parking where they want " - Have you ever been to a car-park and found some big SUV taking up all the space? Or someone across 2-spaces, or even on the street parked badly? Why are you singling out Motorhomes for this, they are no different to any other vehicle. For your peace-of-mind - we only every park legally, if we are unsure we ask (as we did in Port d'Andratx and the Port Authority were lovely about it and said where we could park). When we visited the mountains we decided that Driving a 7.5ton vehicle around and trying to find parking was too difficult and we spent the remainder of our stay in a camp-site paying to stop there. "contributing almost nothing to the local economy" We bought food, shopping, fuel, we had coffee's out, we paid for parking. I would suggest we spend more and contribute more to the local economy that a tourist who goes to an all-inclusive hotel where the money is not fed back into the local economy but lines a big corporations pockets. FlorryTheLorry

Jonas | about 1 year ago

Bit baffled how they can be here in there presumably a uk vehicle which can’t be matriculated onto Spanish plates,are they resident here?presumably been here for several months according to your report.the last thing Mallorca needs is dozens of vehicles parking where they want and contributing almost nothing to the local economy.