TO have a grandchild, car, music and a destination is just a perfect recipe for a glorious day out. If the sun shines too then we are double blessed. Mimi, my middle granddaughter was my companion as we pointed the car in the direction of Esporles. 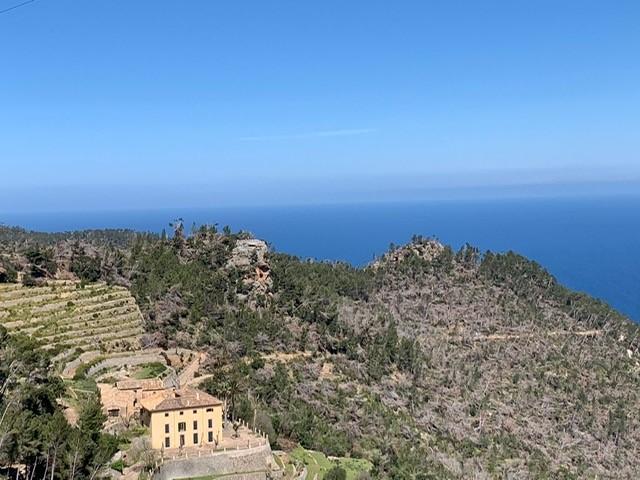 The back lanes were beautiful with spring flowers and the arrival of wisteria and blossom. The verges are now full of bright red poppies and resonant of the Easter season in Mallorca.

Coffee break at Esporles and a ‘bump into’ Soller friends doing the same route on their bikes. The Soller Valley is a very small world and the jungle drums beat fast and furious. I am glad that we were not up to ‘no good’ as it all would have been reported back.

We had a couple of destinations in mind and started with the drive to Sa Granja which is easily signposted through Esporles. This is a great day out to relive the Mallorcan past in a ‘living museum’ sort of way. It is currently not open to the public so we used their great car park instead.

We were parked on the road where the GR221 crosses. This is the dry stone route which zig zags our mountains of the Tramuntana. At this point it is known as the ‘Old Postman’s Route’ because in years gone by deliveries were made to houses along the paths into the fine woods which line this route. Great views all along here of the terraced landscape, natural springs, woodland and sea views.

From there we left civilisation and began the climbs which looked down on to the glorious vista of the terraces sloping down towards the sea into the distance. From the very top we could see Palma and the Cathedral in all its majesty. By all that’s right that shouldn’t have been possible. It is just so true that ‘on a clear day you can see for ever’ from certain places in Mallorca. 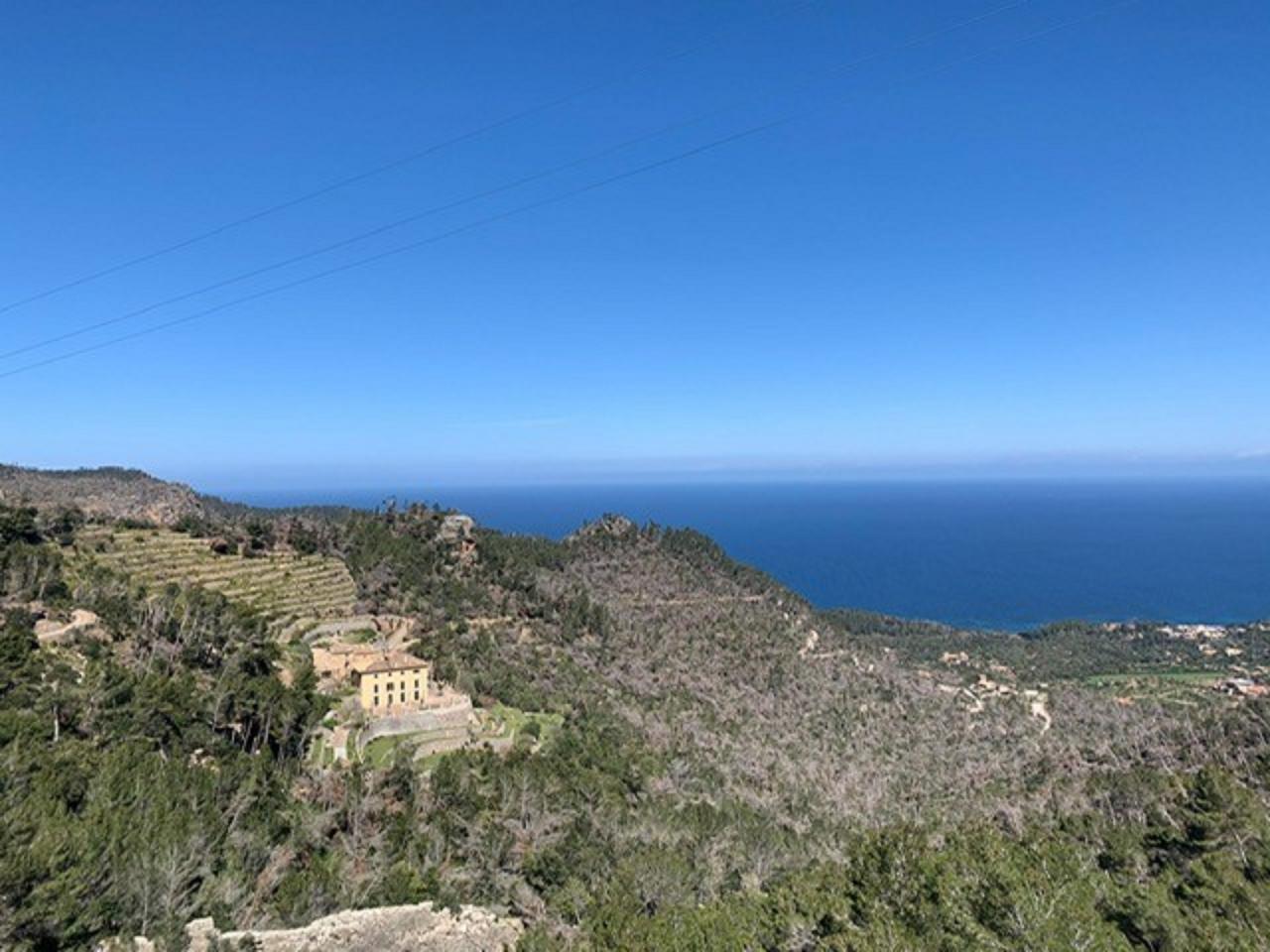 Amy Winehouse accompanied us on the next part of the route as did families of goats spilling out onto the roads. The empty roads and the terraced mountains opening in front of us were wonderful and then we came to Sir Richard Branson’s vision.

We were on the road above the vast Son Bunyola estate. The works going on there are vast including the deforestation of acres of dead trees. I am sure new trees will be planted but right now it looks like a sad glimpse into a future we wouldn’t want to be part of.

Chopping down acres of trees has been a feature of the Mediterranean for generations. It was the trees which had to go first for the terracing of the mountain and the planting of olive trees, figs and vines to happen. This whole Son Bunyola estate is best described as ‘work in progress’.

We arrived at squeaky clean, pristine Banyalbufar. The land surrounding the village was developed by the Moors and divided by dry stone walls. This area was terraced and grapes were grown almost to sea level. 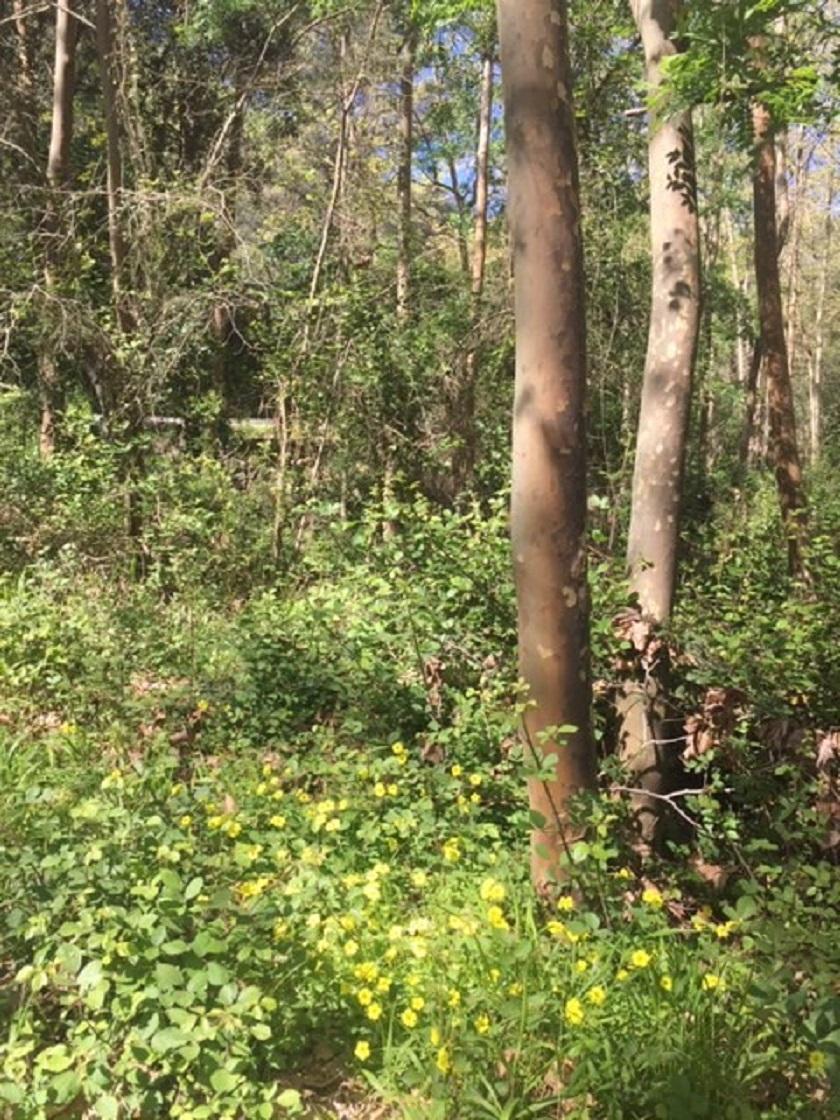 The sweet wine Malvasia was the product of the area until a virus arrived in 1891 and destroyed all grape production. The terraces are now used for vegetable and market garden produce. Some of it is being worked to establish the Malvasia vineyards once again.

Our visit this week saw few people but once it opens again the artistic second home owners will be back. The word on the street is that this is Mallorca’s next Deia. Maybe the Branson name has something to do with that.

We left the beauties of Banyalbufar in search of lunch and reversed our route until we could take the turning off for Valldemossa and Deia. This is the sea route and brings you to the start of the Valldemossa to Port of Soller coastal route.

This area is Mallorca’s Amalfi coast road equivalent. Some, like me, would say it is even better than the winding Italian road past Positano. Lunch awaited us in Deia and it was a great experience. The traditions of Mallorca on our plate in the shape of Lomo can Coll. Don’t turn your nose up at Pork and cabbage, it was delicious.

We swept back into our valley as the only car on the road. We congratulated ourselves and thanked the travel angels for a safe journey, up and down mountains and along winding sea roads.

A magnificent Nan’s Day Out and one for the memory box of our family.