Learn how to make an authentic Spanish sofrito! Do you want to find out more about Spanish food and cuisine? Have a look at www.foodsfromspain.com #Cooking #Training #Chef #SpanishFood #FoodsFromSpain #Sofrito #OliveOil #SpanishOliveOil | Youtube: Foods & Wines From Spain

A book on Spanish cooking, written in English, calls a sofrito “fried tomato”, makes it with ‘one small onion” and a kilo of tomatoes, plus one clove of garlic and an optional green pepper and 50 grs of ham, and at one point refers to it as a sauce. The recipe also says “the tomatoes need to cook only about 12 minutes”.

The Spanish sofrito is a great deal more than any of these words can convey. It is an almost magical culinary potion that is unique to Spanish regional cooking and it is one of the main reasons why those traditional homemade dishes we are served as part of a Mallorcan restaurant’s menú del día have such a splendid taste.

In many other cuisines (French and Italian immediately come to mind) recipes are often started off with fish or meat being sautéed in chopped onions and tomatoes. But only in Spain has this essential first step been raised to a gastronomic art that gives so many dishes their characteristic essence. 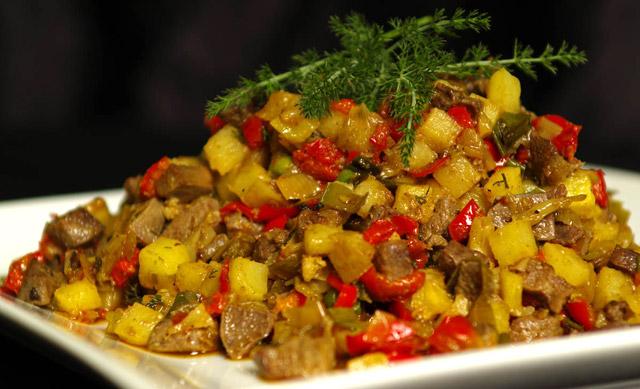 As the sofrito is the foundation on which so many Spanish regional dishes are built, it must be done with great care and several simple rules must be followed. Perhaps the most crucial one is that a good sofrito cannot be rushed.

A sofrito in which the onions are cooked quickly will be a failure, and so will the dish you are making. If the tomatoes aren’t cooked for long enough the sofrito will also be unsatisfactory. The book that said “the tomatoes need to cook only about 12 minutes” was well and truly off beam.

For certain dishes, some meticulous Mallorcan cooks of the old school allow 45 minutes for the making of a sofrito. This may seem like an awful long time for a simple operation such as cooking onions and tomatoes, but in the end if makes an enormous difference.
The aim of this slow-cooking method is to reduce the chopped onions and tomatoes to a thick jam-like consistency. It’s this soft highly flavoursome mixture that ensures a dish will taste very special and will have the right silky texture. 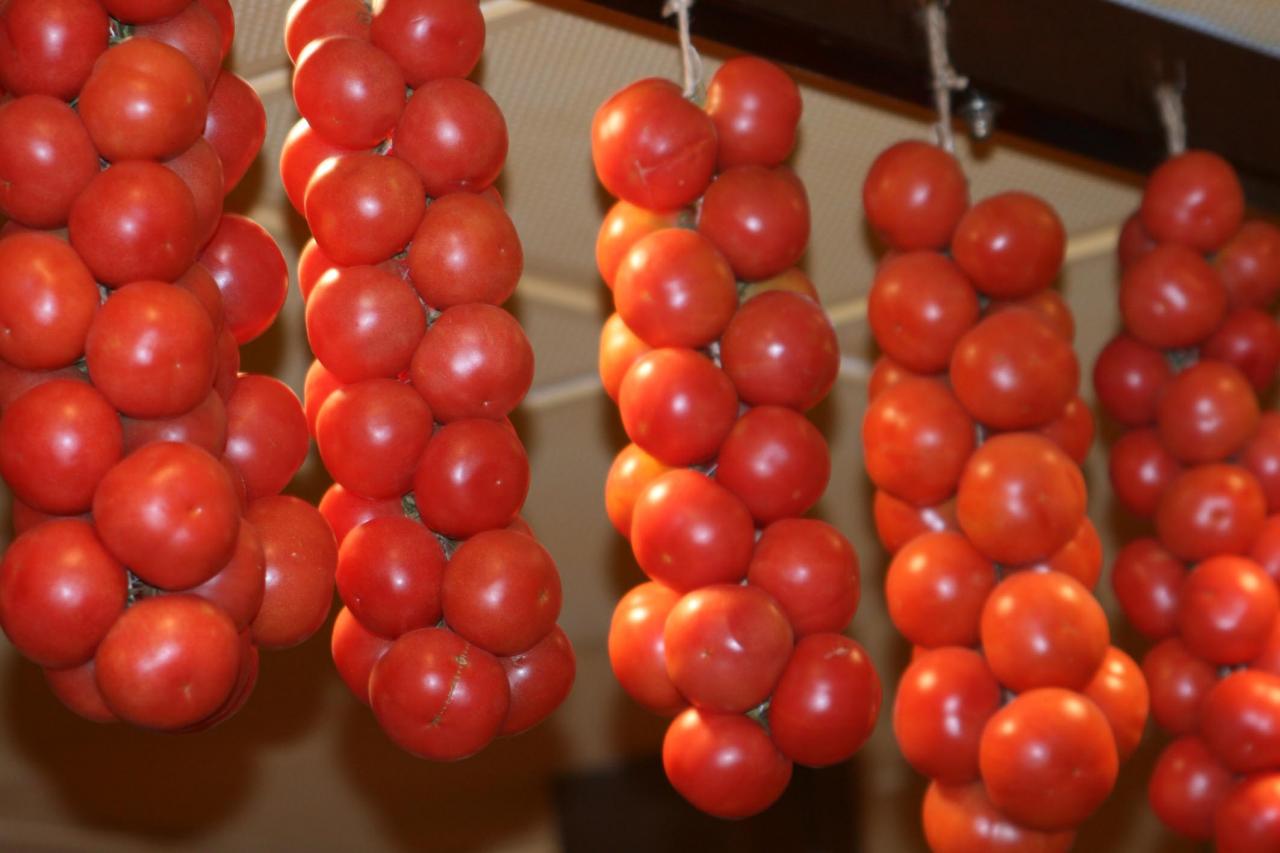 You can make a sofrito in any kind of frying pan or saucepan that isn’t too big for the amount of onions and tomatoes you are using. Many Mallorcan housewives do their sofrito in a traditional clay greixonera, because that is the container in which they’ll cook the other ingredients. Greixoneras can be bought in supermarkets, municipal markets and in hardware shops.

The making of a good sofrito calls for more olive oil than most British people or Americans would use. But you have to be liberal with it because good olive oil is another of the sofrito’s essential building blocks. Buy a virgen extra olive oil such as the ‘hojiblanca’ variety of El Corte Inglés that costs €3.75 for a one litre bottle.

The best sofrito onions are the big white ones called cebolla blanca: they are particularly sweet and mellow. When slowly cooked they soften nicely, another vital quality for the making of a sofrito.

You can make a sofrito with any of the tomato varieties but you will get best results with the ramellet, the Mallorcan cooking tomato sometimes sold in clusters for hanging in the kitchen or pantry.

Ramellet tomatoes are much more expensive than ordinary varieties but the higher price is worth paying because they are pulpy to begin with, so it is easier to reduce them to a jam-like state.

Out and About: Break out the Barbie

Another attraction is that the ramellet is an extremely tasty tomato — one of the qualities that makes it the ideal variety for cooking. You needn’t buy them tied in clusters because they are mainly sold loose — and that makes them somewhat cheaper. 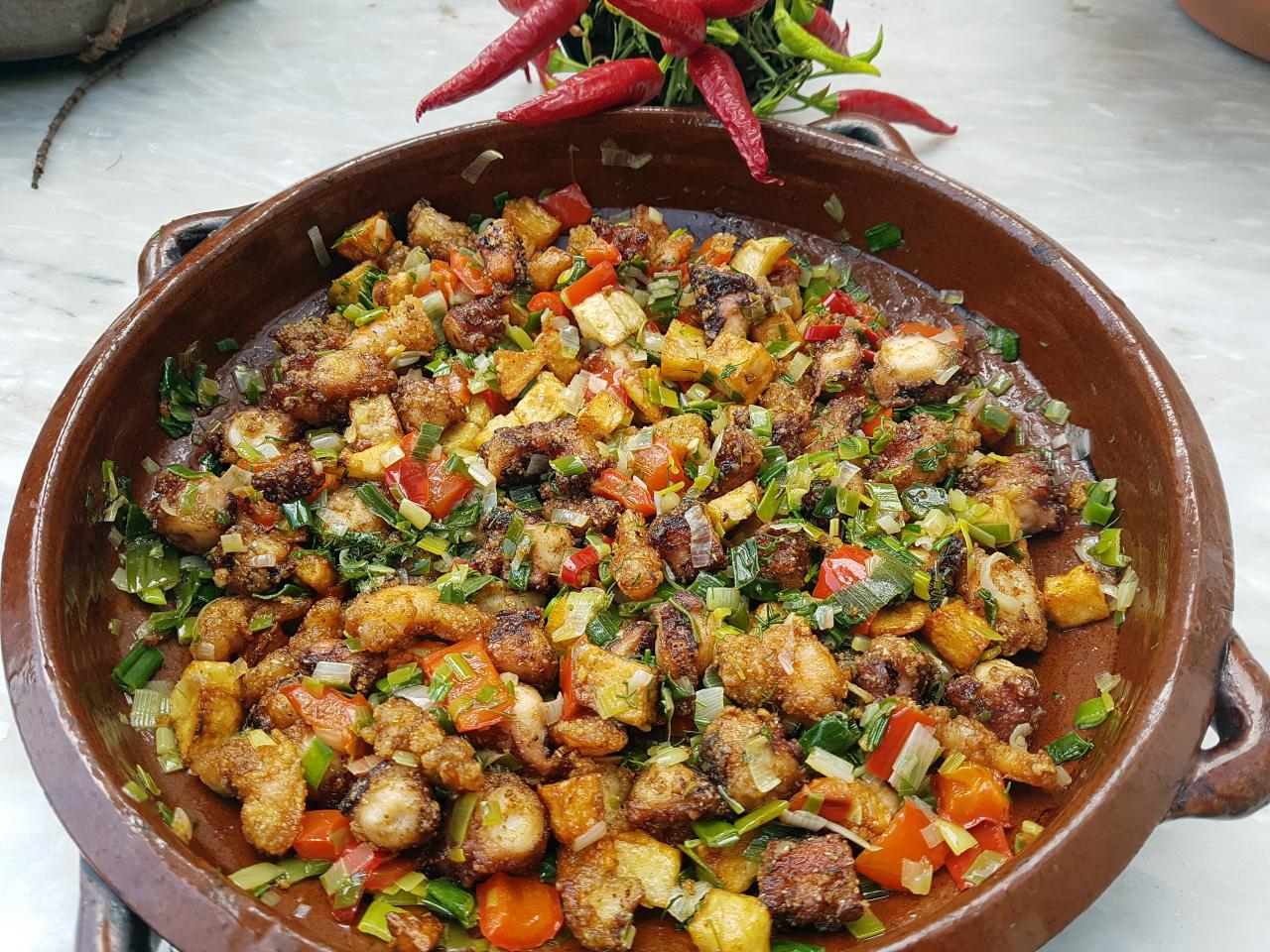 But authentic ramellets are never cheap: if you’re not paying around €6 a kilo then they are not the genuine ramellet variety. The problem is that a major Mallorcan grower flooded the market with a hybrid that sometimes sells for a good deal less than €2 a kilo. Most market stalls and supermarkets sell the hybrids — and even label them as ramellets. It’s strictly illegal, of course, but they do it — and they get away with it.

The genuine ramellets have very thick skins and that helps to give them a very long shelf life. Some Mallorcan housewives buy a couple of kilos and keep them on a pantry shelf in a single layer, and thereby always have them at hand when needed. As the skins are so thick, genuine ramellets must be peeled before use — unless you are making a sauce and the sautéed ramellet flesh can be put through a vegetable mill or a sieve, leaving the skins behind.

Put the frying pan or greixonera on a very low heat. If necessary, use a metal diffuser to keep the heat really low. Add the oil to the greixonera and when it is warm (not hot) add the finely chopped onions. If the oil were hot the onions would cook at a sizzle and your sofrito would be off to a bad start.

Stir the chopped onions in the warm oil with a wooden spoon and sauté them over the very low heat for about 15 minutes, stirring them every five minutes. The onions will first soften, then become translucent before taking on a golden colour. They must never reach the caramelised state and if they burn and blacken you will have to start again. So be sure to keep the heat nice and low and don’t forget to stir them from time to time.

At the golden stage, stir in the finely chopped ramellets. This mixture must also cook slowly, so don’t turn up the heat. After about 15 minutes add a ladle of boiling water. As this water slowly evaporates it will help to produce the necessary jam-like consistency.
A sofrito must never be watery. If it is, the dish you are making will also be watery. So the sofrito must now cook until thick and jammy.

This is the basic sofrito. The recipe you are using may call for fish or meat stock instead of water. Finely chopped spring onions or leeks could also be added to the onions at the start.
Most cooks would add garlic as well as herbs, although the choice of herbs would depend very much on the dish you are making, as well as personal taste. Parsley is the most common herb used in a sofrito.

A recipe could also require a little nutmeg or pepper, or a glass of white wine or sherry. Add the necessary condiments but always remember the golden rule: a sofrito must be cooked very slowly.

And you must always bear in mind that a sofrito is not a tomato sauce. Some people make the mistake of adding extra tomatoes, on the theory that if six small ramellets are called for, 12 will be even better.

But that is not the case, so don’t fall into that trap. A sofrito with too little tomato will actually be better than one with an excessive amount.

When your sofrito is thick and jammy you have the basis of a really tasty dish. It is the first stage of many regional dishes such as paella, sopes mallorquines, stews, soups and potajes. If you use recipes in Spanish cookbooks you will come across the sofrito in hundreds of dishes, so you should learn to do it properly.