For some years Spaniards have been eating less bread than usual. I don’t have any of the current statistics, but sales have been slumping in such an alarming way that the bread industry has had the jitters for some time.

The invasion of the coronavirus, which put us into confinement (this Spanish-French-Italian word is much more precise than the Anglo-American lockdown) should have had a beneficial effect.

People were stuck at home but they could visit bakeries and supermarkets two or three times a day to buy freshly-baked bread — that should have led to more sandwich-making. But it didn’t. People became hooked on takeaways.

Bread-makers, from the mass-production giants on industrial estates to the tiniest bakeries in Mallorca’s smallest villages, didn’t sit back with their arms folded waiting for normality to return.

Instead, they started to tempt us with a wide range of new breads that were different in size and shape as well as in the type of flour. Bakeries and supermarkets have become a bread-lover’s paradise and I have succumbed: nowadays I never buy the same bread on successive occasions, or at the same bakery.

Some of these breads are so delicious you can enjoy them without any kind of topping: they don’t need even a scraping of butter or a blob of jam. Many of them are of a lightness (with sufficient density) to make them ideal for toasted snacks with an enormous span of toppings.

Since the start of spring and the warmer weather, my light luncheons or evening nibbles consist of these toasted snacks plus others such as the Provençal pan bagna which doesn’t even need toasting.

Pan bagna, an integral part of the traditional cooking of Nice, started off as a salade niçoise made with tomatoes, hard-boiled eggs, anchovies, cucumbers, green peppers, spring onions, broad beans or small artichokes, and black olives, to which were added bite-size pieces of hard leftover bread.

It was one of the many Mediterranean dishes, such as Mallorca’s pa amb oli, that were created as a way of using up stale bread: the olive oil and the tomato juices softened the bread and made it deliciously flavourful.

The salade Niçoise was also turned into a more filling dish, which was important when you were a poor farm labourer taking a break from an early morning hard slog in the fields.
But eventually, some old grandmother in the Nice area, thought of adding salade niçoise ingredients to rolls, baguettes or even whole round country loaves, to stifle family appetites when lunch was still a few hours away.

In the old days, when country people in the Nice area were up at first light and headed straight the fields, pan bagna was eaten at around 9am as breakfast, or mérenda, as they say in the local patois. That word corresponds to the Spanish merienda, which is also eaten as a kind of mid-morning breakfast. 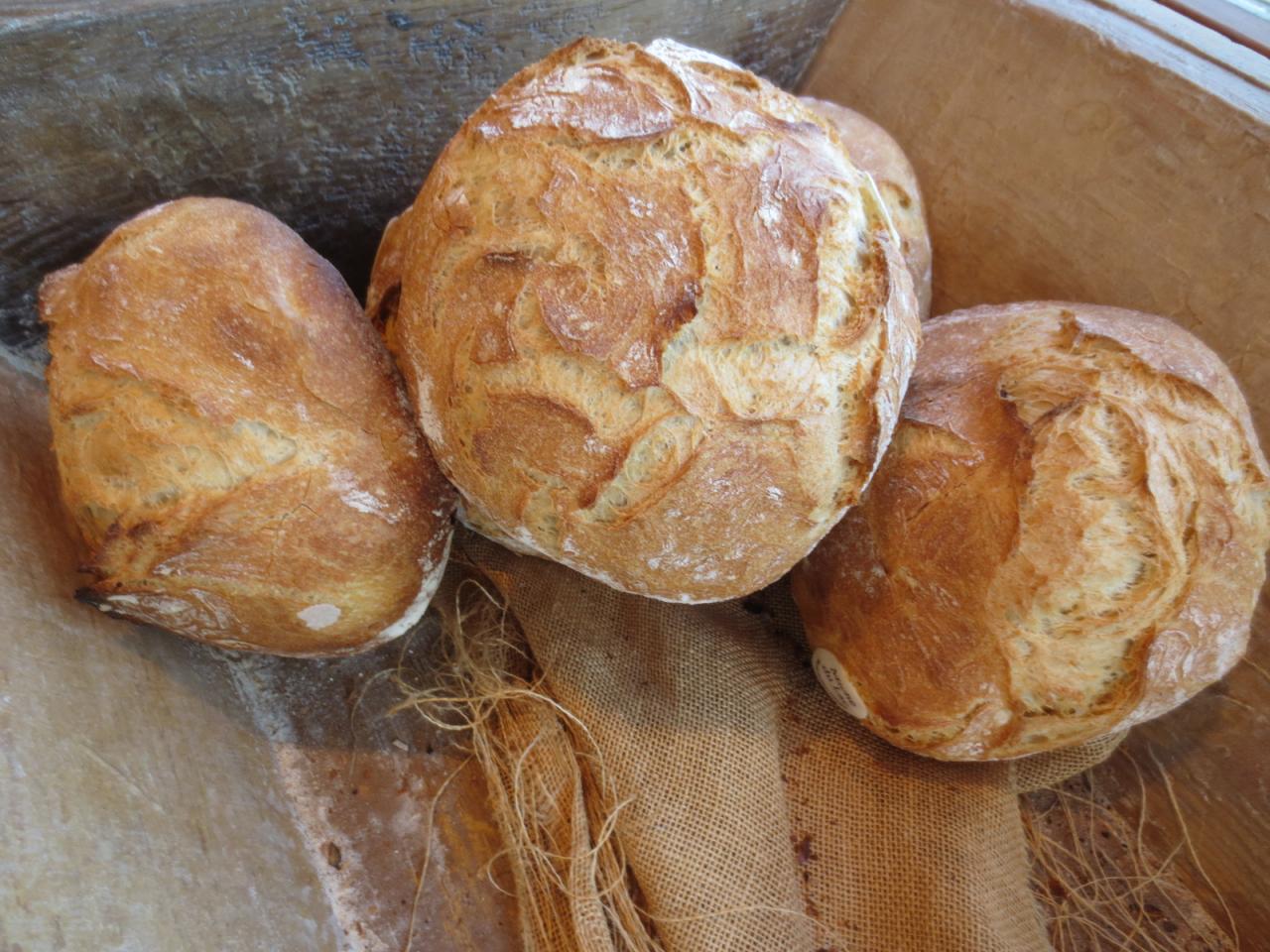 Pan bagna is served nowadays all over France as a starter for a summer luncheon and people in Provence and other southern parts invariably take a couple of them on picnics. They are also a favourite snack for a day out at the beach.

During a game of boules, called pétanque in Provence, play stops at some stage for a pan bagna and glasses of red wine. Men who go fishing in rivers and lakes also take pan bagna and bottles of wine with them. A pan bagna is a sturdy snack that travels well.

The name pan bagna is confusing for some people, including food writers of considerable note. One suggested that bagna comes from the Latin for bath and therefore refers to the bath-like look of half a baguette or French loaf with the crumb removed.

But he obviously didn’t know the name was originally applied to a salad niçoise that contained small chunks of very hard stale bread.

The term pan bagna literally means ‘wet bread’ and it was given that name because, as we shall see in the recipes, the stale bread soaks up a considerable amount of olive oil and juices from the tomatoes and in the process becomes most palatable.

A genuine pan bagna can be made with four kinds of bread: a baguette, an ordinary French loaf known here as a barra, a small round country loaf or a round roll. 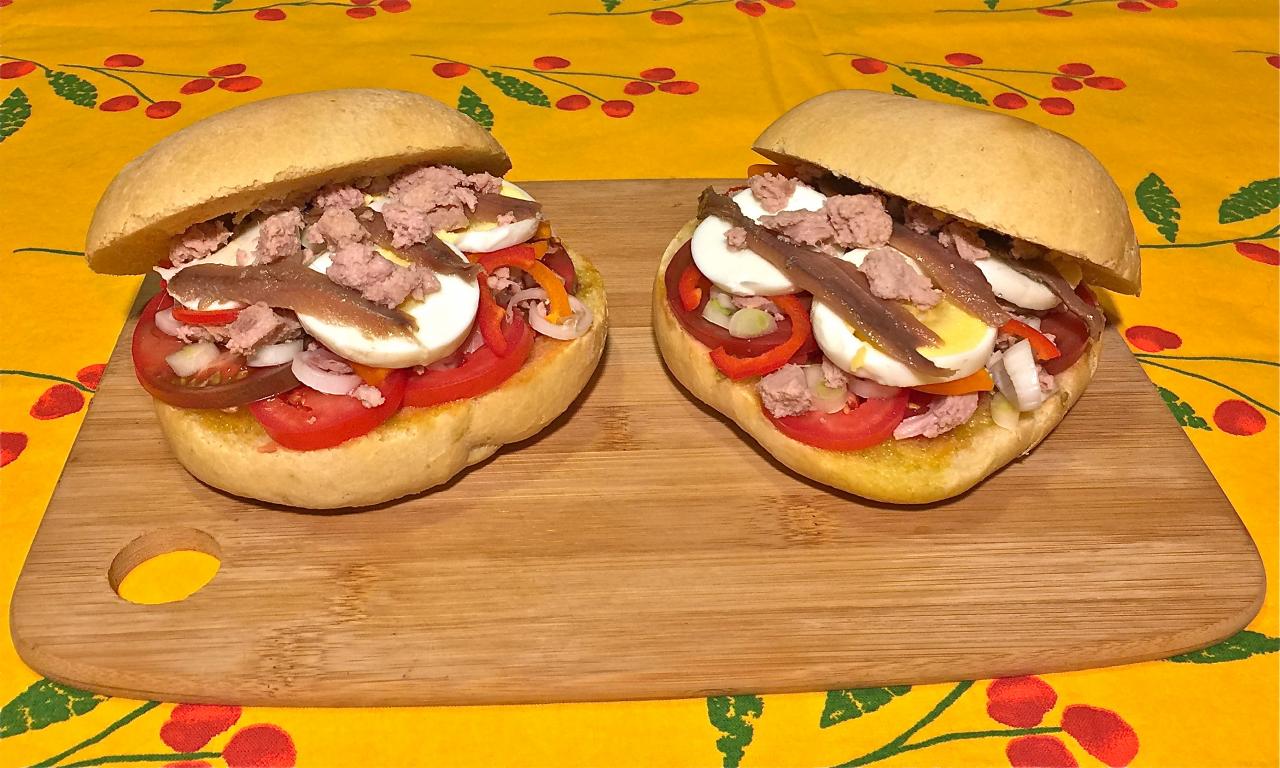 When the modern pan bagna took off in the Nice area, the round country loaf version was so popular that local bakers made one of about 18 cms in diameter as a special container for the ingredients. There are two sizes of Mallorcan country bread, white or brown, that are ideal for this version of pan bagna.

It was Elizabeth David who introduced most British people to pan bagna, first in A Book of Mediterranean Food (1950) and again in Summer Cooking (1955). In her first book she used the alternative spelling of pan bania and she called it a Provençal sandwich.

For one version of pan bagna she wrote: “Cut French rolls in half lengthways. Rub them with garlic. Spread with stoned black olives, pieces of red pimiento, tomato and young broad beans. Pour a little olive oil and vinegar over the rolls, join the two halves together and put them under a heavy weight for 30 minutes.

“Pan bania is served in Provençal cafés with a bottle of wine when a game of boules is in progress. The ingredients vary according to what is in season, or what is available. There may be anchovies, gherkins, artichoke hearts, lettuce. Probably it is the origin of salade niçoise, which is made with the same variety of ingredient but without the bread.”

She got that last part wrong. As we have seen, the salade niçoise came first, then there was salade niçoise with nuggets of stale bread which was called pan bagna and finally there were baguettes and country loaves filled with salade niçoise ingredients.

She also quoted from Recettes et Paysages: Sud-Est et Mediterranée, which calls for one of the long broadish French type barras that some Mallorcan bakeries make. You could also use the broadest barra you can find.

“For four people: quarter pound black olives, half pound tomatoes, a celery heart, 2 oz mushrooms, 1 artichoke, a small tin of anchovies in oil, olive oil. Cut a long round loaf of French bread in half, right through. Soak these two halves first in a little salt water then in olive oil.

“When the bread is well impregnated, on one half put slices of tomato, small pieces of cooked artichoke heart, slices of mushroom (cooked as for champignons à la grecque), celery heart cut into small strips, then the stoned black olives and few fillets of anchovy.
“Cover with the other half of the loaf, put a fairly heavy weight on top for half an hour. Cut into thick slices for serving.”

I started to read A Book of Mediterranean Food when I was 13 and the first dish I made from it (because it was easy peasy) was a patafla, a kissing cousin of pan bagna.
You will need: 4 tomatoes, a large white onion, 2 Italian green peppers (the dark green ones), 50 grs stoned black olives, 30 grs stoned green olives, 30 grs gherkins, a long barra. 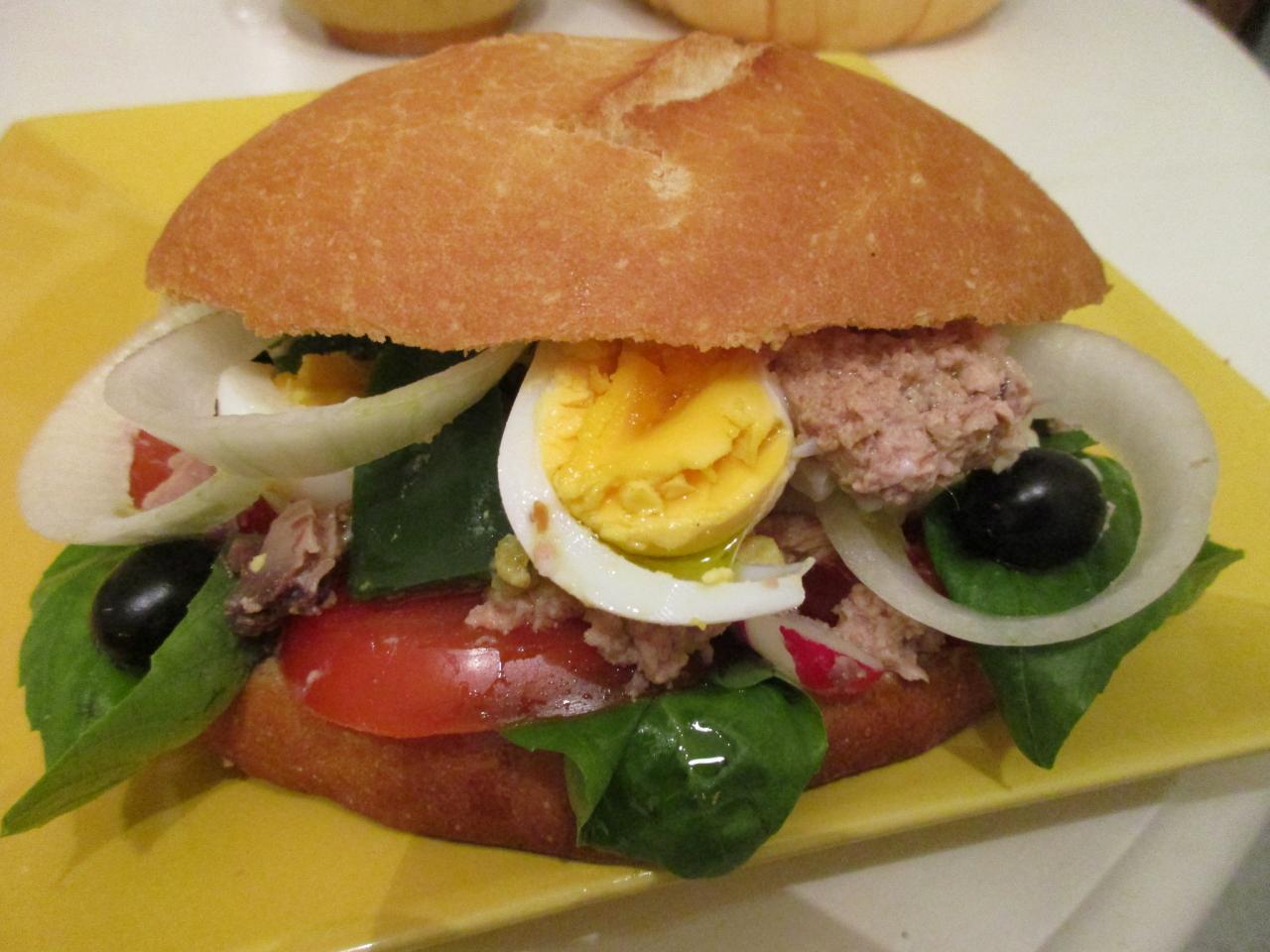 Peel the tomatoes, take the core and seeds out of the peppers and chop them with the other ingredients. Cut the loaf in half lengthways and remove as much of the crumb as you can. If it is a freshly baked barra, this is easily done with the fingers.

Pull the crumb apart and mix it into the other ingredients with a little olive oil, a pinch of sweet paprika (pimentón dulce), plus black pepper and salt to taste.

Fill the halves of barra with this mixture, press them together, wrap tightly in plenty of tinfoil and put the patafla into the fridge until the next day. When needed, cut into slices about half an inch thick and arrange on a flat plate. The patafla is ideal for a summer buffet and as it travels well it is also good picnic food.

Mallorcan bars and cafeterias sell a wide variety of sandwiches made with barras of different length and, mainly, dry fillings such a ham, mortadella and other cold cuts as well as cheese in its multifarious shapes and textures.

Spaniard differentiate between sandwiches made with sliced bread and those based on short or long barras and rolls. Any kind of roll or barra with a filling is called a bocadillo.

You frequently hear and see the word ‘bocata’, a relatively recent term that is synonymous with bocadillo. The term ‘bocata’ was coined in the 1970s when Spanish and Italian film companies did co-productions in Madrid and Rome.

When films are being shot on location in Spain, a constant supply of bocadillos is available at all times of the day. A food truck parked nearby turns them out when needed.
The Italian actors and technicians on the set found the bocadillo word a bit of a mouthful and soon shortened it to ‘bocata’ — easier to pronounce and it even sounded Italian.

For a longish time the ‘bocata’ word was heard only in film studios and on location shoots, but it eventually leaked out into the Madrid social scene, and from there it spread all over the country.

When a Spaniard talks about a sandwich, he means two slices of supermarket bread and a filling. The bread is almost always white and it is usually toasted.

The British Sandwich Association, which represents the ready-made sandwich industry, defines a sandwich as “any form of bread with a filling generally assembled cold…but not burgers and other products assembled and consumed hot.” This definition takes in filled rolls, baguettes, pita, wraps and bagels.

Although the British sandwich is still highly popular, it sometimes comes under threat from foreign invaders such as bagels and croissants.
Even so, Britons spend more than £3,000 million a year on sandwiches and, on average, they eat six chicken sandwiches every second.

But Britons up and down the country aren’t eating the same sandwiches. Chicken salad fillings are popular everywhere and are particularly favoured in Manchester, Sunderland and Birmingham.

Glaswegians prefer the classic cheese and pickle sandwich and people in Leeds go for tuna and sweetcorn. Geordies long for ham salad or ham and mustard and in Plymouth the BLT (bacon, tomato and lettuce) is top of the list. London weightwatchers opt for salmon and cucumber.

With so many people on a healthy eating kick these days and with the sandwich being a convenient lunch time bite or an evening nibble, I think Britons could easily give a big welcome to Mallorca’s pa amb oli.

Is there a Mallorcan entrepreneur out there willing to set up the the invasion of the pa amb olis?